They say you always have a choice and I had chosen. I would fight! I was ready to face life with all its ups and downs. I would follow the path of a warrior, not popular but necessary, as I had been part of the war for years. Every year without fail Harry, Ron and I would fight for our lives. Was I, Hermione Granger, a good person and would I still be good after everything was done and finished? This is my story beginning at the end of the holidays after Year Four (GoF), and in the end you'll have to decide if my actions and my decisions were the right ones! HG with SB, DM, SS and LM; HP will play a bigger role as the story progresses!

Hi, Everyone!
This story is translated from German to English. The original was written by my very good friend, Queenie and I have her permission to translate and post this for her on several archives.
This story is not finished yet, but has been written on for more than 3 years and is, in my opinion, the longest German fanfiction ever written. And as long as Queenie is here, she will finish this story, as she promised her fandom.
At the moment we are on a weekly update schedule and I will inform you about any changes in the chapter notes.
This story will earn its explicit rating so be aware of any themes mentioned in the tags. 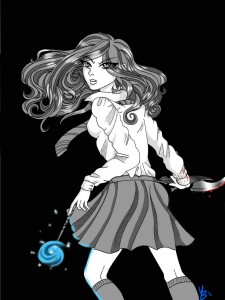 Darkness, nothing but darkness surrounded me. Not only the darkness of night -no - life itself was filled with darkness. I lived in dark times after all, unfortunately. I had realized and accepted this fact faster than the others, as it was often the case. That was why I stood here in this damned alley and tried, despite the darkness, to blend in further with the shadows.

I pulled the hood of my black robe far down over my face to avoid any chance of being recognized. I was hurrying towards my goal with purpose, walking over the worn cobblestones like all the other disguised shapes. No one here was interested in anyone else because everyone had something to hide.

Tonight I would implement the first part of my plan. Afterwards, I could begin to carry out the rest of my life plan, step by step. It was not going to be easy, but when was this ever the case?

He - the embodiment of ultimate evil - had been on our heels since our first year at Hogwarts. Now that he was back a lot was about to change.

I still felt awfully sorry for him, as Harry had been chased by him from the very beginning. And then Harry had played a major role in His reincarnation. He had been cast in the lead, as it was his blood that made the reincarnation of Voldemort possible. As for me, I would not be Hermione Jean Granger if my brain had not kicked in as soon as Harry had reappeared from out of nowhere with Cedric's dead body in his arms.

Yes, I was sad, even devastated by the events, but I never took the time to allow myself to grieve. In the end, it did not help in any way and it certainly would not bring Cedric back from the dead. I still could not grasp it. Cedric, the good and handsome Hufflepuff, was no longer among us.

Later that evening in the hospital wing Harry had given Ron and me a summary of everything that took place in the graveyard but I could not allow myself to mourn. I had to spring into action! He had gathered his loyal followers around him and would soon be getting back to his old strength and that was the reason I was standing here at midnight in Knockturn Alley, trying to become one with the darkness. A new era had begun now that he had returned. Nothing would ever be the same. It would not be like the past fourteen years! Our time of peace and our quiet life was irrevocably over!

Now was the time to prepare to fight. The war was coming. Time was running out and I was willing to use as much of it as I could grasp. A smile appeared on my lips as my thoughts wandered towards anyone who could claim to know me. I imagined how all of them, the Weasleys, the professors, the other students, their parents and Harry would have a heart attack if they knew where geeky little Miss Gryffindor roamed about at this time of day.

In this alley, you could get everything your heart desired if the price was right.

Anyone who dared to venture into Knockturn Alley knew that they walked on forbidden, illegal ground and also knew the consequences. I was aware of that as well and I was ready to take the risk because I knew I would never get what I desired the legal way. Indeed those who believed they knew me well for years did not, in fact, knew that I was nowhere near as good, dear, naive, and compliant as they thought.

My grin became downright nasty. I knew how to conduct my questionable activities under the cover of darkness, often late at night and always in secret. NO ONE ever noticed me. If they ever found out they would be truly shocked by my actions because in people's perception Harry and Ron were the two driving forces behind our shenanigans. They were the ones who started the dangerous and forbidden actions, not me, the prim and proper Miss Know-it-All.

But not even Harry and Ron knew about my activities inside Hogwarts. They did not have the smallest clue about what was going on and I would bet my right hand that they would not approve. But enough of that, I needed to continue further, way deeper into the alley. I tried to move as discreetly as possible. I could not suppress a little shiver for the environment was too surreal, too squalid. Here was the vermin of the magical society - thieves and murderers. It was a dangerous path to tread. The vermin felt so comfortable here that it was as unsafe in the daylight as it was during the night. The dark alley, which was bigger than one would have thought, was showcasing everything Diagon Alley offered but with a broader variety and what I saw in the displays fascinated me very much. I would return at another day or night when I had more time to spare. I could really use some of these products.

I carefully moved towards my target. Since I had never been here, I allowed my senses and my research to lead the way. I had been planning this excursion for the past two weeks and yesterday I had prepared myself explicitly for this late night shopping spree. I did not want anything left to chance. It was way too dangerous. Although, in the last few years, I had shown that I attracted danger as well as adventure and I loved it; otherwise I would never have developed such a close friendship with Harry Potter, who was a guaranteed magnet for such situations.

Yes, carrying on alongside Harry was good practice. But to be able to cope with these situations alone and on my own, and to be successful - that required careful planning and preparation...