He’s loved her since he first laid eyes on her, but her heart belongs to a ghost.

Alistair wasn't meant to make the sacrifice to end the Blight. It was Solana's duty, her purpose. But he did, and he died. For 10 years she wondered Thedas with no will to live and no duty to die by. Then the sky split open.

The Inquisition is the only power trying to set things right. Solana is surprised to discover her dear friend Leliana is its spymaster, but not as surprised as she is to discover her old Circle crush, Cullen, is leading its forces.

The last time she saw him, he begged her to slaughter a tower full of mages.

Cullen has been suffering his PTSD and lyrium withdrawal in silence, seeking nothing but a chance to atone. Then *she* arrives. Can she ever forgive him for what he became?

Zulefandom is in the process of making audio editions of this story using text-to-speech software. You can find the first chapter here and subscribe to the channel for the rest: https://youtu.be/-9UQnmdLlJU

This series is set during Inquisition. It does however touch on events that happened (or might have happened) in all three Dragon Age games and reference a couple of facts revealed in the books, so spoiler alert!

This is not a game retelling. Some of the missions will be from the games but I hope to offer unique perspective for those. Mostly I leave the game heroics to the dashing Inquisitor.

There's a tiny bit of canon-divergence. The main point of departure from canon is that the Hero was not involved in the events of Awakenings, which means she shows up on the Inquisition's doorstep. Her presence alters some key events.

General warnings: THERE IS A LOT OF ANGST *Ahem* I mean teen rating so nothing overly graphic, but there are general sexy times, violence and a bit of swearing.

Other content warnings will be provided in the notes of individual chapters. If you identify something that I didn't warn about but I *should* have, I am more than happy to edit. Just let me know your suggestions. 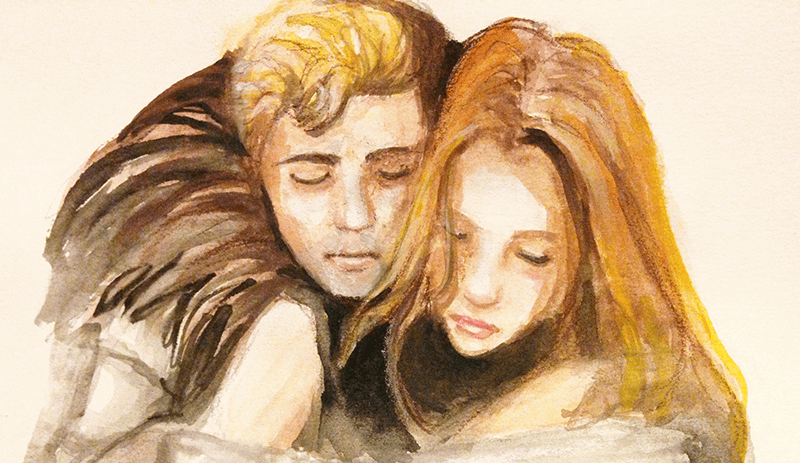 A chill wind swept across the Frostbacks, catching the Warden’s hair and stinging her cheeks.

Not that she was a Warden anymore.

Not that she was anything anymore, she thought grimly as she tugged her cloak tighter around herself.

She’d enjoyed being nothing. Perhaps enjoyed was the wrong word. She hadn’t hated it. She hadn’t felt anything. Drifting across Thedas like a spirit, helping small villages when she could in exchange for shelter on the coldest nights, sleeping mostly in caves and abandoned ruins. It wasn’t much of a life, and it wasn’t much of a death. It was somewhere in between.

How many years had it been?

Time had passed in a wash of days and nightmares, bleeding into each other. She’d stayed far from cities – in the cities they might recognise her face.

They’d called her the Hero of Ferelden before she’d left.

But outside of the cities, there was nothing to mark the passage of years. There was no harvest, no festivals, no Chantry songs catching on the breeze and telling you another week had gone. And what did it matter?

Her sacrifice, her purpose, had been stolen.

Once, they had spoken of it. Close together in her tent, skin against skin. Alistair had said, “You know I’d marry you if I could?”

And he had grinned at her, eyes shining. “You would?”

Why had he never understood that she loved him as much as he loved her?

“We don’t know what will happen when we reach Denerim. If they still want to make you king…”

“I know.” His expression had sobered as quickly as if she’d struck him. “And as king I may… well…”

“It’s alright,” she’d assured him, regretting bringing up the subject. I know. I understand. “I’m a Circle Mage and a Grey Warden. At least I’m not an elf.”

“Ah, there, you see. I will be sure to mention that. At least she’s not an elf.” He’d smiled wistfully, taking her hand in his. “You should rebuild the Wardens. They need you.”

“I know almost nothing about being a Warden.”

Then he’d kissed her and later, when the first sounds of dawn indicated it was almost time to part, he'd said, “I’ve only been a Warden three months longer than you, you know?”

“Yes, but you spent time with other Warden-“

“No, wait, hear me out. It’s not about that.” He’d taken her hand again, and stared down at their entwined fingers as if considering his next words carefully. “Eventually we’ll hear the Calling. I told you.”

“Thirty years.” He’d explained that it would take three decades for the taint to overwhelm their blood.

“Twenty nine now.” The wistful smile, and his eyes locked firmly on their hands. “I’ll wait for you.” Then he’d looked up and the intensity in his gaze had stopped her breath. “Let’s make a pact. No matter what else happens. When we hear the Calling, we come together again and we die, side-by-side.”

Except he hadn’t died by her side.

He'd died that night, atop that tower, tired and bloody.

“I can’t let you do this!” she’d cried, staff at the ready. She’d been preparing for the sacrifice since they’d entered the gates and she’d seen Riordan fall to his death. In truth she’d been preparing since the night before, since she’d discovered that a Warden had to strike the final blow and give their life with it. If it came down to her or him, it had to be her.

She’d kissed him on the steps, overcome, knowing it was the last opportunity.

I can’t let you do this… she’d been ready to cast.

But he was Templar-trained. She’d forgotten that. He could suppress her magic.

And so he’d suffocated her spell and run forward with his sword. He was stronger and faster and by the time she knew she’d failed, he’d already pushed the blade hilt-high into the beast. And she’d tried to run to him, convinced there was some mistake, convinced she could undo it.

Wynne had held her back. That frail old woman, with nothing but a spirit and her own willpower keeping her upright, had found the strength to hold her back from the blast. It had saved her life. It had felt like betrayal.

And now she heard the Calling.

Now she heard the Calling and where was Alistair? Was he waiting for her in the Fade? Was he beside the Maker, as the Chantry prayers had promised? Or did the taint prevent that? What happened to a Warden when they died?

The thought of the Deep Roads had returned to her now that her usual nightmares had taken on a more urgent tone, now that she heard the drum beat that signaled her end, a dissident chord that rang constantly at the back of her mind.

Only one thing stopped her from heeding that dark summons. It hadn’t been 30 years.

She wasn’t sure how long it had been, but she’d seen her reflection not more than a week ago. Yes, there were slight crow’s feet at the edges of her eyes, but other than that her skin was smooth, her hair was still a bright sunset red.

She looked at her hands again, pale from the cold. No wrinkles.

Either it had not been 30 years, or she had discovered the secret to eternal youth in her travels without even realising it.

So what did it mean? Another Blight?

Another Blight, another chance to make her sacrifice.

She didn’t know how she felt about that. It felt a little better than nothing, and also a little worse.