1977: He had overheard Potter and Black whispering about it in the library, but he would never admit to getting such a good idea from the Marauders. As if those two buffoons had the wit and discipline necessary to become Animagi! No more than a handful of witches and wizards in a generation mastered the transformation. But if Severus Snape had anything to say about it, he would be among their number.

He had overheard Potter and Black whispering about it in the library, but he would never admit to getting such a good idea from the Marauders. As if those two buffoons had the wit and discipline necessary to become Animagi! No more than a handful of witches and wizards in a generation mastered the transformation. But if Severus Snape had anything to say about it, he would be among their number.

The process was complicated, involving months of study, research, and mental focus. All information explaining the magic behind the transformation was housed in the Restricted Section of the Hogwarts library, and even once he managed to get his hands on the relevant books, Severus found their authors to be a tight-lipped bunch. It seemed to him that they were intentionally vague about the process, writing about their accomplishments merely to boost their own reputations, while keeping the actual process cloaked in mystery, in order to maintain their elite status, and prevent others from joining their ranks. Eventually, however, through a combination of dedication, deduction, and a few lucky guesses, Severus was able to puzzle out the necessary steps.

The first and most obvious step was to discover one's true animal form, which required no little skill at Divination. Severus had only ever taken the class in hopes of discovering whether his future included Lily Evans, and had dropped it after OWLs and the end of their friendship, but he had learned enough in three years to find out what he needed to know. The same shadowy shape appeared to him over and over again in the crystal, the tea leaves, and in the configuration of the lines on his palm.

The rabbit. An excellent form. Fast, silent, easily concealed, and common enough that its presence would excite little comment. Always in the visions, the form was overlaid by the outlined shapes of parchment and quill, but Severus dismissed that as a quirk of his own studious nature. He imagined himself as a sleek, dark hare, watching from the shadows, learning the Marauders' secrets and plans, and turning those discoveries against them. Revenge for their attempt on his life would be his at last, and it would be sweet.

Once he had discovered his animal form, the next step was to collect the key ingredient for the spell: twingeberries, gathered by the light of the full moon for maximum potency. It took him almost a month to discover a clump of the elusive berry bushes in the Forbidden Forest, and when he found them, the berries were still hard and green. They had a sharp, bitter flavour, and wreaked havoc with his digestion, but he dutifully chewed and swallowed them nonetheless, concentrating on his animal form: what it meant and what it felt like to be the rabbit, and to will it into being out of his own flesh.

Severus had the will. He would show those marauding nitwits what true wizardry was. Once he had achieved the transformation, the Wizarding world would stand in awe of him. Powerful people would take notice. He would have the respect he deserved, and the admiration he secretly longed for. Perhaps Lily Evans would even forget their differences and realise that he was a person of consequence, not to be dismissed lightly.

It took weeks of disciplined concentration, focussing all his attention and energy inward in every private moment he could arrange, trying to find the beast within and draw it to the surface.

Finally, one Saturday afternoon in late spring, it happened. While his fellow students were lounging around the Hogwarts grounds, enjoying the beautiful weather, Severus secluded himself in the Slytherin dormitory, eyes closed, resolutely chewing twingeberries and thinking lapine thoughts.

Suddenly, the world dropped away from him. His eyes flew open in surprise as he landed on the stone floor with a soft thump. Everything around him was huge. He could hear the sounds made by tiny skittering things inside the walls. He had done it! He was an Animagus. Severus gave a small hop of triumph and ran to the dormitory door, nosing it open. Now was his chance to try his hand -- or rather, paw -- at the stealthy art of spying.

In the Slytherin common room, he found a boy sprawled on his belly in front of the empty fire grate, black hair falling into his eyes, writing feverishly in a notebook. Regulus Black. Severus hopped silently up beside him to see what he wrote. At first, he thought it was a diary entry -- Regulus was often teased by the other Slytherin boys for his habit of keeping a diary -- but then he saw his own name cross the page.

His lips found mine and our tongues battled for dominance. As usual, his won. "Severus," I moaned, desperate for his touch….

Regulus was writing a story. A love story about the two of them. Severus was so startled that he almost lost control of his form. Shaken by the feelings expressed in Regulus's passionate scrawl, he turned and fled the common room, leaving the boy to his writing. So focussed was Regulus on his work that he never noticed the rabbit.

Severus did not stop hopping until he reached the safety of the Slytherin boys' toilets. Huddled beneath a sink, tiny heart fluttering, he tried to comprehend what he had just witnessed. He had not known that the younger boy regarded him with anything other than fear, but this --

A sound from one of the stalls made Severus's fuzzy ears prick up. Someone was there. Cautiously, he hopped closer to investigate. Peering under the door of the stall, he found Gilderoy Lockhart, one of his yearmates, having a furious wank. His eyes were closed and his lips moved silently, one hand tangled in his blond curls. Severus watched, nose twitching in contempt, until the boy cried out, "oh -- oh -- I ship it!" Severus had no idea what that meant, but he scurried quickly away before Lockhart could notice him.

He had made it out of the Slytherin dungeons and into the upper castle before voices approaching down a corridor forced him to take shelter in the shadows. A moment later, Headmaster Dumbledore and Professor McGonagall, the Transfiguration mistress, came into view.

"You know, Minerva," said Dumbledore as they strode past Severus's hiding place, "you've given me the most marvelous idea for a story. A ball, like you described, with everyone looking their finest. And a king and queen of the ball, chosen from Slytherin and Gryffindor, to promote inter-House unity. Why, even two people who despised one another might find love, if the circumstances were right."

"An interesting idea, Albus," McGonagall replied. "But it need not be a king and queen. Perhaps two princes struggling towards true love would make a more compelling story. I'm sure the subject matter would be nearer your own interests, Headmaster," she added with a wink.

Their voices faded as the two professors turned a corner. Severus detached himself from the shadows feeling confused and slightly nauseated as he bounded through the entrance hall and out into the castle grounds.

Staying out of sight and hiding behind clumps of delicious-smelling clover and large stones, Severus kept his long ears pricked up for snatches of interesting conversation. He spotted a group of giggling Ravenclaw girls near the castle steps and hopped closer to discover what they were laughing about.

"... and she's the most beautiful girl who's ever been to Hogwarts -- part elf and part veela. She has black hair with streaks of purple and silver, her eyes change colour when she's sad or angry, and she has a great body -- curvy and really thin. James Potter and Sirius Black are both in love with her," the girl -- a fourth year named Louisa Chambers -- finished triumphantly, casting a simpering glance towards a group of four boys lounging near the lake.

Severus could not recall seeing anyone resembling the bizarre girl Chambers had described at the school, and could not even imagine what such a person would look like, but the Ravenclaw girls had pointed him towards his intended targets, for which he was glad. His tiny paws were beginning to ache with all the hopping.

Silently, he crept over to where the four Gryffindor boys sprawled near the lake, and hid himself in the shadow of a nearby bush. He pricked up his ears, listening intently, whiskers twitching with dislike. Soon all the Marauders' secrets would be his to exploit.

"And then," said Peter Pettigrew, "when we all grow up, you marry Lily --" Severus saw James Potter grin lazily at this suggestion, and ground his pointy teeth together in loathing. "-- and Moony and Padfoot get married, too, and maybe Maddy agrees to marry me, and we all have lots of babies, and someday they all fall in love and get married too, and then we would all be one big family!"

Sirius Black whooped with laughter, and Remus Lupin sprayed the pumpkin juice he had been drinking out over the lake.

Potter made a gagging noise. "Wormtail, that is the worst idea for a story I've ever heard."

Lupin wiped his mouth with the back of his hand and raised an eyebrow at Black, who lay on the ground, wheezing with helpless mirth. "Padfoot wouldn't want to spoil his girlish figure with unsightly stretch marks."

Slytherin's arse! thought Severus, shaking off the disturbing mental image. Is this all people talk about when I'm not around? Writing twisted stories about one another?

A piercing shriek interrupted his thoughts, and he whirled to see that the Ravenclaw girls had discovered his hiding place. They squealed and pointed, with wide eyes and hands pressed to their mouths.

Lewis pressed the back of her hand to her forehead in a theatrical swoon. "It's the cutest widdle bun-bun I ever saw! I could die just looking at it!"

The five girls bore down on him, hands outstretched, making cooing and clucking noises. Severus broke and ran, streaking towards the gardens behind the greenhouses, pursued by cries of dismay and disappointment. He waited there, trembling under a cabbage leaf, until the danger had passed, then made his way stealthily back into the castle, taking extra care to remain unnoticed.

Only when he had attained the quiet of his deserted dormitory did Severus feel safe enough to transform. But before he did, he hopped over to the looking glass to see himself, and that was when Severus Snape beheld his one true Animagus form for the first time: a tiny and very fluffy white bunny. 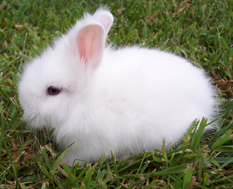