The Rule of Three

In order to make their relationship legitimate in the eye of wider society, alphas Chris Argent and Peter Hale have to claim an omega. Stiles Stilinski, who should be the solution to their problems, instead turns out to be the first piece in a puzzle that some elements in society would prefer remain unsolved.

I wasn't sure how to tag this one, so here's the warning re mental health issues. Stiles is being medicated against his will by an abusive government department. The way his mental illnesses are addressed is in no way representative of people with the same diagnoses, because in this world Stiles has been intentionally misdiagnosed and the drugs they give him are not what they say they are. At one point Peter forces him to take these "meds" because he thinks Stiles needs them, when this is not the case. 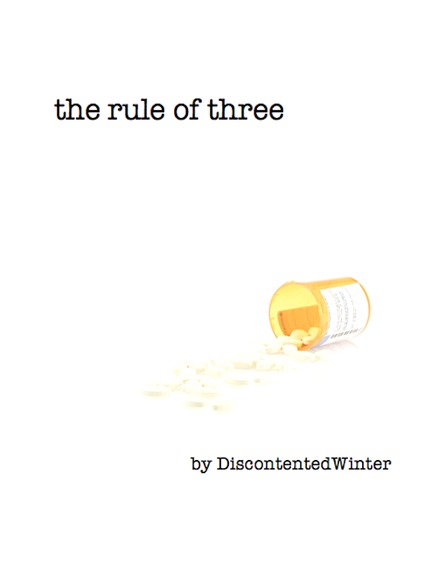 “You disgust me, Chris,” his father says, and it’s pretty much how Chris knew the conversation would go. It’s bad enough in his father’s eyes that he’s divorced Victoria, but to take up with another alpha? That’s the unforgivable sin. Particularly since Gerard Argent has built an entire political platform on traditional family values. Good old fashioned bigotry mostly, but it’s made him a very popular and powerful man. He’s not going to let Chris take that away from him.

Chris had known that the moment he walked into the room, but it doesn’t stop the sting that is the fantasy of his father’s approval being ripped away from him and torn to pieces. Chris has been looking for that approval most of his life, if he’s honest, and he’s never really had it. Not when he knew this whole time that he was lying to both of them. Even when he’d mated with Victoria his father’s proud smile had hurt more than anything, because Chris had known the truth. He’d looked across the reception hall and caught Peter Hale’s gaze, and felt a jolt of guilt and shame and lust all wrapped up in one, even as he’d leaned in to kiss Victoria.

He’d been seventeen when Chris had mated Victoria. Just a cocky kid with a swagger and a smirk, and Chris had been so drunk at his stag night that he didn’t remember a lot about what had happened. He remembered a bathroom stall, he remembered his fingers tugging at Peter’s hair, and he’d remembered the way his sweat tasted as Chris had licked a path across his collarbones.

The first time they fucked, Victoria was pregnant with Allison. She’d been heavy, sated, and the air was thick with her omega scent. And Chris had gone out one night, met up with Peter in a cheap hotel room, and fucked and been fucked. Two alphas. Two abominations. He’d been sick with guilt and shame after it happened, but not sick enough to stop it from happening again.

Peter Hale was a force of nature. Chris couldn’t ignore him anymore than he could ignore a hurricane.

A part of Chris doesn’t care. The other part of him, the part that will always be the boy craving his father’s approval, wants to drop to his knees and beg for forgiveness.

The only reason he doesn’t, probably, is because he knows it wouldn’t make a difference.

“I didn’t do this to hurt you,” Chris says at last, holding his father’s gaze and willing him to hear the truth behind the words. “This is who I am.”

Gerard stares at him for a moment, then picks up his glass off the desk and downs the contents. “I’m eight months out from an election, Chris. I can’t have my son in an alpha/alpha relationship. We need to make this right.”

For a moment Chris is tempted to laugh. “Aren’t I a little old for one of those conversion camps you champion?”

Gerard is silent for a long moment, as though he’s seriously considering it. Then he turns away again, pours another drink from the decanter, and takes a sip. He doesn’t offer Chris a drink. When he turns back, there’s a gleam in his eye. “You’ll take an omega mate.”

Chris’s stomach sinks. Has Gerard heard nothing he’s said in here? “No, that’s not—”

“For appearances,” Gerard says. “You and Peter—” He almost growls when he says the name. “You’ll take an omega mate. Share it.”

“It’s not ideal,” Gerard says. “But it’s not without precedent. More importantly, I can work with it, and nobody needs to know my alpha son takes it up the ass.”

Of course that’s what it’s really about. The fact that in a relationship with two alphas, one of them must play at being the omega. It’s bullshit, but it’s a prejudice Chris doesn’t have the energy to protest. Not today. Not with his father. Not when he’s already on the thinnest of ice.

“You do that,” Gerard says, mouth downturned. “You do that, or you’re no longer any son of mine. Do you understand?”

Peter takes the news as well as Chris knew he would.

“Are you kidding?” he demands, wrenching his tie from around his neck when he gets home to their apartment and Chris breaks it to him. “Are you fucking kidding?”

“It’s not ideal,” Chris says, and hates how his father said the exact same words.

“Not ideal?” Peter asks. “Twenty fucking years I’ve waited for you, waited for you to be ready, to—” He stumbles over what Chris thinks was probably a variation of waited for you to man up, and he drags his fingers through his hair. “To want to be with me more than you wanted to keep that poisonous old bastard happy, and this what you want? To bring someone else into our home? Into our bed?”

There’s a very fine line between wrath and devastation with Peter. There always has been. Chris has learned over the years to read it very well.

“Peter, you know what will happen if we go against him in this.”

Peter’s mouth thins into an angry line, but he doesn’t answer. He knows.

She’s eighteen now and Gerard is paying for her tuition at Columbia. And that’s $66 000 a year that Chris can’t afford. It was difficult enough for Allison to accept her parents’ divorce. To lose her future on top of that? Chris wouldn’t blame her if she never forgave him. And he’d promised Victoria that Allison’s happiness was still his top priority, and that nothing would change that. He can’t go back on that promise.

“Just think about it,” he says, his throat aching. “Please, Peter.”

Peter storms out of the room.

It’s Saturday morning and Chris is working on his motorbike in the parking garage of the apartment complex when he spies a pair of high-heeled boots heading toward him. He sits up and drops his wrench back in his toolbox. “Kate.”

His sister raises her eyebrows as she stares down at him. “Trouble in paradise, big brother?”

“Nope.” Chris wipes his hands on a rag.

“Bullshit,” Kate says. “You only ever work on that stupid bike when Peter is freezing you out.”

Unlike his father, Kate can say Peter’s name without growling, but she’s no particular fan of his. The Hales are an important family in Beacon Hills. They’re in local politics, rather than national like Gerard, but they attend a lot of the same local events. Talia Hale, Peter’s sister, is mayor. Her husband is the superintendant of the health department, and one of her other brothers is in charge of public works. And her daughter is a local deputy. You can’t cross the street in Beacon Hills without running into a Hale. Chris grew up going to the same events, even though their families are on different ends of the political spectrum.

“What do you want, Kate?” Chris asks, climbing to his feet.

“Cut the crap,” Chris mutters, pulling the garage door closed and locking it. The garage is his workshop. He and Peter park their cars in the street. They’ve talked about getting a house when everything was official. They’ve talked about a lot of things, except in the past three days when they haven’t talked at all.

“Fine,” Kate says, following him toward the elevator, her heels clicking on the concrete. “I’ve got an omega for you.”

Chris’s blood runs cold. “Peter hasn’t agreed to anything yet.”

“I know,” Kate says. “That’s why I’m here.” Her expression softens. “Just let me come up and talk to you both, okay?”

“Katherine,” Peter says, because he knows she hates it. “How lovely to see you.”

Chris rolls his eyes at him, and Peter almost smiles. Chris feels a jolt of wary pleasure, and wonders if maybe Peter has forgiven him.

“Hello, Peter,” Kate says, setting her handbag down on the kitchen counter.

“Can I make you something for brunch?” Peter asks.

Kate blinks at him, and takes a fraction too long to answer. “No. Thank you.”

And there it is, Chris thinks. Her automatic reaction to an alpha in the kitchen. Which is ridiculous. Most of the world’s best chefs are alphas, but an alpha cooking in his own home? Somehow that’s emasculating. Cooking is omega’s work. Chris doesn’t blame Kate for her reaction. It’s ingrained in her, like it’s ingrained in too many people. It doesn’t help that Kate works for the Department of Omega Welfare. It’s a state authority, and Kate is the director of the Beacon Hills office.

“Coffee then,” Peter decides, and crosses over to the machine.

Chris and Kate sit at the dining table in the breakfast nook.

Peter sets a coffee down in front of Kate, and then one in front of Chris. He squeezes Chris’s shoulder on his way back to collect his own.

Peter’s steps falter, but he sits down at the table with them. “The idea I still haven’t agreed to, Christopher?”

“That’s the one,” Chris tells him.

Peter curls his lip. “Let me guess. A docile little breeder who’ll pop out a kid every year and wouldn’t say boo to a goose?”

“No,” Kate says. “I mean, I’ve got the perfect omega for you.” She looks at them one by one. “I’ve got a seventeen year old ward of the state who is about to be aged out of the system. He’s been diagnosed with Schizoaffective Disorder, Attention Deficit Disorder, Oppositional Defiance Disorder, and Dissociative Identity Disorder.”

Chris looks at Peter just in time to see his jaw drop.

“I don’t even know what most of the words you just said are,” Peter tells her.

Kate’s teeth gleam when she smiles. “What they are is a damn fine reason nobody will ever want to breed from him. Which makes him perfect for you. And he’s on such a cocktail of drugs that all he does every day is sit and stare at the wall. He can feed himself, take himself to the bathroom, and shower himself. All you need to do is clear out a guest room for him, make sure he takes his meds every day, and you’ll never even hear a peep out of him.” She shrugs. “It’ll be like having a pet.”

Kate reaches across the table and puts her hand over his. “Just think about it, okay? Both of you. You know… You know Dad is friends with your landlord, right? And your lease is coming up next month. Just something he happened to mention last night at dinner.”

It’s a threat. Not from Kate, even though she’s the one delivering it. It’s a threat that Gerard can make their lives hell, and that’s long before he even thinks about Allison’s tuition.

Peter doesn’t talk to him for another two days.