Harry Potter and the Thief of Knockturn Alley 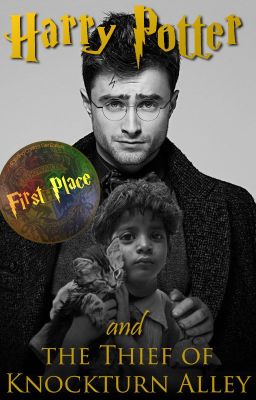 Eleven years after the fall of Lord Voldemort, the children of the second wizarding war are starting their first year at Hogwarts.

Kuro is an orphaned street urchin, raised as a servant by a death-eater and abandoned on the streets in Knockturn Alley. After an unfortunate run-in with a famous auror with a lightning scar, he is sent to join the collection of misfits headed to Hogwarts to start their magical education.

This story follows several new students, including Teddy Lupin, through their first year at Hogwarts. It is meant to satisfy anyone looking for another Harry Potter and the Sorcerer's Stone in a canon compliant sequel to the original series, particularly those of a Hufflepuff persuasion.

Chapter 1: The Boy who Survived

It was a day of celebration unparalleled in the history of magic. The Dark Lord was gone. Not just defeated, or banished, or captured, he was utterly and completely destroyed.

A shadow that had hung over the wizarding world for over twenty years had passed. Magic folk of all kinds were hesitantly trying on the thought of Lord Voldemort being gone for good. As the sun rose, wizards that had been hiding from the wrath and power of Voldemort and his Death Eaters stepped tentatively into the light for the first time in months. Owls streaked through the sky carrying confirmation across the country that the dark times had ended. The hidden places where magic folk dwell began erupting with triumphant song. Glasses were raised high in celebration of the Dark Lord’s defeat, and of the one who slew him.

By early afternoon, revellers had taken to the streets, too jubilant to be contained indoors. They caroused through the streets, collecting stares and admonishment from the non-magical people they encountered. Those muggles hadn’t the tiniest notion of the disaster that had just been averted. Their quiet mundane lives would go on unchanged. That fact was joyous enough to bring many wizards out, shaking hands and sharing great praise of the victory, leaving a confounded trail of muggles in their wake.

By dusk, wizards of all stripes had found friends, family, and old acquaintances and were gathering for the largest celebrations in living memory. Everyone was full, at last, of hope and joy and thoughts of a bright future, all thanks to the death of Voldemort at the hands of the great Harry Potter...

Deep beneath the muggle-filled streets of London, in the deepest secret chambers within the ministry of magic, three grim figures failed to celebrate. They wrapped themselves in the shadows of the dimly lit, glassy black stone corridors for both the safety and comfort it offered. Together, they swept silently through the darkened hallways.

“There can be no doubt this time?” asked the first in the line in a whisper. She was a thin, frail, young wizard, with neatly cropped brown hair and silver-rimmed spectacles. Her eyes darted between her two seniors, as if they might have some hope to offer.

“I am sorry, young Beatrice,” croaked the eldest of the trio. His face was lopsided and sagging, scars he still carried from the first wizarding war, and he leaned heavily on a staff as he hobbled through the dark corridors. “There can be no doubt. Our Lord is dead. Utterly destroyed. We are ruined a second time by that fool child, Potter.” He spat at the name.

“What are we to do then, Master Roche?” Beatrice demanded. “Abandon all we’ve accomplished? Run and hide like rats?” Her voice echoed angrily off the polished black stone. “Now? When we’re so close to a breakthrough?”

The third broke his silence. “All that matters now is our own survival. We shall take what we have learned and pass it on. Our Lord may have fallen, but our cause still lives. We shall rise again.”

He was an immaculately kept man. He was clean shaven, tall and handsome. He carried himself with grace and confidence befitting his post as the Minister of Monster Affairs. His face, pale and unblemished, hid all emotion from his compatriots. “Now, let us wipe clean the evidence of our work, and part ways.”

“You are of course, correct, Phineas,” Roche agreed sullenly. “I had hoped that I would not have to return to hiding. I am too old for a life of exile.”

“There will always be those that will remember your contributions, Master Roche,” Phineas consoled the old wizard. “You shall not want for comfort.”

“You forget, young Phineas,” Roche growled, “I have been through this before. You will soon find your allies have forgotten all about you. Loyalty to the losing team is not highly regarded.”

They came to a halt outside one of countless unmarked doors within the labyrinthine corridors beneath the ministry. Just like every other door, this one was sealed and locked, openable only by those that knew the passphrase. Each pulled a wand from beneath their robes, pointed to a different spot on the door and chanted in unison, “Creatura!”

The solid iron door melted away and drained through the floor exposing the laboratory behind. It was a maze of beakers and benches and tubes which crisscrossed the cavernous chamber with a spiderweb of luminous liquids of every color. Lining the walls were glass jars great and small, holding a menagerie of monsters, each magically frozen in time. At the far back of the laboratory stood several large, complex and delicate looking devices holding their active experiments.

With grim determination the three strode into the room and began to dismantle the apparati, reducing the components to ash.

Beatrice had begun erasing their notes. “Atramentum vanesco,” she whispered as she tapped each scroll and tome, drawing the ink from the parchment into her wand, leaving the pages clean and blank.

Phineas strode the the darker depths of the laboratory. There stood a dozen containers surrounded by glowing crystals and etched with ancient runes, each with a web of tubes feeding into them. He surveyed their contents with great disappointment. Each one contained a malformed and misshapen monstrosity lying lifeless within.

He destroyed each in turn until a noise coming from the ninth apparatus stopped him. He peered through the hazy glass porthole to find something quite alive. “Roche, Beatrice, you should come here for a moment.”

The three stared at a small child that kicked and cried within the incubation chamber. It appeared in every way to be a living, newborn male human baby. He had dark brown eyes, dark, mottled skin, and a tiny wisp of hair that made it look almost like smoke was rising from his head. His slightly too large eyes wandered between them, looking for warmth and comfort and it began to cry for food.

“He survived the process,” murmured Beatrice reaching in to comfort the baby. “This changes everything!”

“This changes nothing,” scolded Master Roche. “We are still exiles. There are too many who know of our loyalties and our work. It matters not if the child survived, it will be years before he is old enough to prove whether our experiments are of any worth.”

“Quite so,” agreed Phineas, thoughtfully. “And I intend to see this through to its conclusion. I will take the child and in due time we shall see if we were truly successful.”

“Our cause is dead!” fumed Roche, his hoarse voice echoing grimly around the cavernous laboratory. “What can one boy do?”

Phineas was deathly calm. “One boy can do a great deal. Our Lord was once one boy, was he not? And wasn’t it one boy who ruined us? This child could help us rise from the ashes, but only if we allow it the chance.”

Roche calmed somewhat and fixed Phineas with a judgemental stare. “There are risks,” he warned.

“I am well aware,” interrupted Phineas, meeting the old wizard's gaze with cool confidence. “I shall be careful.”

Beatrice snickered condescendingly. “You intend to raise this child on your own, Phineas? I didn’t think you the fatherly type.”

Phineas scowled. “I am not, and have no desire to be. I am a dedicated researcher. This creature may be the first successful result of two generations worth of work. Tests must be run, information gathered.”

“You’re going to make a terrible parent,” she chided.

“I am not its parent,” Phineas retorted. “I am merely its caretaker.”

“I could help,” she offered.

Phineas and Roche exchanged glances, sharing something secret between them, and they both moved to put an arm over her shoulder.

“It’s best if you don’t, child,” replied Roche, turning his wand on the young witch.

Beatrice reached to draw her own, but it was too late.

“Immobulus!” Roche croaked. A swirl of darkness extended from his wand and bound Beatrice in place, frozen like a statue on the spot.

“What are you doing?” she managed to ask through a locked jaw.

The old wizard, holding her tight in his spell, patted her head with uncharacteristic kindness. “We’re protecting you, child,” he said. “You need not live in hiding like us. Your ties to the dark lord are not so well known. This is your reward for your service and loyalty.”

Phineas turned to look her in the eye and placed the tip of his wand to her temple. “I’m sorry Beatrice, but it is much easier to trust that you will not expose us,” he said as he began to draw away ghostlike strands of memory from her mind. “If you do not remember us. I may also need some of your knowledge for my work. It is more valuable to me than you now.”

Two years of her life were drained from Beatrice’s mind and poured into a small coiled seashell in Phineas’ palm. When he was finished, he cast a spell to put her to sleep and said in a voice as reassuring as baying wolves, “I promise to keep them safe.”

A rustle of robes and shuffle of booted feet echoing down the corridor outside interrupted the two dark wizards. People were approaching and they were unlikely to be allies. “Take the child and begone.” hissed Roche. “I shall finish dismantling the lab.”

“I shall contact you when it is safe,” assured Phineas.

“Begone!” repeated Roche as he began to incautiously conjure a rain of devastation to burn clean all evidence of their work.

Phineas grabbed the child roughly from its incubator and fled from the room. He ran out into the labyrinth of corridors, away from the approaching interlopers, and into the night.