This story is a romance between young James T. Kirk and Spock Prime. I have tagged it as a May-December romance so please make note of that if that is not your thing. This takes place after the events involving the destruction of Vulcan by Nero. This story is character driven so don't expect some exciting action adventure plot. It will be updated by spreadsheet like most of my other work unless the muse strikes me or stalls on something else.

Chapters will be mostly in Spock Prime's point of view unless inspiration hits me for Jim. 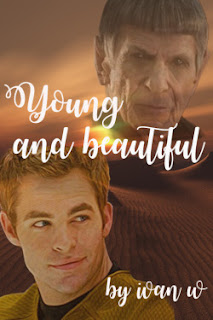 As you can see, I have a new cover for this story from my friend, Blue_Meets_Green as I asked her for one that would reflect a younger Jim than the original cover she did for me. She came through for me with flying colors! Thank you my friend.

I looked at the door in surprise when the knock sounded. I had not been expecting anyone. In fact, it had been several days since my last visitor.

I set his teacup on the table and rose from the sofa in my small house. I yanked down and straightened my robes as I made my way to the door.

“Jim,” I exclaimed, certain I could not hide my surprise.

Jim Kirk, young and beautiful, and flashing a fabulous smile that warmed my innards, stepped into my house without waiting to be told. Somehow that did not surprise me.

I closed the door behind him, glad indeed to find young Jim here. I had not expected to see him again. And I’d accepted that with no little wistfulness.

“What brings you to New Vulcan?”

Jim shrugged. “I had some time before the Enterprise is due to depart. They made me a captain. Promoted Pike.”

“I am aware. I saw the ceremony where you were promoted.”

“I observed from a location above the arena, just before I departed for New Vulcan.”

“Certainly not. How long will you be here?”

“I thought maybe a week. Figured I’d play it by ear. The Enterprise won’t be headed out for another week or so after that. After Nero, she needed repairs.”

“Indeed. Where are you staying?”

For the first time, Jim’s smile faltered and I saw the vulnerability in those saturated blue eyes that were unlike the honey colored eyes of the Jim I’d known.  But certainly beautiful and striking.

“I thought maybe I could stay with you,” he said hesitantly.

Though I was surprised, I acquiesced immediately which had him brightening again.

“Did you bring a bag?” I asked, since I saw none with him.

“Yeah, it’s outside. Didn’t want to presume or anything.”

He went out to get the luggage and I could not help but wonder what brought him here. There was much I did not know about this Jim. He was perhaps softer and harder than my own at the same time. And yet…I found myself eager to learn about him.

“You did not want to spend the time before you depart with others?” I asked. I was thinking of my young counterpart or Dr. McCoy.

“Nah. Most everyone else is busy. And I sure as hell don’t want to do the family thing.”

“You do not get along with your family?”

Jim snorted. “That’s an understatement. Where can I put my stuff?”

It was fortunate this small house had two bedrooms, I thought, as I led Jim to the unoccupied one. I had not expected to have a houseguest but the idea of this particular one was most definitely not unwelcome.

“Certainly not. You can do as you please while you are here.”

“Thanks.” His smile was warm. “It’s nice to feel welcome somewhere.”

I went back out to the living room and kitchen area to give Jim time to settle into his room. I decided to go to the kitchen to see what I had to prepare as far as food. A food synthesizer had been installed in the home, but whenever possible I preferred to make meals with fresh ingredients.

I was aware Jim did not share my vegetarian habits but buying fresh meat would not be possible on New Vulcan. For any meat, it would need to be synthesized. I was aware most humans found Vulcan dishes rather bland. I knew my own captain had, though, I was unsure what to expect out of this one.

When I went to check on Jim, the door of his room was ajar. The shower had stopped some time ago. He had been silent for a while which I suspected was unusual for him. I did not want to disturb him if he were in the middle of something but as soon as I peered in through the opening of his door, I froze.

Jim, hair damp from his shower, stood in the middle of the room wearing only his briefs. And they looked as though they had been painted on him. He was turned away from me, with his back to me, and his rounded bottom. My gaze unexpectedly zeroed in on that particular asset.

It had been a number of years since I had been sexually active. Not because the drive or ability was no longer present. But rather I did not find anyone particularly interesting to spark my sexual arousal. That seemed no longer to be the case.

Jim was beautiful. I knew he was fair of face and I suspected he had a young attractive body under his clothing but now I had irrefutable proof and it made my mouth water.

Suddenly Jim turned around, apparently becoming aware of my stare.

There was a definite smirk on his face. And humor in those striking eyes. But also a lot of warmth.

I knew I had to tread carefully. So I kept my answer safe. “You were quiet for some time so I wished to check on you. It was not my intention to disturb you.”

“Are you perhaps hungry? I was going to make dinner.”

He smiled, flashing perfect teeth. “Sounds good. Let me just get dressed and I’ll be right out.”

“There are robes in the closet if you prefer something less formal,” I advised him before turning away from the temptation.

It really had been too long.

I had to get myself under control as I was acting as though I was some hormone laden teenaged human. I shook my head at my own fallacies. I poured myself tea and began to prepare dinner.

Jim suddenly appeared and I had to admit to myself I was startled how little noise he had made. He hadn’t seemed to be particularly subtle in his movements in our limited acquaintance, but I realized perhaps I needed to readjust my assumptions.

I was pleased when he came back out dressed in one of the robes from the closet, a pale cream robe that was especially soft. He had it tied at the waist but his throat and chest was bare to about his upper abdomen. He looked so young my heart yearned.

“Thank you. Most of the homes on New Vulcan have this appearance. It was easier than creating individualized dwellings.”

“I can synthesize coffee for you if you would like. I am afraid I do not have any to make fresh.”

Jim smiled again. He smiled easily, I noticed, but there was often a touch of sorrow behind it. It was a fascinating combination. “Whatever you have honestly. I’m the one invading you.”

“I assure you I do not view it as an invasion.”

I was a little surprised to see the pinkness to Jim’s cheeks and to realize he was blushing. A blushing Jim Kirk? Unique indeed.

I handed him the replicated coffee without thinking. I’d made it like my Jim used to take it, cream and sugar, and realized my mistake as I handed it over. But he simply took it, sipped it, and then nodded. Jim didn’t even question it.

Jim shrugged a little. “I don’t think so. In his mind I’m a dirty cheater or something.”

“You speak of the Kobayashi Maru.”

“Yeah.” He took a large swallow of his coffee. “I bet the Jim you knew passed.”

“But his methods were the same as yours.” I paused. “Or perhaps I should say your method was the same as his.”

“He reprogrammed the test?” His blue eyes blinked in surprise.

“He did. And got commended for original thinking.”

Jim snorted. “Figures. I get brought up on charges and he gets congratulated. Welcome to my life.” He sounded quite bitter.

“Maybe. Maybe not.” Jim cradled his coffee cup in his hands. “Anyway, thanks for letting me crash here. I probably should have let you know I was coming, but, well, it was kind of spur of the moment.”

“It’s fine, Jim. It is a pleasant surprise.”

His face lit up with a smile. “Yeah? Good. I’ll try not to get in your hair too much. I brought my PADD and I’ve got work to do. I’m sure you do too what with rebuilding the colony.”

“Indeed. But it will be nice to have a companion.”

“Yeah, I really like the idea of being your…companion.”

The spoon I picked up slipped from my hand. I was not so usually rattled and it disturbed me that he had such an effect on me. He did not seem to notice though as he pulled up a chair to the table and sat down.

I brought my tea over to the table and sat next to him. I had already put dinner, which consisted of vegetarian pasta, in the oven, so I had time to spend just sitting with Jim.

Jim was staring at me intently. “You’re not really like him. And I know I said that already. It’s just…I guess I expected there to be universal similarities.”

“I mean more than your dad’s name was Sarek and your mother’s Amanda.”

“Yes. We are both half human. We both struggle to be fully Vulcan.”

“Let’s not talk about him. I’d rather hear about you.”

“I should not reveal too much.”