A late night phone call between Miss Quill and the Doctor. Because they're more alike than it may appear on the surface.

(Doctor Who/Class crossover set after 'For Tonight We Might Die'. Text+Podfic.)

A/N: Spoilers for Class pilot 'For Tonight We Might Die'. 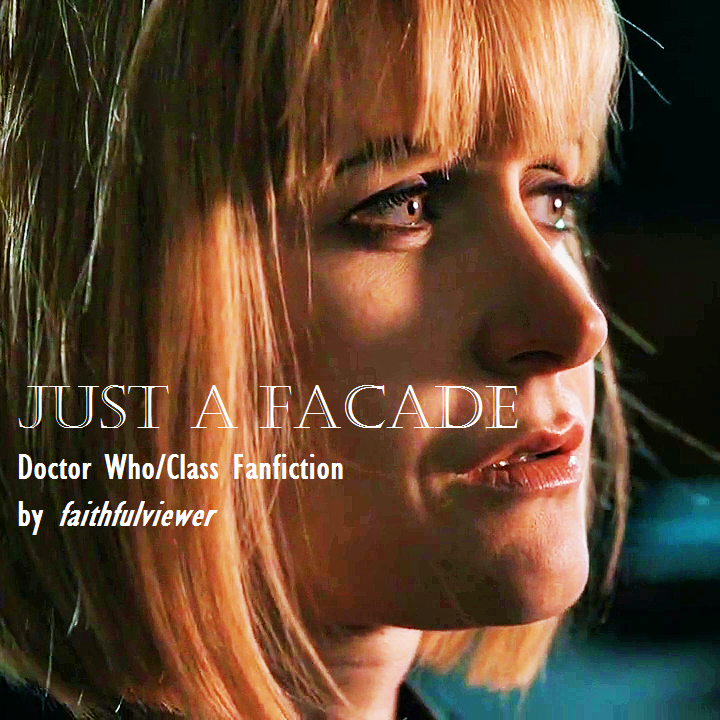 Miss Quill collapses on her bed, the sound of the door she's just slammed still resonates in the empty room, amplified by the silence of late night. She feels the weight of the universe on her shoulders, but she's unable to bring herself to sleep – not after the events at the Prom.

Her head is spinning, drunk on sugar, but she still grabs the chocolate bar on the bedside table and angrily bites off another large piece of it. Chocolate, one of the few decent things on this stinking planet. That, and cats. Wonder how she could get by without them on Rhodia. Oh well, yeah, she had a reason to live back then.

Still, the dizziness that chocolates gives to her weary brain, unused to such a large sugar intake, can't delete the rage, sorrow, and resentment that boil inside her veins.

She had a chance to get rid of the king of the Shadow Kin and she lost it. She discovered that her only hope to get her long awaited revenge is just a useless, empty cabinet. The one man who could give her a lift away from this stupid planet forced her to protect a bunch of disgusting children, as if being a slave to the person she hates the most weren't bad enough. That damn Prince, the reason of all her troubles, the only person who could ever understand what she's going through, and the last one she wants to talk to. The loneliness of her condition never fades from her consciousness.

But, underneath it all, worse than anything else, there's guilt. A feeling of guilt so sharp and corrosive for killing that student. She used to be a freedom fighter. She had values and ideals. What has she become? Tricking children to do her dirty work for her.

Yet, even when she's completely alone in her room, she can't allow herself to drop the facade. She wipes a tear away from her cheek, frowns, and resumes her cold detachment. She lies down on her bed and takes out her phone. Oh dear, she's assimilated that human habit of always checking mobile phones, she's going native. But tonight not even pictures of human genitalia can cheer her up.

The Doctor's number is still showing at the top of her call history. She's tempted to call him again and give him a piece of her mind. After all, she hasn't even thanked him properly for rescuing her. What a great gift he's given her.

Anger and fury take control of her thumbs, and she presses the Doctor's number on the screen. She taps her fingers ferociously on the sheets as she waits for him to answer, then he finally picks up.

"What is it now?" the Doctor complains from the other side of the universe. He leans against the TARDIS console and balances the receiver between ear and shoulder while pulling some lever.

"What have I done to deserve this?" Miss Quill whines, frustrated.

"Excuse me?" the Doctor stops the TARDIS rotor and grabs the phone receiver with both hands, giving her his full attention.

"I don't deserve this," Miss Quill repeats in her usual sarcastic tone. "Okay, I might have lead an army into battle, and I might have even caused the death of an innocent student, but seriously Doctor – guarding a bunch of children? Give me a Shadow Kin any day."

"Don't you see the irony of this?" Miss Quill laughs viciously. "All my life I've fought for freedom and what I get? No free will at all. No choices. No options. I can't abandon the Prince, I can't stop protecting my master even if it means sacrificing my own life, I can't leave this planet, and now you put on me another responsibility I do not want and I certainly do not deserve."

The Doctor bites his thumb, considering her words, then utters bluntly, "What do you think you deserve, then?"

"Not on my watch," the Doctor growls back.

"All my people have been killed, Doctor. My whole family. I just want to avenge them, so they can finally rest in peace. But you don't understand. You will never understand," Miss Quill says. But she can't say the whole truth. She can't tell the Doctor that planning the revenge of her people makes her feel still connected to them. It makes her feel less lonely.

"Are you kidding me?" the Doctor scolds her. "You think I don't know how it feels to be tempted by revenge and genocide? I've seen realities where my whole species was killed, where I killed them all, and I've fought so many wars, so many battles, doing worse things than you could ever imagine. So don't you dare say I don't understand."

Miss Quill gnashes her teeth in silence, she can hear the Doctor frowning through her phone. But then he suddenly smiles.

"Actually," he adds, "I'd even go as far as to say that you and me, we are pretty similar."

"We're nothing alike, thank you very much," Miss Quill replies.

"No, really. What you're facing now, I've been through it all," the Doctor asserts. "When I was so much younger, I was stranded on Earth as punishment, and I discovered that it could be quite a lovely place. I committed genocides and I won't allow anybody else to live with such a stupid, horrible decision. I've tricked people into taking their own lives even if I can't bring myself to fire a gun. Been there, done that."

Miss Quill squints and listens carefully, her defenses dropping just a bit. "That doesn't mean you have the right to decide on my life," she blurts out angrily under her breath.

"It means I know better," the Doctor shrugs with a long sigh. "It means I know that you will adjust to your new life and you will find new reasons to live. It has happened to me countless of times, despite my resistance: hope always returns. And if you just accept this simple fact, if you pick a cause worth fighting for, then there's a tiny chance that it will make you kinder."

Miss Quill shifts on her bed and tighten the grip on her phone, trying not to let his words infect her, but failing miserably.

"During my travels," the Doctor continues, "I've met so many amazing humans, I've shared my journey with them, and they've infused in me some of their humanity in return. So many selfless, resourceful, brave humans."

He pauses, takes a long breath, then says in a sadder tone, "There was one of them, quite recently. Clara Oswald, she was called. I don't remember much of her – the reason it's quite complicated – but even when my memory fails me, she's always in my head. All that she's taught me will never leave."

He starts to wander off, absorbed in his thoughts as in a state of trance. "She was a teacher at Coal Hill school, exactly like you. Well, not exactly – she was an English teacher. But maybe that's why I brought you to Coal Hill. Never thought about it, suppose it was some sort of subconscious kicking in. Probably I thought that staying at Coal Hill would make you a bit nicer and a bit kinder, as she was."

The Doctor ruffles his grey hair and surfaces from his thoughts, returning to focus on more pressing matters. "I know you're a warrior, I know. But you're not technically evil. If I didn't see any good in you, I wouldn't have rescued you, don't you think?" he specifies. "The point is, Clara made me a better person. Before her, I was cold, detached, grumpy, trying not to get emotionally involved, pretending I didn't care. Remind you of someone?"

"I acted like that," The Doctor explains, "just because I knew how much emotions can and will hurt, how terrible it is to lose people you love, and how terrible it is to lose yourself. But after Clara, I feel like I'm a bit lighter. A bit more open to people, more prone to show mercy. Now I won't give up on something until I've tried everything and I won't turn my back. I don't remember how she made me change, but I know it was through her kindness. I know I changed because I cared about her. I had a duty of care and I protected her with all my strength."

Miss Quill interrupts him, annoyed by how his speech is making her feel. "What does this have to do with me?" she asks.

"Everything," the Doctor smiles. "Because being part of a team of humans defending the Earth will only do you good. Weren't you paying attention while I was speaking before? You will help those amazing children, but – more importantly – those amazing children will help you. They will teach you more things that you could imagine, and maybe in the end you will stop protecting them just because it's your duty and your punishment, and you will start protecting them because you genuinely care about them."

"Whatever you say," Miss Quill replies abruptly, unable to hold the conversations any longer. "It's not like I get a vote anyway, is it?"

"Give them a chance, Miss Quill," the Doctor concludes. "Let them help you."

Miss Quill ends the call and throws her mobile phone on the pillow, distancing herself from it. The Doctor's words resonate in her head as she tries to ignore them. She dives for the chocolate bar next to her, but then decides she's had enough. Tea. That's all she needs, a good cup of calming tea, the third and last decent thing on this dump planet. Just the thing for healing her aching brain.

She gets up and reaches the door, but as soon as she steps outside Charlie appears to block her way.

"Were you talking to someone in there?" he asks her. "Are you all right?"

"It's none of you business," she utters in a hostile tone. She moves on towards the kitchen leaving him behind, then suddenly a pang in her chest makes her stop and turn back to face him. "Go to sleep, you have an awful lot of homework to do tomorrow," she tells him.

"I wouldn't if you hadn't assigned so much reading," he replies naively.

"I have such few pleasures in life and torturing my students is one of them," Miss Quill smirks. "Don't you dare take that away from me."

She leaves him and enters the kitchen, then grabs the kettle abandoned in the sink and puts it on the stove. And while she waits for her tea to be ready, she starts considering that, yes, she hates the domesticity of her new life, but maybe there are some human habits she could get used to. Maybe she could even start to tolerate those stupid children she has to protect. Maybe revenge can wait for tonight.

Author's Notes: I conceived this fic the very moment Miss Quill said "Run!" to April in perfect Doctor fashion. She reminds me of early Twelve a lot at times. Do you see any analogy between the Doctor and Miss Quill? Let me know what you think of this story in the comments, hope you enjoyed it. Thank you for reading.