You might have read the first chapter as part of my Word Soup collection. Basically I decided that this needed more chapters. It will be light on the plot, heavier on the smut.

Let me know in the comments if there's anything you want to see!

** I should also add that this won't be updated as regularly as my other fics. This is just a place for the kink-inspired Sterek one shots to come and live.**

Inspired by this gifset.
I tried to link to the creator, but apparently I still can’t work Tumblr. 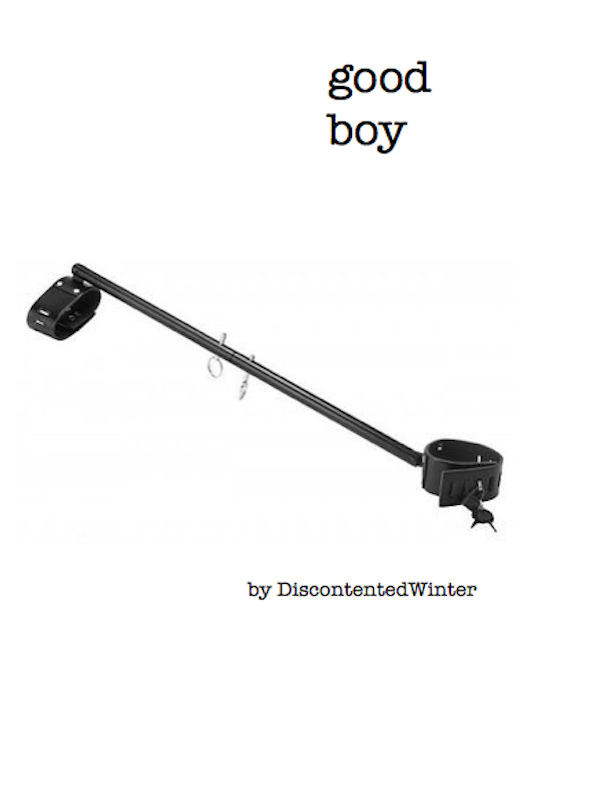 Stiles wrenches around, almost dislocating his wrist. He winces in pain and in embarrassment, and then tries his best to look casual. Which isn’t that easy to do when one wrist is handcuffed to his dad’s desk.

It’s Derek Hale. Of course it is. Only the hottest deputy ever, and—although Stiles will never admit it—the reason he’s been hanging around the station so much this summer. Because Derek Hale is just so fucking hot. There’s hot, and then there’s Derek. Words are inadequate. Superlatives fall short. He’s just pure fucking perfection. Just ugh. Derek does things to Stiles’s admittedly scant self-possession and ability to successfully adult when he’s around, and turns him into even more of a gibbering idiot than usual. He also does things to Stiles’s dick.

“Could you remove the cuffs?” Stiles asks, his face burning.

“No.” Derek Hale has a smile like sin. All the hot, dirty sins Stiles wants to commit. His smile is a thousand watts of pure fuck me, fuck me hard. At least that’s all Stiles can think when he sees it.

“Dude,” Stiles says, and then slumps against his dad’s desk. “Really?”

Derek steps into the office. He’s changed out of his uniform, and he’s in his street clothes. That fucking leather jacket. It’s screwing with Stiles just as much as its owner. Last night Stiles stopped at a red light behind a guy on a motorbike, and got an erection. Stupid Derek. Stupid Derek’s stupid jacket.

“What did you do this time, Stiles?” Derek asks, raising his eyebrows as he saunters closer. “Were you breaking into the records room again? No, wait, let me guess. You decided to borrow your dad’s cruiser?”

“His taser, actually,” Stiles says, feigning nonchalance. “And I had a damn good reason.”

Derek’s smile grows impossibly brighter. “Oh, this I have to hear.”

Because what seemed like a damn good reason maybe actually isn’t?

Which is as far as he gets before Derek starts laughing.

“It tried to bite me!” Stiles exclaims.

“Really?” Derek asks. “You were going to try to taser a raccoon?”

Derek steps closer, and Stiles can smell his aftershave. His smile vanishes. “You know what you need, Stiles?”

“What?” Stiles asks, and swallows.

Derek leans in, and breathes the words against his neck. “A spanking.”

Somehow Derek has got a hand on either side of Stiles’s hips. “You heard me.”

Stiles’s brain short circuits. He should laugh, right? That’s what should be happening here, because this is a joke. This has to be a joke. Hot leather-clad deputies don’t just appear out of nowhere offering up spankings. Which aren’t sexy at all actually, except why is Stiles suddenly shivering at the thought of Derek’s hand landing a stinging slap on his ass?

He tries to backpedal away from that image. “You—you think my dad should spank me? I’m eighteen, dude!”

“I know exactly how old you are, Stiles,” Derek tells him. “And I never said your dad should do it.”

The heat in the narrow space between their bodies is almost unbearable. Stiles knows that Derek can hear his breath hitching. He can feel the flush rising in his face. And he’s hard. Horribly, embarrassingly hard, and if Derek moves forward even a fraction, he’s going to be able to feel it.

What is even going on here?

“So what?” Stiles asks, and fuck knows where he even finds the courage. His tongue flicks out to swipe his bottom lip quickly. “You’re volunteering?”

Before Stiles can ever register what’s happening, Derek has stepped back and is turning him around to face the desk. The cuff pulls and rattles, and Stiles is breathless, dizzy, the way he gets before a panic attack, except this isn’t panic.

Derek puts his hands on Stiles hips, and jostles him forward so that he hits the desk. “Do you want this, Stiles?” He scrapes his stubble against the nape of Stiles’s neck, and Stiles’s vision almost whites out. “Answer me.”

“Y-yeah.” Whatever the hell this is, yes, he wants it.

Derek slides his hands around to Stiles’s fly, and tugs it open. Then he’s pulling Stiles’s khakis down, and hooking his thumbs into Stiles’s Captain America underwear to drag them down too. He leaves the fabric bunched around Stiles’s thighs. His hands are big and warm as they sweep over the globes of Stiles’s ass, and Stiles groans and squirms.

“I think five should do the trick,” Derek says, and Stiles can hear the smile in his voice. “Assume the position, as they say.”

He tenses when Derek lifts his hands from his ass, but he’s still not expecting the blow. It’s loud, a short, sharp crack that shocks him even before it starts to sting, and Stiles jerks and makes a noise caught somewhere between a gasp and a shout of surprise.

Derek’s hand rubs over the stinging flesh, soothing the flash of pain.

Holy fucking Jesus. That hurts. And did Derek even close the door? Stiles tries to twist around and see, but blow number two leaves him whining. He turns his head and presses his mouth into his shoulder. Lets the sound out of him then.

Those words do something to Stiles’s dick. He pushes back into Derek’s touch, but then Derek’s hand is gone again. Stiles pants for breath, shuddering as Derek lands the third blow. It’s pain, but it’s warmth too, and Derek’s hands are back on his throbbing ass, touching him, gentling him, and Stiles’s dick is starting to leak. He’s into this. Holy crap. He’s actually into this, and not just in a theoretical way.

The fourth slap makes his body jerk. He squeezes his eyes shut, hot tears escaping, but it feels so good. So fucking good.

“More,” he rasps into his shirt.

“One more,” Derek says, voice as low as a growl.

Stiles sucks in a breath, shaking.

The fifth blow is the hardest yet, and the loudest, and it leaves Stiles trembling, his hips jerking abortively.

“Look at you,” Derek says, hands rubbing over his stinging ass. “Fuck. Look at you.”

Derek turns him around, hauls him forward. Stiles is straddling Derek’s jean-clad thigh. Derek holds him there, fingers digging into the tender, throbbing flesh of his ass.

There is no actual way that Stiles can refuse that. Just like there’s no actual way he could have known what the fuck today was going to turn into. He curls his free hand behind Derek’s neck as he starts to move. The cuff rattles on his other wrist.

It’s good, and hot, and over embarrassingly fast. Stiles bites down on Derek’s leather jacket to muffle his cries when he comes, and then Derek’s setting him carefully down on his shaking legs again, and tugging up his underwear and jeans.

“You’re going to be good from now on, right, Stiles?” he asks in a low voice.

Stiles swallows, and glances at the door which, yeah, has been open this whole time. He drags his gaze back to Derek, eyes wide, and doesn’t really know how to answer that? Is the question still a part of whatever weird game they’re playing here? Or is it not a game at all? Stiles has no fucking clue.

Derek reaches forward and grips his chin. Tilts his head up so Stiles can’t avoid his gaze. “Stiles?”

“I’ll be good,” Stiles manages in a whisper.

Derek shows him that thousand watt smile again, and leans close. “Oh, I know you will. You’re going to be my good boy.” He brushes his mouth against Stiles’s in a gentle kiss that leaves Stiles more breathless than the spanking. When he leans back, he’s smiling again, his eyes crinkling at the corners. “My shift finished an hour ago. I’ll call you, I guess.”

“What?” Stiles blinks, and waits for the world to start making sense. “Wait. What about the cuffs?”

“I’m sure the sheriff will take them off you when he gets back from his patrol.”

“Good boy,” Derek says with a grin, and leaves him cuffed to the desk.