Dean Winchester will Turn You Every Which Way but Straight

Texas Ranger Dean Winchester has a unique partner. Some might think they're a strange pair, but if you ask Dean? Cas is nothing short of pure badass. Even if he's only about four feet tall and covered in red hair.

Dean Winchester and I are both big Clint Eastwood fans, so I used this prompt to write a good old-fashioned Western AU inspired by one of his lesser-appreciated films.

Illustration from my tumblr 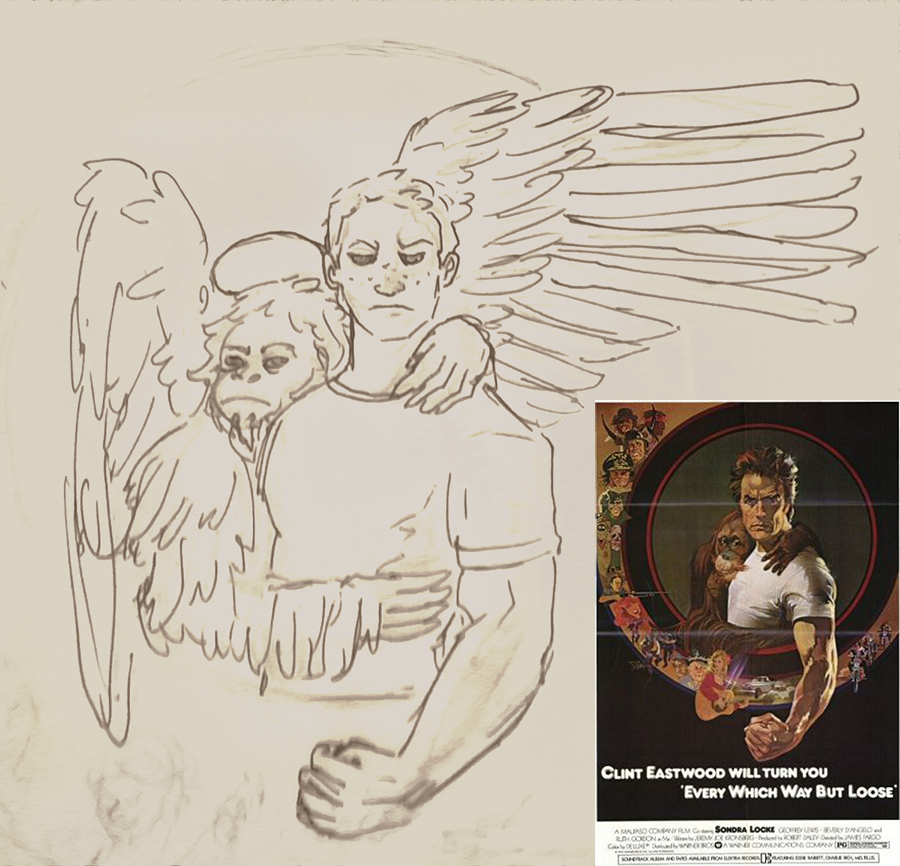 The orangutan stretches out his left wing, knocking one of the Tastee Boiz off the lid of the train car. As the Boi falls under the wheels of the train the current segment of train (the one that Dean and Cas are standing on) shudders. Cas flashes Dean a thumbs-up, long orange fur whipping in the wind, before leaping off the side of the train to swing from pole-rail to tube to smokestack until he reaches Dean's car.

That was the last of them, Cas signs.

"Yep. Abbadon and her Tastee Boiz won't be bothering the South Pacific Railways ever again." Grinning, Dean takes a seat on the bench and gestures for Cas to take a seat. It's been one hell of a day. Reaching behind Cas's back, Dean strokes the sensitive place between the wings. It's an unconscious gesture at this point.

When the sheriff's department first assigned an angelic orangutan as Dean's new partner he'd been horrified. But man, is Castiel good. There's no one else he'd rather have at his side. They just took out a whole gang of train robbers in, what, thirty minutes flat? As the train chugs through the desert canyon the sun starts to set, red light catching Cas's fur. Dean rests his head against Castiel's shoulder. The garden on top of this train car is peaceful, even with the dead corpse at their feet. Dean kicks the body away from them before re-settling against his partner.

"Mmm. Not here." Cas wraps his wings around Dean, and Dean holds on tight for the jump. He doesn't let go until they're safe in their train hotel room. With relief Dean takes off his cowboy hat and vest, kicks off his boots before helping Cas out of his serape. The wings always make things a little complicated. Dean throws in a little wing-massage, lets Cas lie down on the bed and just take a moment to relax before dialing room service. The conductor of the train himself leaves the steering wheel to thank Dean and Cas for saving the train and to take their order. "Anything you fellas need, it's on the house," he says, looking at Cas nervously. "What does he like? Bananas?"

"And a few steaks," Dean adds. "Blood-rare and char-grilled."

"I didn't get that," the conductor says. "Sorry. I studied some ASL in college, but, uh. I don't really know."

Cas rolls his eyes. Grabbing a pen and paper from the desk, he writes down his order. His orangutan fingers are a little clumsy around the pen but his handwriting is legible enough.

"Holy shit!" The conductor blinks at the paper. "How does he - what kind of -"

"Were the wings not enough for you? Cas here is an angel." Crossing his arms, Dean glares at the conductor. People are so quick to judge based on appearances.

Cas just vaults up onto the top bunk, looking smug.

The lobster comes fresh from the fish tank car of the train. Cas had nearly drowned one of the Tastee Boiz in it until Dean reminded him that this was the main food source for the hundreds of thousands of train passengers. Dean manipulates the lobster cracker for Cas - the guy can do just about anything, but he still doesn't have opposable thumbs. Besides, it's kind of fun to dip each segment of succulent lobster in butter and hold it up to Castiel's lips. Cas looks him deep in the eye as he takes it from Dean's fingers, adding just a swirl of tongue. His dark eyes are heated, and Dean can feel his cheeks flush.

If this is wrong, then Dean never wants to be right.

As the champagne disappears, as Dean and Cas lose themselves in the heated waves of interspecies connection, the train choo-choos along into the warm desert night.

you're welcome. you're all welcome.