The Order of Things

One day, an obbo goes horribly pear-shaped and the unspeakable happens: Bodie loses his partner Doyle.

In the aftermath, Bodie leaves it all behind him: London, CI5, his hopes and dreams and missed chances, repairing to a small cottage in the north. He exists, doing the bare minimum, unable to even think of Doyle, much less avenge him. George Cowley, however, has other plans, sending him deep into enemy territory with a promise of vengeance in pursuit of the man who threw Bodie down the rabbit hole.

However, a straightforward tracking job becomes more complicated than Bodie had bargained for when he finds his guide is insane, their other companion may be a spy, and the terrain itself may be in league against him. His dreams bring back memories he'd long suppressed. And the vengeance he so dearly seeks may not be what he thinks it is.

PLEASE NOTE: check the endnotes for warning if there are particular things you absolutely don't want in your Pros. 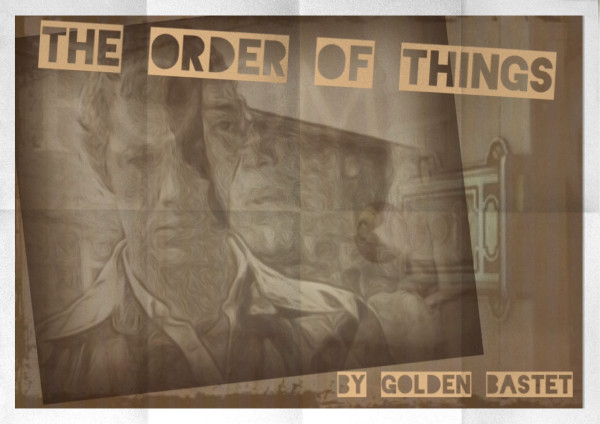 Chasing another in a long line of villains. Bodie had switched back to circle around the rear of the building, while he'd taken the front.

He'd known it'd been a bad idea as the door opened and their quarry paused, not expecting another armed man out front, then dove towards Doyle

"Don't think this is one of your better ideas, Angelfish"

Doyle hadn't been feeling well most of the day, should've been at home in bed. Except their type didn't stay at home in bed, now did they?

The bullet came whizzing towards where Sykes had been, but Sykes was no longer there to meet it

"I meant you, and the cold. Both temperature and germ-wise"

Doyle could see the bullet, if that were possible with its trajectory and its high rate of speed; but what he really saw was Bodie behind it, as the horror of what was about to happen began to unfold across his features

"I'll be fine. Nothing a good hot cuppa and a good night's sleep won't cure."
"Yeah, and when are we next set for one of those?"

Doyle thought he could see a word start to form on Bodie's lips.

It was nothing like what Doyle had expected it to be, though truthfully he remembered little about Mayli's little field trip. No, more like he'd been hit by a sledgehammer with a fine point, both lifting him up, knocking him off his feet and drilling directly into his chest

In a way, it seemed fitting that it would be Bodie's bullet: not some terrorist, or some drug runner, or some IRA goon.

Sykes fell into a rolling drop, then slipped away, suddenly a bit player in this unfolding drama

Only Bodie could have the honour -

"It won't take too long, just have to cut him off and then we've got him."

And the ground was rushing up to meet him -

"Doyle." He was being shaken awake, Bodie at the other end of the arm shaking his shoulder. "Wake up; we're being summoned. Sykes has finally been spotted. C'mon, then. And wipe the drool off your face. Hate to ask what you've been up to in your sleep."

Doyle stood, adjusting his wool jacket, looking around the empty break room for a second, then following his partner's back retreating through the door.