Jordan Parrish is the new sheriff of Beacon Hills, a town haunted by its past.

Most people have probably read this first chapter as part of my Word Soup collection. As always, I have no idea where this story is going, but it's already proving to be not a narrative so much as a non-linear collection of snapshots. Nobody panic. This might work... *shifty eyes*

A note on the Major Character Death tag:
It's okay, it's not Sterek. It's also not the Sheriff, or Parrish.

A note on content: there is no rape in this story so I haven't used that tag, but it is very heavily implied that's what's going to happen, so some readers might be triggered by that. 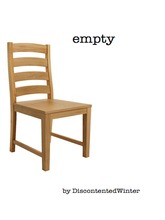 The job doesn’t come with the house, but that’s how it works out. The former sheriff mentions offhand that he’s selling the place, and Parrish, because he’s still living out of a suitcase in a hotel, asks what he’s expecting for it. An hour later, after checking the place out, they shake on the deal.

It’s a big house for a single guy, but the price was good.

Feels a little weird, taking Stilinski’s job and his house, but if Parrish is honest with himself this whole situation feels weird. He’s not even thirty, and he’s Sheriff of Beacon Hills. It only took a Google search to figure it out. The job is a poison chalice. Four years ago someone set a bomb off in the station, killing eight deputies. And that was just the bloody end to years of unsolved cases. Not just little stuff either. Attacks, arsons, murders. Beacon Hills is a pretty town, but it’s seen a lot of unexplained bloodshed.

But Parrish was drawn here.

Mostly for the change in pace, despite the town’s recent history. It’s sure as fuck not Afghanistan. It’s not L.A. either, where Parrish was a cop for five years after getting out of the army.

He put in for position of interim sheriff because he needed a change. And he’s got a year and a half until the election to prove himself to the residents. He still doesn’t understand why none of the Beacon Hills’ deputies wanted the job. Not really. Not until he meets Sheriff Stilinski.

The man’s friendly enough, but Parrish has seen that look before. The blank one. The one that Parrish is more used to seeing in the faces of the guys he remembers from the dusty plains of Helmand Province. Stilinski is a broken man.

It doesn’t take long for Parrish to figure out why. His kid’s name is in one of the many unsolved case files that land on Parrish’s desk his first day in the job. It explains the look in Stilinski’s eyes. It also explains the way he walked around the house before he handed it over to Parrish, his shaking hand lingering on windowsills, on walls, on the doorframe of the one empty room he didn’t step inside.

It takes a while to settle in. There’s a lot to learn about the town, and about running the department. The deputies are good though, and the admin staff saves his ass on more than one occasion when it comes to rosters, and meetings, and budgeting. Parrish goes into election year feeling like this is something he can do.

He works on the house on his days off. Gives it a fresh coat of paint inside and out. Strips the old carpet back to the floorboards and polishes them up. Renovates the bathroom. He makes friends and invites them around for backyard barbecues and football games. It’s good.

The house still feels too big though.

At the end of fall, a storm rolls through Beacon Hills. Parrish finishes work late. He stayed behind to help with traffic control when the lights went out on Main Street. When he gets home, he’s dripping wet. He parks the cruiser in the driveway, and heads inside. He showers and changes, and makes himself a sandwich for dinner. Then he heads upstairs and climbs into bed with a book.

He dozes, he thinks.

Wakes with a start when a branch scrapes against the side of the house in a wild gust of wind.

He checks his phone. It’s past midnight. No messages or calls from the station.

He reads another few pages of his book.

The storm is unsettling. Every noise seems unexpected, and out of place.

The scrape of branches, the rustling of leaves, the dull roar of the rain on the roof. Outside, the darkness is broken by jagged flashes of lightning. Thunder rumbles low and close.

There’s a strange tap-tap-tapping from somewhere. Parrish listens for a moment, but can’t figure out what it is. He reads the same paragraph in his book three times. And then something that sounds like a reedy wail rises through a break in the rain and the thunder.

Parrish climbs out of bed.

He’s halfway down the stairs when there’s another brilliant flare of lightning, and then the power goes out.

He hears the wailing again, coming from the back of the house.

Parrish heads for the kitchen, grabbing the flashlight off the top of the refrigerator.

Lightning illuminates the world for a brief moment, and that’s when Parrish sees the figure standing outside the kitchen window. He crosses to the kitchen door, holding the torch like a baton, and unlocks the door and pulls it open.

The kid tries to run when he realizes, but Parrish grabs him by the arm. That’s when he sees the kid’s holding a toddler on his hip.

He’s like a feral animal. Parrish is afraid if he lets him go, he’ll never see the boy again.

The toddler wails loudly when lightning cracks the sky again.

In that brief flash of light, Parrish sees the ghost of the former sheriff’s son in the too-thin face, in the dark eyes, in the mole-speckled skin.

“Stiles,” he says, and the kid flinches at the name. “It’s Stiles, right?”

Parrish uses the kid’s confusion to corral him into the kitchen. To close the door behind him.

“My name is Jordan Parrish,” Parrish tells him. “I’m the sheriff.”

The kid hugs the wailing toddler tight. “Where’s my dad?”

“He retired,” Parrish says, and flinches when a sob escapes the kid’s throat. “He never stopped looking, Stiles, okay? I can call him. I’ll call him, okay?”

Stiles nods, and hides his face in the toddler’s dark curls as lightning illuminates the kitchen once again.

“You’re freezing,” Parrish says. “You must be. Come upstairs and I’ll get you some dry clothes.”

The reports had said the Stilinski kid was an omega. That he’d probably been targeted because of it.

“You should put your son in something dry at least,” Parrish says.

At that moment, the lights flicker back on.

Stiles is a mess. He’s too thin, and there are bruises on his face and arms that Parrish didn’t see before. Dark circles under his eyes. And something that looks like claw marks on his throat. What the hell?

Parrish leads him up the stairs.

He fetches a towel from the bathroom, and then goes into his bedroom to grab a warm hoodie for the toddler to snuggle in. He grabs his phone at the same time, and hopes Stilinski is still in his contacts.

When he comes back outside, the hallway is empty. He finds Stiles and the toddler in the spare room. It’s full of boxes and renovation supplies and tools. It’s the room Stilinski couldn’t walk into the day he left. Parrish doesn’t need to see the heartbreak on Stiles’s face to confirm this was once his bedroom.

“Hey,” he says, and hands over the towel.

The toddler wails when Stiles puts him down. Then, when Stiles gets on his knees to dry him, the toddler keeps trying to climb back into his arms.

Parrish leans in the doorway as Stiles undresses the toddler and then tugs the hoodie over his head.

“You warm now, baby?” Stiles asks, and the toddler dives back into his arms. Stiles holds the bunched-up towel between them, keeping the hoodie dry. There’s something in his expression as he gazes around the room. Something haunted, and hunted. Something almost cold. And then he closes his eyes, and for a moment he looks achingly vulnerable, as young as the teenager he was when he vanished five years ago. When he opens his eyes again, they’re shining. “Will you call my dad?”

Stiles stands up, carrying the toddler on his hip again. He steps toward Parrish, and suddenly Parrish is holding an armful of wriggling toddler.

“His name is Ryan,” Stiles says. The hand he rubs over the toddler’s damp curls is thin and pale. “Tell my dad his name is Ryan Hale.”

Then Stiles kisses the top of the toddler’s head and shoves past Parrish.

Parrish fumbles with his phone and almost drops it. “What? Wait!”

Parrish hurries down the stairs behind Stiles. “Stiles, wait!”

For a second he thinks Stiles is going to listen. The way his shoulders tense, the way he almost stumbles to a stop before his footsteps are carrying him back toward the kitchen. Then he’s twisting the doorknob and wrenching the back door open.

“Stiles!” Parrish yells. “Stiles, where are you going?”

Where are you going?

Where have you been?

What happened to you?

Stiles turns, silhouetted by a flash of lighting behind him that lights up the sky. “I’m going back for his father,” he says.

Ryan screams, reaching out his hands for Stiles.

But Stiles is already gone, a shadow in the night, swallowed by the storm, leaving nothing behind but an open door, wet footprints, and his screaming son.