The story is about Jim and Sue Dawson, teenage sweethearts who have been married for twenty years. Their two children give them an anniversary party, and a gift of a two week holiday in a Spanish villa.
On arrival they find the pool is shared with the villa next door, Sue and Jim's lives and problems become entangled with those of the young and carefree Esther and her Latino fiancé Felipe.
It is a tale of what happened next.
Eleven days of the holiday remain, eleven chapters (I hope) one for each day.
My narrative begins directly as the credits roll. The last shot we see of them apart from the leap into the pool, is Jim applying cream to Sue's shoulder, on the terrace. It is here the narrative begins.

After Sun is a wonderful drama. It is only one hour, but it is a joy. Anyone who has been married for a while will identify with the story, and if you haven't been married it is a cautionary tale. It is a graphic illustration of how deep love changes as the years pass, how people can grow apart whilst remaining desperately in love, and how talking to each other is so vitally important.

If you've never seen the drama I urge you to watch it. It's available on YouTube.

Lying in my bed I hear the clock tick,
And think of you
Caught up in circles
Confusion is nothing new
Flashback, warm nights
Almost left behind
Suitcases of memories,
Time after

Sometimes you picture me
I'm walking too far ahead
You're calling to me, I can't hear
What you've said
Then you say, go slow
I fall behind
The second hand unwinds

You said go slow
I fall behind
The second hand unwinds

If you're lost you can look and you will find me
Time after time
If you fall I will catch you, I'll be waiting 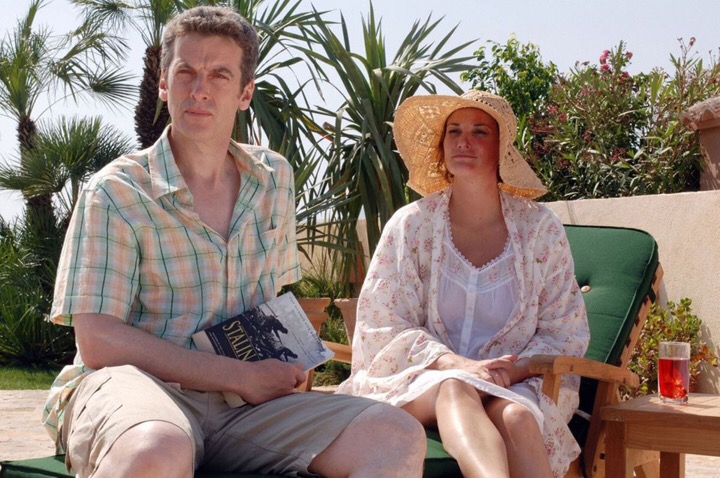 Jim wandered out onto the terrace, avoiding the coloured paper lanterns which hung suspended on streamers. Esther had put them there as part of her 'Anniversary Celebration' party.

"Okay, so I'll get on to the airport, see about flights back yeah?"

Sue did not turn, but continued applying her Flamazine cream as delicately as she could.

"What are you and I going to do here for eleven whole days?"

From somewhere inside the villa came the insistent and annoying tune of a mobile phone.
They both turned as one.
"Maybe you should.......?" She gestured towards the doorway.

"No! Just leave it." Jim listened as the irritating noise continued to trill until the voicemail kicked in.
He shifted himself uncomfortably.

Twenty years they had been married and he felt almost as if he'd met her just this minute, for the first time. Gauche, uncomfortable, tongue tied.

She continued to apply her cream, turning her back slightly and reaching over her own shoulder.

"Can I help you with that?"

The offer was tentative, because the last time he'd offered she verbally pushed him away. Shut him out, and he felt more inadequate than she could ever possibly imagine.

"That would be lovely, thank you."
He took the pot from her hand, as she turned to present her burnt back to him.

"I haven't completely cocked things up have I?" His voice was so quiet, gruff with emotion.

His fingers began to carefully smooth the ointment across her reddened shoulder blade.

The tiny kiss he placed there made her suck in a breath.

"Never mind. Doesn't matter." The touch of his hand was almost reverential.

The afternoon turned hot.
Sue settled herself on a sun bed, under a large umbrella.

Her sketch pad and art materials were beside her, but she couldn't interest herself in anything. Instead she sat gazing across the pool to the dry dusty valley, her mind far away. The heat of the sun making a shimmering liquid haze before her eyes.
She watched a lone bird of prey circling menacingly, before wheeling away and disappearing from view.

Presently Jim came out of the villa with a tray of tea things. He set them down beside her, and sat himself awkwardly on the adjacent lounger.

She noticed his feet were devoid of his special socks, and he was sporting Velcro fastening sandals.

"I made tea." He indicated the tray.

Her husband shut his trap immediately.
Gave a sigh, and shuffled back indoors, reemerging moments later with a book.

Sue frowned, but made no comment, as he settled himself on the sun bed beside her and began to read with the greatest concentration, in silence.
After several seconds of watching him out of the corner of her eye, she noticed him glancing furtively her way.......before slowly turning the book the right way up.

Two hours later Sue woke from a doze to find her husband standing over her.

"If? I thought it was decided?" She didn't look up from her sketch, which lay abandoned on her lap.

"You coming? Or not?" Jim turned and walked back towards the house.

"No. You go. I'll stay here." The reply was clipped. Just as it was at home when he suggested they do something together.

With another sigh, he stopped short, retraced his steps and came back to wait beside her.

"Sue! I'm really trying here, okay? But it's not going to work unless you are prepared to try too.
Please! I'm asking you. Come into town with me, and we'll buy some groceries."

"FINE!" She huffed and threw her pencil to one side, swinging her legs round and rising from the sun lounger.

Gazing out at the lovely landscape as the car wound its way towards the nearest small town, where there was a market and some shops, Sue fell to musing aloud.
"Best if I do the asking.....when we buy things. We don't want you doing your 'foreign voice' again."
She remarked idly.

"I apples buy from you!" She continued with mockery in her voice.

"Sue. When I wanted to buy the special socks.....why did you send me off with Esther? When you speak perfectly adequate Spanish.....better than she did anyway? Why did you do that to me? You know I'd have preferred to go with you!"

"Really? Would you? I don't know. I wanted to see how you'd react I suppose. Young nubile female, hanging on your every word!" She turned to look at him, and his face was pained, brow wrinkled.

"I suppose her silly little pixie face and her 'peace, love and harmony' instantly got up my nose and her reaction to you too. She pissed me off."

"Her reaction to me?" Jim laughed out loud. "She thought I was the most boring idiot she'd ever seen. Just as you do apparently. So you thought you'd somehow punish me, is that it? And her too! For being young and attractive! A nice little outing with the MDF King! She was patronising in the extreme. More's the pity I didn't see through it more quickly."

"I suppose the reason she pissed me off, was because compared to her I'm a raddled old bag! I could see the way you looked at her, and it made me see myself, as I was years ago. When you looked at me like that!"

Jim pulled the car into the market square and they made their way to the little supermarket.

"No? What do you see exactly then Jim? Eh? Do you even actually look at me? Ever? I don't think you do!"

The conversation continued as she trawled the aisles, stuffing random items into a basket, without paying them much attention, Jim trailing along in her wake like a scolded dog.

"Of course I look at you! You're my wife. For your information I see the same person I married, twenty years ago. You haven't changed much at all. You're fine looking, you always were. I think you're sadder, but for that I mainly blame those bloody pills."

She rounded on him then, as they reached the check out, ignoring the stares of other shoppers around them.

"You know why I take them! I take them because I need them. My children have left home and I have a husband who barely speaks to me or notices my existence!"

Together they left the shop and burst forth onto the street.

"Oh, that's it!" He spat. "Of course! It's MY bloody fault! Along with everything else. Well, I'll tell you something Sue......shall I? Since we seem incapable of conversing without having a row.....even if it's in the middle of the bloody town......"

Throwing the groceries into the back of the car, they both climbed in and he slammed into reverse.

He roared off up the narrow road, heading back towards the villa, a cloud of dust billowing behind him.

"Because you shut me out! Every damn time. I try to talk to you, to pay you a compliment or ask how you are and all I get is sarcasm and ridicule and mockery! That's it! Every bloody time.
SLAM!"
He smacked his hand against the steering wheel and made her jump.
"Right between the eyes.....everything I say, or try to say. So in the end I just stop saying anything. That way I avoid a row! Because I'm too bloody tired Sue, when I get home from work. I'm knackered. I just want to come home and relax. And I find that you've been sitting in a darkened room all day, feeling sorry for yourself, doped up on bloody pills. I see that, and it breaks my heart. Because it's MY BLOODY FAULT!"

They'd reached home, Jim pulled up, shut off the engine, and stormed off towards the house without another word.

Sue remained where she was, in the passenger seat, as she watched him disappear. His shoulders bent under the weight of his misery.

Her head in her hands she wept.