Moving between the present and the past, this is the untold story of how a single fire in 17th-century Scotland laid the path to one cursed man's salvation, more than 300 years later.

Chapters alternate between present-day Rowena (first person POV, beginning with her imprisonment by Sam) and a 3rd-person retelling of what made her into the woman she is today.

Canon-compliant until S11E10 (The Devil in the Details).

So much love and thanks to give that I could never find enough words. To my betas sweetasscas and 200dollargod, thank you for spending hours editing, answering my endless questions and concerns, giving encouragement, and putting up with me in general. Big hugs also to Saiorse for providing me with fun music mixes and enthusiasm that kept me charged in these final hours.

And last but not least, glomps and gratitude to my partner in crime for this fic, kalliel! She not only supplied the gorgeous artwork that gave this story life, but showed amazing patience and kindness as I tackled my first fic challenge. Whoo, we did it! 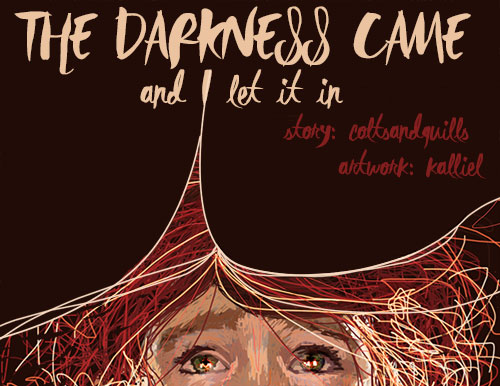 My story will have a happy ending.

Now, given the fact that I’m all trussed up in chains by the majestic Samuel Winchester, no doubt your mind is going to some very naughty places. But, while I’m admittedly the kind of lady that doesn’t mind an occasional indulgence with less conventional kinks, that’s not the kind of happy ending I’m talking about.

No, I’m talking the fairy tale sort. The kind that resolves with a forever and permanent happily-ever-after.

What’s with that skepticism? Don’t believe me? Well, you can’t entirely be blamed, I suppose. Likely, you’ve been raised on stories where only innocent princesses and doey-eyed maidens are rewarded in the end.

But that’s a lie.

That’s right, my darlings. Don’t ever let anyone tell you that you need to be beautiful and wholesome and from a princely family and the recipient of a noble prince’s kiss to earn yourself eternal bliss. The secret the world doesn't want to let us all in on is this:

All you need is you.

So kick Hans Christian to the gutter, and don’t put your faith in the Brothers Grimm. In fact, stay clear of brothers in general.

They tend to be a mighty pain in the ass.