[Podfic] Even the Light is an Illusion

Podfic of Mizzy's "Even the Light is an Illusion"

Death threats are an unfortunate side-effect of being Tony Stark, so he's learned to ignore them. The problem is, when someone really wants you dead, hiding your head in the sand just kinda exposes your ass.

But it's not just Tony's behind on the line. Whoever wants him dead wants him to suffer first, and they're willing to do anything to make that happen. Tony knows there's only one way out. To save Steve, the Avengers, and the general public, Tony has to die. Of course, death isn't always the end, and Tony does what any other self-disrespecting scientist would do: he finds a way to fake his death and avenge his own murder.

The trouble is, terrible decisions usually have a terrible price, and this one is no different. Tony has a chance to save the day, but the cost may be more than Tony was ever expecting to pay… 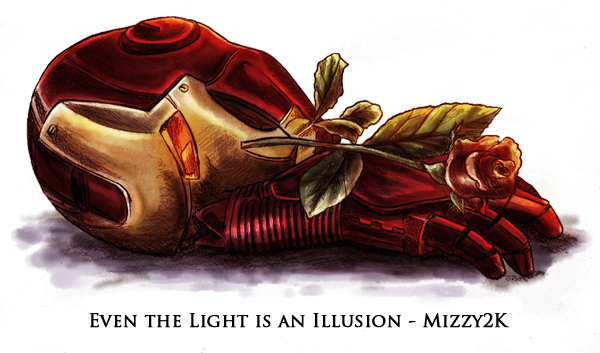 Reader's note:  I love, love, LOVE this story.    I'm ashamed to say I'm talking a bit fast in this pod- my sincere apologies for that.   That being said, I got to play around with some really neat effects in the making of this one.

Also, while the tags mention the comics, you DO NOT need to be familiar with the comics to enjoy this story.  I'm only passingly acquainted with them, and I still loved it enough to spend a couple of months making this.  Trust me.  This fic is wonderful.

If you listen, I very much hope you enjoy!