Typical Day at the Office

Neal gets thrown through a plate-glass window. Just a smidge of basic h/c for fandom stocking. 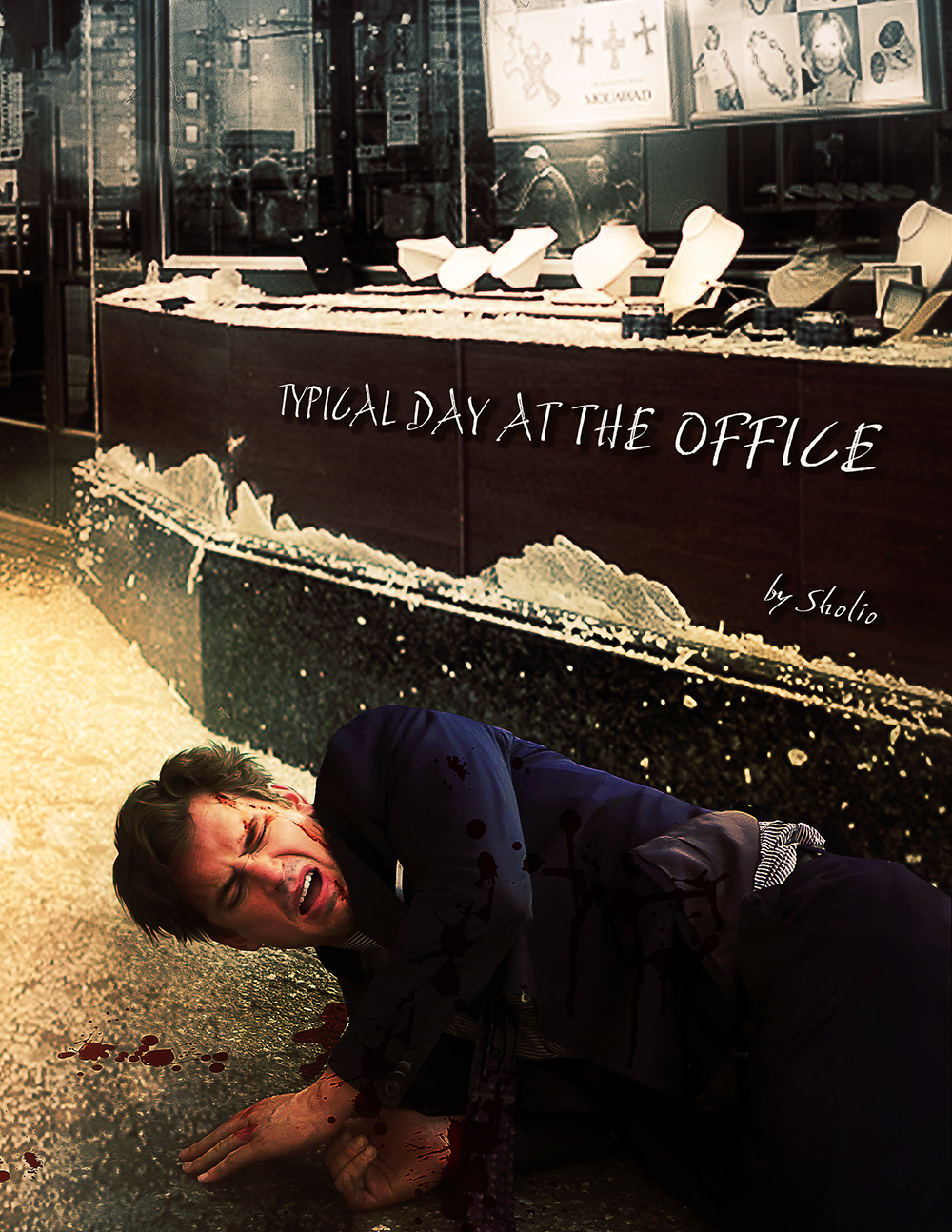 As usual when he was in the van and Neal was in the field, Peter was tensed and ready to go in at the first sign of trouble. It should have been a simple job: Neal was pretending to sell some gems to a jewel fence and her gang. There was no reason to expect things to go bad. Still, Peter was always braced for trouble when Neal was out of his sight, and when the calm conversation over Neal's transmitter erupted into yelling and chaos, he was out of his chair and springing into action with the rest of his team.

They were in a small parking dock behind the building that housed the jewelry store the gang used as a front. Peter pointed wordlessly, splitting the team and taking his group around the side. Over the receiver in his ear, he could hear Neal trying to calm the situation, which had something to do with a member of the gang having recognized him from an earlier FBI op. Then there was a loud crash and Neal yelled in pain.

Peter ran around the corner of the building, dreading what was going to meet his eyes. What he found was that the plate-glass front window of the jewelry store had been broken out from the inside, and Neal was sprawled in the wreckage, struggling to get up. Broken glass surrounded him, splattered with blood.

"Neal! Don't move!" Peter snapped, and Neal stilled instantly. Peter picked his way through the glass to him. Inside the store, his people were swarming over the stunned jewel fences. This wasn't precisely how he'd wanted the takedown to go, but he was pretty sure they had enough to get them on. Right now his concern was mostly for Neal, who was looking at him with a slightly stunned expression, holding his arms in front of his body as if he wasn't quite sure what to do with them. His bloody hands were curled like claws.

"They threw me through a window," Neal said in a dazed voice as Peter crouched in front of him.

"You do have a way of making friends with people," Peter said. "Jones, we got an ambulance on the way?"

"Already on it, boss," Jones said from inside the store.

Neal's face, to Peter's infinite relief, was almost untouched, with just a few cuts along his hairline. As far as Peter could tell, he must have gone through headfirst and instinctively thrown up his arms to protect his face. Which meant his arms had taken the worst of it. Blood was dripping off the cut-to-ribbons sleeves of his expensive suit jacket. However, it wasn't spurting and Peter decided to assume that meant Neal's life, at least, was in no immediate danger. The far worse possibility, of serious damage to the delicate muscles or ligaments of his hands, was something Peter wasn't prepared to consider yet.

"Peter, my hands," Neal said. He was starting to shiver, his teeth chattering.

Peter shrugged out of his jacket and draped it over Neal's shoulders. "Let me see them," he said, and Neal obediently held them out. He was much too quiet, much too obedient, still with that shocked deer-in-headlights look. Peter grasped his hands as gently as possible and spread them out carefully. Bits of glass were embedded in the backs and sides of his hands, but the palms were untouched; he must have curled them up when he'd gone through the window.

"Your hands are going to be fine." Whether or not it was actually true, Neal needed to believe it right now. And while the cuts on his hands were oozing a lot of blood, none of them looked terribly extensive or deep. Of a great deal more concern was the large shard of glass embedded in his left forearm, at least five or six inches long; it had sliced through his sleeve and sunk deep into the flesh. Since Neal didn't seem to have noticed it, Peter didn't point it out. He lowered Neal's hands carefully into his lap, trying not to bump anything.

Neal fretfully tried to grasp one of the glass slivers embedded in the back of his hand. Peter firmly separated his hands. "No. Let the paramedics do it."

Neal subsided. He was still shivering, but his eyes looked a little less glazed and more aware of his surroundings. "Don't you need to get back in there?"

Peter flicked a glance over his shoulder, at the thieves being cuffed, with Diana being perhaps a bit rougher than necessary. A brief professional assessment let him know that his team had it in hand. "I'm where I need to be," he told Neal.

"I don't need babysitting." With a grimace, Neal gathered his legs under him and tried to lurch to his feet. Peter pushed him back down. "Come on, Peter, I'm not hurt that bad."

"You let the paramedics decide that, all right? Just try not to move too much. Anything hurt besides your hands?" He'd seen how the shock of a sudden violent incident could cause people not to notice a broken limb or a gunshot wound, and he had nightmarish visions of Neal bleeding out from a spear of glass embedded in his kidney. Whatever else Neal was, he wasn't a violent person, or someone who dealt well with having violence aimed in his direction.

"It's mostly the hands. Arms, I guess." Neal started to raise his arm and noticed, for the first time, the long glass shard sticking out of it. He paled.

"Don't touch it," Peter admonished him, as Neal started to reach for it. "Just stay sitting there and wait for the paramedics. You should probably be lying down, but there's glass everywhere."

"That's why I should move somewhere else," Neal said faintly, but he didn't object when Peter moved next to him and gave him something to lean against.

The sound of an approaching siren was more than welcome. Peter let Neal continue using him as a human prop until the paramedics picked their way through the glass and took him in hand, at which point Peter went to see how his team was coming along with the crime scene.

As he'd told Neal, they had it well in hand and there was really nothing for him to do; Diana, in fact, gave him a pointed shove in Neal's direction. So he wandered over to the ambulance, where Neal was sitting with a blanket around his shoulders and his sleeves rolled up, meekly submitting to having glass shards picked out of his hands.

"How's he doing?" Peter asked, leaning against the ambulance's open back door. Bits of glass glinted in Neal's hair, and Peter reached over to pluck some of them out, ignoring the look Neal gave him when he did it.

"Nothing's too deep," the paramedic said. "He'll need stitches in this long one, and should probably go to the ER for that and a tetanus booster. No need to take him in the ambulance, though, if there's someone to drive him."

Neal, with his arms and hands swathed in layers of bandages, was handed off to Peter by the paramedics. "You don't have to," Neal protested as Peter shepherded him to the car. He was still a little wobbly.

"Nothing else to do here. You're only saving me from paperwork."

"Uh huh." Having little choice, Neal allowed Peter to buckle the seat belt over him, holding his wrapped arms out of the way.

Peter tossed his suit jacket (slightly bloodstained now) into the backseat and pulled away from the curb. "You in too much pain?"

"Not really." Neal settled back in the seat, eyes half closed, and flexed his hands under the bandages.

"I'm sorry about this, Neal," Peter said. He clenched his hands on the steering wheel. "Intel failure. We shouldn't have sent you in, if there was someone in the gang who could make you."

"Not your fault." Neal closed his eyes and let his hands come to rest in his lap. "You couldn't have known."

By the time they reached the hospital, Neal seemed to be half asleep -- adrenaline crash, Peter suspected, as he roused him and got him back on his feet to herd him into the ER waiting room. They had about an hour's wait, by which time Neal had perked up enough to start chafing at the boredom and threatening to make Peter help him in the bathroom if it took too much longer. "Actually you might have to anyway, if they don't take these bandages off."

"They are going to take the bandages off. They're temporary." He hoped. "And if not, that definitely goes above and beyond the CI-agent relationship. Mozzie can do it."

"You're the one who gets to tell him he has to," Neal said, with a sparkle in his eyes that let Peter know he was definitely feeling better.

At which point it was just as well that the attending nurse called Neal's name.

From there, Neal was processed efficiently. Peter hung out while the bandages were stripped off, stitches inserted, shots administered, and smaller bandages applied to the worst areas. Neal had the use of his hands back -- full use, from the look of things, though the fingers were somewhat the worse for wear. It looked like he'd ... well, tried to punch his way through a wall.

A text from El came in as they were leaving. "She wants to know if I'll be home for dinner or if she should put something aside," Peter said, while Neal not-so-unobtrusively tried to read the text over his shoulder. "Damn, is it that late already?"

"Time flies when you're getting thrown through plate glass," Neal said flippantly.

He was a mess, his shirt cut to ribbons and his hair still glittering with overlooked bits of glass. The fact that he hadn't complained about it let Peter know that he still wasn't feeling a hundred percent.

"You want to come back to our place for dinner?" Peter asked. "Beats hanging around the apartment by yourself."

"I mostly want to take a shower. I have glass dust everywhere, Peter."

"I can drop you off at your place," Peter offered. "Or swing by, pick up a change of clothes, and you can use our shower before dinner."

Neal glanced up with a mischievous look. "Why, Peter, it's like you don't want to let me out of your sight."

"It's not that at all," Peter snapped.

"That's it," Peter said, typing. "I'm telling El you're coming back for dinner. That's an order. All choice in the matter has just gone out the window." Then he ran back the words in his head, and winced.

Neal smiled at him sideways. "All right, but first I get to go back to my place and take a shower so Elizabeth doesn't see me looking like a refugee from a disaster movie."

"Deal," Peter said, and reached over to brush some of the glass out of his hair.