A Truly Nerdy Guide to Criminal Minds Statistics (or: Aaron Hotchner is Probably a Serial Killer)

As you may or may not be aware (and if you’re not aware, I’m a little impressed), I am a huge freaking nerd. In that vein, I have been compiling statistics as I rewatched all of Criminal Minds: statistics on what became of each unsub in each episode. I've recently finished the data collection process, and now here comes the fun part: CHARTS! So many charts.

Let’s start with a pretty basic one. What are the overall odds, throughout the ten seasons, that any given unsub will survive any given episode? 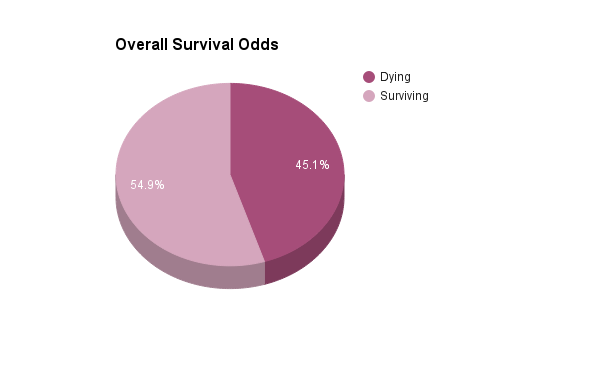 As it turns out, slightly better than a coin flip! 45.1% chance of death vs. a 54.9% chance of surviving long enough to be arrested (Almost always–-there are two exceptions there. We’ll get into those shortly.)

So does it vary much, season to season? Actually, a fair bit. The season with the best odds of survival is: 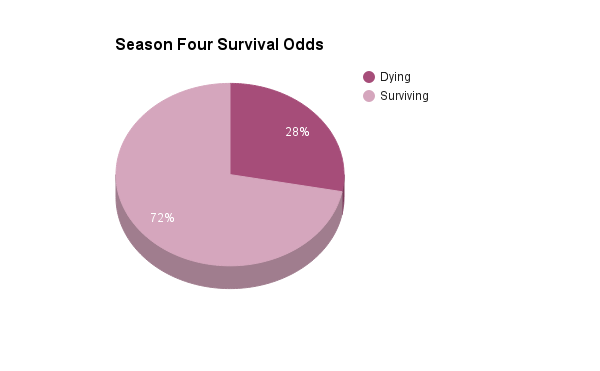 Season four! With an impressive 72% chance of surviving, almost three out of four. Which season gives you the worst odds? 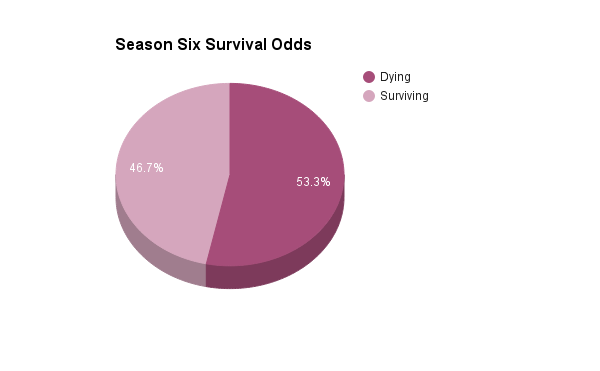 That would be season six! Only a 46.7% chance of survival there, making the range from the best odds to the worst odds a fairly substantial 25.3%. Want to see the figures for the rest of the seasons?

Most of the seasons keep the odds pretty even, but we do have our outliers. (I included S4 and S6 in the links so you could look at the pretty interactive google charts I made if you so desire, lol.) I do want to say that S9 is notable not only for being exactly 50/50 in terms of odds, but also in that the death portion was almost entirely thanks to BAU team members. 17 unsubs died on screen in S9; 15 were shot by a BAU team member. (ETA: I thought I'd make yet another chart to show how weird S9 is. Here it is, comparing the total deaths with the number of those deaths caused by the BAU, broken down by season.)

All right. Now let’s get into some specifics. What, exactly, is the breakdown? What happens to each unsub? 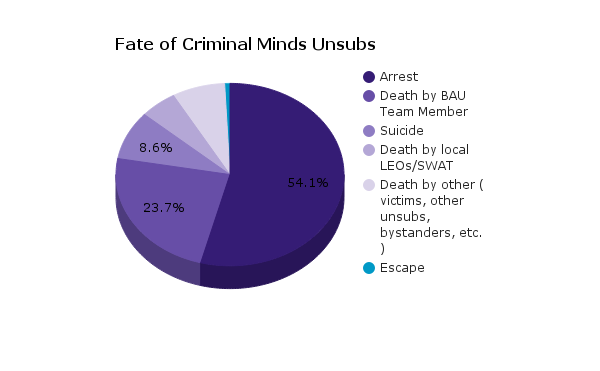 That would be that tiiiiiny sliver to the left of the giant slice. .8% of them escape. What this boils down to in actual numbers: 2/266, as you can see if you click the link for the live chart. Please note that I did not count unsubs in this category who we have seen other resolutions for, like Foyet or Frank. Yes, they escaped–but ultimately, Foyet was killed, and Frank killed himself. Escape is only truly escape if you remain escaped, in my book.

The next interesting statistic there is that almost a full quarter of the all the unsubs are shot by a BAU team member. What this means is that if you’re an unsub on Criminal Minds, you’ve got about a 1 in 4 chance of being killed by one of the team. More specifically, a 23.7% chance. Significant!

Next up is suicide, at 8.6%–-and please note I did not include “suicide by cop” in this count, only if the unsub themselves physically controlled the ending of their life. Those are the one next, death by either SWAT or local law enforcement, at 5.3%. The final option is ‘other,’ which generally means killed by another unsub, in cases with multiple unsubs, killed by a potential victim, killed by a bystander or witness, etc. That one comes in at 7.5%.

So here’s where we’re going to take a look at the real reason I did all this truly nerdy research. We’re going back to that 23.7%, the percentage of unsubs shot by a BAU team member. What’s the breakdown of that, I wonder? Could, perchance, one team member be responsible for an absurdly high percentage of them? Could his name, mayhaps, rhyme with ‘Blotch’? 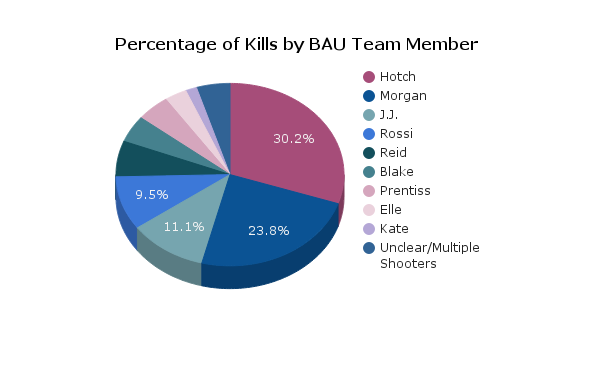 What do you know. Hotch, you DO realize you are responsible for nearly a THIRD of all the BAU-caused deaths, I hope? And that this is absurd? Morgan’s doing pretty well himself, at almost a full quarter of them. To put this in even clearer perspective: 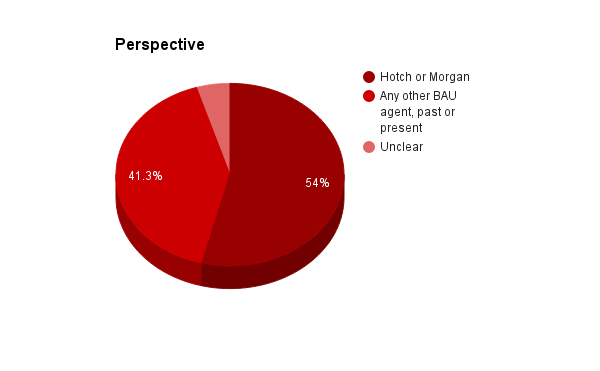 Yes, that’s right. If you’re an unsub being shot/killed by a BAU team member, you have a better chance of it being Hotch or Morgan than you do of it being LITERALLY ANY OTHER TEAM MEMBER, PAST OR PRESENT. Impressive, guys! Also, um, maybe, like… look into that, FBI. You must have some kind of internal affairs unit, I hope. I think maybe this is relevant to your interests. (”Unclear” in this case means that there were multiple people shooting at once and thus it was not possible for me to figure out who actually did the killing.) 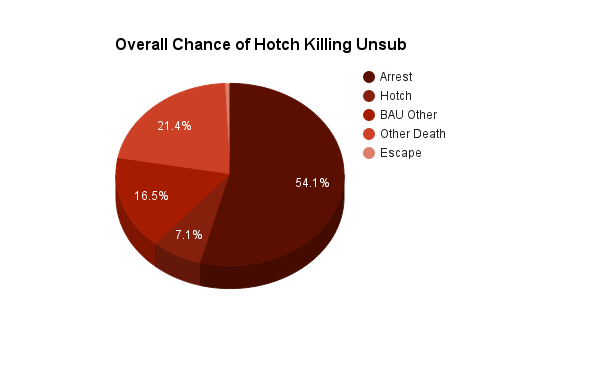 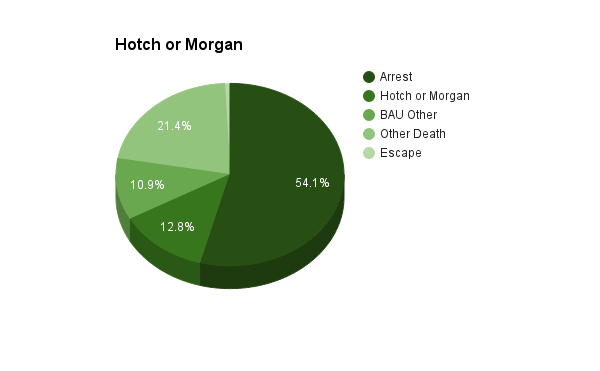 Any given unsub has a 7.1% of being shot by Hotch, and a 12.8% chance of being shot by Hotch or Morgan. That’s a 1 in 14 chance and a 1 in 8 chance respectively. Given all the myriad things that CAN happen, one or two characters having such high odds… seriously, are there ANY repercussions for shooting someone in the CM ‘verse? Because I think maybe there are not.

Of course, this is only deaths. For a further breakdown, including ATTEMPTS (as in, the discharge of a weapon where the unsub survived to be arrested), we need yet another chart! Yay! 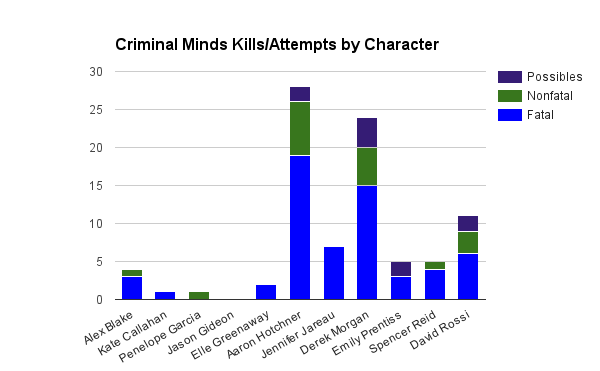 Now if you’ve going through all of these thinking, Well, of COURSE Hotch and Morgan have the highest counts, they’re in every episode! That’s not comparable! first of all, good point! Second, I thought of that too. So I divided the number of incidents (kills, attempts, and possibles combined) by the number of episodes each character appears in. That produced my last chart: the incident rate: 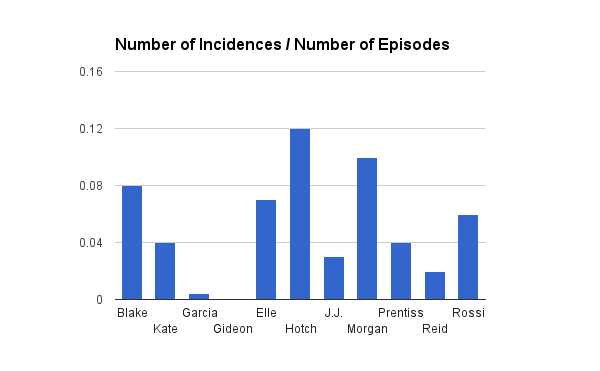 Now, look, I’m reasonable. I’m not SAYING Hotch is secretly a serial killer, but I AM saying I do have a lot of very interesting graphical data. Draw your own conclusions. =P