A Symphony of Chemical Reactions

This was written for Unovis during the June 2012 Holmestice gift exchange.

Six in the morning in the sitting room, rosin on bow. Funny bit of hollow in the stomach, lick of cold. Previously associated with such catalogued items as anticipation, anxiety, apprehension, fear, trepidation. Distracting. Must determine cause. No case on, lump of John safe beneath nest of bedding. Check on him. Door creaks; go still to preserve resting silence. John breathes — see the duvet expand and contract. Constriction around heart eases.

Something else then, carving spaces into the soft red inside bits. Cardia, fundus, body, antrum, pylorus. A rumble. Ah — ghrelin. Unmistakable. Transport must be maintained with fuel. Tedious. Insipid.

Muscle and tendon and joints in concert toward the kitchen. Leftovers from last night’s Thai, or a surprise from Mrs. Hudson — too foolish a hope? Yes.

And then: Margarine next to the taste buds. Mouth, brows, twist as if turned by gears in a clock. Inspect offending slab. Whole chunks missing — someone has been using this plasticine farce. The only possible culprit: John.

Eyes snap open; ghrelin makes a nuisance of itself again, but is paid no heed. Can run on fumes. Shuck dressing gown, pants, threadbare t-shirt on the way to John. Slide in stealthy beside him — he is warm and sleep-fragrant. He snuffles, rubs dear nose into neck, murmurs nonsense into skin. Hush him, answer with lips in hair, rub hands over compact body. Linger.

Flesh fills palms just above hips, just below navel. Pleasing to touch, tender bits fit into broad flat of hand. Fine, soft body hair the same pale shade as the shafts of sunlight just now encroaching on the peace of the room. Venture a gentle squeeze.

“Could be not sleeping. Could be touching.”

Shift, nudge penis into soft hipskin. Puff of air from John’s lungs into collarbone; electricity down spine, scalp gone prickly. Warmth flares between shoulder blades, trickles from jugular notch to costal cartilage. Mouth suddenly greedy in a way stomach is not. Hands. Say his name, pull him on top, press concavity into convexity in urgent tumult.

“You’re going to kill me one of these days,” John says in breathless laughter. Hollows again, different variety: dread. Flip, press face into chest, moan a denial. No, never kill. Never be the cause of suffering. Never be without again. “Hey.” Fingers stroke through hair. “I was just joking.”

Drag bony prominence of own face down the modest length of John’s body. Settle on stomach, arms loose around hips. Swell of flesh on the bowl of his belly fits with mathematic precision between open lips, against inert tongue.

He snorts. Says, “Yes, Sherlock. Yes, of course.” Hand cups vulnerable occipital lobe, pets curls. Heartbeat through skin — John’s or own unclear, not worth investigating. Difference between the two scheduled for deletion.

Tesco Express inadequate, regular Tesco somehow even more so. Former too small to turn around in without knocking merchandise over and being asked to leave, latter full of old people pushing trolleys very slowly down the middle of the aisle. Mobile indicates fine foods to be best found at Borough Market or Harrods. Hate Harrods; smells like grandmummy, an inveterate cheek-pincher and tongue-clicker and general disapprover.

Research recipes instead. How many courses might be forced into a Johnbelly? Is proper cutlery available? Utensils? Mrs. Hudson will have full complement. Is a call to Cook in order? Have not spoken to Cook since 1997. Threatened with frying pan on last occasion. Cowed.

John’s tastes as soldierly as his shoulders: will eat anything, appreciates a full stomach regardless of contents. Preferences unobtrusive, more likely to say “oh, I’m not picky,” than anything else. Choices at Thai, Chinese, and Korean restaurants tend toward chicken or pork; Indian and Bengali, goat, lamb; Mediterranean, lamb, chicken; Italian, pasta, unpredictable meat choice, sometimes even just veg; French, occasions too rare to build reliable database. Out of depth at posh places regardless of type of cuisine, though manners are impeccable. Line of shoulders register tension — uncomfortable awareness of the modesty of his clothing, of the eyes of others.

Flick of thumb sends screen scrolling — eyes catch on “honey.” No harm in including treat for self? John would not begrudge it.

Chemistry and time management — shopping and cooking will prove an all day job. Will need John out of 221b for duration to preserve surprise. Have fifty hours until Borough Market opens — fabricate convincing task.

John in his particular chair, terrycloth dressing gown, damp from shower and fragrant. Reading the paper. Inner thigh peeking out from shadow; distracting.

Stomp foot, snatch paper away. Gaping John not as unattractive as Gaping Everyone Else. Still.

“Oi! What the hell are you on about, Sherlock?” Gape twists into scowl.

“And I’m reading. In my own home. Where I live, whether it’s convenient for you or not.” Shakes paper out, resumes reading. Rather, resumes appearance of reading. Still fuming.

“Must be off, must clear out, must leave me to my work. Bye bye now.”

John stumbles, whirls around, pushes away. Mouth pursed in manner meant to signal vexation but instead serves as invitation to suck. Resist. Went badly last time John was in a strop.

“Jesus, what are you so bloody busy with, then?”

“Not looking after out of work doctors with bum shoulders while I have more important things on.”

“You’re an arsehole, you know that?”

“Fine. Fine, I’ll leave. But you don’t get to — Fuck. Just. Sometimes I really don’t know why I put up with you, Sherlock.”

Heavy, angry steps up the stairs, door slams. Whole of the house rattles like a rustled skeleton. Twiddle phone.

Compose text: Pick up ammonia — S. Do not send.

Compose text: You are my lighthouse — S. Do not send.

Boiled clementines prove too large a temptation — drop three to the floor to investigate splatter pattern. And throw remaining two at the wall.

“And your food processor!”

Should not have cooked in bespoke suit.

Will refrain from repeating with poached pears the boiled clementine experiment.

Survived minor kitchen fire only to be felled by boiling honeygarlicwateroil and flaming pear.

Mrs. Hudson quite a creative cusser.

Cake and roast warming in oven.

Greens tossed with vinaigrette in aesthetically pleasing salad bowl, pears at the ready.

A sturdy primativo uncorked and breathing.

Kitchen not fit for Johns.

“What did you do?” he asks. Voice faint with wonder.

Fling out a hand, push down hot, fizzy sensation rising in stomach. “I made you a glorious feast.”

John strides across sitting room in determined little soldier gait, bypasses table as if no glorious feast sits upon it just for him. Comes up close enough to smell, to detect the spectrum of sandy colours in his hair. Breathe him deep, memorise. John takes injured hand in his own. Suppress instinct to pull it away from him, to hide its ills. Fingers warm, short and staunch, so gentle. Presses lips to back of hand, to wrist, to each suggestion of redness and pain. Heart gone defective, skipping.

“Let me take care of this.”

“A lovely feast, Sherlock, and one that will keep two minutes whilst I exercise my medical license.”

“Fussing over you seems to be my lot in life, yes. Hush now.”

“What’s got into you, then? Cooking?”

“Hate margarine.” Love so much Johnskin, pressed against length of body.

“Oh…kay.” Both syllables drawn out. Have confused him. “It looks gorgeous anyway. I didn’t know you even knew that burners traditionally made food rather than blood type experiments.”

“A meal is merely a symphony of chemical reactions, John.” Sniff. “Of course I can cook.”

“First I’ve heard of it in the five years of our acquaintance.”

“All right, all right. Thank you, Sherlock. It’s beautiful and I can’t wait to eat it.”

John turns off the tap, pats hand dry with small square towel. Smooths ointment over each patch of red.

A sigh. “No. I knew as soon as I got your text that you were up to something on my behalf and just completely graceless at keeping me away long enough to do it.”

John begins to speak. He’s a storyteller, an increasingly good one as time and his blog march on, and seamlessly he brings together the threads with which to weave the tale of his day.

Listen. Listen to his voice, to his heartbeat, to the sound of surgical tape being drawn out, snipped short, and placed just so on gauze to cover injury. Listen to his excitement, his amusement, his hand passing over an ear in a caress, his nails scratching gently at nape of neck. Listen to how well, how thoroughly, how much he cherishes this imperfect moment. Listen to John Watson, who loves you. 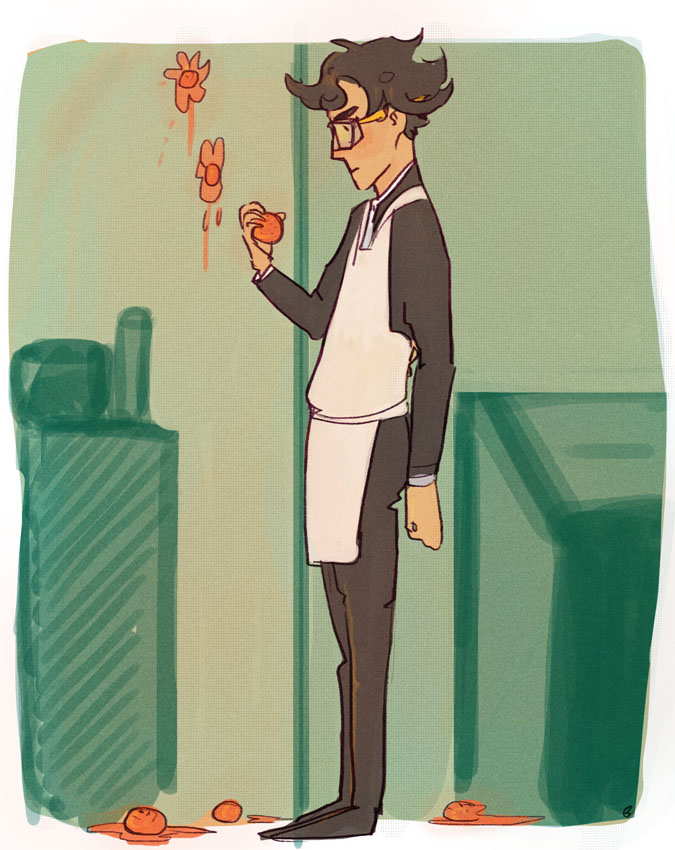 Thanks to White Insomnia for translating this into Korean! Read it here!

And Rapunzel for translating it into Chinese! Read it here!

And Ravenclawesome17 for translating it into Spanish! Read it here!