This PWP (Poem With Porn...LOL) takes place in the AU of "Paper Heart," a due South novella by Tatau, wherein Ray Kowalski’s shirt is stained blue during a knife attack…and it got me thinking about other blue fluids (and about "Blue Boy Magazine"). 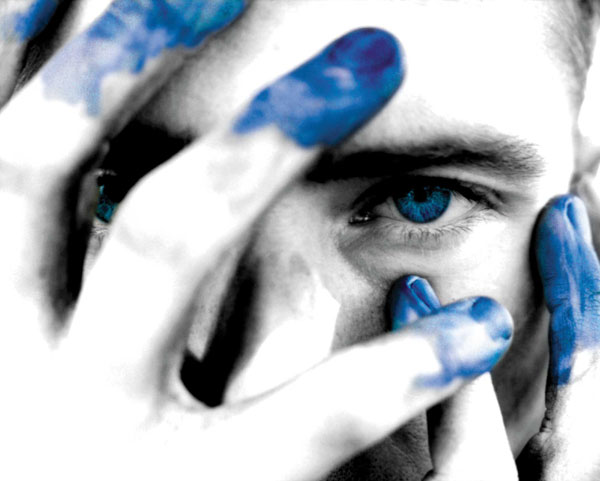 “Bleeding blue”…
they say that’s what true cops do.
And Kowalski is like that,
but he’s also like this :
there was a dark blue stain
where the knife had nicked him,
and Fraser was there the next instant
to check the extent of the hit.
And this is Fraser –
the guy who uses all his senses –
so while Ray was saying
“Huh…knife musta hit
the pen in my pocket…
that was lucky…I’m okay….”
Fraser was looking, touching, smelling, tasting….
ink, yes, but Fraser saw there was no pen
and saw ink welling up at the cut
in Ray’s lightly punctured skin.
Fraser knew then it was about to be
the next chapter in their story.

Fraser had been keeping a journal,
but now the journal is keeping him.
They are in Ray’s apartment,
and Fraser is only thinking
of inking as he’s sinking into blue.
Fraser, writing of Ray day after day,
inking him in, loving him…
and now Fraser’s sinking into blue,
as Ray chants “do me, do me”.
Ray’s blue sweat slick between them
as Fraser presses in and in,
Ray’s blue come spurting out and out
at Fraser’s thrusts that go balls deep.

Then in the first-time afterglow,
Fraser murmurs with wonder “Little Boy Blue”.
Ray, kin to what’s in print, says with a grin
“And I’ll blow your horn…and I’ll come for you.”