sigh it into my mouth 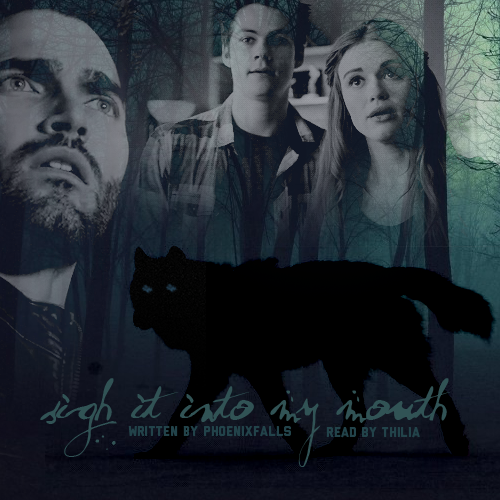 The wolf has no past.

The wolf has forest loam under its paws, soft and cool and thrumming with life. It has fog curling through its coat, faint traces of car exhaust and ocean brine.

It has the scent of prey in its nose, jackrabbiting heartbeat in its ears, anticipation of hot gushing blood filling its mouth with saliva. It has the smooth glide of muscles responding to its will, stalking then leaping then running flat out and the final victorious pounce. It has the moon singing in its veins, midnight light and quicksilver magic.

It howls, and pack answers.

The wolf has kin, has others to hunt and to play and to den with. It can bury itself in a mass of bodies, hot breath shared and long limbs tangled, to groom or to sleep or to just keep warm in the cold winter nights. It is stronger this way. It is faster.

Derek has so much past he’s crushed beneath the weight of it. He has first love turned to dust, second unimaginable betrayal. He has the choking scent of smoke and he has family blood pouring down his arms. He has electricity and wolfsbane so far under his skin he’s surprised his touch isn’t fatal.

He learns every inch of the preserve, knows it by sight and by sound and by scent. He roams the streets of Beacon Hills after midnight, padding silently down concrete bathed in neon and sodium vapor. He grins, all teeth, at those who call him coyote, who dismiss his threat.

This night, late, late at night, he ends up outside the Martin house. Under the last lit bedroom in his territory. He cocks an ear and settles back onto his haunches, soothed by the murmur of pack voices.

One is high and soft; one is low and expressive; they twine together musically, animated and pleased with each other despite their surface bickering.

He needs to be closer.

From the rooftop he can peer through slatted blinds at a room warm like a beating heart: golden lamplight passing through crystal to illuminate deep purple walls, bedding rumpled and broken in with near a week’s worth of scent traces. The girl -- Lydia -- sits against her headboard, old books full of older magic spread across her lap; the boy -- Stiles -- sprawls in the desk chair at an access point for the much newer magic of electronic signals and binary code.

They know he is here. Lydia pushes open her window and gestures him inside impatiently; Stiles shuts the window behind him against the chill night air, nearly catching his tail in his haste.

Lydia’s eyes are wide and concerned, but she stares into his eyes like a challenge. So human. She’s speaking, and after a moment he pulls up enough English to understand the words.

“—something wrong? Is there some new danger?”

The words are never worth it. He lets them slip away again, devoting himself instead to deciphering the language on his nose and tongue, biochemical signals and pheromones.

They do not notice, or at least do not stop him, when he tugs one of the quilts from the bed to curl into in the shadow of mattress and endtable.

He has fallen into a pleasant lassitude when sudden urgency in the boy’s voice causes him to pick up his head, ears pricking forward in alert.

“No, Lydia, don’t call him that. He chose this, is choosing this. If he wants to be an animal, he gets to be treated like one.”

There’s an undercurrent of bitterness to Stiles’s voice. It makes something ache in the wolf’s chest, and he can feel his throat tighten in a whine that he swallows back.

“Oh for—it’s still his name, Stiles. Just because he’s furrier and more wordless than usual doesn’t change that.” Lydia sounds exasperated, but her scent is all anxiety and grief.

“I don’t care. I’m not giving that dog the satisfaction of keeping his name.” Suddenly Stiles is on the floor, in Derek’s face, breath stinking of Fritos and anger. “Hear that, pup? You have to earn your name back, and the first step is shedding that pelt and standing up on two legs again.”

The whine comes out this time, and Derek is torn between wanting to flinch away fearfully or inch forward seeking comfort. He freezes instead of doing either, and after a long, tense moment Stiles lets out a choked sob and turns away, crawling onto the bed to curl into Lydia’s lap. Lydia bows down over him, hair curtaining their faces, arms wrapping around his shoulders.

Derek tastes salt on the air, two sets of tears sliding down delicate skin. He can’t—

The wolf is his refuge. It can’t be a refuge like this.

The room is too cold on his bare skin, and he feels overly large, clumsy, unbalanced in this gangly, muscle-bound shape. His ears and nose are dulled, practically useless compared to the wolf’s senses.

But the world is saturated with color in a way Derek has nearly forgotten, every hue more vibrant, countless variations in tone and shade.

And the grins of profound joy and honest delight that Lydia and Stiles turn on him when they hear his stumbling lurch towards their bed warm him to his core.

Title from this poem, which we were able to source only to an anonymous tumblr post:

PhoenixFalls: I want to thank Thilia, first and foremost, for being a fantastic partner in this project (and for being so patient with my waffling over ship and prompt and basically every aspect of the fic). I also want to thank khasael for being a very encouraging cheerleader when I was feeling frustrated with my (lack of) progress. Finally, I read theumbrellaseller's Surface Tension so many times while writing this fic in the hopes of capturing a little of its magic for myself. If you have any interest in Sherlock and haven't read it before, definitely go check it out!