Betrothed as elflings, Legolas and Lasriel are separated by a tragedy. Centuries later when Elvenking Thranduil and the bride’s mother plan the wedding, making guest lists and selecting wines is easy – the challenge is to hide their dark family secret.

Slightly inspired by the Taiwanese drama Inborn Pair. :) Can be read fandom blind.

Rated to be on the safe side, it will probably be somewhere between Pg13 and M. 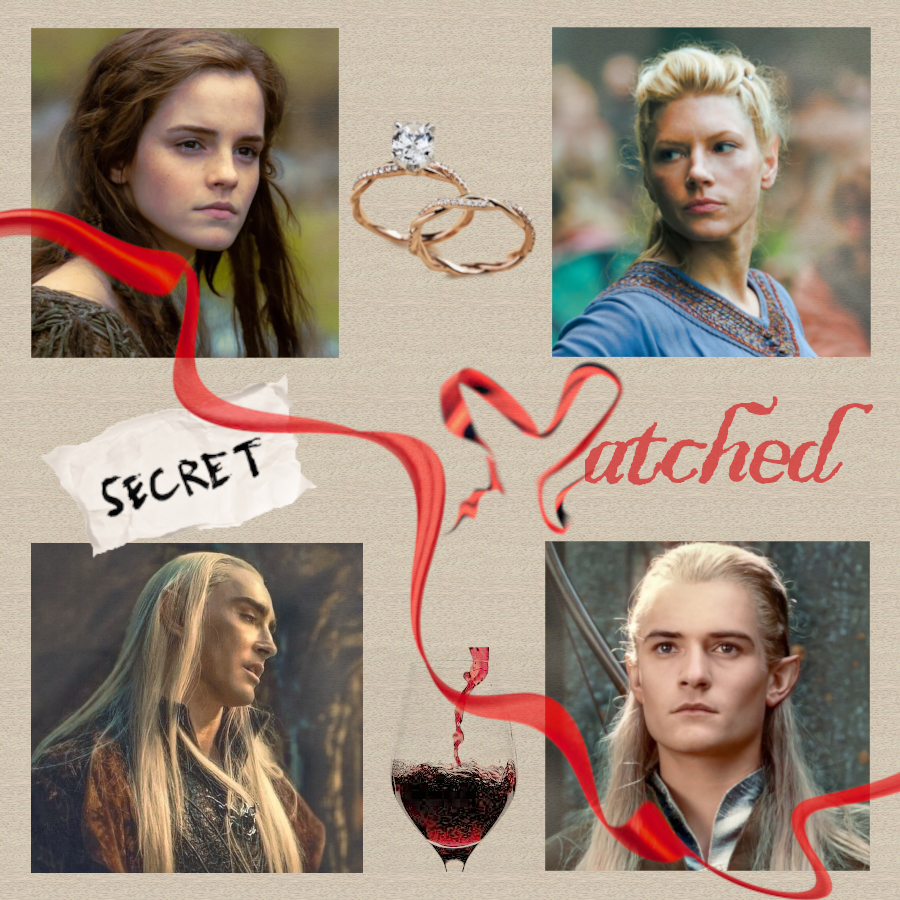 “How dare you? All of you.
Standing around deciding my future?
I am not a prize to be won.”

“I won’t marry you; I’m going to be a warrior.” Legolas released the arrow, hitting the target with a dull thud. “See! I will become the best archer in Greenwood.”

“You missed bull’s eye,” Lasriel huffed. “Also, our adas and nanas say we shall.”

“Whatever.” She changed topic. “You have practiced nearly all day. It’s boring. Shall we go climb trees and see if we can find a bird’s nest?”

“Sure, sounds fun.” When his friend wasn’t going on about marriage, she really had some great ideas. Tossing the bow aside, he started to run. “Last one up is an orc!”

“Ha! Easy win. I was built for speed.” She was close on his heels.

Thranduil followed the running elflings with his eyes, watching them scramble up a thick trunk. It seemed the elleth would win this time.

Lasriel’s mother chuckled. “They are so sweet together.”

“Indeed,” replied Mithrellas, Thranduil’s wife. “Like leaves and branches, as we hoped.” She turned to him and smirked. “I told you so.”

“Our son just said he does not want to,” he disagreed, taking a sip from his cup. The wine was a bit too sour for his taste and he made a mental note to tell his butler not to add this vintage to the collection he was building.

“All young elves say that. You did too, remember.”

He remembered. He also remembered how much he had meant it. “In our case we did not have much of a choice, did we?” He took another sip.

Lasriel’s father had been dozing in the afternoon sun. Now he rubbed his eyes and rose on one elbow. “I know we all agreed on this match when the children were born, but… is it really such a good idea? As you say, Thranduil, our parents did not allow us to choose for ourselves, and we…” He paused. “We were not too happy about it.”

His wife frowned at him. “Those were different times, dear. Our children are growing up in safety and peace; they shall have more freedom. We will encourage the match but never force them.”

“Precisely,” Mithrellas agreed. “Our parents were so much stricter, and what with the troubled times they had lived through, who could blame them? They did what they thought best for us.”

Thranduil didn’t want to be reminded of his parents; the pain was still too fresh. There was peace now, yes, but dearly bought. His mother, father and countless others had paid for it with their lives.

Stifling a wave of grief, he went down to the bridge to chuck pebbles into the Anduin. He drew a few calming breaths, filling his nose with the fresh scent of spring flowers.

This was a well chosen spot for a day out, situated at an equal distance between Greenwood and Lothlórien; his and his best friend’s respective realms. Though they had many obligations as kings, they made sure to see each other regularly here. It was a very long ride but worth the while.

Behind him, the ladies continued to chat amiably, scheming out Legolas’ and Lasriel’s future wedding in detail.

“They must wear matching outfits, of course,” Mithrellas decided.

“I like lavender,” said her friend. “And the flowers could be lavender too.”

“Or roses. White and pink.”

“Lasriel can wear a rose garland.”

“Thranduil must design the rings; did you see the one he made for my last begetting day? Look at the stone.”

“How pretty. Can he make lavender ones?”

Thranduil’s friend joined him on the bridge, chuckling amusedly. “They plan quite far ahead.”

“Pity, if so. After we gave the children matching names and everything.”

Thranduil recalled that naming ceremony and slowly shook his head. Green leaf and leaf garland… It had sounded cute when they were babies, but as they grew older he had realized elflings were not extensions of their parents. They had their own interests and opinions. “We were foolish and should have known better. Love cannot be forced.”

“True.” His friend glanced at their wives, and then silently added: “Or hindered.”

He smiled wryly. “Nothing. Just an old ellon thinking loud.”

Thranduil gave him a playful shove. “Old? You are barely a century older than I.”

“But endlessly more wise.” He tried to muss his hair.

With a polite knock on the door, Thranduil entered his wife’s chambers.

She sat by the window, sewing in the meager evening light. “This is the second pair of hose I must mend only this week,” she complained. “Legolas is such a reckless young ellon. I wish he took after you more.”

Thranduil glanced at his spotless outfit and shrugged. “Ellyn will be ellyn.”

“Little Lasriel is not one bit better though,” she huffed. “I love her mother to bits, but she is very lenient. A parent needs to be tough but fair.”

“About that… being a parent, I mean…” Thranduil took a seat opposite to her. “I think Legolas would like a sibling.”

She stiffened. “So that is why you came tonight?” Her eyes had not left her work.

“I just think it may be time.”

“Well… You know how hard it was for me, having Legolas; I am not ready yet.”

“It has been almost twenty years.”

“I would not presume to know what giving birth is like. Yet…” He looked at his fingers, twisting one of the rings absentmindedly. “Are you implying you want no more elflings? Ever?” The thought of never holding a baby in his arms again was disheartening.

“I did not say that. We will see in another decade, maybe.”

“Wait…” She looked up at last. “I was invited to visit Lothlórien over the summer. Do you mind if I do? It would only be for a couple of months.”

“Whatever you wish.” He and Mithrellas weren’t exactly close and Legolas was busy with lessons and training. Having relatives in Lothlórien, his wife had always spent much time there.

The only drawback with her absence would be that he had to mend their son’s clothes.

The evenings were growing darker, Thranduil noticed as he put his autumn crown down on its stand. Sighing, he lit an oil lamp and picked up Legolas’ ripped tunic instead.

Was his wife not coming back soon? A couple of months, she had said, but it had been at least four now.

A palace guard entered. “A messenger for you, my lord.”

Thranduil put the needle down. “At this hour? Tell him to come back tomorrow.”

“He insisted it cannot wait.” The palace guard opened his palm. “He said to show you this.”

It was his wife’s wedding ring.

In the next chapter some time has passed... but a thousand years are a mere blink in the long life of an elf. ;)

This story can be read without prior knowledge of the movies or books. It will focus on relationships – family, friendship, love – and how to make them work. Jane Austen meets Middle-earth. :) I’ll try to post new chapters weekly.

Note: I’m Swedish and have no beta reader, which means there can be weird word choices and errors sometimes. If you see something looking off, I appreciate being told so I can change it.