Denial and the Kinsey Scale

A series of vignettes in which Scott discovers something startling about Stiles and Derek.
And also about himself.

For doctorwolf, who left this comment on Bite Marks and Bendy Straws: Omg, I just imagined that Stiles would be oblivious to it all, but Scott would notice. He'd see right through Derek's seedy plan. He'd know exactly why Derek says, "look Stiles, I got you a walking dead t-shirt, you're an extra small right? No? Well why don't you try it on, maybe you'll stretch it out?" And poor Scott can't convince Stiles that Derek is being a huge perv, because Stiles is just too confused by the idea of people thinking he's hot.. 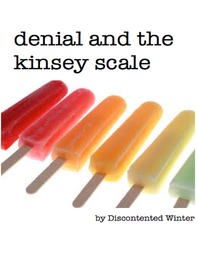 Scott McCall isn’t exactly the sharpest tool in the shed. That’s what Mr. Harris, his asshole chemistry teacher said once. “McCall,” he’d sneered, “you’re not exactly the sharpest tool in the shed, are you?” And Scott had just shrugged and let the insult roll off him while, beside him, Stiles had seethed and muttered under his breath and probably planned six hundred different types of intricate bloodthirsty revenge on Harris by the end of class.

Really though, what Harris said didn’t bother Scott that much at all. He’s used to not being the smartest guy in the room. He’s been friends with Stiles since they met on their first day of kindergarten, after all. If Scott was uncomfortable with being made to feel dumb, he wouldn’t have been Stiles’s best bro since forever. Which isn’t to say that Stiles ever intends to make Scott feel stupid, not the way that Harris does, but he does sometimes start randomly talking about string theory. Which, Scott is fairly sure, has nothing to do with actual string, but the other details kind of escape him.

Scott is so used to Stiles being right about things—even the werewolf thing—that it takes him weeks to realize that maybe, just maybe, Stiles isn’t as smart as everyone thinks.

In fact, when it comes down to it, Stiles might be dumb as a box of rocks.

There’s this incident with a kelpie, which is this monster that is like a horse that lives in water. Scott doesn't really get the specifics, but he remembers Stiles standing at the edge of the water yelling directions to him and Derek and Isaac, and then, suddenly, the kelpie was pulling Stiles into the water. Allison fired a few arrows at the kelpie, Derek pulled Stiles free, the monster-water-horse-thing is dead now, and they’re back at Derek’s loft. Stiles has just climbed out of a hot shower and, dressed in only a towel, is complaining loudly to anyone who will listen—Scott, basically—that he had it totally under control and didn’t even need rescuing.

“Uh huh,” Scott says. “Dude, stop showing your nipples off to my girlfriend.”

Stiles squeaks, as though he remembers Allison for the first time, and turns bright red. “Derek, do you have some clothes I can borrow? Derek?”

Scott turns around to look, and Derek’s just… just staring at Stiles.

“Derek! I need to not be naked!” Stiles exclaims.

Derek turns around so fast that he almost walks into a wall.

Scott looks back at Stiles, who’s so embarrassed by Allison’s cheeky smile that he doesn’t seem to notice.

A few weeks later, at a pack meeting, Derek throws a balled up bundle of fabric at Stiles. Stiles catches it against his chest, eyes wide, and shakes it out.

“Dude!” he exclaims. It’s a Walking Dead t-shirt. “This is awesome!”

Stiles doesn’t seem to think so. He’s already rushing off to the bathroom to put the shirt on. When he comes back wearing it, it’s obviously at least two sizes too small for him. It’s clinging to him like a wet tissue.

“It’s a bit small, but I think I can pull it off,” Stiles says cheerfully.

Derek is looking at Stiles, his gaze fixed on him as he tugs at the shirt and runs his hands over his chest. It’s the same look Scott’s seen him give his enemies: narrow and heated. Derek looks about three heartbeats away from shifting, actually, like his wolf is really close to the surface.

“Dude,” Stiles says, grinning at him. “Is this revenge for the cousin Miguel thing?” He tugs at the shirt and his eyes go big. “No fit, Derek!” Then he bursts out laughing. “But I love it, seriously, thanks.”

Derek seems to shake himself awake. He grunts, and then goes into the kitchen.

Stiles plops down onto the couch, still grinning. He catches Scott’s eye. “What?”

“There’s something weird going on with them,” Isaac whispers one night, twisting his head to look over the back of the couch toward where Stiles and Derek are arguing in the kitchen.

“Yesterday, I tried to take a Popsicle out of the freezer and Derek got all growly and up in my face, and said they were just for Stiles.” Isaac’s eyes narrow. “It was kind of…strange.”

Stiles comes bouncing out of the kitchen with a Popsicle. “Hey, guys. What’s up?”

He extends his tongue and licks up the length of the Popsicle. Then he sucks on the end, smacking his lips.

In the kitchen, Derek drops a plate and it smashes on the floor.

“So much for wolfy ninja reflexes,” Stiles grins, and slurps loudly on the Popsicle again.

He must’ve really liked that plate.

Three nights later, Scott’s making out with Allison when it suddenly hits him. “Oh my god, Stiles!”

“No, um, okay, I think I just figured out something big.”

Allison blinks at him. “Please don’t tell me I owe Lydia twenty bucks.”

“What?” Scott wrinkles his nose. “No, I think that Derek has a crush on Stiles! He looks at him the way I look at you.”

Allison’s jaw drops. “Derek and Stiles?” She draws a breath, and nods slowly. “Oh my god, maybe. Yeah, I can see it.”

Scott leans forward to kiss Allison again, tangling his fingers in her sweet-smelling hair, and then pulls back again. “Wait. What did you mean about the twenty bucks?”

Yeah right. They’re totally going to talk about this.

Scott isn’t the most devious guy on the planet. He’s not good with subterfuge. So it’s kind of awkward to tackle the subject with Stiles. He waits until they’re in the middle of a Call of Duty marathon one Friday night.

Stiles shrugs. He’s busy setting up a claymore. “I guess.”

“I mean, I don’t even know what the Kinsey Scale has to do with Economics,” Scott says. Actually, he’d been the one who asked Coach Finstock before class if the Kinsey Scale and the economies of scale were the same thing. It was worth getting smacked around the back of the head when Finstock had gone off on a tangent in class, talking about how some girls liked girls, and some boys liked boys, okay, and some girls and boys moved up and down the scale at different points in their lives, and there was nothing wrong with that, okay, and nothing was written in stone, and Greenburg you’d better be listening…

Actually, maybe Scott was getting better at subterfuge.

“Who even knows how Coach’s brain works?” Stiles grins.

“It was interesting though,” Scott says. “Like how it’s okay to be with who you want to be with, and stuff, and to maybe not have everything figured out yet.”

He knows he’s got Stiles’s attention when Stiles pauses the game and sets his controller aside, and looks at him seriously. “Scotty, is this about you and Isaac?”

Stiles looks sympathetic. “Because I’ve seen the way you look at each other, dude, and it’s cool, okay? I mean obviously there’s some stuff you’d need to deal with because of the whole Allison situation, but if it’s something you want to explore, then you should totally go for it.”

Allison thinks it’s hilarious when Scott tells her. And then she goes quiet for a long moment, and twirls her hair around her finger the way she does when she’s deep in thought.

“Isaac?” she says at last, her eyes wide.

“No, that’s not the point of the story!” Scott exclaims.

A week later, Stiles is at the loft wearing the Walking Dead shirt again, and Scott just snaps. He grabs Stiles by the wrist and drags him into the bathroom, and shoves him up against the wall.

Stiles barks out a laugh. “Um, sure it is, bro. Derek Hale thinks I’m hot. Have you seen Derek?”

Scott rolls his eyes. “He follows you around everywhere. He keeps climbing in your window. He bought you a shirt that is way too tight on you. He buys Popsicles and bananas and lollipops that the rest of us aren’t allowed to touch, and then he stares at you when you eat them. It’s creepy!”

Scott exhales heavily. “Look, you’re my bro, so obviously I think you’re gross, but I promise you, Stiles, whatever you’ve got going on, Derek likes it.”

Stiles gets the same look on his face he did when he was eight and figured out everyone was lying about Santa. Like his whole world has been turned upside down by the discovery, but not just that. Like he’s incredibly pissed at himself for not figuring it out earlier. Stiles hates not knowing exactly what’s going on.

“I’m hot!” Stiles exclaims. Then he looks outraged. “Why the fuck didn’t anyone tell me?”

Scott isn’t really surprised when, later that night, Stiles calls. He fumbles for his phone. “Stiles?”

“Is it Derek?” Scott asks, shaking his head softly.

“It is Derek. Ten points to Gryffindor.” Stiles lowers his voice. “Scott, it turns out I have game, like a lot of it, and I’m afraid I’m going to use my powers for evil.”

“Just take a breath, okay?” Scott rolls over onto his side. Allison’s still asleep. She looks warm and peaceful, and Scott’s heart swells at the sight of her. “You’ll be okay, Stiles. You’re just over-thinking it.”

Down the hall, the toilet flushes.

“Well, of course I’m over-thinking it!” Stiles exclaims.  “This is big, Scotty. Really big, okay? It’s complicated and grown up, and I don’t think you can appreciate the pressure I’m feeling right now!”

“Oh, okay,” Stiles says, his voice sharp with snark. “Well, when you get in a relationship with a guy, who is also a werewolf, maybe then we can talk about complicated, huh?”

Scott looks up as his bedroom door opens. For a second Isaac is illuminated in the square of light from the hallway, and then he closes the door and slips into bed behind Scott. He curls his fingers around Scott’s hip.

He hears Stiles’s squawk of outrage as he ends the call, and rolls over to press his lips against Issac’s. Isaac sighs and smiles.

Stiles might be smart as a whip but sometimes he’s also dumb as a rock.

He’ll figure it out.