I'll still be here in the morning

With a heroic effort, Grantaire managed to wrench his mouth away from Éponine’s, even as her hands started taking liberties that made his vision go white with desire.

“Ép,” he choked. “W-what are you—” his weak attempt at a protest broke off into a hiss as her hands grew more persistent.

“Let’s forget it all ’Taire,” Éponine rasped. Her lips were at his neck now, and her hot breath ghosted over his skin as he spoke. “Let’s just block it all out. I’ll be your one-night stand tonight.”

So that was it. That was what she wanted.

And honestly, with her on top of him like this, it was hard not to want that too. She was grappling with his belt buckle now, and it would be so easy, so easy to let her...

But she wasn’t his one-night stand.

She was Éponine. His best friend. The person he cared about most in the world.

*Re: the "non-con" archive warning, that's because Éponine really aggressively comes onto Grantaire without establishing consent. She’s super horrified/apologetic when she realizes he doesn’t actually want it, and that she just assaulted her best friend… He’s okay and extremely forgiving... but yah, trigger warning for that plot point.

My piece for The Miserables Month 2022, Day 31. Prompt was "dawn", but I substituted that for "morning", b/c this is a Modern AU and it felt anachronistic/hoity-toity to have them be talking about "dawn".

Éponine could hold her liquor just as well as Grantaire. And she wasn’t afraid to take advantage of this talent. Ever since they’d gotten a flat together, they spent roughly half of their evenings slumped against each other on the sofa, passing a bottle of absinthe back and forth and taking turns knocking it back.

Sometimes they browsed Netflix as they did so. Sometimes they bantered. Most often, they commiserated (having a flatmate who understood the pangs and throes of unrequited love could be a great outlet).

But Éponine always drew a sharp line the minute it passed midnight.

“Okay ’Taire,” she’d say, “Time to put the strong stuff away and hit the sack. It's morning now, and you know what they say about drinking in the mornings.”

Grantaire was pretty sure that when people talked about “drinking in the mornings”, they weren’t referring to staying up past midnight. Further, he was surprised that Éponine cared what “they” said about anything. She was the kind who went through life with her middle finger permanently on display before society.

But eventually, Grantaire came to understand that this was Éponine’s way of taking care of him. “So long as I’m your best friend,” he could almost hear her vow, “I won't let you completely fuck your life up as a chronic alcoholic.”

Given all that, Grantaire was surprised when, this time, Éponine didn’t put the bottle away at midnight.

She’d been sulky all evening, but that wasn’t totally out of the ordinary. It took this to make him realize that something was perhaps really wrong.

“Ép…” he asked hesitantly, eyebrows drawn together in concern as he watched her take another swig of absinthe. “You alright? Did something happen today?”

Éponine glowered into space. “Nope,” she said shortly. “Nothing happened today. Same as every other fucking day for us, wasn’t it?”

Grantaire’s frown deepened. “What are you talking about?” He stretched an arm out to her, aiming to touch her in some comforting way — but he froze when her head snapped up and her eyes flashed at him wildly.

“Don’t you ever get tired, ’Taire?” Éponine's voice was sharp, angry.

“… Tired?” Grantaire eyed Éponine with considerable anxiety. “Of... what?”

Éponine huffed out a dry laugh. The sound was utterly void of any amusement. “Of what? Of being us.” She flapped a hand, gesturing between the two of them. “Of all this stupid pining, unrequited love shit. Of spending 90% of your brain space trying to figure out how to get him to just look at you. Only to feel worse when you finally succeed, because when he does look at you it’s in a ‘please get out of my face’ way. I’m just so...” she broke off into an angry grunt… which also sounded a little like a sob. “I’m just so done!”

With that Éponine chucked the near empty absinthe bottle to the floor and threw her hands over her face. Grantaire gazed at her with the anguish of sympathy, concern — and yes, understanding. Of course he knew how she felt, and of course he got sick of it. Some days he too wondered if his heart could take it anymore. Some days he too felt on the verge of a breakdown… But right now, breaking down was the farthest thing from Grantaire's mind. Because here in front of him was Éponine, with her face in her hands. Here was Éponine, needing him.

“Ép...” Grantaire again reached for her, this time completing the motion. He brought his hand to the side of her still hidden face, fondling it a moment. Then he moved it behind her head and began carding his fingers gently, soothingly through her hair. She let him do it, and for a minute Grantaire almost thought she was starting to relax. But then she lifted her face from her hands, and the expression in her eyes made him go cold.

Her eyes were lit with a hard determination. That in itself wasn’t at all unusual for her, but there was something different about the determination this time... There was an angry “fuck this” element to it, which thoroughly unsettled Grantaire. It made him fear finding out what exactly Éponine had determined to do…

And then she launched herself forward and kissed him.

Her lips and teeth crashed clumsily, painfully against his. Her hands scrambled up to his shirt and clenched into fists around the fabric, tugging him towards her as she surged forward.

Grantaire had let out a muffled gasp of surprise — but the gasp turned into something else as she forced his mouth open and plunged her tongue into it. Her tongue seemed almost sharp as it dove around the inside of his mouth. Sharp, aggressive, and impudent, like Éponine herself.

She pulled and sucked at his lips and Grantaire felt his brain go foggy, even as his senses grew more alert, more alive.

What the hell was happening?

This was Éponine... He was Grantaire. They were flat-mates, best friends. They wallowed and commiserated together about their unrequited love for Marius and Enjolras. They didn’t.... they didn’t do this.

Éponine had pushed him onto his back now and she was on top of him. He felt every point of contact of their bodies — her mouth against his, her chest against his, her hips and thighs against his. He couldn’t help it — he groaned. That seemed to encourage Éponine and she pressed into him harder, driving her hips forward in a way that made his head reel.

With a heroic effort, Grantaire managed to wrench his mouth away from Éponine’s, even as her hands started taking liberties that made his vision go white with desire.

“Ép,” he choked. “W-what are you—” his weak attempt at a protest broke off into a hiss as her hands grew more persistent.

“Let’s forget it all ’Taire,” Éponine rasped. Her lips were at his neck now, and her hot breath ghosted over his skin as he spoke. “Let’s just block it all out. I’ll be your one-night stand tonight.”

So that was it. That was what she wanted.

And honestly, with her on top of him like this, it was hard not to want that too. She was grappling with his belt buckle now, and it would be so easy, so easy to let her...

But she wasn’t his one-night stand.

She was Éponine. His best friend. The person he cared about most in the world.

Grantaire pressed both his hands to Éponine’s shoulders and shoved. “Stop.” His voice came out firm — but he hoped not angry.

Éponine fell back onto the sofa, stunned. She blinked up at him in confusion for a few moments… and then the confusion transitioned into horrified shame.

With a convulsive movement, she pushed herself into a seated position. Then she turned her face away from him. Something about the latter gesture made Grantaire’s heart ache.

He watched as a ragged breath shook Éponine’s shoulders. When finally she spoke, her voice was hoarse.

Her small frame was trembling. As best as Grantaire could tell from her side profile, she appeared to be crying. Pushing himself up from the couch as well, Grantaire reached both arms towards her and strove to pull her into a hug from behind. But as soon as he made contact, her head jerked around and she scrambled away from him.

“I just fucking assaulted you, ’Taire.”

He opened his arms to her and waited. She stared at him with wide, tearful eyes. Then a sob ripped from her throat and she fell forward onto his chest. He wrapped both his large arms around her and held her tightly, rocking her from side to side as she cried.

“You idiot,” he breathed softly, affectionately into her hair. “Next time you want me to help distract you from Marius, just ask me to watch Gilmore Girls with you or something, okay?”

She choked and nodded, her face rubbing against his tear-soaked shirt. “I’m sorry.”

She cried against him for a long time. He wasn’t entirely sure how many minutes passed, but it was bound to be in the double digits.

Finally, he pulled away from her just enough to look at her face. He brushed his thumb over her tear-stained cheeks, drying them, then pushed some hair gently behind her ears.

Her mouth quirked into a small, trembling smile. “S-sorry,” she said through a hiccup. “I’m supposed to be the one to send you to bed when it’s morning.”

Grantaire shrugged and dropped his hand to her back, rubbing a few circles on it. “That’s alright. We can take turns taking care of each other.”

Éponine breathed out a tearful laugh.

Grantaire gave her a small nudge, prompting her to get up off the sofa. “You have a unit test tomorrow, Ép. Go on and get some sleep.”

Éponine’s bottom lip protruded in a pout. Then she sidled closer to him, nuzzled her head under his arm, and wrapped her own arms tightly around his middle.

Grantaire chuckled and ground his knuckles gently on the top of her head. “You know if you go to bed, I’ll still be here in the morning,” he said. “Er, the later morning I mean.”

Éponine sighed contentedly. “And you’ll be here with me every morning after that, right ’Taire?

Grantaire smiled. Overtired, semi-intoxicated Éponine was softer than daytime, sober Éponine. She was much more apt to say mushy things like that… He didn’t mind at all.

“Yes, Ép.” Grantaire tucked an arm around her side and gave her a loving squeeze. “And every morning after that.” 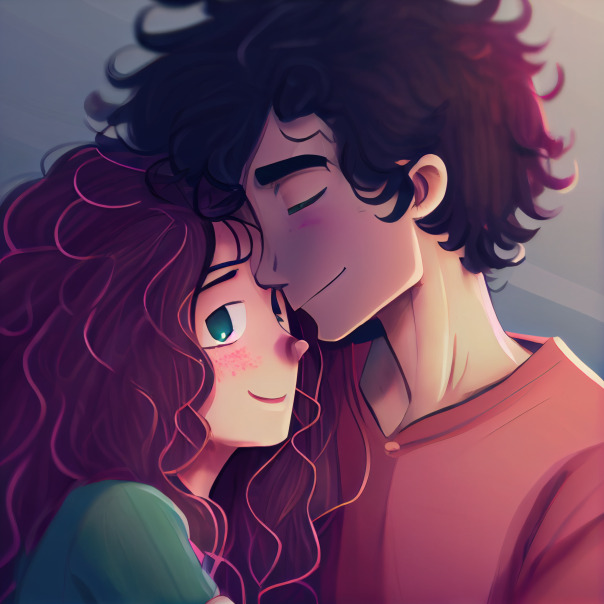