Wizard Flimpetyflomps and his Magic Spoons

The first Flimpetyflomps story to use photos of toys. 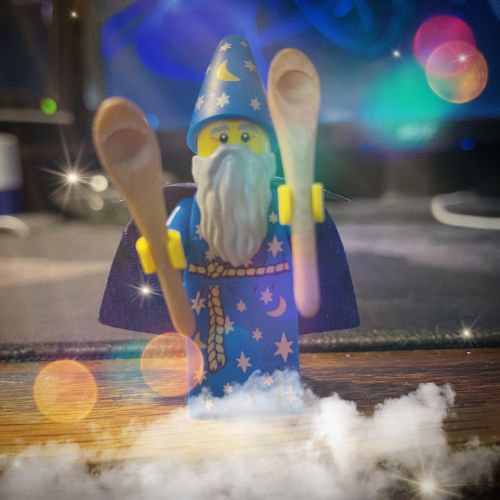 Wizard Flimpetyflomps and his Magic Spoons. 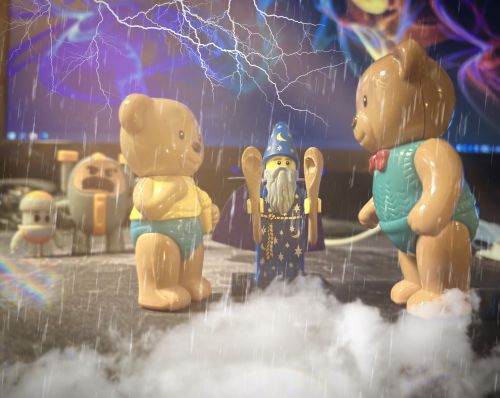 One stormy night, Wizard Flimpetyflomps met with Little Bear and Uncle Bear to discuss the magic spoons. Little did they know, Grandmaster Glitch was watching from the distance, plotting… 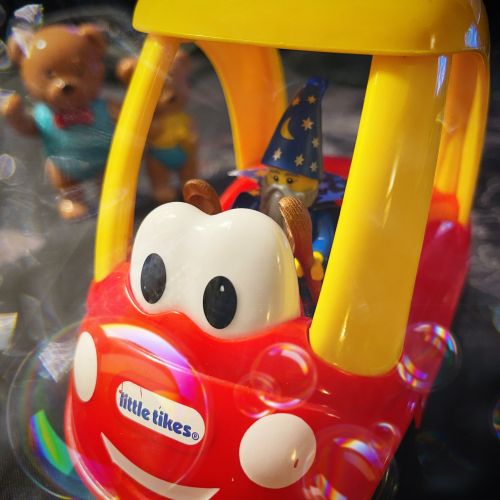 The bears suggested Flimpetyflomps should speak to his brother about the Magic Spoons, so he hopped into his car and headed off to the City at the Centre of the Earth. 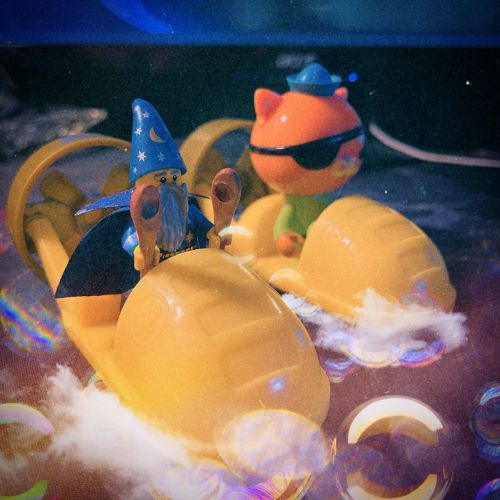 When the road ended in swampy marshland, Flimpetyflomps found an old friend waiting with the vehicles that would take him on the next part of his journey. Time to do things the pirate way! 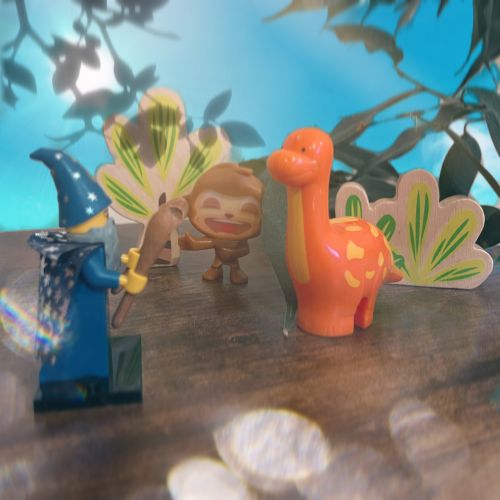 As the swampy marsh gave way to jungle, Flimpetyflomps bade farewell to Kwazi and continued on foot. Soon he came to the home of another friend, Dave the Dinosaur. Here he rested for the night and feasted on Dave’s fabulous pineapples and coconuts. 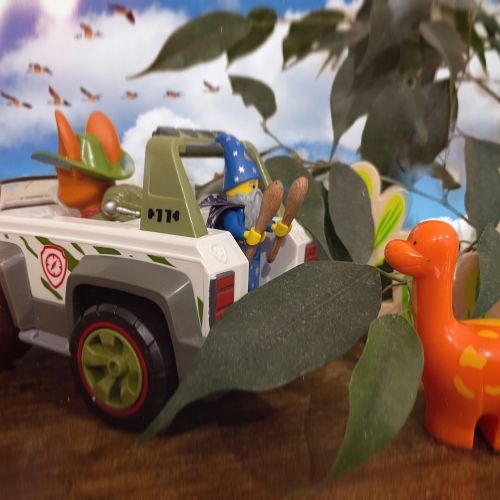 The next morning, Flimpetyflomps thanked Dave for letting him stay the night, then heading off through the trees on the final overland part of his journey. This time, he had help from a friend who was very good at finding his way through the jungle. 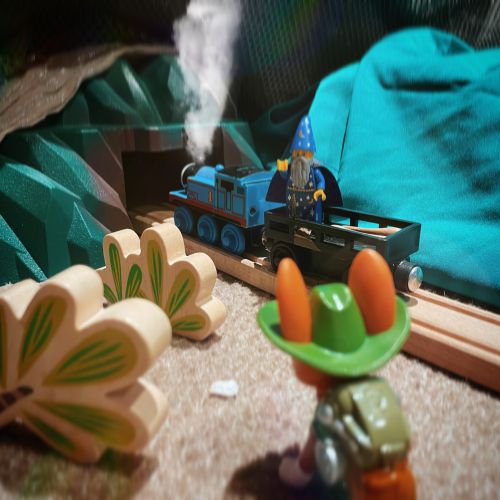 Flimpetyflomps arrived at a huge mountain, at the base was a tunnel entrance. Some train tracks lead into the tunnel and a friendly blue tank engine was waiting for him. He laid his spoons down in the truck at the back and climbed aboard. Waving goodbye to Tracker, he entered the tunnel and was soon heading down, down, down, towards the City at the Centre of the Earth. 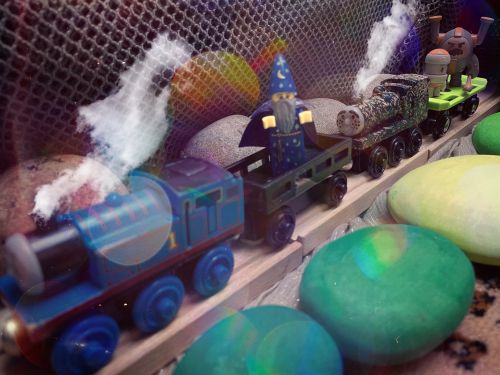 Then there was trouble! As Thomas and Flimpetyflomps zoomed down the tunnel, Grandmaster Glitch pulled up behind them on Tom Moss and one of his Grimbots flew over and took the magic spoons! “At last!” yelled Glitch, “the spoons are mine, nothing can stop me now!”. 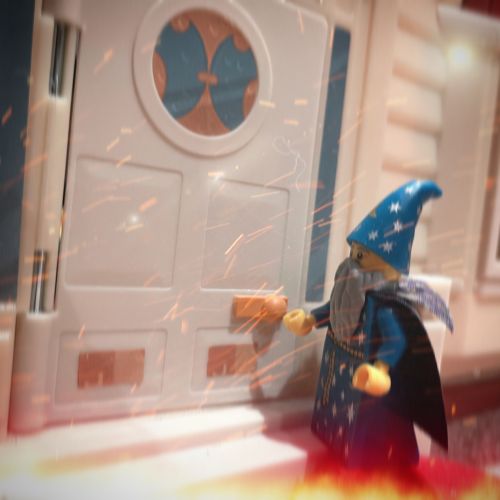 It was a very sad Flimpetyflomps who chuffed into the City at the Centre of the Earth the next morning. He’d lost the spoons! He made his way through the streets and over the Lava River towards his brother’s house. His brother would know what to do, after all, he was the Mayor of the City, but more importantly, he was also… 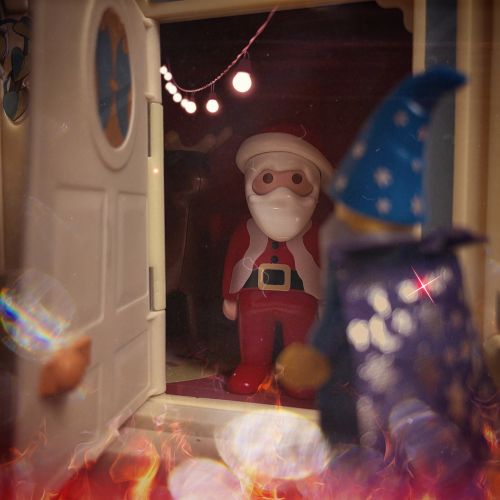 …Father Christmas! “Oh Flimpetyflomps” he said. “The spoons! We must get them back!” “I know,” said Flimpetyflomps. “They’ve not been out of my sight since the Wood Witch entrusted them to me all those years ago. Grandmaster Glitch mustn’t be allowed to unlock their power!” “It’s Ok” said Father Christmas, “I have a plan. Come inside.” 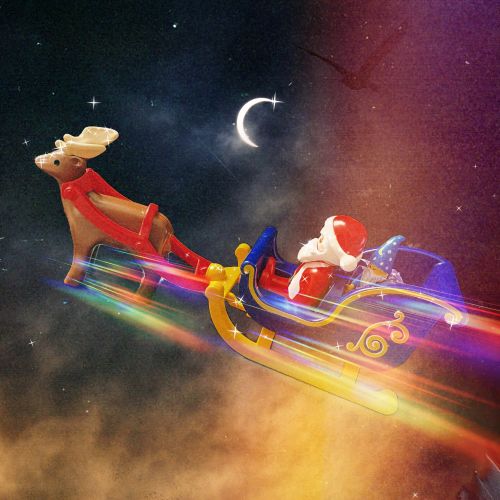 “Now that he has the spoons, Grandmaster Glitch will probably try and head back to Mars” said Father Christmas. “Little Bear and Uncle Bear have been orbiting the Earth in Little Bear’s space rocket, keeping an eye out for Grim HQ. We’re going to head there now in my sleigh to meet with some other friends who are going to help us”. So they climbed into Father Christmas’s sleigh and headed up the tunnel, out of the mountain and up into the night sky. 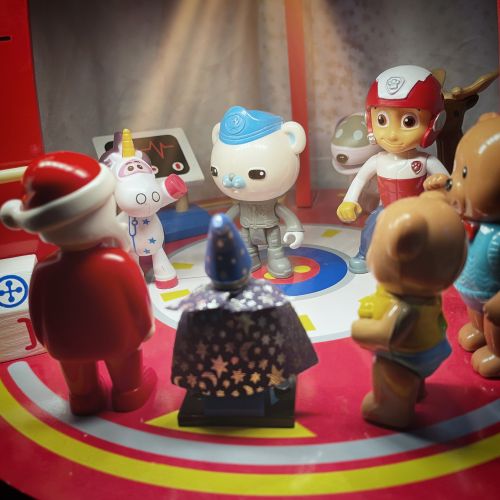 Once aboard the space rocket, Flimpetyflomps and Father Christmas found three people waiting with the bears in the control room. Ubercorn had lots of experience foiling Grandmaster Glitch’s plans, so he and the Go Jetters offered to search the skies and help the others with some funky facts about Glitch and his Grimbots. Captain Barnacles said he and the Octonauts would spread out in their gups and cover the oceans, while Ryder and the Paw Patrol searched on land. “Team Flimpetyflomps,” said Captain Barnacles, “let’s do this!”. 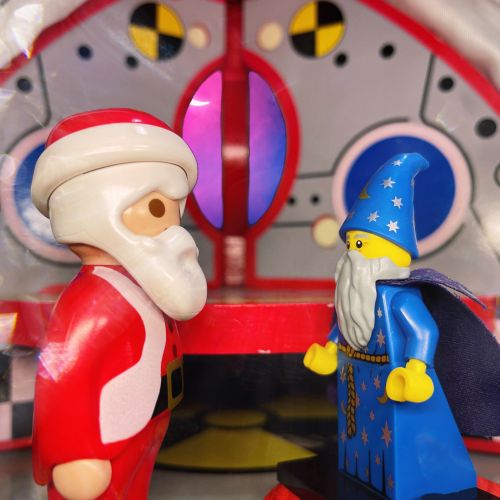 After the others had gone, Father Christmas met with Flimpetyflomps in the docking bay. “I have to return to the City” he said. “Glitch is sure to come after our Crystal next, without it the City won’t be able to survive, and who knows what Glitch could do if he managed to combine the power of the Crystal with the power of the Spoons”. He left in his sleigh and Flimpetyflomps headed back to the control room to speak to the Bears. 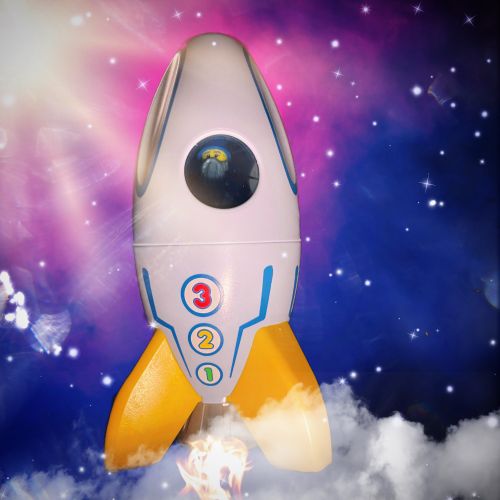 The Bears suggested that Flimpetyflomps visit each of the helping teams at their headquarters to help them understand the Spoons. Little Bear let the wizard borrow his mini rocket and he soon found himself heading down towards the cloudy skies of Earth. Alone with his thoughts for the first time in days, he realised how much he missed the Spoons. 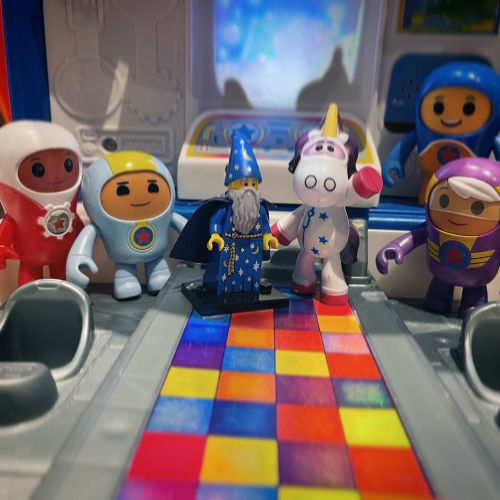 First of all, Flimpetyflomps visited the Go Jetters who were handling the air search from Jet Pad. He told them how the Wood Witch had carved him the Magic Spoons when he was a young wizardling. He’d used them for his spells ever since and they could channel the old wild magic that came from nature. In return, Ubercorn showed him 3 funky facts about Grandmaster Glitch. Flimpetyflomps agreed to pass this on to the others. 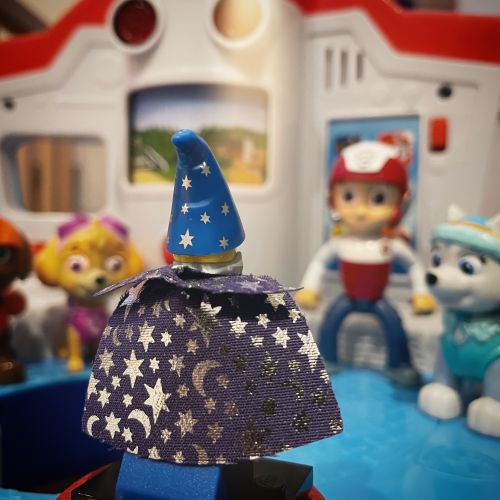 Next Flimpetyflomps visited the Paw Patrol in Adventure Bay. He passed on the funky facts from Ubercorn and talked about the Magic Spoons and what to look out for. The pups said they would search from Foggy Bottom to Barkingburg and not stop looking until the Spoons were found. Flimpetyflomps thanked them then climbed back into the little rocket and prepared to activate underwater mode. 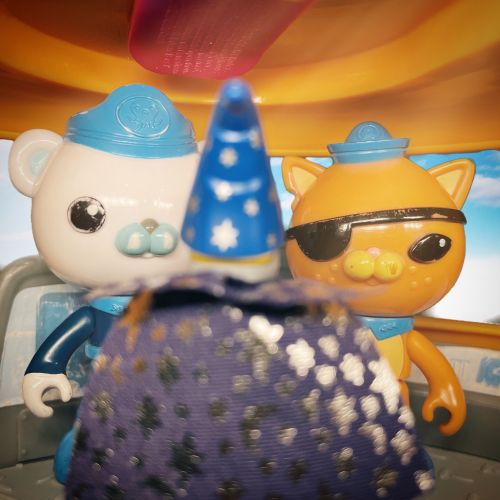 And finally Flimpetyflomps visited Captain Barnacles and Kwazi in the Octopod. They told him that all the Octonauts, including the Vegimals, were out in the gups searching the rivers and oceans, from the sunlight zone to the midnight zone, for traces of rust and moustaches. “If he’s out there we’ll find him, you mark my words” said Barnacles. 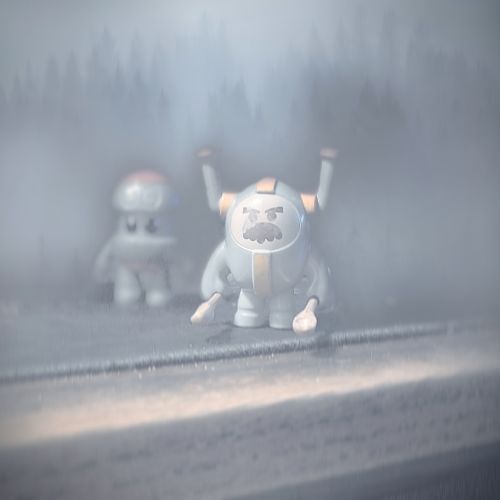 Meanwhile, Grandmaster Glitch had found a very foggy place to hide. He shook the spoons angrily. “Why won’t they work?” he complained. “Grimbots! Make them work!”. “Maybe I can help,” said a shadowy, behatted figure emerging from the fog. “After all, us moustachioed miscreants should probably stick together.” 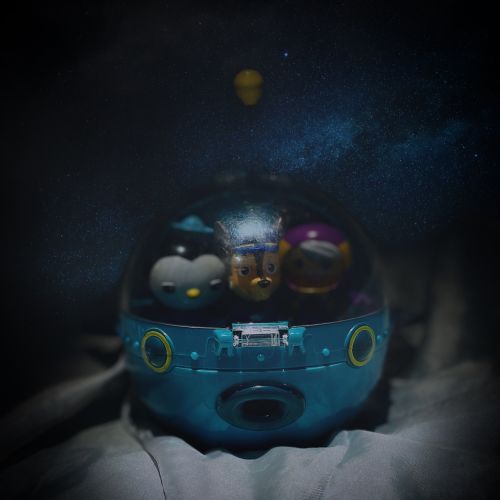 As Glitch listened to Mayor Humdinger’s plan, little did he know that this time he was the one being watched. Three heroes in a gup on a foggy beach heard everything that was said. “Oh no!” said Peso. “We must stop them from reaching the Planet of Custard or else all is lost! Sound the Octo-alert!” 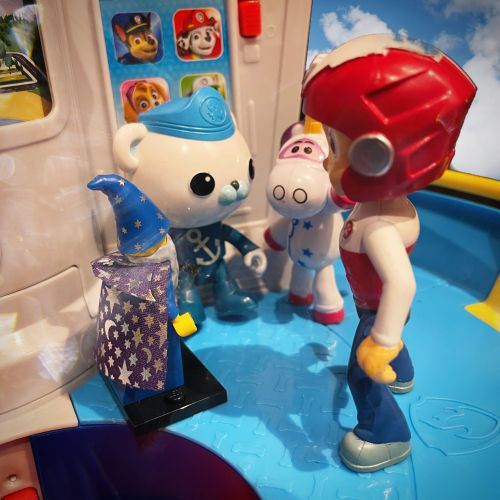 After Peso, Chase and Xuli made their report, the leaders met in the Paw Patrol Pup Tower to come up with a plan. “We need to get the Spoons back before Glitch and Major Humdinger leave for the Planet of Custard,” said Flimpetyflomps. “Now we know where they are, we’ll have to send in a team to retrieve them tonight. Each of you must pick your best person for this job. Tell them to meet me in Jet Pad in one hour for a mission briefing”. 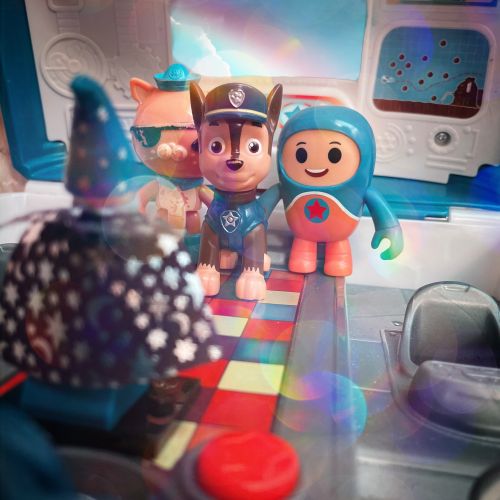 An hour later, three heroes stood before Flimpetyflomps in Jet Pad. The wizard outlined his plan. They were to sneak into Foggy Bottom late at night when Glitch and the Mayor were asleep. Kyan would use his fantastic gymnastics to jump into one of Grim HQ’s chimney stacks. He would then open the door and let the others in. Chase could sniff out the Spoons with his police dog’s nose and Kwazi could use his pirate sword fighting skills to deal with any Grimbots. The plan was complete, now they only had to wait for night to fall… 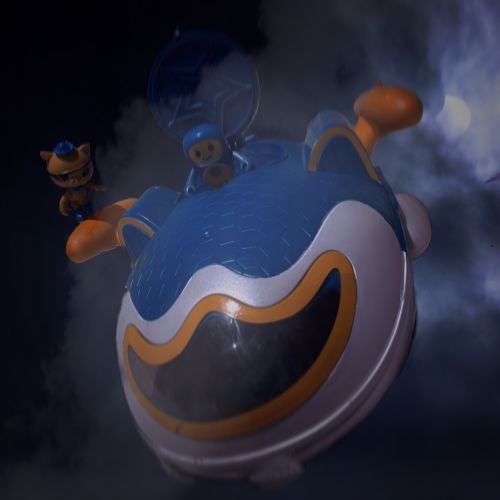 And as soon as it was dark, they were off. Jet Pad swooped silently down over Foggy Bottom. Chase was the first to jump off, his senses alert for any signs of Grimbots or kittens. Kwazi was second, and for once he was silent and stuck to the plan. Kyan was last, leaping to the ground with his fantastic gymnastics. Jet Pad vanished up into the mist, and they were on their own. 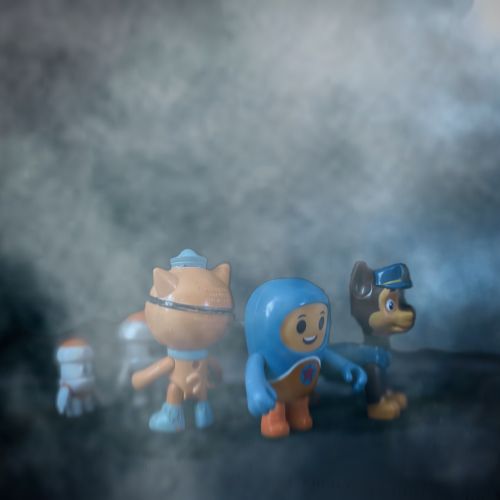 As they followed Chase’s nose through the darkness, two Grimbots suddenly emerged from the fog. “I’ll handle these scurvy dogs Mateys” said Kwazi, “you go on ahead and get those Spoons!” So Chase and Kyan ran on towards the huge blob of darkness ahead that was Grim HQ. Kyan crouched down then leapt up as high as he could. He landed with a soft clang on the roof of Glitch’s ship and immediately dove into the nearby chimney stack.

Kyan slid down the chimney stack and landed with a bump in the cold, metallic darkness. “Now to find the door controls and let Chase in,” he thought to himself. “It’s so dark, I think I’ll activate my night vision visor rather than use a torch”. He activated his visor and immediately jumped back, startled at the green figure who he suddenly saw before him. “Going somewhere Kyan?” said Glitch. 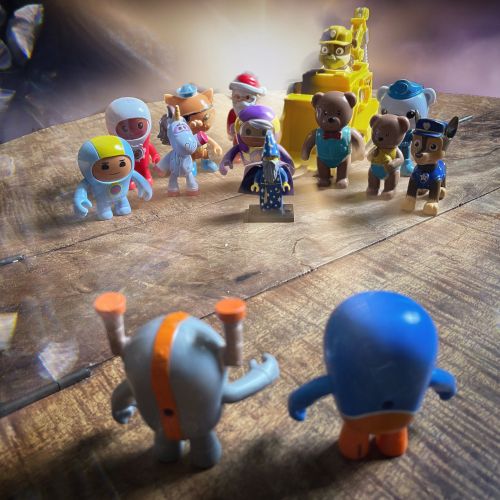 “You’re all alone and trapped in my HQ little No Jetter” said Glitch. Suddenly there was an almighty bang and a crash, and the HQ was flooded with bright light. “No Go Jetter is ever truly alone” said Ubercorn. “Nor is a friend of mine” said Flimpetyflomps. “Give it up Glitch, Mayor Humdinger has fled and you’re the one who is alone”. “Grimbles!” said Glitch in a little voice. 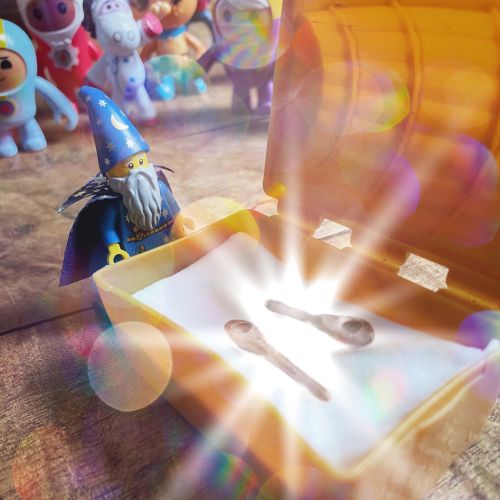 A defeated Glitch showed Flimpetyflomps where the Spoons were hidden in a treasure chest. The wizard opened it and immediately the Spoons began to glow as they recognised their true guardian. “At last” said Flimpetyflomps as tears of joy filled his eyes. He picked up the Spoons, and turned to face his friends who cheered and shouted with joy. The Magic Spoons were safe, the World was saved. 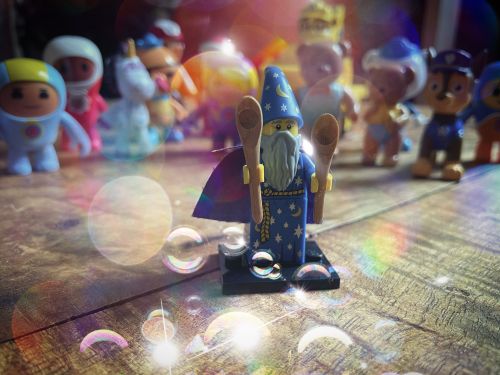 Flimpetyflomps turned away from his friends. The Magic Spoons overflowed with joyful, magic bubbles, but the wizard was worried. Now that Glitch and his associates knew about the Spoons, they would surely try to take them again. He would have to find somewhere safe to hide them, but first… 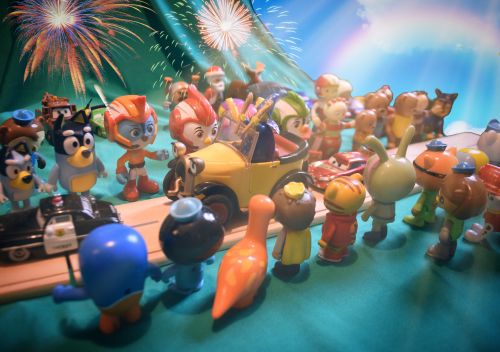 …a victory parade! Flimpetyflomps was given a special escort along the road to Flimpetyflomps Castle. Crowds of people lined the route, cheering and waving, all happy that the Spoons were safe. Flimpetyflomps smiled and waved back, but he knew he had a tough decision to make once he was home. Where to hide the Magic Spoons? 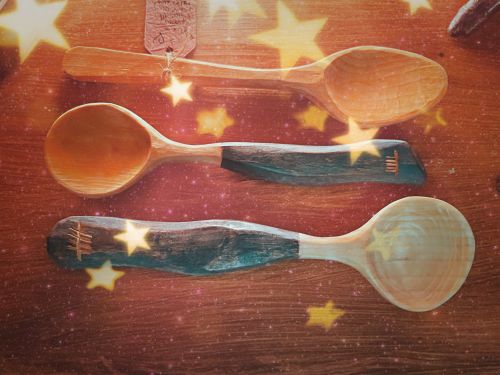 Back in his castle, Flimpetyflomps headed to his spoonery, sighed and sat at his desk. He used the Magic Spoons to create a conduit spoon so he could use them from afar. He then wrapped them in brown paper and whispered a spell. The Spoons disappeared. They would be safe on Bramble Hill with their new guardians, Arthur & Elwyn.