A companion piece for art work, Ashayam, Star Trek Reboot, by my very talented friend, which is included. For Romance, cause I love ya. 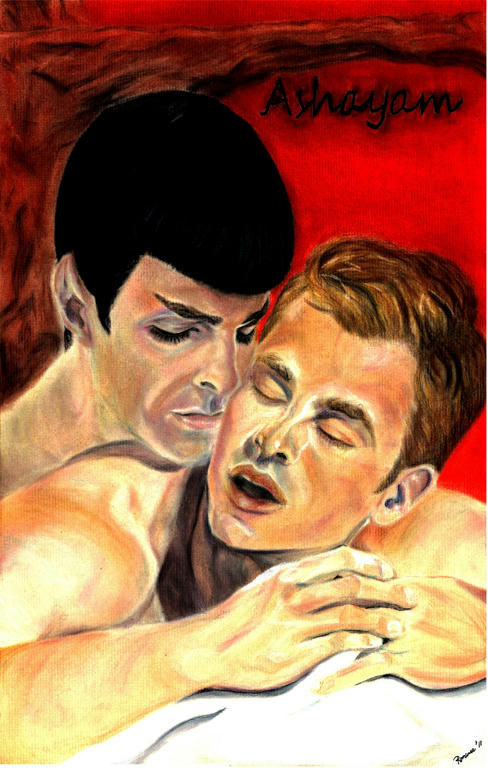 The room is warm, but the floor is cool on his bare feet as he pads across, eyes bouncing around the unfamiliar space, landing on the big bed across from him.

He lies down slowly on his belly, the bedding soft, yet firm under him, supporting and caressing his naked flesh.

He allows his head to pillow on his arms as he waits, feeling his heart beating steadily in his chest, tendrils of excitement roiling through his stomach and he shifts his legs in nervous anticipation.

He can smell strange ozone charged in the air; feel a hot breeze from the open window and see a deep red haze waft along the fading sun light, leaking in around the partially drawn curtain.

This place is so new to him, foreign, a culture and a people he sometimes still struggles to understand, yet he also feels… at home.

Because minutes later, when the bed shifts and goose flesh races along his exposed skin, there is a flush of warmth too, a heavy and solid weight along the length of his spine, the smell of fresh washed skin and natural musk.

No matter where they may lay their heads at night, Spock is his home.

Jim closes his eyes as the bed dips again and soft lips press into tender skin between his shoulder blades. Nimble fingers roam the plains of his back, running over each and every rib of his sides and Jim shivers all the way to his toes.

He tries to push up, to turn, but a palm planted over the center of his spine presses him back to the pillow and he takes a deep breath, nodding, because this is the way Spock likes it, the way he likes Jim to be.

Capable hands lift his hips, fingers digging into bone, marking him. So Jim tucks his knees under him, allowing his limbs to be arranged along with some pillows to support him. And then those hands are running along his crevice. Jim presses forward with a tiny gasp, his cock filling.

Something cool and wet, sweet smelling, dribbles down his ass and over his opening and then Spock’s fingers are easing into him, slick and hot.

He presses forward again, rubbing himself along the sheets, his shaft wedging between a few pillows and then he presses back, taking as much as his lover is willing to give him.

He loves this feeling, being stretched open and full, and the weight along his hips as Spock shifts, moving up and kissing Jim’s lower back and then something much bigger is pressing into him.

He moans low and deep in his throat as he is stretched even more, Spock’s hands planting over his hips as he presses forward, coming to rest his weight along Jim’s back once he’s fully seated.

He allows Jim to just breathe, to take a few shuddering breaths before he moves.

Slow at first, Spock's cock is buried deep, pulsing heat, super nova and Jim moans again, rising a little on his knees and feeling that fiery heat inch in a little deeper.

And then Jim is moving, rising and falling, fucking himself, urging a faster pace.

He works himself like this for a long while.

Breaths hitching in his chest.

Working up a sweat.

When he feels his balls draw close to his body, a hand wraps around the base of his shaft, gripping him hard enough to break his rhythm.

This is the way his lover wants him.

He slows, but doesn't stop, knowing what will come next.

Spock's warm breath his heavy on Jim's damp skin and then he whispers, "Mine."

And he's nodding, because it's true, so true.

He is Spock's and Spock is his.

His lover shifts forward, pulling Jim back and down hard, marking a claim of another sort and then he's moving, pushing Jim away and drawing him back and Jim just hangs on, trying to match his lover’s rhythm, meeting each deep thrust with the slap of skin on skin.

"Oh, ah, umm, ah, uh..." an obscene litany of moans and grunts fall from Jim's lips because this is good, this is right.

He is so close.

The hand on his cock loosens in grip, glides along his shaft from root to tip and he wants more, so much more.

"Please," he says, not sure what he is asking for. "Please," and the hand on him squeezes him just the way he likes, thumbs his tip and he's coming.

He breathes heavy through his mouth, eyes slamming shut as he continues to move against Spock, feeling his lover rest his chin on Jim's shoulder.

"Can you see, Ashayam?" Spock asks, gentling his pace as Jim's body shudders and calms. "Look."

He swallows and opens his eyes, turns his head and looks across the room and to the window. The curtain is blowing on the light evening breeze, the light in their room illuminating the darken pane.

Their reflection shines back, like an artist's beautiful rendition.

Jim's skin is still flushed, his mouth open, soft and round, his sweat still cooling on his heated skin and Spock is at his back, chin resting on Jim's trembling shoulder.

"Mine." Spock says, leaning away, pulling out and flipping Jim over, because this is what Jim wants.

Jim feels the muscles of his back jump and he pulls in a quick breath when Spock pushes back in, slow and easy.

The movements are gentle, the pace easy and Jim raises his legs, wrapping them around slender hips.

He wishes he had his lover's stamina, wishes they could stay like this forever.

Sometime later, when Spock is moaning and trembling above him, filling him up, Jim pulls him closer with his shaking legs, peppering kisses to his lover’s nose, his brow, and one perfectly pointed ear.

He lets his legs drop to the bed once Spock leans away and pulls gently out.

His lover settles himself on the bed next to Jim.

They share a few sleepy caresses and a kiss or two

"Ashayam.” Jim repeats, as he drifts off, because he is staking a claim too.