"That's the last of the vases, madam." The maid bobbed a curtsey. "Shall I have the footmen begin re-hanging the paintings?"

"No." The mistress of the house turned from the window, and its view of the crowd already gathering in the square. "No, Mary, have them simply set to one side; we cannot know if the tremors will come again."

"Of course, madam." Mary bobbed again and hurried out. Arabella sighed and turned her gaze back to the window.

"We cannot know," she murmured, "but you surely would. Come home, Jonathan - I need you."

As soon as they were alone, Constance turned to her daughter. "Okay," she said, "I'm 90% sure Mrs. Strange is a canon character, so we need to keep uncanon information to ourselves as far as possible. No mention of time travel, no discussion of the PPC, definitely no mentioning elves-"

Constance blinked. "You've had some canon protection training with the Sprouts, right? We don't want to damage the canon."

"No," Jasmine agreed. "That might draw the attention of the PPC, and the last thing we want is your old colleagues to show up with their fancy portal generators. Valar forbid."

Constance raised a finger in protest, then lowered it. "Fair point," she allowed. "But we still don't want to overwhelm the poor woman. She's from the 18th or 19th century; we're from the 21st." She shook her head as Jasmine's forehead wrinkled. "World One centuries, I mean. There's a lot of potential for culture shock."

Jasmine glanced down at her sleeveless top, then across at her mother's tattered jeans. "Mom, I think we might be a walking culture shock."

"Again, fair." Constance turned to the bowl of warm water Arabella's maid had poured and began to scrub her hands. "But just… just be careful, is what I'm saying."

"Sure." Jasmine stepped up beside her, something mischievous in her eye. "Of course, if you really want to attract the PPC's attention, you know what you need to do."

Constance frowned. "Set something on fire?"

"Sure, Dad." Jasmine rolled her eyes. "No, you need to seduce a canon character."

"Jasmine!" Constance gaped at her. "You're far too young to say things like that!"

Jasmine arched an eyebrow, looking very Elvish for a moment. "And how many people had you killed by your twelfth birthday?"

"That's-" Constance narrowed her eyes. "Okay, firstly, that's different, and secondly, I didn't even join the PPC until I was 13."

"And thirdly?" asked Jasmine with a grin. "There's always a thirdly."

Constance pursed her lips. "And thirdly, Suvians aren't people," she said. "So we'll have no more of that kind of talk, understood?"

"I think the costume drama is affecting your speech," Jasmine muttered. She pulled her hands from the water and shook them off. "Did Mrs Strange say something about food?"

Constance took a cloth and dried her own hands more sedately. "She did, and I'm hungry too." She held the towel out to her daughter. "So as soon as you dry off properly..."

Arabella Strange listened to their story with remarkable aplomb. "I confess," she said, sipping tea from a fine china cup, "I find it something of a relief to learn that the great towers looming over St. James' come from so near a place as the future, and not… elsewhere." Her face darkened. "Though it distresses me to know that this London of ours will someday fall into such ruin as you have reported. That Buckingham-palace itself should be brought low…" She shivered, tugging her shawl closer about her shoulders.

"I'm not sure it will," Constance said, avoiding for the moment mentioning her near-certainty that Arabella's London was fictional. "The future is… there are many paths it could take, and the ruins are only one."

Arabella nodded slowly. "And as for the future, so too the past," she said. "Mary has heard that in St. Giles, to the east, the people have sunk into depravity - far worse than even the deepest squalour of the last century. It is almost as though the engravings of Hogarth had become flesh and blood."

Constance coughed, and shot a quick look at Jasmine. "It certainly sounds as though different times," she substituted at the last second for 'worlds', "are mixing together. I wonder how widespread the effect is."

"From what Mary has gathered," Arabella said, "it has taken all but Soho, Mayfair, and Mary-le-bone. To the south, as you know, all is ruins; to the west, a vast forest has arisen. To the east is St. Giles, and Bloomsbury where strange machines are said to line the streets." She frowned. "Northward there seems to be some disagreement; one hears of Camden clad in glass but deserted, of Baker Street guarded by unseen arms, and of strange creatures out of folk-tales and legends."

"What, like fairies?" Jasmine asked. She caught her mother's glare and shrugged. "What?"

"Don't be sassy," Constance said. "You're a guest in this house."

"Upon which point." Arabella looked out of the window at the green square beyond. "The day is drawing towards its close, and it so happens that I have an empty guest bedroom. I simply must insist that you stay here tonight."

Constance opened her mouth to protest, but one look at Jasmine showed that she had resumed her over-dramatic drooping. "Well… thank you," she said. "That would be very much appreciated."

"Think nothing of it." Arabella glanced past them, and the maid who had been lurking in the doorway hurried off. "It is the very least I can do in these troubled times."

They were woken by a male voice, raised in what seemed more frustration than anger: "Dash it all, Mrs. Strange, I need Merlin!"

Constance exchanged a wide-eyed look with Jasmine, then scrambled out of the narrow bed and pressed her ear to the door. She heard Arabella reply, her voice too muffled to make out, and then, as Jasmine caught up with her, the man again.

"What good is a magician if at the moment he is most needed, he can't be found? With Lord Liverpool and the Prince Regent missing, Sir Walter and I can step up to the governance of the realm; but there is none but Jonathan Strange who can be England's magician."

Another soft reply from Arabella, and then a scoff from the male voice. "Norrell. Mr. Norrell's fine house on Hanover-square is sealed up; his servant, what's his name, Childermass, will admit no-one. If we are to rely on Norrell, we may as well open the borders once more and let the rabble and monsters in."

Arabella's voice came again, sounding more urgent. When the man replied, there was an edge of weariness to his tone. "Yes, this morning; my officers have been leading their own servants as if they were crack battalions. Though how much good it will do, if the stories out of Hyde Park are true…" There was a brief, contemplative silence, and then he went on briskly: "I must go - we're converting Derby's house on Grosvenor-square for what little is left of parliament, and if I don't supervise the work who knows what will happen. But you will tell him, Mrs. Strange - when he comes back, you will tell him to come to me right away?"

Arabella murmured her assent, and with an audible swish the visitor strode from the house. Constance exchanged a long look with Jasmine, then went to find her jeans.

When they arrived downstairs, they found Arabella seated in the parlour, breakfast laid out before her, a teacup held contemplatively in her hands. They took their seats without a word, and Jasmine silently buttered a slice of toast.

"That," said Arabella, over the sound of crunching, "was His Grace the Duke of Wellington, as I'm sure you heard. He has declared this," she twirled a finger in the air, "happening to be a grave peril, and has secured the borders of the realm - by which he means, of course, Mayfair, Mary-le-bone, and Soho." She smiled thinly across her cup. "You will forgive me for not mentioning your presence."

"I'd be interested to know whether we're classed as rabble or monsters," Constance said. "What was that about a Mr. Norrell?"

Arabella grimaced. "The other magician in England," she explained. "A very wise and powerful gentleman, I am sure."

"Ah." Constance looked sidelong at her daughter. "Yes, I know the sort."

A smile touched Arabella's lips. "I shall be sure to inform Mary of your approval," she said. "But please - call me Arabella."

"'Okay'." Arabella rolled the word around her mouth. "What a peculiar way you have with language." She sighed. "I suspect we will all have to grow used to peculiar ways if the world does not set itself arright."

"Might-" Constance paused to take a sip of tea. "Might this Mr. Norrell be able to help us? I mean, I'm all for avoiding grumpy wizards, but if anyone might understand what's going on…"

"I do not doubt his ability to help," Arabella agreed. "His willingness is another matter; you may have heard that he has refused to speak even with the Duke of Wellington."

Constance smiled broadly, showing her teeth. "That's the thing about me," she said. "I'm really hard to say no to." 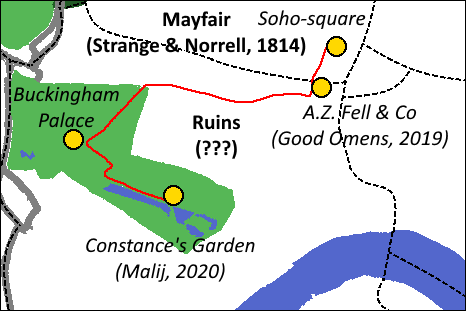 No updates to the map here - Constance and Jasmine got a chance to sit down for a change, so it's the same as last time.

"The World Without Authors" was created by Sergio Turbo and Aelit; "London, Unreal" has been approved as a spinoff by Sergio. "Jonathan Strange & Mr. Norrell" was written by Susanna Clarke. The PPC was created by Jay and Acacia. Constance Sims was created by Kaitlyn. Jasmine is my own.