Watching from the Shadows

Impa prepares to train Princess Zelda as a Sheikah warrior during the year following the fall of Hyrule Castle. Zelda is tired of hiding and eager to fight, so Impa shares stories from the past to demonstrate that there is wisdom in waiting for the right moment to strike. 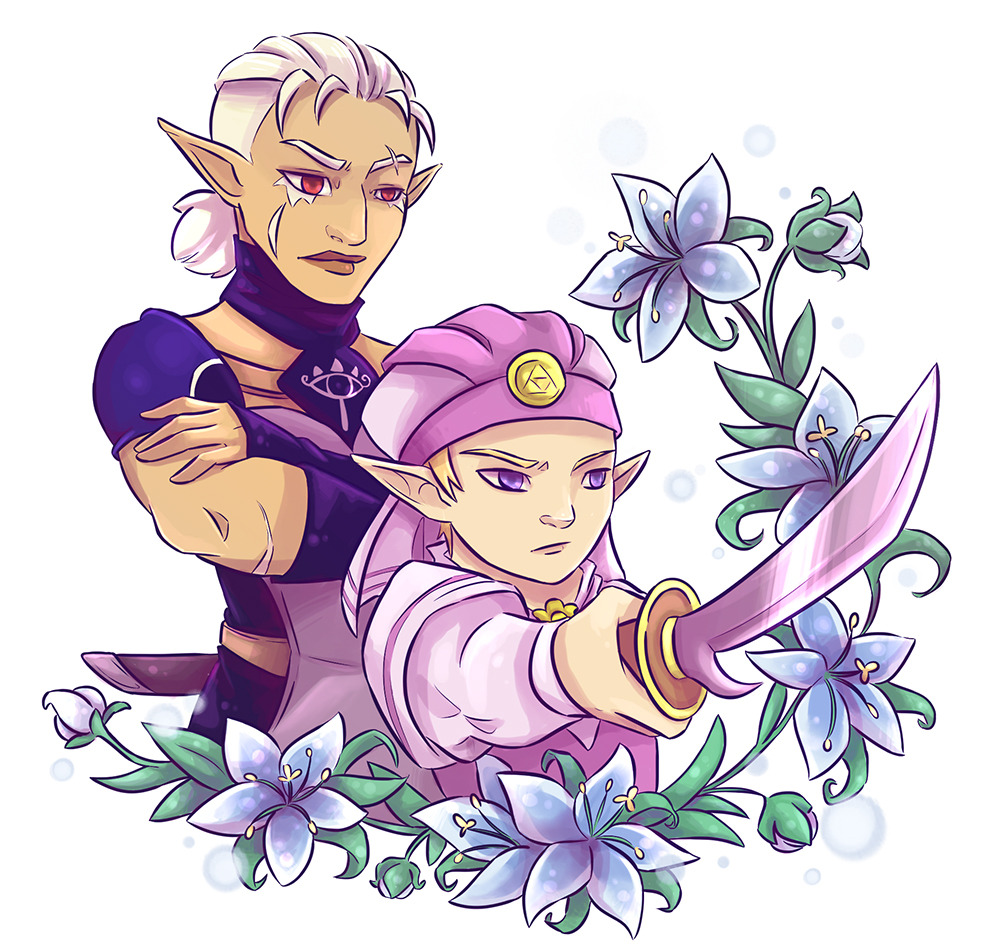 This illustration was created by the magical and marvelously skilled Frankiesbugs, whose sharp and deadly work can be found on Tumblr, on Twitter, and on Instagram.

“I no longer wish to stay hidden,” Zelda announced. Her face was as smooth as a mask, but the hard edge of her tone was unmistakable. “I’m ready to begin training, the sooner the better.”

Impa crossed her arms and regarded the princess with a stern expression. “We’ve discussed this matter already, Your Highness. The time is not yet right.”

Zelda placed her teacup in its earthenware saucer. The girl’s hand did not tremble, but she made no attempt to hide the bitterness in her voice. “Indeed, we’ve discussed the matter, just as we once discussed the emissary from the desert. Just as I discussed my concerns with my late father. I’m afraid that ‘discussion’ may not be one of my talents. It’s time I acquired a more useful set of skills.”

Impa turned away from the princess’s cold eyes to check the locks on her door and windows. She knew everyone in Kakariko Village, from the Sheikah families who’d lived here for generations to the recent wave of Hylian refugees from Castle Town, but she could not discount the possibility of spies in their midst. Times were difficult, and they would only get worse. The desperate would do anything to ensure that they and their families would remain safe.

Impa didn’t want Zelda to see the shadow of doubt that passed over her face. The girl was only ten years old, yet she already spoke like a queen. As much as it pained her to see Zelda grow up far too early, it would benefit no one to treat her as a child.

Impa forced her expression to relax as she faced the princess. “You are not the first Zelda,” she said.

Zelda frowned in response. “Of course not,” she replied. “My grandmother was named Zelda, as was her grandmother before her.”

“That’s not what I mean. You are not the first of your line to see the future in dreams and visions, nor are you the first to hear the whispers of the goddesses that echo through this world.”

Impa prepared herself to continue. Sheikah secrets were not meant for the ears of the uninitiated, and she regretted the necessity of exposing Zelda to these shadows at such a tender age. She would prefer for the girl to enjoy her childhood unburdened by the weight of the past, but the princess would have to learn the history of her kingdom eventually.

“Hyrule is a green and prosperous land,” Impa began, “but it was not always so, and it will not always be.”

“There was a war a few years after I was born,” Zelda interjected. “I know about that.”

“That was a mere prelude to a larger conflict.” Impa shook her head and began again.

“Hyrule was blessed by three golden goddesses at the moment of its creation, and we have enjoyed the fruits of their grace through the ages. Our kingdom has been endowed with gentle rains and fertile soil. The seasons turn, each in its own time, and the people live in harmony with the land. But where there is light, there is sure to be darkness, and there is an abundance of both sunlight and shadow in Hyrule.”

“Then why not banish the shadows, if we have the means?” Zelda asked.

A bitter smile spread across Impa’s face. Just as it was Zelda’s destiny to be born a princess, so was it her own fate to become the leader of the Sheikah clan. Despite their loyal service to the royal family, the Sheikah’s powerful magic and martial prowess placed them in danger of being condemned as shadows fit to be banished. Even now, Kakariko Village was filled with empty houses that stood as reminders of just how quickly the tide of royal favor could turn.

Impa knew better than anyone that a kingdom could not be maintained solely by defeating enemies. In a more peaceful age, the princess would have come to understand this gradually, her wisdom growing alongside her understanding of the bloodshed buried under the placid surface of Hyrule’s history. Unfortunately, Zelda would soon be forced to witness the horrors of war with her own eyes. It was time for her to learn the truth.

“Hyrule is unique among its neighbors, and perhaps unique in all the world, in having been blessed by the goddesses,” Impa continued. “What few know is that this land was also cursed by a powerful god at the climax of an ancient war. Battles were fought to decide whether Hyrule would belong to the children of the sky, who were the chosen of the goddess Hylia, or whether it would become a haven for the children of the earth, the creatures formed from the sand and soil. It is said the Hylians emerged victorious, but no one wins in a war – not in a conflict between mortals, and certainly not in an argument between gods.”

“It is sacrilegious to speak as you do,” Zelda objected. “Do you doubt the will of the goddesses?”

Impa nodded in acknowledgment of Zelda’s concern. She had recounted the legends about the golden goddesses while training the girl to play Hylia’s hymn on a simple flute. Zelda excelled at her lessons, but mere memorization of what she had been taught would no longer suffice.

“You must learn to question these stories and cultivate doubt. You must learn, above all, to be pragmatic. Your duty as the last remaining scion of the royal family is to survive. You must do so by any means necessary, even if that means putting aside your family’s traditions.”

A thin crease appeared between Zelda’s eyebrows. “With respect, Impa, I’m not interested in survival. If staying alive were my only concern, it would be much easier to allow myself to be captured. It would not benefit the usurper king to allow me to die.”

Zelda was correct. In fact, Impa had already entertained the possibility of returning her to Hyrule Castle. The princess would be unharmed, but she would be miserable. Furthermore, if hiding Zelda were Impa’s only goal, she could easily secret her away to the tunnels below the village, where no one would ever find her. Secluding the princess in the tombs of her ancestors would be safer than sheltering her aboveground, but this solution was just as untenable as surrendering her to Ganondorf. Zelda was a child of the sky if ever there was one. She was meant to stand in the light, not crouch in the darkness while waiting for the hero to appear.

“It is said that the first Zelda shared your drive and ambition,” Impa admitted. “When Hylians still lived in the sky, she was the first woman in generations to walk on the surface of the land. She traveled far and wide, overcoming many trials so that she would be able to confront the evil that threatened her people. It was not her fate to wait to be rescued, nor will that fate be yours.”

Impa knelt to retrieve an elegant harp resting on one of the bookshelves lining the wall of her modest house. She could not say whether it was the same harp played by the first Zelda and her chosen knight, but it was old when Impa’s grandmother was young, and its craftsmanship was exquisite. As Impa watched the storm clouds gathering over the Hylian king’s court, she removed the harp from the castle and allowed it to remain unpolished so that it would not stand out among the many Sheikah artifacts she had inherited. Only a master would see its quality or notice that its strings were new and freshly oiled.

“We will begin with this,” Impa said as she pressed the harp into Zelda’s hands.

Zelda frowned. Presumably she had expected something sharper.

“The power of the Sheikah lies in our secrets,” Impa explained. “We have passed our wisdom down through the ages, hiding our magic in song. You will train your strength and reflexes as you learn to wake magic from your harp. When I am satisfied with your playing, we may find other uses for steady wrists and nimble fingers.”

Zelda’s eyes darted to the blade concealed at Impa’s waist. She gave a slight nod to indicate that she understood. “Perhaps you will finally show me where you disappear to at night,” she said. “I have read about the catacombs under the village. It will be quiet in the tunnels, and better suited to the practice of what I must learn.”

Impa smiled at the girl’s cleverness. Though she must be burning with curiosity, Zelda hadn’t plucked even the thinnest string of the harp, and it appeared she had already ascertained the location of the passage hidden in the cowshed. She would be a quick study.

“Lead the way, then,” Impa said. Zelda returned her smile as she rose from the table. Without hesitation, she removed the book that concealed the switch that opened the secret passage. Her eyes sparkled as the lock securing the hinges of the trapdoor released with a soft click.

Like the first Zelda, who ventured into the wild and plumbed the depths of ancient temples, the young princess was as brave as any hero. Impa knew the time would soon come for her to shine.