Wish You Were Here

I am delighted to present a merry little tale of our favourite family of three enjoying an entirely new experience. Well, mostly enjoying, anyway ... 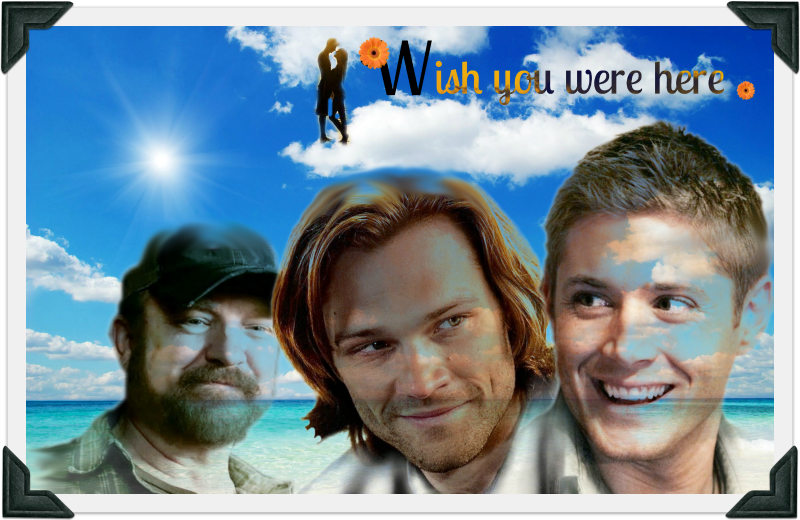 Bobby shifted uncomfortably, stifling a miserable yawn as he settled back into the couch with a groan. He was so bored, he could almost hear his brain liquefying.

It had been over three weeks now, and although he was moving around a little more and things were gradually improving (way too freakin' gradually for his liking) he was still a long way south of normal.

The novelty of his unexpected layoff had worn thin long ago. Putting his back out on that ghoul job last month had really screwed his life big time; not only was he out of the hunt for the foreseeable future, but it meant he was also completely incapable of undertaking his lawful employment as well.

Leaning into car engines or grovelling around underneath them was a complete no-no as far as that sonofabitch L5 vertebrae was concerned.

This enforced rest, as well as being annoying was also goddamned depressing; a stark reminder that Bobby was no longer a young man; nor was he getting any younger.

Bobby wasn't a vain man at all. He was perfectly aware he was no Adonis, but he liked to pride himself on his physical condition. How many guys in their sixties were ox-strong enough to dig a grave and sprightly enough to be able to climb in and out of it to examine it's occupant?

Deep in the back of his mind, a small part of him knew those days of Bobby Singer's working life were about to become increasingly numbered.

He sighed. He'd been desperate to remain of value to someone, anyone; but even his well-meant offer of carrying out research for fellow hunters during his period of inactivity had had to fall by the wayside. Sitting for hours, bending over heavy books? Oh-no. Friggin' bastard pain-in-the-ass – literally – L5 was having none of it.

There were only so many crosswords and sudoku puzzles a man could do before he lost the will to live.

Frickin' crosswords, and extra frickin' sudoku; Bobby had never been much of a numbers man.

Then there was daytime TV.

Bobby looked up from his irritable musings towards the TV set and glimpsed some creepily perma-tanned gameshow host in a blue sequinned jacket sporting a grin so unnaturally white he looked like he'd brushed that morning with weapons-grade Plutonium.

In fact the only bright light in the steaming dunghill that was Bobby's damned achey-breaky, creaking, falling-apart life at the moment was the Winchester brothers.

Whenever they had been physically able to, they had swung by to check on him. "Just 'dropped' by" Dean had breezily stated last time. "Dropped by?" Lexington, Kentucky to Sioux Falls, South Dakota? Only in the Winchesters' crazy, whacked-up world could that be a 'drop by'.

When they weren't physically able to be there, they still made sure Bobby knew he was foremost in their thoughts. A daily phone call, a cheeky email; and then there was the time a weeks' worth of groceries magically turned up on his doorstep courtesy of Sam and his trusty laptop. Ordering groceries from afar: a Winchester insurance policy to make sure Bobby didn't try anything so reckless as going out to the store and doing his own shopping.

Those boys were stifling and smothering him. It was patently clear they didn't trust him in the slightest not to go off and do something stupid that might jeopardise his recovery, and it pissed him off completely.

And he loved them for it.

It was about 4 pm and the late summer sun was beginning it's slow descent toward the horizon when Bobby's phone rang.

Hunched over the kitchen counter, pouring a coffee, Bobby almost missed the call.

These days he had a turning circle like a damned supertanker, and by the time he'd shuffled round to reach the bank of phones along his wall and scanned the handsets to check whether he was supposed to be the FBI, the CIA, the CDC, or just plain old Bobby Singer, wrecked back and all, he was surprised the caller had bothered to stay on the line long enough for him to answer.

He picked up the phone; "yeah?" he snorted gruffly.

"Who's askin'?" he asked wearily, reaching behind him for a chair.

"My name's Leanne," the smiley young voice informed him; "I'm calling from the marketing department of Fender Bender magazine."

"Well, I have some very good news for you Mr Singer," Leanne gushed airily.

Bobby sat in his kitchen listening to his cheerful caller's happy voice imparting her 'very good news'. As the conversation progressed, his face slowly arranged itself into an expression of delighted disbelief.

Eventually he found his tongue; "you're shittin' me?" he stammered.

A thousand miles and a time zone away, the Winchester brothers were just settling themselves into another dull motel room in a dull town after a dull hunt; a bog-standard poltergeist job which required minimal research and even less effort to dispatch a spirit so apparently monolithically stupid it's idea of distracting it's assailants was to throw their bag of salt into it's grave.

Dean was in the shower when the call came, having left Sam in charge of the evening's important tasks of ordering pizza, making the coffee and finding something on the room's archaic TV set that was worth watching; that is to say, something that came under the general headings of sport, gratuitous violence, or hot women and very little clothing.

Seeing who the caller was, Sam picked up with a smile, "hey, how ya doin' Bobb …"

He was cut off by the older man's breathless voice as he lowered himself down onto Dean's bed, his jaw dropping slackly into an astounded gape.