The stories that we tell ourselves...
Written as part of the MFUWSS 2012 Easter Egg story exchange.

(See the end of the work for notes and other works inspired by this one.) 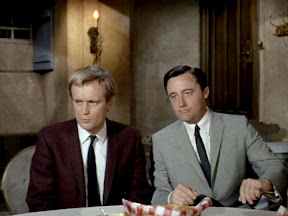 Napoleon wakes with a start, his heart beating too fast. His chest is hollow and he feels untethered, a mixture of guilt and uncertainty and a thing he refuses to name. He knows he's forgotten something important, but for the life of him, he can't think what it is.

He ends up on this Saturday afternoon looking at used books here at the Strand; it's not that he thinks Illya might be here, though he often is. He just happened to be in the neighborhood and now he finds himself with a book in his hands. It's not a first edition, he's pretty sure it's not rare; it's an old book with enough wear at the edges that cardboard shows beneath the woven blue cover. The paper is thick and yellowing, raggedly cut, the type is dark, letters imperfectly aligned.

He leafs through it and the words catch his eye. He knows Russian well now, much better than he did the first time he heard the lines.

Illya had taken the book from the old woman and held it open on his lap, looking down at it while reciting the poem. Napoleon forgot sometimes, just how good an actor Illya was. His supple dark voice was full of emotion now, full of the unbearable longing and the seductive caress of the poet's lines. In just a few stanzas he and the poet had woven their spell.

They'd eaten in the kitchen, where it was warm, and when they finished the soup, Ekaterina who'd been flirting with Napoleon all evening, teasingly accused him of expecting her to fall for thoughtless American flattery. He'd asked her what he should say to a Russian woman instead. It was her grandmother who answered. "Russian women" she'd said looking disapprovingly at him, "like a man with culture. A man who knows poetry." She turned to Illya. "You look like an educated young man, show your friend how it's done." Illya who was speculatively eyeing the kettle looked startled and shook his head. She went into the back room and returned with what was clearly one of her treasures. "This one," she thrust it at Illya. The page was already bookmarked. "Read us this one."

When the echoes of Illya's voice faded, all four people in the room were silent, only Illya's hand was moving, absentmindedly stroking the page into place.

Anna Ivanova's eyes had filled with tears as he read, and now she patted his hand. "You see, I was right, I was. Poetry is the way to a Russian woman's heart. You have won mine syeryenkiy volchok," she sighed dramatically and put her hand to her breast.

Illya lips twitched, his eyes were amused when he looked up. "I am honored, but don't give your heart away too quickly, Anna Ivanova, it's my friend who has all the charm."

"Teach me the poem, Illya," Napoleon said glancing at the pretty girl next to him, "I haven't charmed any Russian ladies yet."

With three demanding teachers, it took a bit longer than it should, but soon enough Napoleon had memorized the first four lines. "One stanza is all you'll ever need," Illya insisted, "and with your accent it's all I can bear to hear."

Napoleon bowed to Ekaterina as he tried them out on her a moment later. She curtsied as she took his hand, and they waltzed around the room to the music of laughter. 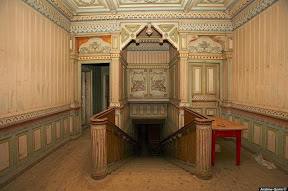 "It's like a house out of a fairy tale," Napoleon was in an expansive mood as they made their way from the warmth of the kitchen through unheated stairwells up to the dormer room. "All these colors, all this wood; stairs filled with shadows; all these closed doors, you can't help but wonder what's behind them."

"Rooms that no one wants to waste good wood heating," Illya said repressively. "It's a dilapidated, cheerless old wreck. If it's a fairy tale, it's a very Russian one."

"With Baba Yaga and her beautiful granddaughter to stand guard."

"I doubt that Baba Yaga cries over poetry," Illya snorted. "Though she was certainly giving you the evil eye. Ekaterina was a little too receptive to your charms."

"Do you think Pavel will actually show up tomorrow?"

"I hope so," Illya sighed. "He's the only one who's actually seen the Thrush base, without him we could be lost in these woods forever."

"That's what I said, like a fairy tale," Napoleon grinned.

"You already knew it, didn't you, you didn't need the book at all," Napoleon later said to Illya as they settled into their cots. Without his glasses, Illya would have needed to hold the book up to his nose to actually read it.

"It's Pushkin's most famous poem. Every Russian knows it." Illya said dismissively. He wrapped his blankets tightly around himself. "It's getting colder again, the weather is turning, I think. When Pavel comes tomorrow we should be able to ski out more easily, not be fighting our way through three feet of slush."

Napoleon pulled his own blankets up to his nose. As romantic as a lump of wet snow, his partner, he thought amused. No wonder it was so easy to forget just what a good actor Illya was.

That was... it startles Napoleon to think how long ago it was. He buys the book and takes it home. It's next to him now as he sits on the sofa, the same spot where Illya sat yesterday.

It's been almost a year since he first talked Illya into his bed. Illya had wanted it too, he was sure of it; but Illya never asked anyone for anything, and so it was Napoleon who did all the talking. Illya had looked at him, and his eyes slowly darkened, and he smiled his small smile. And then there was heat and friction and pleasure and strength meeting strength; the satin of Illya's hair between his fingers, Illya's half swallowed sigh in his ear. And in the morning, when he woke up, Illya had dressed and gone.

It's not something they talk about, there's no need for words; and when it happens again, now and then, it's just heat and pleasure and strength matching strength, hair sliding between his fingers and sighs half heard. And in the morning, Illya is always gone. It is perfect, Napoleon thinks. It was just what he wanted, what they both want. It was perfect.

But tonight he sits in his apartment, his hand absentmindedly stroking a page of an old blue book and as he reads Pushkin's words he hears a soft dark voice full of passion and longing. And he wonders how he could have forgotten just how good an actor Illya has always been.

The picture is the inside of one of a group of abandoned Russian mansions near Chukhloma, and if you want to see more, there are pictures here.