A short prequel to Finding Balance, the Naboo debacle, a Fall, and a path chosen. 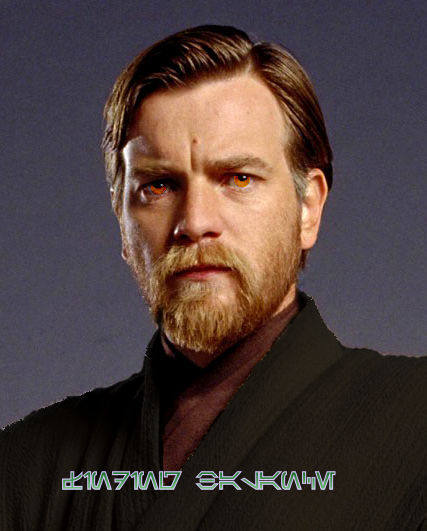 Standing as close as he could to the thrumming red glow of the energy barrier, Obi-Wan tensed to move as soon as it fell, to re-join the battle at his Master, no, he denied silently, his father’s side. He could feel the fork in the path he had travelled for so long approaching, his heart hammering as he watched intently, trying to will Qui-Gon the strength to hold on just a little bit longer.

The badly countered move was so fast, so shocking, that it didn’t register for a heartbeat that his father had been impaled on the red blade of that damn staff.

He screamed his denial, feeling rage, and grief and hate burning through him as he hung on the precipice of that choice for one heartbeat, two, three, as the Zabrak turned to sneer at him while the centre of Obi-Wan’s world crumpled bonelessly to the floor, and then the field finally fell, and Obi-Wan chose his path.

He felt uncertainty from the Zabrak as his eyes blazed amber, and then fear as he allowed the darkness to cradle him, letting his power wash forward ahead of him even as he lit his lightsaber and danced forward, striking hard and fast, but with a precision that increased the fear of his opponent, wrong footed as he was by the sudden switch in the Jedi he had thought would be an even easier kill than the Master who lay on the far side of the melting pit.

The distraction cost him, as Obi-Wan slashed through the handle of the staff, leaving the Zabrak with one functional blade, and one spitting, hissing ruin, which was tossed aside with a low curse. Obi-Wan didn’t give him an instant of respite, flinging out his hand violently, he thrust the Zabrak back with the Force, and heard a satisfying crack as the soon to be dead Apprentice hit the wall of the chamber.

The Zabrak pushed himself away from the wall, attempting to get back into the fight, but Obi-Wan had had more than enough of this, more important matters needed his attention, he channelled lightning into the Zabrak, sending him stumbling back again, and then with one smooth, graceful move, he cleaved him in two, sending the two halves tumbling backwards down the long shaft of the melting pit.

Instantly dismissing any further thought of the vanquished opponent, Obi-Wan spun, skidding to his knees at Qui-Gon’s side.

“Father,” he whispered, easing him into his arms, and feeling the burn of Darkness in his eyes competing with the burn of tears.

Blue eyes drifted open, and a weak hand reached up to touch by his eyes.

“So bright,” he breathed, making Obi-Wan turn his face away, shame beginning to niggle, his father had known that he would one day make a choice, but he knew he had hoped that choice would be otherwise.

“Don’t, no shame…you are…who you are,” Qui-Gon whispered, a weak grip making Obi-Wan turn to face him again.

“You will make…wonderful teacher. Same path, same choices, for Anakin.”

“I can’t, they’ll know, they’ll take one look at me and know I’m not one of them,” Obi-Wan said, unable to stop the tears.

‘Give them too much credit, you’re stronger than you think, you can hide for as long as it takes. Better to hunt the Master from within the Jedi fold, than alone.’ Qui-Gon said into the fraying bond, too weak and breathless to speak aloud any longer.

“Yes,” Obi-Wan whispered, burying his face in his father’s shoulder and letting the tears flow unchecked as he felt the last wisps of life fleeing into the Force.

Obi-Wan knelt in the golden light of the lowering sun, watching Yoda pacing in front of him, trying not to be too obvious about the tension in his shoulders, or the layers of shields that hid his connection to the Dark side of the Force, but if Yoda noticed anything at all, it was obviously being dismissed as upset over the loss of his Master.

“Confer on you, the level of Jedi Knight the Council does. But agree on you taking this boy as your Padawan learner, I do not,” Yoda said, finally breaching the silence.

“Qui-Gon believed in him,” Obi-Wan pointed out implacably.

“The Chosen One the boy may be; nevertheless, grave danger I fear in his training.”

Obi-Wan took a deep breath, letting it go slowly and looking Yoda in the eye.

“Master Yoda, I gave Qui-Gon my word. I will train Anakin. Without the approval of the Council if I must,” he informed the old Master firmly.

“Qui-Gon's defiance I sense in you. Need that, you do not. Agree with you, the council does. Your apprentice, Skywalker will be.”

Obi-Wan slammed down hard on the spark of anger that disapproving statement ignited, forcing himself to simply incline his head in acceptance as he bit his tongue to avoid pointing out that nothing pleased him more than being compared to his father, he wasn’t supposed to know that, after all.

One obstacle down, now all he needed to do was get through the pyre, and deal with a boy who was missing Qui-Gon almost as much as he was, who had expected to have him as his Master, not a newly minted Knight who he was sure hated him and wanted him gone.

Obi-Wan watched silently as the flames consumed his father’s body, still not quite believing he was gone, despite having felt his death. He felt the boy shift beside him, and looked down to find himself faced with wet blue eyes.

“What will happen to me now?” he asked uncertainly, and Obi-Wan could feel he was bracing himself to be brusquely dismissed and packed off on the first available transport to Tatooine.

“The Council has granted me permission to train you. I will do my best to be as good a Master as my Master would have been,” he promised, sighing softly as he felt the new path lock into place with the grudging look of hopeful trust in the boy’s eyes.

He looked back at the flickering flames, he could do this, he would train Anakin to his own choice, and in the meantime he would do everything he could to find the Zabrak’s Master, and he would end that corrupt line of the Sith and avenge his father.