Shigaraki yeets himself to the Past, Regrets listening to Toga

He doesn't care anymore. The never-ending fight between Good and Evil, Heroes and Villains... Nothing ever changes. He stopped caring, probably a while ago, and when a quirk accident sends him flying years into the past, well, now he's just tired. Maybe a bit angry too.

So... I may or may not have forgotten to read the manga or watch the actual show, but I did see Heroes Rising! My sister was watching it and I joined her almost halfway through the movie.
Seeing Shigaraki at the end jump-started my "oh no a new favorite" instincts and here we are with a time-traveling Shigaraki story. I did spoil a bit for myself by looking into his character, but that's okay! My memory is shit and I'll more than likely forget it all by the time I start BNHA.

Chapter 1: Part One, Phase One 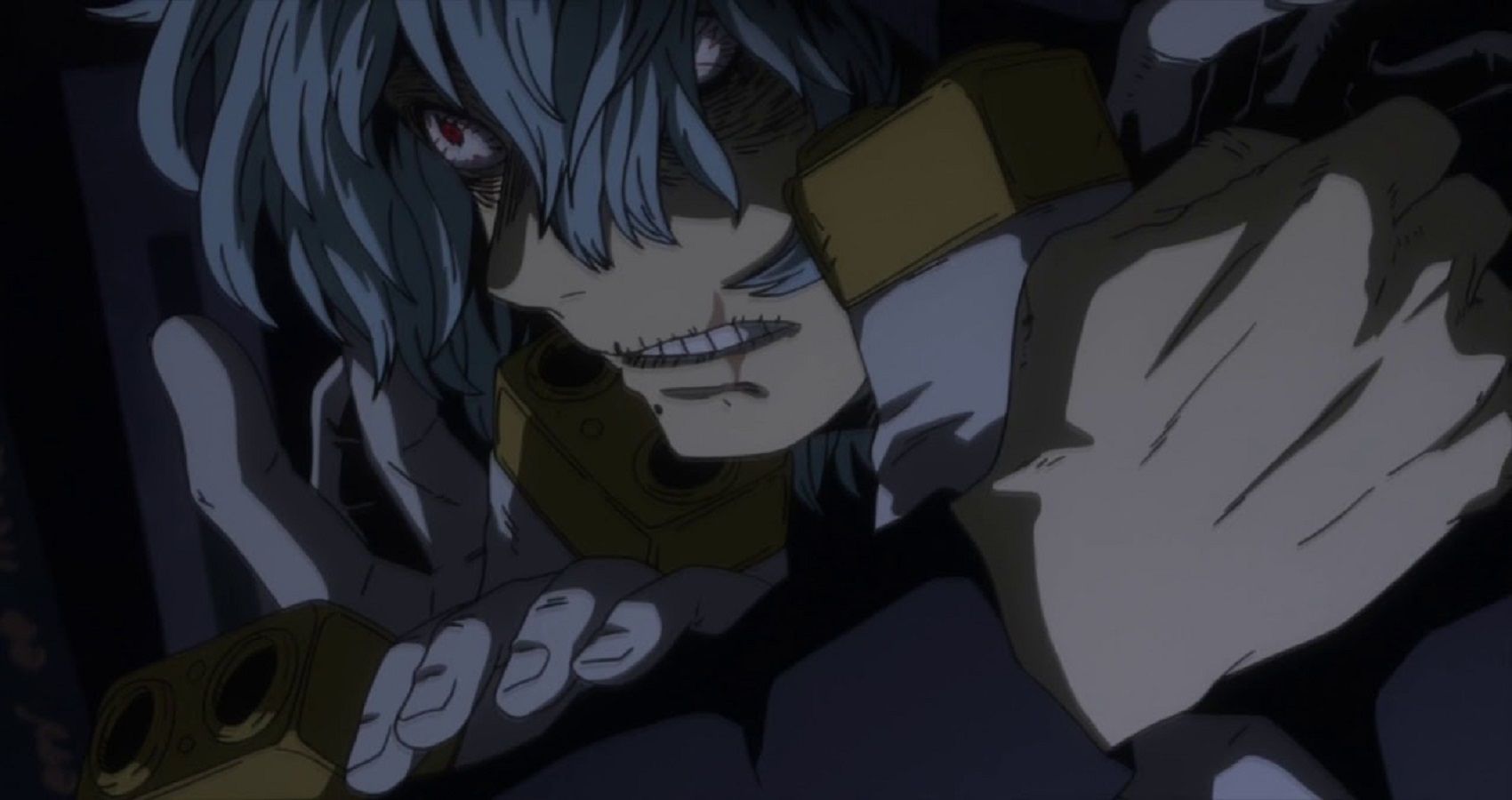 In the beginning, it's pretty hard for him to focus on much of anything.

His head hurts far past the point of being a migraine.

It really doesn't help that when he woke up, no one else from the league was nearby to explain just what the hell is going on.

When he first realized what happened, it was days after waking up, smaller, younger than he should be. After that, it's like he falls into some type of limbo or something like that. Looking back on it, he wants to say that it was him giving himself an adjustment period. Anyone would need one if they suddenly found themselves stuck in the past. But, in reality, he may or may not have dissociated on and off for a while there. Not really anything new for him.

At least it didn't last longer than A few months this time.

Plus, it seems like Sensei didn't notice anything different about him. Then again, the last time he was this age, he had forcefully forgotten his trauma... He's still pretty surprised he hasn't completely lost his mind. He had gone about living with Sensei like some amnesiac fool… he wasn't bitter. He wasn't. He was just a tad… angry about it all. So angry that at times it feels as though he's drowning in it. Because he knows the truth now, he knows that Sensei's been lying to him; he knows that Kurogiri isn't actually Kurogiri but a Nomu of some dead heroics student. He knows who Dabi is, he knows Twices' backstory and how he'll die, he'll know about Toga, Mr. Compress, Hawks, Magne, Spinner… the rest of the league as well, but those were his main— acquaintances? Allies? Friends? What were they to him in the end? Hawks was never truly a part of them, a traitor in their ranks, but something about the hero had drawn Twice, Toga, and even Dabi toward him. He saw the information on the bird that Dabi revealed… Hawks had more in common with them than he thought. Plus, he remembers the look on that stupid bird's face during any interaction they had after Twice's death.

It takes him a bit of time to figure out, without outright asking, that he is currently physically seven years old.

Why the hell did he listen to Toga when she practically begged him to go talk to that stupid-looking teenager for her? The teen wasn't even her usual type.

This means he's been with Sensei for two years now and won't meet Kurogiri for another year or two. He doesn't know what to do… Well, no. That's a lie. He does have a pretty good idea of what he wants and what he needs to do. This is definitely an opportunity that he knows many would kill for. It's early enough that he could keep Kurogiri from becoming a Nomu. Hell, he could even keep him from dying. Only, he's not sure if he wants to do that.

If he does it, who's to say Sensei won't find another Kurogiri to take his place?

Is he really willing to be that selfish? To put Kurogiri through the torment of dying and being experimented on by the Doctor? If he changes things this early on, how likely is it that everything else would change? If everything changes or if just too many things change, his knowledge of the future would become obsolete. He won't be able to protect any of his people. His friends? His family? What was he supposed to call them? His league.

In the end, he decides to wait. Figuring that he'll just need to make it up to Kurogiri someway and save him when he can.

It's midway through the next year that he makes a request of Sensei.

He knows the truth. He knows that initially, he was quirkless and that his quirk wasn't a late development but something that was given to him when that stranger brought him back home years ago… a stranger who was probably Sensei. By this point in time, he already knows that Sensei is able to take and give away quirks, and he's made it obvious how that fascinated him…

He asks Sensei for a healing quirk.

Sensei is quiet at first, and he can tell that he's confused. Then Sensei asks him why and he tells him how he wants to be able to heal himself and future allies whenever it's needed. He tells Sensei how if he's capable of healing all the while destroying he'll become unstoppable.

He tells him how no hero would expect it, and it'll make them drop their guard around him.

By the time he's finished speaking, a tense atmosphere has settled around them, and then Sensei starts laughing. For the first time in his life, he realizes just how unsettling that laugh is.

He's given his new quirk and has to suffer through doing test after test and participating in a few experiments with the Doctor to get the hang of it.

He can easily use his decaying quirk, but it takes more concentration to touch something with all five fingers and use what he labeled as his Ameliorate quirk. It works oddly similar to his Decay. Just a touch with all five fingers, and slowly he'll be able to heal whatever he touches.

The Doctor wants to test the limits of his healing.

He agrees, wanting to speed up the healing process and learn his limitations in a controlled environment.

The tests start off easily enough. He's handed plants, insects, and even a few rats. He heals what he can and learns that while he can heal up the injuries of something that's died, he cannot bring it back to life.

They lose a lot of rats.

Eventually, and he honestly should have expected this, the Doctor has him start working his way up to small animals and then bigger.

It goes from rats to mice to guinea pigs to squirrels to ferrets to young beavers to cats, and then— he puked when the Doctor walks in with a dog. Not just any dog, but a Corgi. He's shaking the whole time, and instead of healing it like he wants to, he ends up decaying the poor dog. He sort of drifts after that. He can't really remember the rest of the tests. At some point, they move on from live animals to healing dead animals and then body parts the Doctor had lying around. He can't remember what happened to start them testing his healing on himself. Still, they start doing that at some point, and the only reason he realizes it is that when he finally brings himself out of whatever funk he fell into, he's acquired quite a bit of scars.

The Dissection scar on his chest terrifies him because he can't remember when or how it happened. Though he should probably be glad about that. It's not like he needs any more trauma on top of everything else. At this point, his hair might turn white because of all the stress.

Time passes by quickly after that, the doctor declares that he has a good enough grasp on his quirk that they could stop the so-called training. He agrees with such relief that the Doctor laughs at him. A week after that, officially four months after he believes the Doctor got his hands on Kurogiri's original body, Sensei leads him to an empty room with just a tiny couch off to the side and tells him to wait there.

He knows what's going to happen next.

It's only because he knows what is going to happen that he doesn't feel as antsy as he did last time around. He doesn't end up scratching his neck or furiously rubbing his eyes, he sits there as still as he can get himself to be while waiting.

Half an hour later, Sensei leads Kurogiri into the room, introducing them to each other and telling him how Kurogiri is now his caretaker.

…He'd forgotten that Kurogiri was essentially programmed to care about him. To look after and raise him since neither Sensei nor the Doctor wanted to do so.

It hurts, and because of that, he avoids asking Kurogiri to do anything for him.

He doesn't want him to think that he's ordering him around.

At least part one of this level was finally completed. Now for part two…