The Legend We Create

The courageous hero loves the wise princess, but they are bound by their fate and must put their feelings aside for the sake of a world floating above the ruins of an ancient kingdom.

…or so the legend goes, but some storytellers have a slightly different interpretation.

This is a tale of the Great Sea and the founders of New Hyrule, and how their descendants transform a grim and silent past into a joyous hope for the future.

This story was included in Fated: A Zelink Zine. You can check out the work of the other contributors on the zine's Twitter account (here).

A Boy on the Sea

The wind was at his back, as was the setting sun. The Great Sea was dangerous at night, but Link had no time to lose. It had already been far too long. Every hour he spent away from Tetra felt like an eternity, and it had been days. Weeks. Perhaps months.

He was too young when he first met her. He hadn’t known what she meant to him until he was forced to leave her behind. He’d wanted to say something, but what? Standing in the shadows cast by old gods and ancient heroes under a sea that shouldn’t exist, the thoughts racing through his mind seemed inane and inappropriate. What was there to say – I’ll miss you? I’ll come back for you? Do you want to leave this horrible place and come with me?

He tried to be brave when he turned his back on her, but he was only pretending. Perhaps some heroes were born with courage, but the strength of will to continue onward was something he had to discover for himself.

He was sent to seek eight pieces of a mystical artifact, but when they fused together they formed a triangle no bigger than the palm of his hand. How could such an insignificant thing be so precious that it caused wars to be fought and kingdoms to burn? If he had a choice, this fading golden glimmer would remain under the sea forever, and the living girl left behind in a haunted underwater would not have remained there for even a single day.

The spirit of the boat was silent, as it so often was. The would-be hero was alone under the vast sea of stars with no companion but the briny wind and the oily creaking of the rigging. As the bore of an ancient and terrible tower slowly rose above the horizon, he considered the wish he would make on the last remnant of the long-buried kingdom – to ride the waves with her under a bright and open sky, all the while knowing that such a wish would never be his to make.

A Girl Cast in Stone


The darkness was never complete. Sharp rays of sunlight pierced the gaps in the warped floorboards of the deck during the day, and the soft glow of lamplight was a gentle comfort at night. There was always light, but it was easier simply to sleep. Tetra had no way of counting the days, and she had no way of knowing how long it had been since she was touched with stone. Weeks. Perhaps months.

She was calibrated for action. She wanted to be the one charting the course, not moldering away below deck or confined in a castle below the ocean. Once she got out of this mess, she promised herself, she would never be forced to remain inactive ever again. She might be young, but she was filled with ambition. Her ancestors once ruled the sunken kingdom below the Great Sea, and there was no reason why she couldn’t establish a kingdom of her own on uncharted soil.

She knew she couldn’t do everything on her own, but she hated not being able to guide her fate with her own hands. Tetra comforted herself with the possibility that this was a trial of her spirit, and that the gods sought to teach her to be patient and rely on the kindness of others. She was strong and capable; she knew that. But perhaps she needed to learn how to ask to be rescued.

No, that wasn’t quite right. She wanted to be rescued by Link and no one else. She loathed being dependent on anyone but herself, but Link was different. He had been all but helpless when he left his island, yet he had changed. He wasn’t a boy anymore. Tetra knew she could rely on him – on his quiet smile, on his hidden strength, on the courage of his kindness. If she could make one wish on the Triforce, evil thing that it was, it would be to go back in time and create an opportunity to tell him how she felt. Such an opportunity had never arisen of its own accord, and now here she was, as still and silent as stone.

Sometimes, while the captain was snoring away at the wheel, Link would venture below deck alone. He would gaze at her with intense eyes, studying the lines of her face and tracing the curls in her hair. Sometimes he touched the tips of his fingers lightly to her outstretched hand. Tetra wondered how he would react if he knew that she could see him, that she could hear every word he didn’t say. She would tell him, surely she would. Someday. When the time was right.

Until that time came, she settled into the dusty shadows of the hull, content to be surrounded by the aroma of brine and machine oil. Beneath her feet, the engine hummed its tuneless song, pushing the craft forward over the endless pitching of the ocean waves.


“So?” Link smiled at Zelda from over the top of the last picture card. “What do you think?”

Zelda tapped her chin with her fingers and tilted her head as she considered her reply. “It’s better than the last version,” she offered.

Link squared the edges of the thick mulberry paper cards as he returned them to their proper order. Niko had been nearly as insistent as Alfonzo that he show the proper respect for his tools. Link rode the rails across New Hyrule as an engineer, just as he had always dreamed, but he had also taken up the craft of storytelling during the long and pleasant evenings he spent in far-away villages. He never realized how much he liked to talk with people until he began his journey with Zelda. She brought out the best in him, gradually helping him to find the courage to speak. He enjoyed his conversations with her, and he loved the sound of her voice, especially when she praised him.

“You think so?” he prompted. “Which parts were better?”

“I like the parallel structure. It shows how the two characters’ thoughts are in tune, even if they haven’t yet confessed their feelings for one another.”

“Can you, though?” Zelda grinned. “You’re awfully sensitive for a legendary hero.”

“That’s why I’m going to be the one telling the legends from now on. I’m going to add all sorts of sensitive bits.”

“You might want to add a few inches to your height while you’re at it.”

“I’ll make a note of that. Anything else?”

“I should get a say in this too, seeing as how Tetra is my ancestor.” Zelda raised her chin and straightened her posture, but her smile was playful. “She seems far too passive for the pirate queen who founded New Hyrule, wouldn’t you agree? I don’t think she would be silent like that. If she wanted something, she would have come right out and said so.”

“But that’s the drama, Zelda,” Link explained. “They love each other, but they’re trapped inside their roles in an epic story and can’t admit their feelings. The knight has to pine for the princess. That’s what makes it romantic.”

“Sure, I understand that, but you’re forgetting that they were real people. We traveled together for a good long time, and we communicated with each other just fine. If I loved someone, I would never keep it a secret.”

Zelda laughed and batted Link away as he leaned in to kiss her. “Don’t be ridiculous. Of course I love you. That’s exactly how the story should end. What’s the point of the hero and the princess going on a grand adventure if they don’t have a happy ending?”

Zelda was right, as she so often was, but Link couldn’t help object to the idea of a “happy ending.” Their role in the legend may have ended, but their story was just beginning. 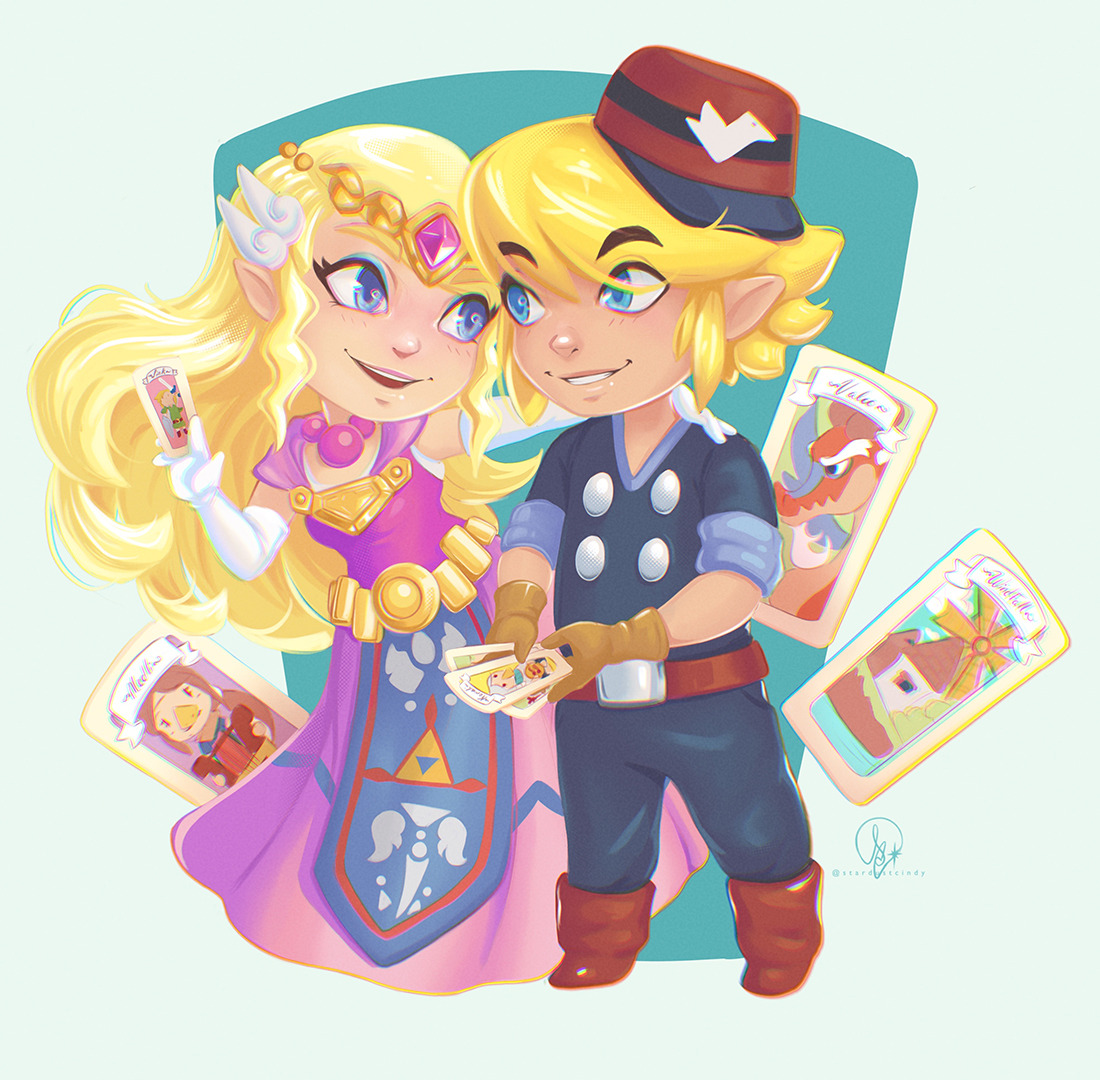 This illustration was created by the luminous StardustCindy. You can check out more of her beautiful work on Instagram!