The History of Dressing Room Two

Eggsy goes back to the 1980's to deliver something to the Kingsmen and ends up defiling room two.

AKA Eggsy is the reason why there is a rule about popping one's cherry in dressing room two. 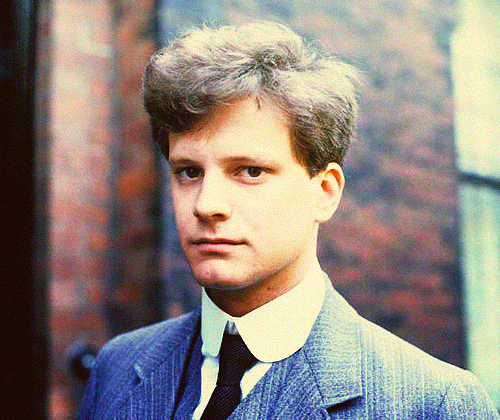 Eggsy breathed slowly, taking in the air from the re-breather tube Nimueh had shoved in his hands moments before.

She pressed the blue thing into his hand and said, “You’re going to need this.”

She shrugged. “You’re going to go into shock the moment you make it to the other side. This might help adjust your body.”

He was pretty sure that meant that they had some sedative in the tube and he was breathing that and period relevant air, but what did he know? He wasn’t the one with a brother in MI6 and six science degrees.

Once his breathing returned to normal, he leaned against a brick wall. Okay, so it was at some point in the 80’s and he just had to pop on by and deliver a message to a ranking officer in Kingsman. No big deal. He could totally do that. Totally.

He placed his hat on his head and made his way down the street.

God, it was like stepping back into one of those old films his mum loved watching when he was a kid and all they had was that ugly VHS player that didn’t work half the time and skipped scenes the rest. Eventually he made his way to Kingsman, careful not to get his suit covered in dirt and his little passage pin stolen.

God, had they really just used passage pins back in the day? Eggsy knew for a fact that the biometric scanners they used now were a fairly recent implementation, even if Nimueh complained about how her brother got that technology years ago and she had been begging for that funding for half a decade, but he had hoped for something better than a damned pin key inserted into a lock.

He entered Kingsman without a single side glance. Dark blue suit with the proper lapel, of course not.

He did, however, bump into a young upstart, who looked almost confused at the general idea of being there. In his hand was a pin key, similar to Eggsy’s, but marked with a different stone. As far as Eggsy was aware, his was registered to Lancelot, hence the blue gem in it. Whoever this fellow was, he was a Kingsman agent, just one of the thirty so of them.

Eggsy grinned, brushing off his suit and that of his unlucky partner. "'ello, luv. First day as a Kingsman?"

The young man, only a little older than Eggsy, flushed and nodded. "Yeah."

God, that was a good look on him. Fucking hot really.

The man turned to look around the shop again and Eggsy had to stop himself from whistling. Damn. Hot damn. Bless that ass. Bless.

Instead, Eggsy checked his key. This was going to lead to… the main offices. Probably where this fellow was going too. "Well, come on. Dressing Room 2. What's your name?"

The fluffy-haired sex bomb muttered under his breath.

Ugh, was everyone in this period so quiet? Not that he didn’t like the silent type in bed. He just really disliked this silence. Eggsy had expected some sound from the shop, soft music playing, something to keep their receptionist from looking like she wanted to claw her eyes out. But, no, only silence and he had to wonder who enforced that sort of malarkey. It was disconcerting. So disconcerting.

Eggsy motioned for him to speak again, tugging the curtain closed behind them. The man hesitated.

The man’s brows narrowed and the harsher, posher accent bled through. "Hart. Gotta problem with that?"

Harry. Harry Hart. Harry fucking Hart. Alive and well in the past and fucking scrappy as fuck. Oh god, he was just like Eggsy. Oh, my god, he was just like Eggsy but with a posher accent. That was something Eggsy never wanted to think about. Never. Especially not when faced with a wet behind the ears puppy of an agent who had probably just recently shot a Mr. Pickles.

God, this was the Harry who named a goddamned dog Mr. Pickles.

The man raised a brow, a little edge in his voice and puff in his chest. "Who?"

Eggsy smiled at him. Oh god, this Harry. He was so precious. So pure. A cinnamon roll. He wanted to lick icing off that cinnamon roll, especially when the cinnamon roll was older and was more of a slightly annoyed Bundt cake. Fuck it.

Harry smirked, eyes looking him up and down, pupils dilated and breathing a little heavy. "From the look on your face, I'd say more than friend."

Eggsy turned away and pressed the key into the lock. "I guess he was."

Harry stared blankly at his back, before setting a hand on his shoulder as they went down.

He told himself he wouldn’t. He would.

Harry pressed him up against the wall, breathing into his ear. “So good. You’re so good for me.”

Harry pressed a smattering of kisses into is neck. “So good for me. My good boy.”

Eggsy will never admit he popped his cherry in Dressing Room 2. Never.

Harry straightened out his tie. “What’s your name?”

Eggsy breathed, short and sharp. No. Fuck. He fucked up. “Excalibur.”

Harry nodded, stepping out of the room. “I’ll see you then, Excalibur.”

Eggsy, turning away, let the smile slip off his face as Harry walked out of the store and out of his life one last time. “Yeah. In about thirty years.”

“What kind of name is ‘Eggsy’ anyway?” Roxy picked up his Texas frying pan. “And what the hell is this?”

Eggsy stared at it for a moment. That was a weird thing. Why hadn’t he sold it already? He should have sold it. “It’s a pan in the shape of the second largest state in the United States.”

Roxy put it on the stove and proceeded to melt butter in it. “Why do you have this?”

“Morgan gave it to me. Secret Santa?” He had given Merlin a dog statue, like the one in the James Bond film, except the man started crying about heaven knows what.

Eggsy felt a slight stab of betrayal. “You got Nimueh and Agent Carter gear?”

Roxy’s smirk grew a little wider. “Yep. I’ll give you the replica Sousa badge if you want it.”

“Please. God, that show is so amazing.”

“So, why ‘Eggsy’?” Roxy flipped the pancake into another pan to finish cooking it in the shape of Texas. “It’s not like it came from ‘Gary’.”

Eggsy swallowed. “Oh, uh… My da called me that. He called me his little Excalibur. We were gonna save the world together.”

“My middle name is Galadriel.”

Eggsy spit out his coffee. “Like the Lord of the Rings?”

Roxy nodded and Eggsy laughed. Roxy was the absolute best, especially when she set a plate of chocolate chip banana pancakes on the table between them and fought him for the last slice. The best.

“I mean the Galahad, or should I say now, Arthur.”

Harry turned to Eggsy, a slight grin on his fucking face. “Hello, Eggsy.”

Harry’s eyes narrowed before he sighed and laid back in the bed. “I’ll have you know I never slept with your mother. Also, language. It’s unbecoming of a gentleman.”

Eggsy snorted. “It’s also unbecoming of you to screw an agent in dressing room two your first day on the job.”

If Harry heard, and he had heard, or remembered, and he probably remembered or Eggsy was going to scream because he was a fucking memorable fuck thank you. His ass is so fine, you can bounce quarters off it. Roxy knows. Roxy has tried.

“How did you hear about that?” Innocence did not work on Harry Hart. He could not sound nonchalant at all. At all.

“Yes,” Harry said, staring at his face. “It appears you do, Excalibur.”

“So…” Eggsy glances around the room. “Does the rule still apply?”

Eggsy forgets the key and tells Lee Unwin, who happens to have Galahad’s with him at the time, that his name is Excalibur and he’s here to deliver a message to Arthur. Lee lets him into Arthur’s office.

“So what do you and Arthur do?”

Eggsy grins, thinking about how he has his Arthur safe and sound. “We save the world together.”

I have exams coming up and big news arriving in the next few hours so I am nervous as hell and therefore writing from my bathtub. Sorry it's so short. Also, feel free to comment about anything and everything (including if I need to tag something). I love criticism and meeting people.

I am lionhartwin and himitsutsubasa on tumblr if you wanna chat. Thanks to the Kinksmen who sat with me through this smattering of writing and who are amazing people on the whole.