Y/N and the babies were allowed to go home a few days later. They moved into Tony's forest house until they found a suitable house  for themself. Steve and Bucky lovingly looked after their small family. Rosie loves reading to her sisters, even if the little ones were too young to even keep up with it.
Y / N still had alot of pain, but both of her mates supported her with everything.
A week after she was released, Steve confessed to her that he had to bring the stones back because it would otherwise change the past forever.
She knew that she couldn't say anything against it, because Steve was the only one who could take Thor's hammer, next to Thor of course, but he was just busy helping New Asgard the returning residents to settle in.
Frigga came to her one day after the twins were born. She was happy that she was fine with the girls and Y / N. Y / N was saddened that her bracelet had been lost during the fight, but Frigga told her it had served its purpose. When Y / N didn't get it, Frigga grinned and said that not even Odin had survived the snap unscathed.

The girls were in Pepper's care so Y / N and Bucky could be with Steve when he had to bring the stones back.
Y / N held his hand tightly and didn't want to let go of him, even when she had to.
"Don't do anything stupid until I get back." Steve hugged and kissed Bucky. 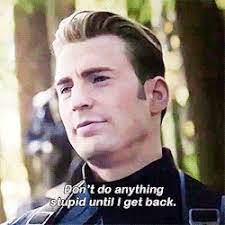 "How can I? You're taking all the stupid with you." Bucky smiled at him. Steve laughed and put Y / N in his arms.
"I love you, Y / N. And I love our family. ”He said and she clung to it.
"Take care," she muttered and kissed him.
Steve smiled at her and stepped into the circle, waiting for Bruce's signal.

Bucky pulled Y / N into his arms.
"What if something happens to him?" She asked quietly, but Bucky didn't answer.
And then Steve was gone. Every muscle tightened in her and she counted the seconds.

Bruce flipped a switch, but nothing happened.
"Stevie?" Panicked, she looked at Bucky.
"Has something happened to him?" She asked panicked. Bucky shook his head. He didn't even know what had happened.
"I dont know. He said he'll be back! "Bucky muttered and he really tried to believe it. But panic rose in him too.
Until a car honked behind them and they both turned around.

Steve got out of the car grinning and Y / N immediately ran to him. She threw herself into his arms, crying.
“You can't do that to me. I was worried about you! I thought something happened to you. "Bucky followed her and also hugged him.
"You're an idiot!" He said angrily.

The car honked again and both looked. The window went down and a grinning redhead looked at her.

"Hey Fellas!" Nat came out of the car and Y / N threw herself into her arms.
"NAT!" Bucky looked at her in disbelief.
"Наталья Алиановна Романов, моя маленькая балерина" he muttered. Natasha grinned broadly at him.
"I thought you were dead. Everyone said you died."

"So. When Steve brought the Soulstone back, he took me with him. I don't know why, but I woke up there and no one could explain why. "
"You had pretty strong arguments." Steve laughed and put an arm around Bucky 's shoulders. Nat laughed and stroked Y / N over her hair.
"Where's my little Rosie and her adorable sisters who weren't named after me?"
"I'm sorry," Y / N muttered guiltily.
"It's all OK. As long as I can become godmother. ”Y / N nodded vigorously.

"YES! YES please! ”Y / N pulled her into the house with her to show her the children.

Bucky and Steve followed them.
As soon as they were in the house, Rosie ran towards Bucky. Her white stuffed bunny in her hand.
"Daddy! Dad! You forgot something! ”She showed them the engagement ring that she had hidden in the rabbit's small pocket.

"Where did you get it from? I thought it was destroyed with the rest of our things. "Bucky asked.
"I took him with me, when you showed me the ring" she admitted and waited for her fathers to get angry with her. But Bucky just hugged her.

"Thanks, Birdie." He took the ring and looked at Steve.
"I don't want to wait any longer," he said seriously and Steve nodded.

Y / N stood in the twins' airy, bright bedroom and looked down at their two babies. Pepper held Maria and Natasha Sarah. She was overjoyed as it was now. Nat looked at her, but then she looked behind Y / n and grinned.
"I think you should turn around, Y / N / N." Y / N turned to see Steve and Bucky kneeling in front of her, beaming at her.

"What?"
“We can not imagine another person at our side.
And now that we've finally found each other again and we can finally spend the rest of our lives with you, we can't wait any longer, that the rest of our lives begin!
Do you want to do us the big honor and become our wife? "Asked Steve and Bucky held out the ring. Y / N looked at her in absolute awe and nodded.
"Yes! Of course I want to be your wife! ”She threw her armes around the neck of her mates and kissed them both.
Rosie grinned broadly and was pleased. Only now Y/N saw that Rosie had filmed the whole proposing with Steve's cell phone.
Bucky slipped the ring onto her finger and then kissed the finger.

"Now everything is really perfect."

Maybe you want to see some more? And then i can write some OS or little stories about them... Only if you want. And maybe you have some scenario what you want to see! please leave a comment!

I wanna thank you all and specally all the wonderful people who kept me posting!
THank you for all the comments and kudos.
And i hope i see you at my other storys in the future.

New Story is online. I hope to see you all again!