As soon as Rosie was in her child seat and Bucky next to her, she fell asleep. Bucky stroked her head several times before looking at Steve.
"She's perfect," Steve whispered and smiled. Bucky could only nod.
They stopped at Wallmart for a moment to buy some things they needed for the child. Bucky stayed in the car with Rosie and let Steve do the shopping. When he was alone he looked at her and tears ran down his cheeks.
“I'm sorry that you've been through so much. But I promise you that you now have a family that you can stay with. Even if ... Y / N loved you very much and even if she is no longer there ... "He leaned over her sleeping body and pressed a kiss on her forehead.

It took Steve a while to get back and when he had put the things in the trunk he looked back at Bucky. He fell asleep and put his hand on Rosie's stomach. 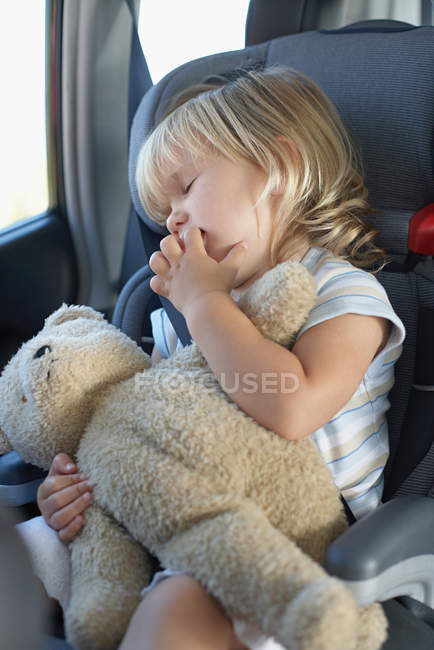 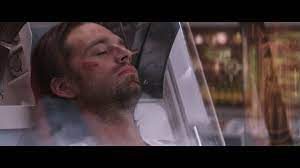 Steve smiled and took out his cell phone to take a picture of both of them before heading back to campus.
It didn't take long before he stopped in the parking lot. He quietly tried to wake Bucky up without frightening or triggering him too much. In spite of this, he jumped up and looked at him.
“All good, Bucks. We're back home. ”Steve said as Bucky stretched. Next to him, Rosie opened her eyes and studied both alphas. Bucky opened the child seat and picked her up.
"Welcome to your new home, little Rosie," he said with a grin as Steve got the groceries out of the trunk.

They entered the house when Natasha went downstairs with Pepper and were surprised when she saw the three of them.
"Who do we have there?" Asked Nat and came closer, looking at the little blond-haired girl in Bucky's arms.
"That's Rosie-We ... we adopted her." Steve smiled and put the shopping down. Natasha grabbed the child from his arms and grinned at her. Pepper looked questioningly at the two.

"Is it the Rosie that Y / N had always talked about?" She asked, stroking the little girl's head.
"Yes. Her mother passed away and the children's home still had our files from the failed adoption of the little ones. We know it was way too fast, but Y / N would have wanted us to take care of them. ”Steve said guiltily. Both women nodded.
“We're going to have a lot of fun, little Rosie. And I'll show you all the cool things that your daddies won't show you because they are too scared for you and will wrap you in cotton wool. "Natasha grinned and both Super Soldiers looked at her in shock, whereupon Pepper and Natasha go off had to laugh.
"She's right." Pepper grinned.
When they heard a third laugh, everyone looked at the little girl on Natasha's arm. She giggled and beamed at Steve and Bucky. "She'll be wrapping everyone around her little finger in no time." Nat grinned.
"Who's going to wrap everyone around their fingers?" Asked a voice from the stairs. Tony Stark's voice.
Steve and Bucky looked at each other briefly and stood in front of Natasha and Rosie. But not fast enough. Tony saw her a long time ago.
"I really didn't think that you and your child could replace her so quickly." He said seriously and stormed down the stairs.
"Tony no." Pepper hissed and tried to hold her arm.
"You didn't deserve Y / N," Tony said seriously, staring at Steve.
“You don't get it, Stark. We'd never be able to replace Y / N or our child with her, "hissed Bucky. “No, you don't understand. It's just a month ... and you're adopting only the best child. "
“Anthony Edward Stark! Now be quiet and listen to them. ”Pepper hissed angrily.

"Okay. I am listening But if you two don't offer me a reasonable explanation, I'm out, ”Tony said. The little one tried to free herself from Nat's arms and she let Rosie down. She ran up to the older Avenger and stopped in front of him, looking at him curiously.
“This is Rosie. She- She's the kid we, Y / N, Bucky and I wanted to adopt, but her mother got her back. I got the call earlier that Rosie's mother had passed away and they asked us if we would take her. Y / N would have wanted it that way. ”Steve said and looked at little Rosie. Tony eyed Steve and Bucky before kneeling in front of the girl and looking at her.
"Hello Rosie ... I know you can't remember Y / N, but she has taken you into her heart. You are one of my last connections to her. And since you belong to her now, you also belong to me. I am your new favorite uncle. Uncle Tony. ”He hugged her and the girl smiled at him.
"Can you say that? Uncle Tony? ”He asked her and went into the living room with her. the remaining four looked at each other perplexed and followed him.
"I didn't expect that now." Natasha said with a grin.
“It's good that we didn't throw things away back then. We have a cot for her and all the other things she needs. ”Pepper said when she saw Tony sitting on the sofa with Rosie.

Bucky leaned against Steve.
"How are we supposed to raise her without Y / N?" He asked his mate.
“We can do it. All together. We are a family. And she would be proud of us. "Smiled Steve.
"We're here for you." Said Nat and smiled at her.
“We should prepare your room and then - I don't know what to do then. I don't know anything about bringing up children and how to handle them. ”Bucky muttered and looked at Steve with tears in his eyes.
“It's okay, Bucky. We do it together and you will know very quickly what you have to do. "Said Pepper with a smile.
"Ey Capsicle, shouldn't she actually speak at that age?" Tony asked from the sofa.
“Maybe she's just shy. I dont know. Every child develops differently. ”Steve saw Rosie slide off the sofa and take Steve's hand.
"Do we want to see where your new room will be?" Asked Bucky and took her other hand. She nodded and smiled at him.

Tony, Pepper, and Nat went to fetch the boxes of children's items while Steve and Bucky took them to their apartment. Rosie ran across the room until she saw the teddy bear on the bed and pulled him close. Steve was about to say something and Bucky shook his head.
"Let her." Rosie pressed her face into the soft fabric of the teddy.

She happily watched as Steve, Tony and Bucky set up the furniture, while Natasha gave them instructions and Pepper sat with her on her lap on the already assembled rocking chair.
Pepper and Nat laughed at how three Avengers failed to put up a cot. It took Tony an hour and almost a nervous breakdown to assemble the bed and the rest of the furniture. Rosie fell asleep on Pepper's lap and after the bed was made, Steve shooed the others out of the room and put them in her bed.
"We're really going to make it, aren't we?" Asked Bucky, wrapping an arm around him.
"Yes, we can do it, Bucks. She will be the happiest child. She deserves it ... our daughter. "Steve said softly and kissed his mate.

First of all:
The little girl on the pic with Scajo is her daughter Rose. i didn´t planed that.
secound of all:
HOW DID WE GET OVER 21000 Hits und 400 Kudos +560 Comments.
YOU are Awesome!

You all deserved some fluff for staying with me so long.
Next chapter will be endgame