Eyebrows and the Scientific Method

A series of vignettes (and helpful lists and terrible illustrations) about Derek's eyebrows, and Stiles's attempts to communicate with them.

Sorry. It turns out I can only do eyebrow fluff.

This could probably be read as a companion piece to Bite Marks and Bendy Straws, since they're both the same in tone and drabble-ness. (That's a word now.)

But it's not a sequel or anything. 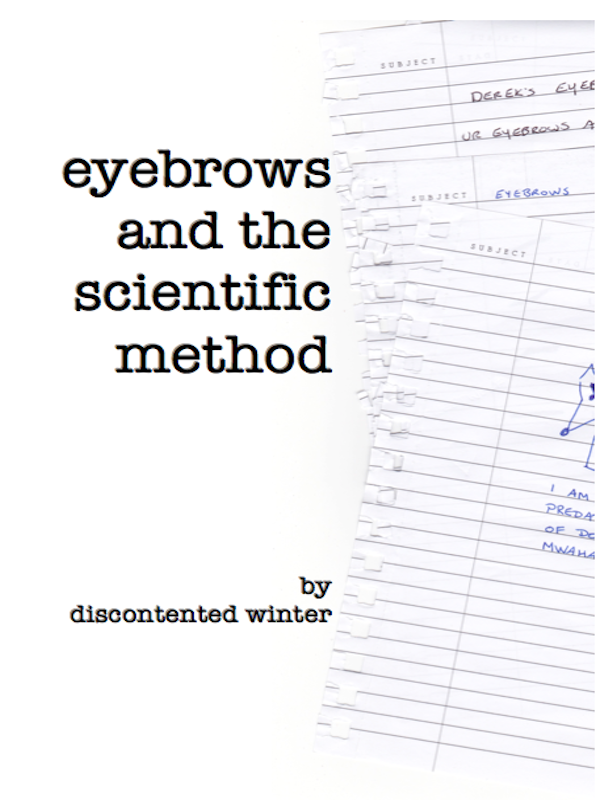 Probably the first thing he notices is his glare. It’s the sort of glare that says “I have a chainsaw behind my back and you’re about to be part of my massacre.” And, okay, the eyebrows really accentuate the whole evil killer vibe that Derek Hale has going on for him, but at the time Stiles is focusing more on:

a. getting Scott’s inhaler back

b. promising not to trespass again

c. wondering if Derek Hale has something to do with the half a dead body the police found in the woods,

d. panicking that he’s not going to make it out of here alive, and

e. all of the above

So it’s not until later, back in the safety of his room, that he’s able to appreciate that Derek Hale is actually hot. Like totally hot. And how strangely menacing but at the same time sexy he is with those cheekbones that could cut diamonds, that mouth twisting into something like a snarl when he spoke, and that powerful stare. But also those eyebrows... well, they’d done all the heavy lifting in that threatening glower, hadn’t they? Eyebrows really shouldn’t be that attractive.

Stiles does not have an eyebrow fetish.

Or a leather jacket fetish.

Or a serial killer fetish.

Or any kind of Derek Hale fetish at all.

A list of things Stiles needs to delete from his browser history:

1. is eyebrow fetish a thing 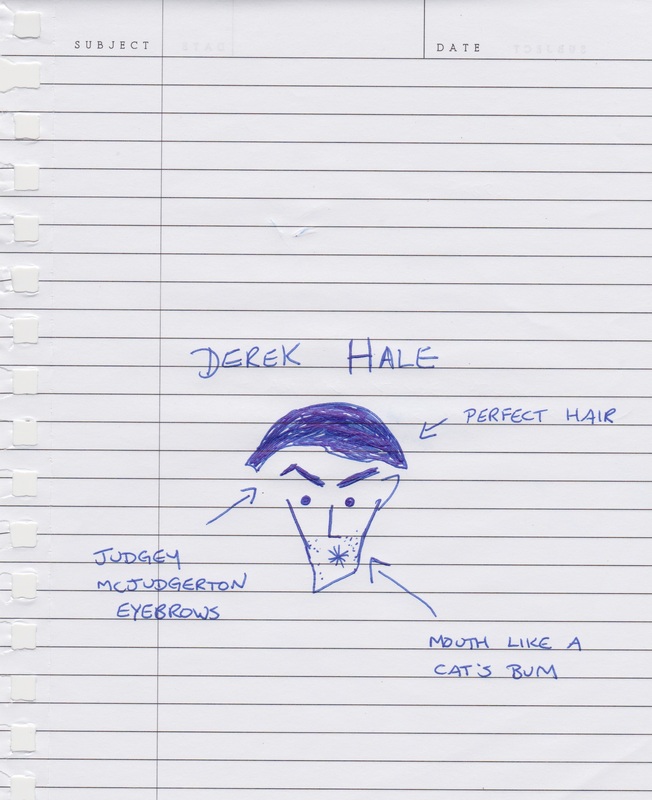 A list of things Stiles learns from the internet:

1. A fetish for hair is called trichophilia. It’s most commonly about head hair though, not eyebrows.

3. Scott is most definitely a werewolf now.

4. Fear of hair is called chaetophobia.

6. Stiles is most definitely bi.

A guy grabs you and demands you cut his arm off with a bone saw… well, it creates a bond, okay? A creepy, horrifying bond that Stiles is sure will cost him thousands of dollars later in therapy bills. If he lives long enough to get therapy, because hey, werewolves are just the tip of the incredibly shitty iceberg that is apparently the level of supernatural what-the-fuckery infesting Beacon Hills.

Then they get weirder.

And throughout it all, Stiles finds himself pushed together a lot with Derek Hale and his blink-and-you-miss-them facial expressions. It takes Stiles a little while to figure out, but once he does, he can’t believe he ever missed it: he’s fascinated by Derek’s eyebrows because they’re the only part of him actually capable of expressing any emotion.

It starts off as a distraction one afternoon, when he should have been doing his homework, but he gets to thinking about Derek’s resting bitch face instead. Because his eyebrows are the key to his resting bitch face. They are the only thing that give even a hint as to what’s going on under the surface. 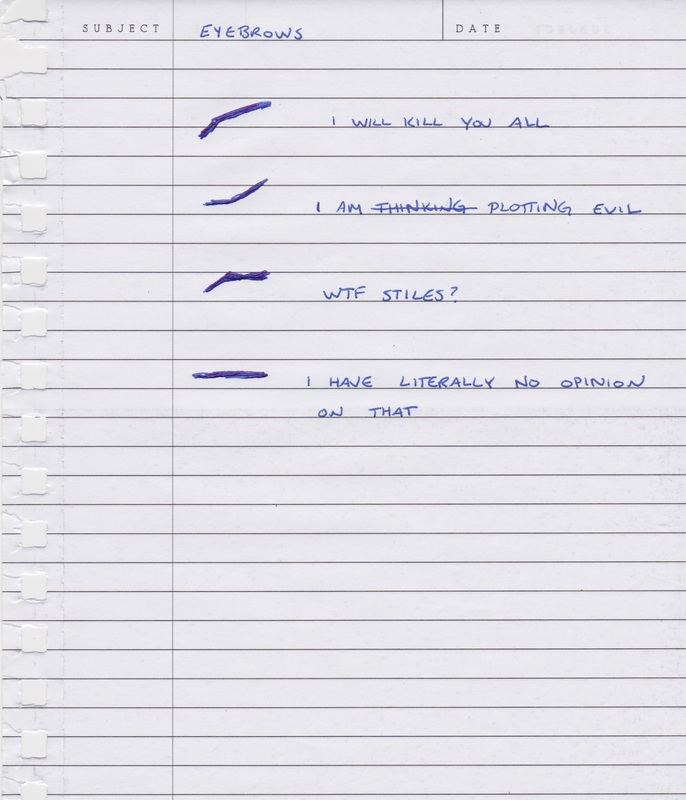 Derek’s eyebrows are complex and mysterious.

Derek’s right eyebrow is a fraction more expressive than the left. Only a fraction, but Stiles is working in nths of degrees here. He notices.

Stiles’s cataloging system is as complex and mysterious as Derek’s eyebrows.

What started off as a couple of doodles in his notebook has turned into an infinitely more intricate system. He has graphs now. He has a method. He has specialized terminology.

“Nothing,” Stiles says, snatching his notebook back, but he’s pretty sure it translates as: I want to bite off the faces of all my enemies and dance in a rain of their blood.  Or possibly: Stop staring at me, Stiles.

There is, Stiles admits, despite his scientific method, still some room for error.

Scott looks at him worriedly. “Is that something to do with our science project?”

“No,” Stiles assures him. “This is like a project I’m doing for myself.”

“What for? Extra credit?”

Because he really wants to pump that A up to an A+.

Stiles loves Scott like a brother, he really does, but he’s not the world’s greatest critical thinker. Which is totally okay, because he’s awesome in a million other ways. He’s generous, and selfless, and he always tries to do the right thing, and Stiles needs someone like Scott in his life more than Scott needs a moral relativist who skirts worryingly close to sociopathy on occasion. If their adolescence turns out to be their comic book origin story, Stiles knows he’s definitely going to be the super villain. Of course he is. Scott already has his superpower, and Stiles has that A in high school science. Stiles is one accident with radioactive materials away from building a weather machine, isn’t he?

He slides his notebook under his bed. Okay, he needs a distraction here, before Scott accidentally stumbles on all his secrets. Because Scott is sometimes scarily perceptive when it comes to emotional stuff. It’s downright spooky.

So Stiles distracts Scott the best way he knows how: “So, how’s Allison?”

Things that are totally the fault of Derek and his eyebrows:

“Stiles!” Derek snaps at him, and Stiles reacts like he always does: by jumping two feet in the air and flailing like someone’s just put a few thousand volts through him.

“Stop staring at me!”

Stiles shuts his notebook. “What?”

Stiles totally has a fearboner. 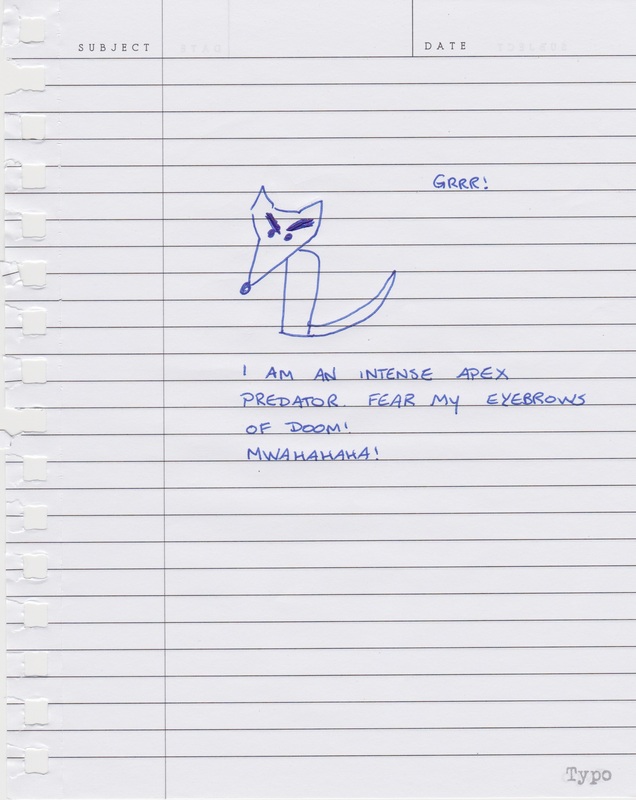 “Omigod!” Stiles shrieks—yes, shrieks like a girl because he was taken by surprise, okay—and then he’s standing in the middle of the woods with his jeans and underwear around his ankles. “Dude! You just fucking pantsed me! Are you twelve?”

Which is unfair, because he might have done the same thing to Scott just last week.

Scott’s laughing so hard he can hardly breathe, and it’s just like old, asthmatic times except this time Stiles doesn’t give a damn if he asphyxiates to death.

“Yeah, yeah,” he mutters, bending down to wrench his pants up. “Oh, Erica? You want a better look?”

She grins and waggles her little finger at him, which rude.

“That had better not be photographic evidence, Isaac!” Stiles complains as Isaac, grinning, slips his phone back into his pocket. “Fuck you guys. Seriously. Fuck you all sideways. Derek, you’re their alpha, make them stop!”

He spins around to find Derek just standing there, staring.

Oh. That’s a left quarter raise with a right half-quirk. Interesting. Stiles flashes him a grin. “Unless you want a piece of this too, sourwolf?”

Left half rise with between a thirty and forty degree downturn. Right upward quirk with spasm.

His mouth says no, but his eyebrows say yes yes yes. 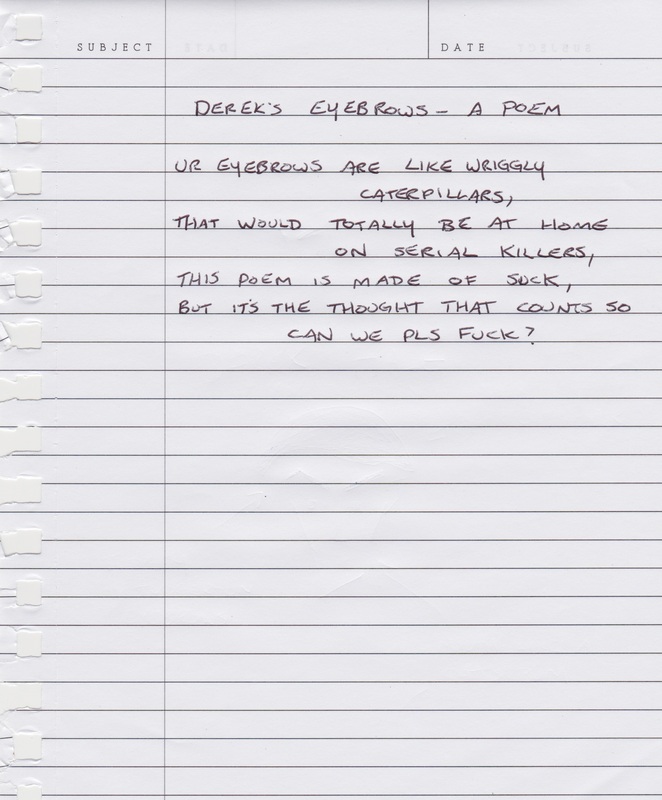 Everything changes the night that Stiles saves Derek from drowning when they’re in the pool and Derek’s paralyzed by kanima venom. By the time Stiles finally makes it home and into his room, he’s wrecked. Totally, utterly wrecked. Maybe in a day or two he’ll be able to remember the feel of Derek’s skin and muscle under his hands, and actually summon up some enthusiasm for it—Derek has had a starring role in all of Stiles’s fantasies for months now—but at the moment he doubts he could even lift his arm, let alone make a fist.

Stiles feels like he’s aged a hundred years in the matter of a few hours, and jerking off is a young man’s game.

All he can think of is the look on Derek’s face when he had to let him go.

It terrifies him, actually.

And Derek hadn’t looked pissed for once. He hadn’t looked like he’d wanted to reach over and rip Stiles’s throat out. He’d looked vulnerable. He’d looked scared, sure, but mostly he’d looked resigned, like of course he knew nobody would bother save him in the end.

It’s probably the most heartbreaking fucking thing Stiles has ever seen.

The hands he can hardly even lift somehow still have the energy to shake.

And, somehow, when his window slides open and Derek climbs through, Stiles knows, for the first time in his life, that there’s no more room for bullshit between them. He sheds it as he stands up. All of it.

“I know.” Stiles reaches out, arms aching, and cups his shaking hands on either side of Derek’s face.

Derek’s eyes widen. “I didn’t even thank you.”

Stiles remembers the way his eyebrows had drawn together—nervous, anxious, fearful—and he’d clamped his mouth shut. Derek Hale doesn’t do vulnerability. At least, he doesn’t intend to, but Stiles has been paying a lot more attention than most people. “Dude…Derek, it’s okay. I get it. Okay? I get it.”

For a moment he’s almost overwhelmed by his own bravery.

Shortly after that he’s totally, utterly overwhelmed by the fact that Derek Hale is crowding him into the wall, dropping down onto his knees, and blowing him. 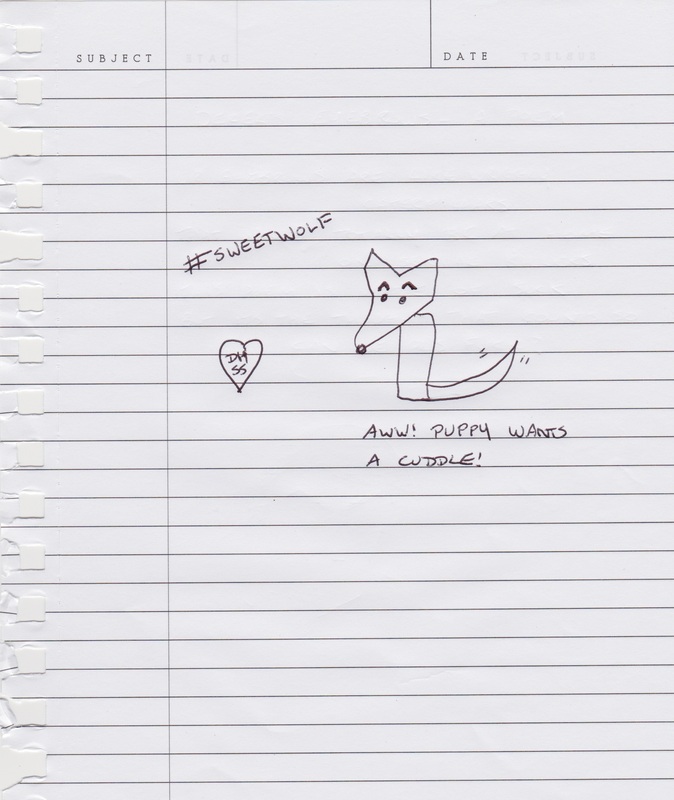 “No, listen. Listen!” Stiles props himself up on his elbow and sticks a finger against Derek’s right eyebrow. “This one’s the talkative one.”

Stiles grins as Derek’s eyebrow arches sarcastically under his finger. “Yes, it’s the one that gives away all your secrets.”

Stiles pushes his finger upward, making Derek look quizzical. “Like the fact that you want me. You want me bad.”

Derek snorts. His mouth twists as he fights a smile. “Is that so?”

Stiles tugs his eyebrow down, giving him half a glower. “Grr. Don’t even try and deny it, sourwolf.”

“Left half quirk with a left downward spike followed by a right half arch,” Stiles says smugly. “Your mouth says shut up, but your eyebrows say, Oh, Stiles, never stop.”

Derek’s laugh, it turns out, gives away all his secrets too.