Years have gone by. On patrol, Ladybug and Chat Noir reminiscence on times long passed. Its a night like any other, except for one thing - Chat Noir has a question for his lady.

I would have posted this a few days ago but I got myself mixed up and thought Night to Remember was this one, lol.

Edit: So for some reason this story posted twice so if you commented on, bookmarked, or kudos'd the other one and are wondering where it went... now you know!

Chat Noir looked out over the city he loved, the city he’d protected for… well, nearly half his life. It had been over a decade since he’d gotten his miraculous and a lot had changed since then, not the least of which was himself.

There had been bitterness and battles. Long years spent constantly fighting against whatever villains and monsters a madman could dream up to send out against them, the weight of an entire city on his shoulders. The sorrows and misunderstandings that inevitably followed whenever he’d had to vanish at a moment’s notice to fight evil.

But it hasn’t all been bad, he thought with a smile as he dug around his pockets. One of those misunderstandings had blossomed into something more, had brought him and the woman he loved together at long last. And while those akuma fights were always rough, they’d always had each other to lean on.

He pulled out a small black box and flipped open the lid. The way even the faint light of the streetlamps at night made it gleam and glitter beautifully always took his breath away. Hopefully it would do the same for her too, but that was something he would find out later in the night. 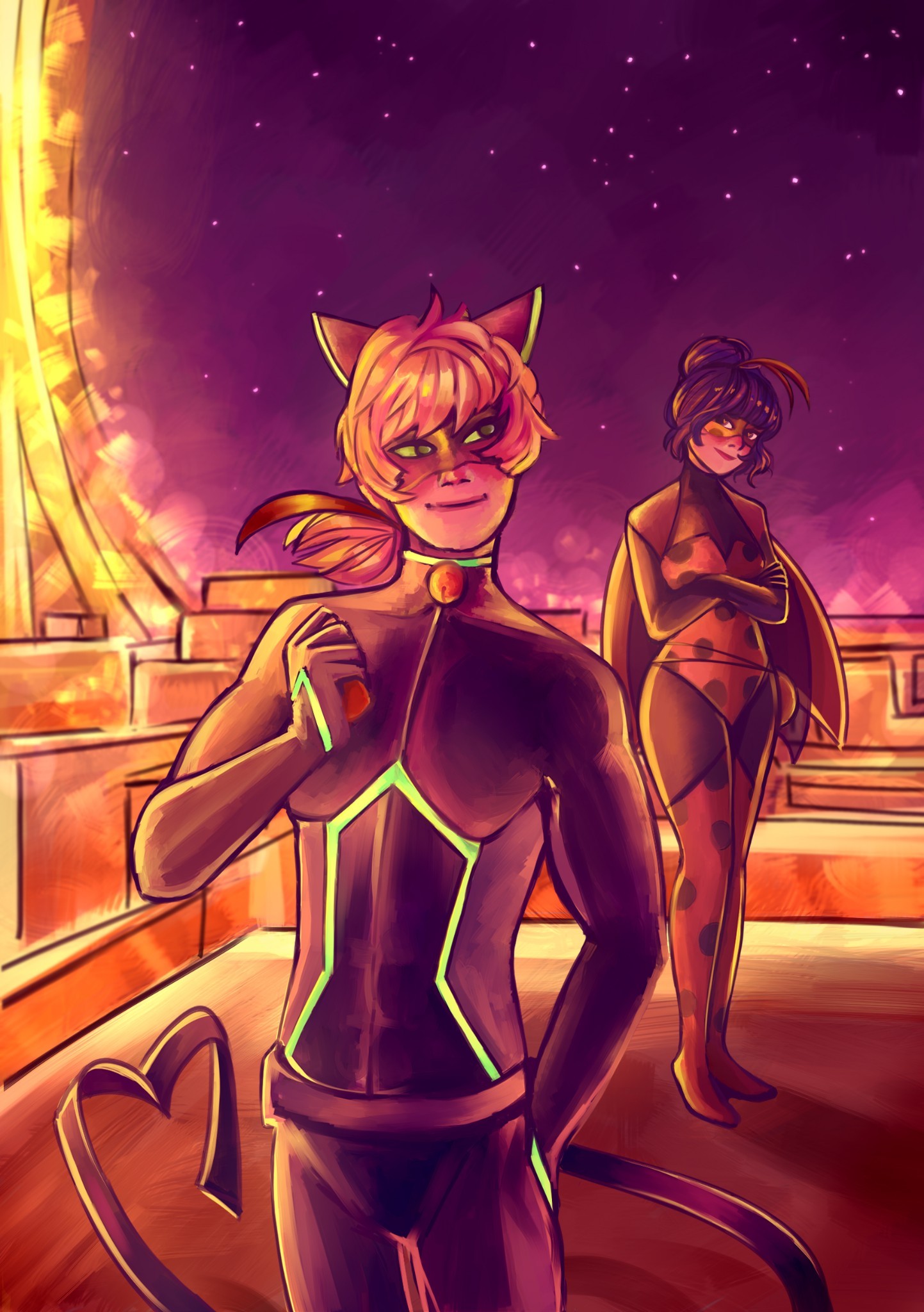 “Hey, mon chaton.” A voice, followed swiftly by the soft sound of feet hitting the roof had him scrambling to put the box back in his pocket. “...What do you have there?”

“A purr-esent for later, my love,” Chat said as he wrapped an arm around her to pull her close.

The years had changed Ladybug as well—the solid red of her suit had given way to large pieces of solid black in places. One of those pieces started at her fingers and ended at her mid-upper arms, looking a lot like the high-society gloves that they wore at charity events. Her thighs were also a solid black, making her usual red suit resemble tall boots. His favorite part was the stylish half-length cape that was modeled after the wings of her namesake.

“Still the same old bad puns, huh?” She gave a playful roll of her eyes and rocked forward on her toes to press a kiss to his lips.

“They aren’t bad if they make you smile.”

“You are, just with your eyes.”

“Whatever you say, Chat,” she smiled, shaking her head. “So what’s the plan for tonight? The usual patrol?”

“Hm…no, I had something special in mind. That is, if you don’t mind me taking the lead just this once?” He bowed as he took her hand.

“Sounds fine by me,” she said with a laugh as he pressed a kiss to the back of her hand.

With her blessing, Chat took off on his baton, a specific destination in mind for this ‘patrol’.

The first stop held the oldest memory. He wasn’t even sure if she’d recognize it. The street was pretty nondescript, just another bunch of buildings in the vastness of Paris.

To his surprise, but secret pleasure, her eyes widened in realization not long after he’d landed on the rooftop.

“Why did you bring me out to the spot where we first met?”

“Oh, is that where we are?” Chat lied through his teeth. “I thought it looked familiar.”

Ladybug smacked him on his shoulder. “I know you even better than you think, chaton. And you’ve told me plenty of times about how ‘the love of your life fell out of the sky and into your arms’, so I know you haven’t forgotten about this spot.”

“Aw, you do listen when I gush about you!”

“It’s hard not to,” Ladybug said with a blush. “But it was so embarrassing! I was so clumsy back then…”

Chat kept a straightface. “‘Was’?”

“Hush, you.” She shot him a glare, but he could see the way she was fighting down a smile. “Anyway, it was nice to stop by, but let’s keep going. We have a patrol to do.”

“Not a lot of reason to patrol these days though, huh?”

“I guess. No more akumas at least, but it pays to keep in shape.” She gently shoved him. “Come on, let’s keep moving.”

“As the lady wishes,” Chat replied with a bow. There was plenty more that he wanted to show her anyway.

The Eiffel Tower had been the site of many, many important moments for them. How many akuma battles had they fought under the shadow of the Parisian monument? He’d lost count of the number of patrols they’d idled away there, talking instead of moving late into the night.

“What have you got up your sleeve, you clever cat?”

Chat looked back at his partner and saw her eyes peering at him curiously. He was glad he didn’t have to keep this secret for long—with her mind on the case, there was no way he’d be able to keep her from finding out any later. His only hope was to keep her distracted.

“We’ve had a lot of memories here, huh?”

After watching him for a moment longer, she turned her attention to the Eiffel Tower. Her gaze softened—he hadn’t forgotten that this was her favorite spot in the city.

“What stands out the most to you?” He took a step closer to her and intertwined their fingers.

She hummed as she considered the question. “Our first date? A nice little café with just the perfect view of the Eiffel Tower.”

“It smelled like orchids and fresh rain, if I remember.”

“It was the perfect, spring day.” Ladybug sighed blissfully. “What about you?”

“That moment when we first ran into Hawkmoth and he had that weird floating butterfly head thing.”

She scrunched up her nose and made a face. “Gross. I remember being super scared that day.”

“Yeah, which makes what happened after so much more powerful.” He wrapped an arm around her waist and pulled her into a half hug. “My amazing baby Ladybug looked at that horrifying thing and decided to stand up to it.”

“And why is that such a powerful memory for you?”

“Because that’s the moment I knew,” he brushed the hair away from her face, “beyond a shadow of doubt,” he leaned closer “...that I had fallen completely and utterly in love with you.” He pressed a kiss to her forehead.

“Flatterer.” She scoffed, but her cheeks were rosy. “Let’s keep going, chaton.”

“Whatever you say, my love,” Chat said, reaching a hand into his pocket to touch the box inside before heading to the last spot.

The last spot he led her to had the most recent memory, although even so it was a few years removed. She had wised up to his game and immediately recognized where they were as they landed among the sweet-smelling flowers of the garden, already closed for the night.

“Isn’t this where we both ran to when we needed to transform?”

“Mhm.” Chat Noir nodded. “Let me tell you, it was something else to watch the woman I love turn into another woman I loved.” He grinned and waggled a finger at her. “Clever lady. Making me fall for you twice.”

“It was a shock for me too, you know.” She began wandering, cradling the flowers so she could breathe in their pleasant scents. “It was terrifying to realize that I’d been seen transforming. And by my crush! How was I supposed to keep a calm head?”

“Oh, I completely understand. Although with me, it felt like two puzzle pieces clicked into place when I found out just who was behind the mask.” He hugged her from behind and buried his nose into the back of her head. She smelled sweeter than any of the flowers there anyway. “Good thing I transformed just a few seconds later, hm?”

She leaned into him and sighed. “You always were good at thinking on your feet.”

“Well, there are a few things that I’ve thought through.”

He pulled away and reached into his pocket.

“Oh, really?” She said with a chuckle. “And what would that—”

Her eyes widened and she cut herself off with a gasp as she turned around to see him on one knee, holding up a brilliant engagement ring.

“I’ve given this a lot of thought,” Chat said with a nervous smile. “Not just the ring, of course, but us. We’ve been through so much and I know that there will be even more challenges for us along the way, but I know…I know that if we’re together, there isn’t anything this world can throw at us that we can’t overcome.”

She listened with rapt attention. Her eyes glistened with unshed tears, glittering even more beautifully than the finest jewels he could have bought. 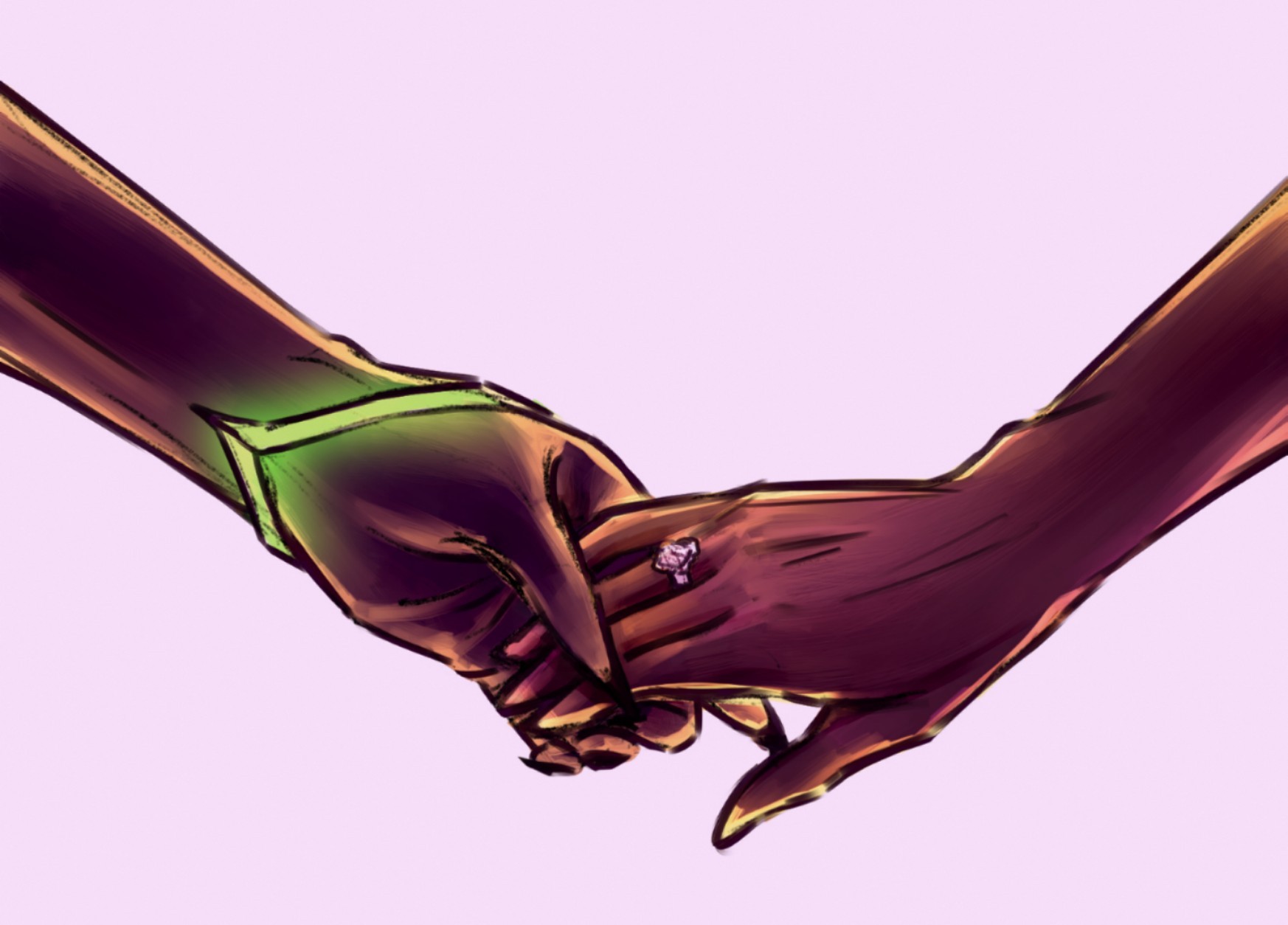 The art is from my good and very talented friend, Leviana! She's on twitter and tumblr, with plenty of great stuff! 🥰💖