What sort of person sells ghosts in the ruins of the gatehouse?
Who catches the ghosts he keeps in his cages?
And why are you asking? 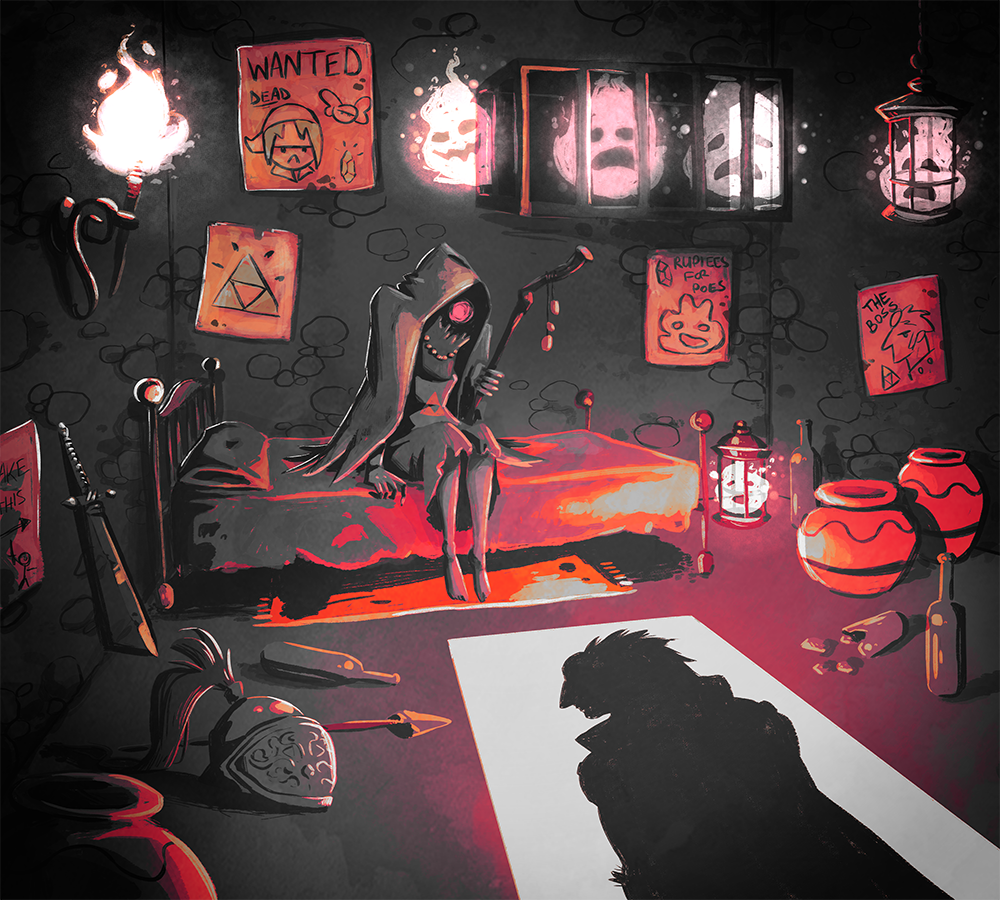 This illustration was created by the darkly brilliant Frankiesbugs, whose spooky art can be found on Instagram (here) and on Tumblr (here).

I haven’t seen your face around here before. Did you come looking for something special? Perhaps I can help you find what you’re searching for. I’ve been keeping company with these ghosts for seven years, after all.

That’s when it happened, I think – seven years ago. The sun still rises and sets like clockwork, and sometimes you can even see it through the clouds. We don’t get much light here. Seven years sounds about right.

I can guess why you’re here. Why don’t you sit for a spell? You can see I have enough bottles to share.

You know, it’s funny. I used to be one of the Castle Town guards. I was the lowest-ranking soldier you can be and still wear the uniform. I joined the king’s army as soon as I came of age. It was right after the war. Before that, I did odd jobs. Making deliveries, chasing down cuccos, that sort of thing. I never stayed in one place for long. I’ve never been good with people. That’s probably why I was stationed in here instead of on the bridge.

I didn’t mind the gatehouse, all things considered. I would have preferred working at the castle, but I couldn’t complain. Things were quiet, and I settled into a routine. I was just starting to wonder if my job would ever get more interesting when it happened. Be careful what you wish for, right?

But here I still am, even after everyone else left. The gatehouse doesn’t look much different than it did when the Castle Town wall still meant something. It’s darker inside than it used to be, but it’s dark outside too. It doesn’t bother me too much, and the darkness is better for the ghosts.

I know what you’re thinking – who would want a ghost in a world like this?

We used to have a thriving market in Castle Town that brought in people from all over the region, but not that many people venture into Hyrule these days. There used to be performances, plays… We even had a mask shop for the kids right on the market square. We don’t get much of that anymore. I suppose you could read, but there aren’t many books left. No one dares go into the southern forest, and paper is easier to burn than trees.

The ghosts are good for the long nights. Some people tell me they look almost human in the light of the campfire. Every once in a while you’ll get a dud, but a lot of the ghosts are surprisingly eloquent once they're released. Most of them don’t know anything about what the world is like now, so they’ll talk about fairs and festivals and fireworks as if they took them for granted. I guess we all did, back then.

It’s the people who bring in ghosts to sell that put me off. I’ve always been awkward, always saying the wrong thing, not knowing how to read a room, but these people… Let’s just say that I’m relieved when they take their rupees and leave.

What’s that? Is there anyone who stands out? Someone different?

Well. Now that you mention it. There’s a boy. A young man, I suppose you’d say, although he couldn’t have been more than ten years old when it happened. So he’s grown up in all of this, but he looks healthy enough. If I looked as good as he does, I’d be in a different sort of business, if you know what I’m saying. But I digress.

He always comes alone, not that that’s anything unusual. Most people who come here come alone. What’s remarkable is that he’s managed to find himself a horse. Can you believe that? In this day and age?

I don’t know how he does it, but he brings in ghosts from across Hyrule Field, always neatly bottled. Now most people, they stay in their village. Safer that way, you know. They might encounter one or two ghosts, if they know how to look for them. Ghosts aren’t common, but they’re not rare, though I hear they have more than their fair share of them in Kakariko…

Oh, you want to know more about the boy?

I’m curious about him too. Where does he get these ghosts, I wonder? He must be exploring some out-of-the-way places, places that aren’t safe. What is he doing, riding around out there on that horse of his? What is he trying to find?

He doesn’t say much, but he seems a hopeful sort. That’s dangerous thinking in these times. That sort of optimism will get you killed, horse or no horse. Men like us understand this. No doubt the ghosts understand it too. Most of them tell stories from before it happened, but more than a few met their end recently, poking their noses into ruins that most people would have the good sense to stay away from.

What’s that? You want to know the last time he sold a ghost to me? I can’t seem to recall. Time is strange these days…

Oh, put that sword away. There’s no need to threaten me. Don’t think I don’t know who you are. I hear the rumors, and I know you’re looking for that boy.

The way the world is now, it’s good for you. It’s good for me too, truth be told. I do all right for myself, me and my ghosts, and my life is comfortable. I’m sure yours is as well, despite everything. Don’t try to deny it. You wouldn’t be hunting that boy otherwise. And that’s a shame, because you’ll never catch him. He’ll catch you, if you’re not lucky. He’ll shoot you down just like he does the rest of the ghosts he catches.

In all these years of darkness, the one thing I’ve learned is that we all become ghosts in the end. You know as well as I do that this state of affairs can’t continue forever. Not everyone spends time in the company of ghosts, and there are still some people who dream of light. 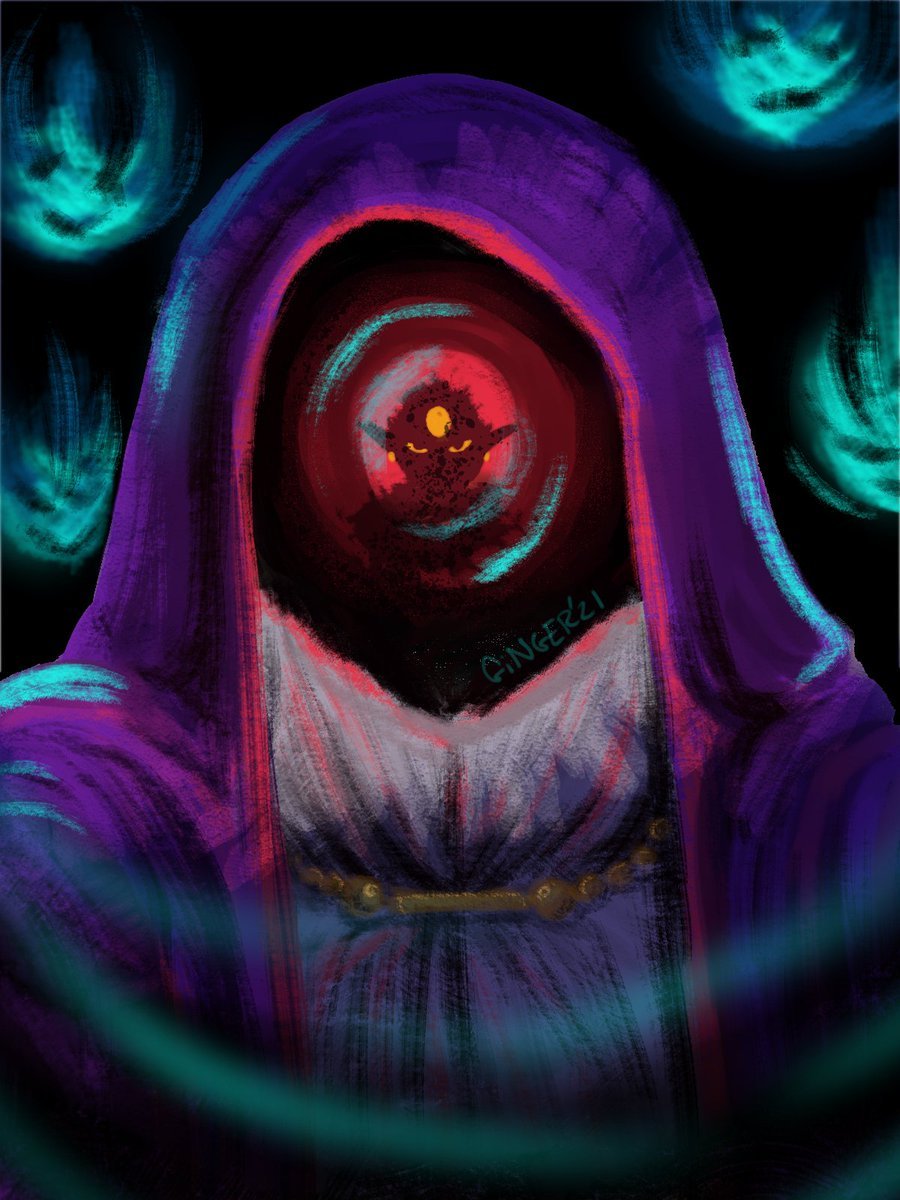 I'm delighted and honored to share this spookyscary illustration from the fiendishly sharp and magical QuinkyDinky on Twitter. They also post stories about monsters and the people who love them as loquaciouslass here on AO3.