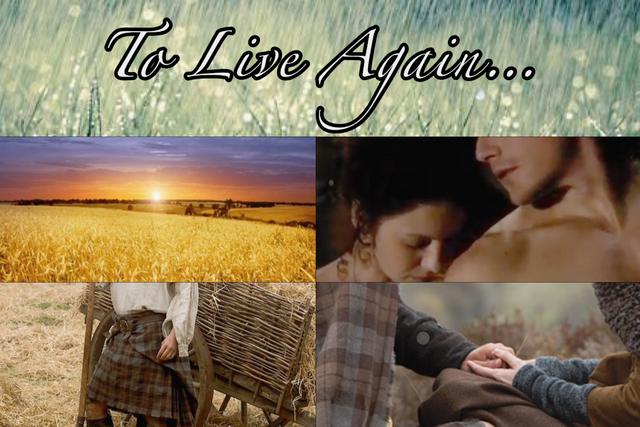 .
Recently escaped from Fort William and still recovering from both the loss of his father and the injuries inflicted by Randall, Jamie finds himself in the employ of a young widow who requires help on her farm. The widow is also, fortunately enough, an exceptional healer, mending far more than his physical wounds.

This is a brief story inspired by the song "That Summer." I haven't been this fiercely passionate about a story in a LONG time. It's literally just Jamie and Claire in the French countryside having the most sensual, passionate, and healing experiences of their lives. That's all. That's the story.

Also, this happens to be a prequel to the Basia Mille Series. You don't need to have read any of the other stories to enjoy this one, but hopefully you'll feel compelled after you do.

I chose not to put major character death in the warnings because no major characters actually die IN this fic, though clearly, grief of off-canvas deaths will clearly be a major factor.

“You, sir, appear quite troubled.”

Jamie didn’t raise his eyes from the parchment; he just kept writing. The noisy inn stunk of travel-worn men and an unkept pigsty. Three fights had broken out since he’d arrived, and the drunken soldiers were singing lewd songs louder and louder with every glass.

Jamie ignored it all, attempting to keep his handwriting legible and his words clear. The letter would do Ian no good if he couldn’t read it.

“You were writing that letter when I came in at lunch, and four hours later, you are still writing it at supper. Would it not be better suited printed and bound as a novel with all those pages?”

Jamie, again, paid no mind. The Frenchman peered at Jamie’s letter with a poor attempt at nonchalance. Jamie looked up at the wee man and gave him his most formidable Scottish grunt.

Unbothered, the man asked, “Are you a soldier? Is that a letter to a lover with promises of marriage upon your return home?”

“If ye wouldna mind, I would prefer to finish my correspondence in peace.”

“You came to a crowded inn for peace?”

Jamie grunted once again. He didn’t come to the inn for peace. He came because he’d be meeting up with a group of Scottish mercenaries who were due to arrive in the next few days. The inn, unfortunately, was over full and lacking private rooms, though the innkeeper was kind enough to provide him with several large pieces of parchment—for a nominal fee—that Jamie was in the process of filling in with tiny script, front and back.

“You must have quite a story, writing so many words. Strange that you speak so little, yet have so much to say.”

“Pardon me, sir!” said Jamie, losing his patience. “I have but a few lines left to write, and if ye would haud yer wheesht, I might just finish before nightfall!”

“By all means,” said the Frenchman jovially, clearly more amused than intimidated.

Just as Jamie was setting quill to parchment to finish off his letter, he was interrupted yet again—this time by an entirely different Frenchman.

“I’ve a letter for you, sir. I was instructed to bring it to you with all due haste.”

Jamie took the parchment, careful to keep it from the wandering eyes of the nosy man next to him. He read through it quickly, the ink on parchment carrying a message he’d never expected to see in his lifetime. His heart leapt into his throat with the first bit of unadulterated joy he’d felt in nearly two years.

But then it dropped as he remembered all the reasons why the words didn’t matter. Nothing had really changed. All was still exactly as it was two years ago.

“What is it?” asked the intrusive Frenchman. “Good news or bad?”

Jamie rubbed his face in his hands, too shocked and overwhelmed to answer. “Pardon me,” he said absently, pushing back from the table. He rose up and headed for the door, bumping into men too drunk to notice that the impact came from a giant redheaded Scot rushing outside.

He went behind the inn in search of some bit of peace to clear his head, though in truth, he didn’t need it. Everything around him was growing distant—the sights, the sounds, the pungent scents of man and beast—as though the letter in his hand had pulled him out of the world as he knew it and placed him back two years before.

He fell to his knees as he gazed out over the unending wheat fields disappearing into the horizon. The sun was half set, sinking lower with every breath, illuminating the crops in a blaze of golden light. The summer wind rolled over the plants’ spikes in waves, giving the illusion of a vast, glimmering sea.

And then he felt her, the warm breeze only a whisper of her touch. The gusts of wind carried the music of her sounds through the rustling leaves.

It was as though no time had passed at all, and his heart was freshly cut out of his chest and flogged relentlessly—a hundred lashes on top of a hundred lashes.

In each fist, he gripped a letter; one was his past, and the other, his future...at least, it would be if he willed it so.

He looked down at the letter to Ian, pages and pages of rambling. It was his truth...his loss...his pain. It was the reason he couldn’t let go of France. It was the reason he joined the mercenaries, risking his life foolishly again and again. He’d told no one before, but two years after it happened, he knew he owed his friend and his sister the truth of why he’d turned into a ghost.

But the letter in his other hand was a gift. A means to tell his story to his family in person...face-to-face...like he feared he never would.

The sky was flooded with color as the clouds clung to the disappearing light—oranges, pinks, purples, and blues. It would be completely dark soon. He’d lie asleep in a crowded room and count the minutes until the sun rose again, because night was when she refused to remain a memory. Night was when she invaded his dreams with her brilliant smiles and soft kisses. Night was when her tears became his own, soaking the pillow where he lay his head. Night was when he woke with stabbing pains in his chest, realizing once again that she was truly gone.

He looked down at the letters and asked himself if he could do it.

Could he face returning home?

Could he confront his failure and all his shame?

Could he accept she was really gone?

Was it worth hoping there was some bit of life worth learning to live again?