Stiles had always been good at speaking Derek's language...

It started in my head as a drabble for Prompt #261 Pocket over at drabble-weekly, but then Derek's viewpoint popped into my head so I extended it. I gave myself 15 minutes to get it out, so what you see is what you get!

Man, this year is a roller-coaster. My mood is all over the place - I bounce between feeling full of enthusiasm and creativity, and wishing I was a cat because that's the level of energy I have! I did get four hours of sleep last night which is amazing for me, so hopefully, today being my writing day I might manage some creativity! 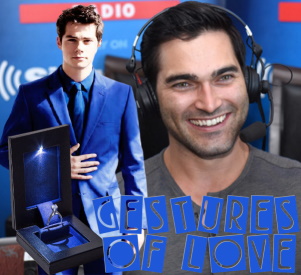 Stiles shuffled nervously from foot to foot, smiling weakly at the enthusiastic thumbs up from Erica behind the reception desk. The walk to the studio had never felt so long, his feet dragged slightly on the rich carpet as he made his way down familiar corridors. The walls were lined with images of the Station’s resident DJs and artists, decades of Hales glaring down at him with dark hair and heavy eyebrows. By the time he reached the recording booth, he had worked up a sweat and his collar felt like it was strangling him. He kept patting his pocket nervously, checking that the box that felt like it weighed a tonne was still there. Each time, he could feel the reassuring yet petrifying shape beneath his hand, reminding him why he was there.

Through the glass, he could see Derek and Oz were well into their podcast, chatting about the latest game the Silent Wolves had played and how well they had performed. Derek’s face was animated as he enthused about his fellow team players and their strengths. He looked up and saw Stiles through the window, a confused smile crossing his face and Stiles felt his nerves disappear.