“What’s the matter, Grandpère?” Germain asked, his eyes bright with excitement. “Are you in need of healing?” Without waiting for an answer he turned to Claire and asked, “What do we need? I will fetch it.”

Germain raised himself to full height - which wasn’t quite as impressive as he no doubt thought - and announced proudly, “I am Grandmère’s app-ren-tice.”

When Marsali is too ill to assist Claire in the surgery, Germain decides to become Grandmère’s newest apprentice and, while neither hurt nor ill, Grandpère is the very first patient he tends to. A fluffy one-shot set during early Season 5. 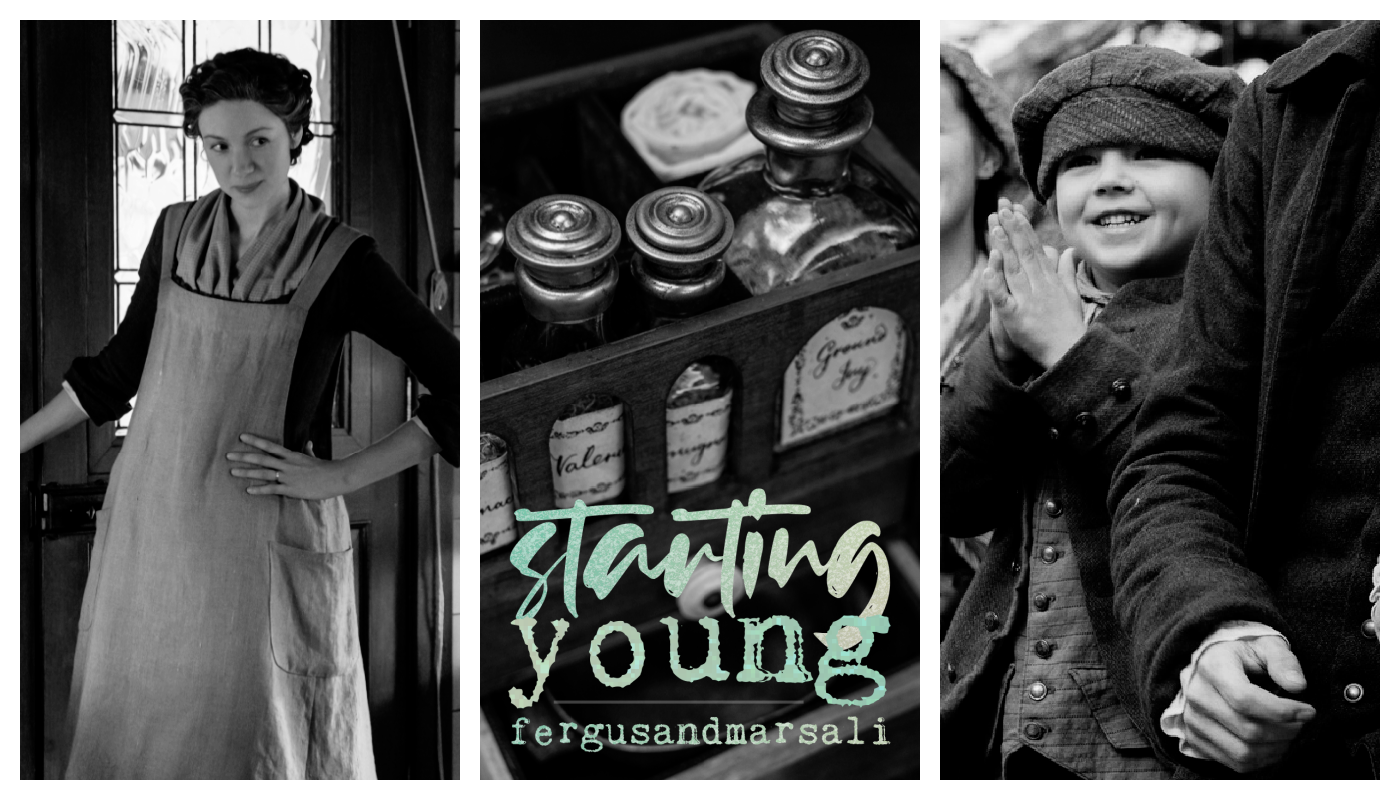 What is this for? Her mind echoed as she moved the specimen under the light slightly to the left. “What is what for?”

Germain’s words finally filtered through the penicillin-induced haze and Claire quickly looked up from her microscope. She spun around to find her eldest grandson sitting on the floor in front of her medicine chest, its contents strewed around him while he looked up at her with bright eyes.

She placed her hand on the bench behind her as she took a deep, calming breath to steady herself, almost afraid that any sudden movement might result in one of the more potent jars upending all over him.

Not to mention the number of recently sharpened tools that lay inside.

She walked across the room with the lightest of steps then crouched down in front of Germain and, cradling her hand around his, guided the bottle high enough for her to read the label.

“ This is echinacea and it’s good for treating the flu, amongst other things.”

Germain nodded seriously before putting it down and grabbing another. “And this?”

“This is valerian which is most useful for helping someone fall asleep. Although it can also be of help in times of stress.” Foreseeing exactly where this line of question was going - and not having the time nor the patience for it - she asked, “Is there something in particular you are looking for?”

Germain tilted his head, tongue poking out between his lips as he considered the bottle in his hand. “Maman cannot sleep at night because of the bairn. Will va-lerry-num help her?”

“Valerian,” Claire repeated clearly, smiling even as she shook her head. “It’s not wise for women to take such medicine while pregnant, although I have no doubt your mother appreciates your concern.”

While Marsali had taken to spending almost every day in the surgery, she had begun to suffer from the occasional migraine as her third pregnancy progressed and it wasn’t unusual for her to stay at home. Fergus had already been by earlier in the morning to let her know it was one of those days when his wife was desperate for some peace and quiet.

“Does your mother know you’re here?”

Germain shrugged one shoulder nonchalantly and Claire had a flashback to Fergus doing the exact same thing when he was nine or ten years old, fresh off the streets of Paris and always more than willing to skirt the truth however slightly. “Maman said for me to find something to do.”

“And you thought to come here?”

“You wouldn’t rather be outside?” Claire asked hopefully. “With your father, perhaps?”

“Non,” Germain shook his head. “Maman says the work she does here is ‘verrae important’. She has said many times now that I am big enough to help with the work.”

Claire very much suspected Marsali had been referring to general household tasks and looking after his little sister but she could see how that wasn’t nearly as exciting as all the things that could be found in the surgery. “Well, I suppose I should put you to work then. Let’s start with putting everything back into the medicine box - gently .”

The rest of the morning progressed quickly enough, Germain having been assigned a number of ‘verrae important’ tasks such as sweeping the floor and sorting (and playing with) items in random cupboards but as lunch time approached it was obvious the boy’s interest was waning without any experiments to perform or patients to tend to.

Just as luck would have it, Jamie - who was no doubt also thinking about having something to eat - walked in the door.

“What’s the matter, Grandpère?” Germain asked, his eyes bright with excitement. “Are you in need of healing?” Without waiting for an answer he turned to Claire and asked, “What do we need? I will fetch it.”

Germain raised himself to full height - which wasn’t quite as impressive as he no doubt thought - and announced proudly, “I am Grandmère’s app-ren-tice.”

“Very willing to learn, I’ve found. Quite eager to help, also,” she added with a straight face.

“Aye. I can see that.” He looked back down at Germain with regret. “Unfortunately, I am neither ill nor hurt. I would have verrae much enjoyed being subjected to your healing, bìodan. I have no doubt it would have been of the finest quality.”

Sensing an impending meltdown - and being in the mood to mess with Jamie just a little bit - Claire stepped in quickly.

“No matter. You’re well overdue for a check-up and now is as good a time as any. Come,” she waved Jamie towards the chair. “Have a seat while Germain and I gather everything we need.”

While not nearly as enthusiastic about the idea as Germain, Jamie acquiesced and endured their ministrations with good grace.

Eyes, ears and even the nose were checked first, utilising a rather generous amount of tools both useful and not so useful, followed by a series of questions related to Jamie's recent state of health. The most exciting part, however, was when they began to test his reflexes.

Handing over the little makeshift rubber hammer to Germain, Claire pointed to a spot below Jamie’s knee where she knew a tendon would be found beneath the dirt-stained fabric. “Tap just here. Gently, mind you.”

Germain did as instructed and Jamie’s leg jerked.

He tapped again and laughed even harder when Jamie let out a rather fierce “Stop that!”

“The other one now,” Claire prompted before their grandson lost it completely. She needn't have bothered though, for apparently the next time was even more hilarious than the last - so much so that both she and Jamie couldn’t help but laugh along with him.

While Germain was still gasping for breath she took the opportunity to relieve him of the hammer and tuck it away, in anticipation of its disappearance sometime in the very near future.

They tried the Hoffman's Reflex next then the Glabellar, which generated significantly less reactions from both the patient and apprentice, before officially declaring Grandpère fit and healthy - that is, until Jamie’s stomach let out a rather loud growl.

“Ah, one last thing left to tend to, I see. Let’s head to the kitchen for lunch, shall we?”

Not having to be asked twice, Germain ran out the door and Jamie took the opportunity to wrap an arm around Claire and pulled her close enough to nuzzle her chest with his nose.

“As enjoyable as that was, Sassenach, I admit I might have found it even more so had it been your ministrations alone.”

She looked down at him, one eyebrow raised. “Is that the true reason you came to visit me, then?”

“Weel,” he admitted. “I intended on sharing food with you, also.”

“Mmmm…” she hummed, distracted by his wandering hands. “I might have tested your cremasteric reflex.”

“Stoke the inside of your thigh," she explained, "causing the cremaster muscle to contract and your testes to elevate.”

Just as expected, he stopped short and she turned away to tidy the last of her things, hiding the smile on her face as she did so. They didn’t have time for anything now but that didn’t mean they couldn’t plan ahead.

“I’ll do it later tonight if you’d like me to." She looked back at him then, wanting nothing more than to see the look on his face when she said, "For your health, of course.”

“Aye,” Jamie agreed seriously as he followed her out the door. “For my health.”

This was supposed to be a sickfic. Then it turned into something fluffy. Then it took a completely wild turn at the end that I had no control over. Honestly - you can’t leave those two alone for even a minute, I swear!