Want to know where your donations are going? Check out our latest budget update and donate today! Thanks to your generosity we've raised US$130,063.33 surpassing our goal of US$40,000 so far!

The Pillar of Cefiro

Jungkook goes on a vacation to France, when he and two of his travel companions are summoned to another world, called Cefiro. There he learns that the person that keeps that world safe by prayer, has been abducted by his two bodyguards. To get back home they must safe Cefiro by becoming the Legendary Magic Knights.

Jungkook, Jimin, and Taehyung are out on a vacation in France when they hear a voice calling out for the magic knights and are transported to another world.
There they meet Namjoon, a sorcerer, who asks for their help. It turns out his world is in danger of being destroyed by various monsters because the prince that keeps their world safe has been abducted by one of his guards.

Chapter 1: The Legendary Magic Knights get summoned to Cefiro 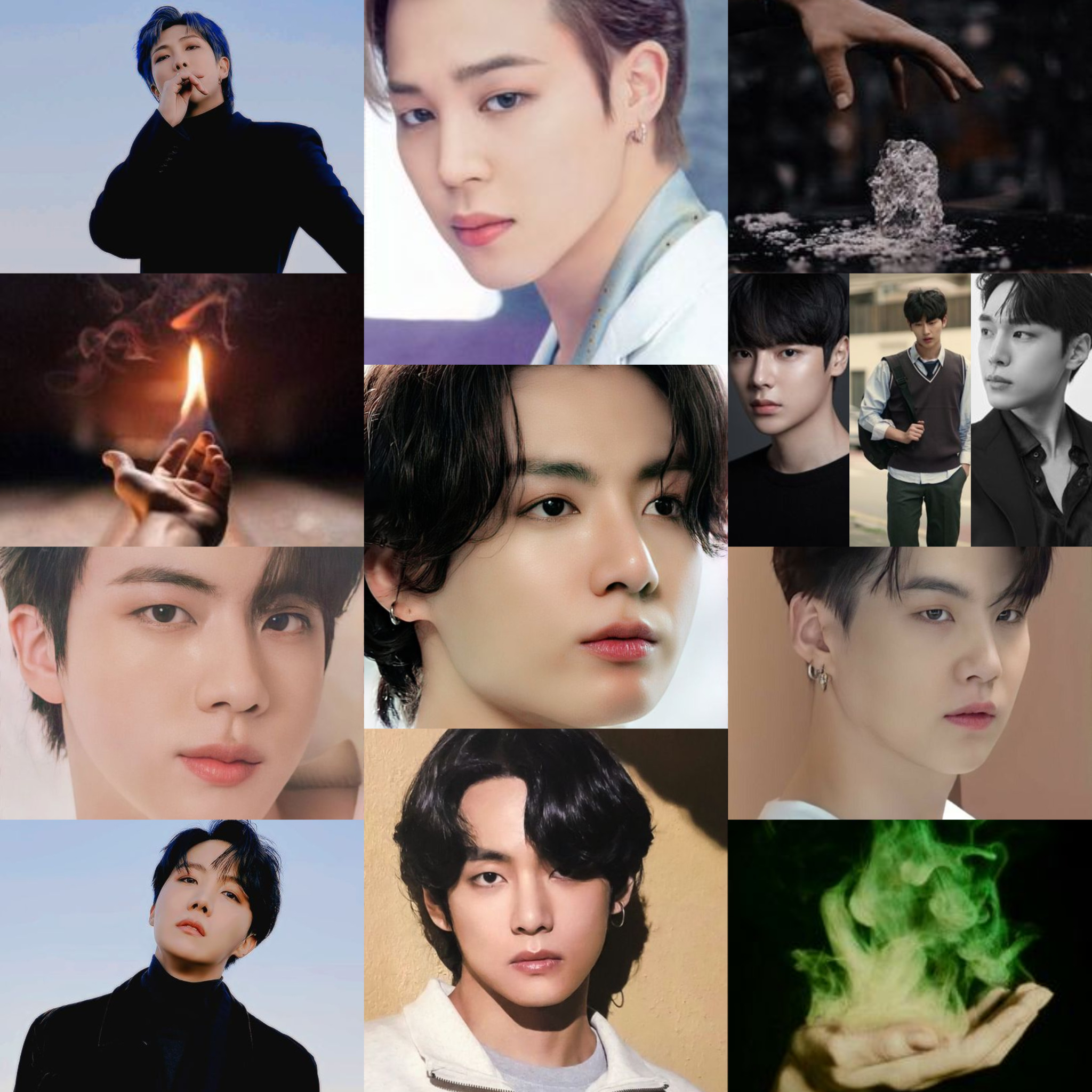 The room was dark and empty except for a young boy sitting on the ground in the center of the place.

Jungkook made no sound as he approached the figure. When he was a few feet away from the boy, he saw that his hands were restrained.

He stood before him pondering his next move when the other looked up. The boy's eyes were beseeching as they crossed Jungkook 's. “Please, help me Magic Knight Rayearth!”

“As you can see, the left tower of the cathedral is built in a different architectural style. This is due to the fire that burned down the structure in 1194.” The sweet aroma of freshly baked croissants wafted into his nose as a brown bag filled with the pastries, filled his vision. “Do you want to try some?”

Jungkook turned his head to his left at the question. “No, thank you.”

The young man standing next to him shook the bag in his hand. “You sure? They're really tasty.”

“Yes, but thank you for the offer.” As the other stared at him,  Jungkook noticed that his eyes were a dark chocolate.

“Can I have some? They smell really nice.” A sweet-sounding voice interjected from their right. Its owner was a smallish androgynous-looking young man whose full lips pulled up into a smile.

The chocolate-eyed man took a step back and extended the bag to him behind Jungkook 's back. When the other took out a croissant and took a bite from the fluffy pastry, a voice rang out suddenly, startling the three young men at the intensity of the anguish that put weight behind the words that filled the space around them.

“I summon you Magic Knights. Please help me save our world.”

A great ball of light appeared in the sky. With great speed it rushed towards them, blinding them as it engulfed them.

When the light faded Jungkook felt weightless. When he could see again, he saw a rock floating before him. He rubbed his eyes to see if what he saw was really happening when gravity made itself known.

But before they could crash to the ground, Jungkook landed on something soft.

“Did we get rescued by a flying fish?” A voice said from his left. The androgynous face of the young man sitting next to him was deadpan as he turned towards him.
His eyes narrowed, betraying the oddness of the situation.

The flying fish resumed his journey with them on its back as Jungkook looked towards his companions. “This is NOT normal. What happened to us?”

Before one of them could answer him, their ride dipped downwards and deposited them on the ground below.

Jungkook 's training kicked in, making him land on his feet. Next to him one of the two other men managed to roll over when he landed, while the other wasn't so lucky and landed on his back.

“Oh my, are you okay?” Asked the boy who had made the remark about the flying fish while he and Jungkook brushed off the dirt from their clothes. “You should take better care of yourself.” The rebuttal was answered by a look of disbelieve. “well...

“Do any of you know where we are, because I don't think we are in Chartres anymore.” He asked as he stood up from the ground. They shook their heads at his question.

“I didn't recognize any of the landmarks I saw around us when we were still on the flying fish,” Jungkook added.

Then a loud pop startled them, as the fish reappeared next to them. Making the others run from it while Jungkook let his curiosity get the better of him and approached the animal.
It was massive, with big eyes that regarded him as its transparent wings kept it afloat before him. At the bewilderment of the other two, Jungkook brought his hand to the animal's head and petted its scales. The fish? Began to flap its wings in excitement as Jungkook kept petting him as he turned towards his companions. “It's okay, he is a big sweetie. Look at how cute he is.”

“Gee, petting that thing would not be the first thing I would think of.”

“Well at least we now know don't have to run away.”

“We don't?” The tone was incredulous as the other regarded him through narrowed eyes.

“At least, not before we've properly introduced ourselves first.”

“It would be the correct thing to do, no? Hi, I'm Kim Taehyung. 26 years old and a student at Goryeo Daehakgyo. My blood type is AB and I'm a Capricorn.”

“In case I need medical assistance, of course.”

The other cleared his throat and introduced himself next: “My name is Park Jimin. I'm also 26 years old and a student at Yeonse Daehakgyo. I have blood type A and am born under the sign of Libra.”

Then it was Jungkook 's turn. He bounced on his feet and introduced himself with an enthusiastic voice. “I'm Jeon Jungkook, a student at Seoul Daehakgyo and 24 years old.”

“I'd heard prince Daon had summoned the legendary knights from the other world.” The new voice came from above. All three turned their heads at the source and saw the figure of a young man standing among the branches of the tree they were standing under.

The figure took a leap and landed before them. In his hand was a wooden staff taller than him and he was clad in a large blue cape that trailed behind him. His features were half-hidden by the hood covering his head.

“Does that mean that you're from around here?” Glad that there was someone they could ask questions, as he appeared to know what was going on, Jungkook addressed the man before them. “Please can you tell us why we're here and where here is?”

The man frowned slightly, his face withdrawn as he answered: “In the name of prince Daon, I want to welcome you to Cefiro. The prince brought you here to become his champions... The legendary magic knights.”

Please help me Magic Knight Rayearth. Triggered by the words of the man standing before them, the face of the young man sitting on the ground with his hands bound before him from his dream, resurfaced before Jungkook 's mind eye.

“Magic Knights. Sounds like some fantasy videogame.” Jimin uttered under his breath before he addressed the man. “Look, that's all fine and dandy, but all we care about is finding a way to go back home.”

"I'm sorry, but you can't return to your world.

You must accept the legend, regardless of what you think. You must become the magic knights and save this world, in order for you to go home.”