Tired of losses, a hunter and a vampire are both looking for someone strong enough to love.... 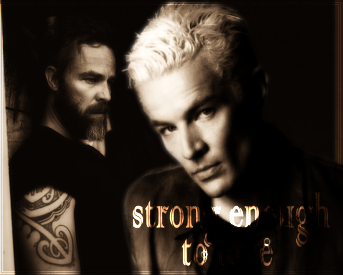 Just looking at him it was obvious he’d known loss – the sadness in those blue eyes was palpable. Spike found himself wishing he didn’t have to ask the man anything – he looked like one wrong word and he’d crumble. Not because he was weak – not with his reputation. But because he’d lost too much.

“Hey mate – heard tell you were looking for a hunting companion.” Lighting a cigarette, Spike waited for him to respond. He looked up wearily, a slight interest flaring in his gaze before it was dampened almost immediately.

“I don’t know what you’ve heard but you look a little too young to be of help to me,” he responded finally, his voice low and husky.

“Might be a little older than I look, yeah?” Spike replied, taking a seat opposite the hunter without waiting to be asked.

“I’m done sacrificing children to fights they’re too young to understand so why don’t you do us both a favour and fuck off?”

“Ooh, someone’s full of piss and vinegar when he gets riled up!” Spike snarked back. For some reason, it cheered him up immensely that the hunter still had some fight left in him.

Chris’s head snapped back with the force of the blow, seeing stars momentarily.

“SPIKE! A little help here!” He glanced over to see that the vampire was fighting two of the werewolves off, his movements graceful and almost balletic. “Enough dancing around – get this done!”

With a snarl, Spike whirled into action, easily snapping the necks of his two combatants before appearing at Chris’s side to give some assistance. From his position on the ground, Chris watched as Spike grabbed the werewolf around the waist and drove it backwards into the wall, the cracking sound of its spine breaking loud. Getting to his feet, he sauntered over and looked down at their captive.

“Not my fault you let him get the drop on ya,” Spike said. His eyes were alight with mischief as he turned to face Chris. “Besides, you know I love to watch when you finally lose your temper and give in – makes me wonder what you’d look like being passionate about other things!”

Chris deliberately ignored Spike’s provocative comment, knowing better than to respond. Sooner or later, he knew he would have to do something about the tension between them but he wasn’t ready.

“Fuck me, I knew when you finally let rip you’d be something but – god-damn, I think I’ve got smoke comin’ out me ears!” Catching his breath, Chris turned onto his side and up onto his elbow so that he could look down at Spike. His pale skin was decorated with bruises and bite marks, the bleached hair a rumpled mess.

“I knew I was up against over 100 years of competition – had to bring my A-game,” he replied, trailing the fingers of his other hand down Spike’s neck and appreciating the purr he received in response. He gripped Spike by the neck, seeing his pupils dilate at the tight grasp before he leaned down and kissed him. How he had been able to resist Spike for this long was a mystery, but in their time fighting together he had come to care about the vampire – a lot. And knowing that he was a vampire made it easier somehow – less chance of losing him to the battles they fought almost nightly.

He pulled back, gratified by the small gasp of disappointment. Spike leaned up into the pressure against his throat, blue eyes gleaming with renewed arousal.

“Show me your A-game again.”