I love my Father

Adrian is 16 years old here. Lisa died when he was a child. He longs for his father, but Dracula is on the path already.

And for the first time in my life..I found myself standing there with something other than the need to bond... I’ve stood there before..When I would contemplate my Father’s wellbeing. His reasons for the way he’d act...And now..the very opposite.

In my Father's chamber. Like that. I undid the curtains and the sun shone. Protecting me in its glorious golden embrace..Protecting me?... Why…..so warm on my skin yet cold in the air.. Bright and clean. Greeting me...and opposite me laid my Father, who would never get to greet the sun..

Adrian remembered. He pulled his collar down to inspect its beauty in the morning sharp sunlight.

The shine was of sea-green with its natural inclusions.. Small imperfections made the stone rare and of natural origin. Lisa’s favourite was emerald, though she never dwelled on gems and precious metals.

Never the one for spoils and riches when all the treasures lay in knowledge. If she had to have one, and Dracula insisted, she chose emerald.

Vlad made it out of Lisa’s engagement ring after she died so that his son could always have something she loved with him..

...to remind me that she loved many beautiful things, many gifts from nature..but most of all she loved me.. I was what she loved in nature the most. How strange, for my existence is anything but natural...and yet she loved me so...Mother…

Adrian found himself staring at Dracula’s resting place. A stone-built sarcophagus. Massive in size. Ancient writings he barely understood or managed to read. His Father’s only hiding place when the sun ruled. 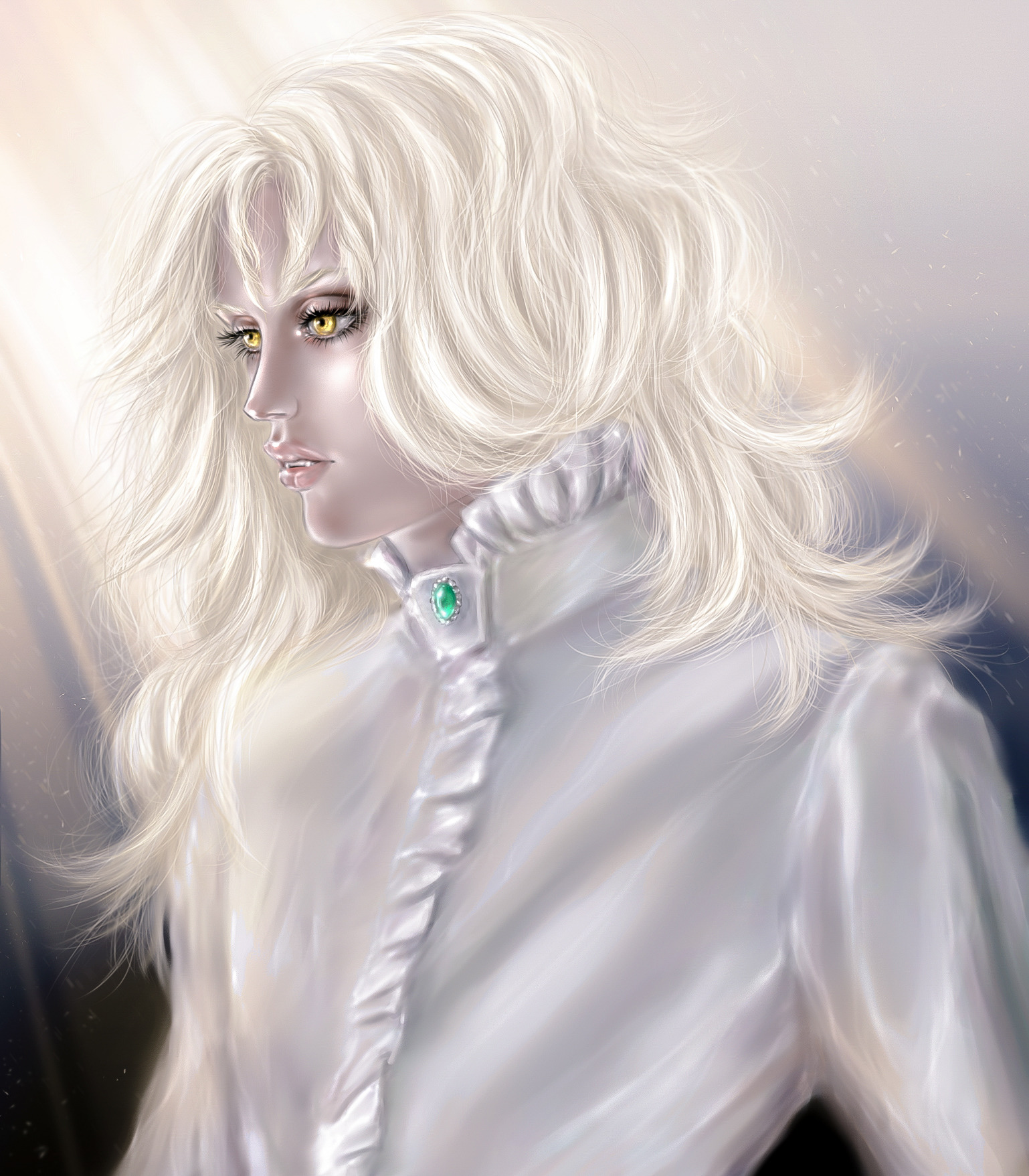 And the horrid thought that went through the mind of the young dhampir.. that if I ever was to do this..it would be now..at this time..in this chamber..morning hours..

If I ever was to defeat the..broken being my Father has become..It would be at a time when I had a chance of surviving his wrath..chance of fleeing should Father overpower me..and that he would, but I cannot let that thought stop me...It would feel...gutless..and just about tens of other horrible emotions... Sneaking like a rat..Moving the large stone.. Leaping onto him in his weakest hours.. In protection of his only nemesis.

Adrian took a step back. He didn’t even know why, perhaps the fear of his Father was so deeply instilled,  just the thought of going against him made him submit..He could feel eyes on him even at that moment..Father’s ever-seeing eyes..

...or maybe I was just paranoid with worry that Father would even suspect that I was in his chamber..considering such a deed. Would he kill me first? If he knew..If? Of course, he knows..by now he must know..I have thought about this for months. There is no way he doesn’t know..

I first suspected he read my thoughts when I was very young...around ten years of age..I felt it happening to me.. I don’t know whether he did not expect me to..whether humans cannot feel it and he assumed that as a half-human-being I wouldn't either but..I felt it..how it feels..to have someone present in you head..just in the back..if there ever was such thing as a back of a mind..privy to all my dark and innocent secrets…

I was very angry at him but said nothing..I should have..to this day I think about all the things I could have said in that moment..I did not know how to confront Father and still to this day I never learned how....but I was sure he would do it again..and maybe even does..when I sleep?..When I’m tired?..When I’m so angry and lost in despair that I no longer have any back of my mind?.. Does he know his son needs him dead?... Does he know I need him…..just...need him….or..would he...let me do it?..

Adrian shook his head. Displeased expression and squinted his eyes, turning to the sunlight. As if it had answers to his dilemma. He took a look at Mother’s emerald once more.. It calmed him, he took a deep breath and imagined himself swimming in the colour of the gemstone. Its tranquil colour..turquoise green..

Like the sea..I've not been to sea for years..

Nothing is ever to be enjoyed..nor laughed at..No laughter..no joy...just everlasting pain..In the Castle Dracula... that feels like it was made to make the pain last forever. I have always disliked Father’s castle. More than any other place. He owned many..yet we had to live here.. He said it was safer and after Mother….

Dracula’s pain, his grief was merging with Adrian’s sorrow. The teen's longing, he needed his Father so much.. but being alike, together..the two merged states of despair ended up hating each other.. Their feelings would form powerful energies of their own, pushing them apart. Something so normal. Two utterly sad people, unable to find a way to help each other. Too consumed by their own pain.

Their hurt was making them compete for who was in the worse state on a given day.. Slowly driving them apart further and further.. Who would mourn the most?

“Daddy, look!.. It’s the brightest star! As bright as the moon! Have you seen it before? It followed me around, you know?”

“Ahah..” Adrian chuckled and lost himself in a happy childhood memory. When he was still allowed to call this distant cold man his 'Daddy'…

He swallowed, pressing his tears back where they were coming from. Something rustled and startled him.. Nothing. Empty cold chamber and white gold sunshine.

The teen returned to his part of the castle, hoping he could forget the dark temptation, but somehow he could not shake the feeling it gave him. It felt right to want that. It felt...justifiable.