Echoes in the Library

"I like the way you look at me," Jungkook says.

"Like...you're reading a really good story,” Jungkook whispers. “Like you want to see the ending."

Originally posted to twitter May 17, 2021. Reworked for AO3. Extended ending. 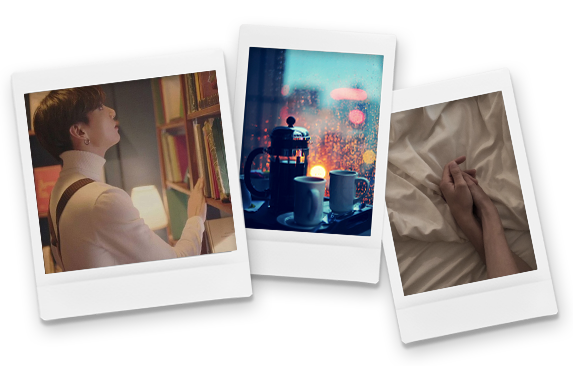 Stepping foot in the library triggers a rush of serotonin for Seokjin. The woody smell of old paper brings instant comfort the moment he pulls on the door.

These days, it’s where Seokjin’s heart is happiest—and maybe a little nervous as he approaches a wide-eyed attendant.

"Sorry to interrupt. I was hoping you could recommend a good book for me?” Seokjin asks the cute employee—Jungkook printed on his name tag.

Jungkook lights up. “I know just the book, follow me.”

The two make their way to the far reaches of the fiction section. Jungkook reaches up high and pulls a thick book off the shelf, laying the heavy volume in Seokjin’s hands.

“It’s one of my favorites,” Jungkook admits. “A time traveler visits his soulmate again and again at different points in time. They...kinda fall in love on repeat. It’s a little sad, but it’s worth it.”

Seokjin fumbles the book in his hands, running his fingers over the worn edges. “Does it have a happy ending?”

Jungkook leans forward, as if to share a secret. “Don’t worry. I wouldn’t play with your heart like that. My good name is on the line,” Jungkook says proudly.

The two lean against the bookshelf and joke about terrible time travel plots. How no one ever seems to jump forward and just say, “This is great. Fuck it, I’ll stay here”.

They laugh about how time travel movies require 50-slide PowerPoint presentations just to make sense of them.

“This book though...” Jungkook nudges Seokjin’s shoulder, “does everything right. You won’t be disappointed.”

Seokjin gulps and tucks the volume under his arm.

“Hey I...uh...know this is forward of me. But maybe you can tell me more about it—over coffee? After your shift?” Seokjin asks nervously.

Jungkook raises his eyebrows and Seokjin grows sick waiting for a response. The quiet drags on for seconds (that feel like minutes) before Jungkook bites his lip and nods. “Sure,” he blushes. “Meet me at the cafe across the street in two hours.”

They meet up that evening, hands wrapped around warm mugs, multi-colored raindrops clinging to the cafe window beside them. The reflections create jeweled constellations in Jungkook’s eyes as he talks about his job at the library, his favorite books. About his tiny apartment a few blocks away. “It’s quiet, but it’s too quiet,” he says. “Sometimes I just want to be around people. Not even necessarily interacting with them...just...hearing them. Not feeling alone,” Jungkook admits. “I think that’s why I like working at the library so much.”

Seokjin talks about his job as a nurse. It’s a newer career for him, and he loves helping people, but the stress of the job is enormous. “Sometimes, I’d like to just pack up everything and move away from the city,” he admits.

Jungkook swoons at the notion, saying he loves the idea of moving to the countryside and “just vibing”, he says. “Growing my own food, maybe writing a book myself someday.”

Listening to the soft tones of Jungkook’s voice is like therapy. It eases the anxious parts of Seokjin’s soul, hearing the boy full of hope and wonder about the future.

“It might be a little lonely though, don’t you think?” Jungkook questions. “Being out in the wilderness, all alone?”

Seokjin sits up straight. “Who says you have to be alone?” he quips.

Jungkook’s shoulders slouch, folding in on himself, staring at his coffee cup. “I dunno...been alone for a long time. I know it’s pessimistic, but I think some people are just destined to be alone?”

Seokjin can’t take it anymore. He reaches across the table and threads his fingers between Jungkook’s, snuggly wrapped around the mug.

“You’re not one of those people, Jungkook.”

Seokjin searches his eyes for a sign. Something. Anything.

"I like the way you look at me," the younger man says.

And how does this story end?” Seokjin asks, looking down at their intertwined hands.

“Maybe it ends with you coming back to my place?” Jungkook questions cheekily.

Seokjin can’t help but feel an overwhelming sense of familiarity, as he gets up and sits beside Jungkook, tucking a lock of hair behind his ear.

They exit the cafe, the chilly night air stinging their cheeks. Seokjin links their hands and tucks them in his coat pocket as Jungkook guides them down the street to his flat.

Seokjin can’t help but stare as they walk. The lights reflect off the wet pavement and onto the black locks of Jungkook’s hair. It leaves him breathless.

Jungkook stops in his tracks and looks directly at Seokjin. He takes a step forward, hands still intertwined.

“Don’t apologize,” he says darkly, eyes drifting to Seokjin’s parted lips and back up again. “I like it...your eyes on me. It feels warm.”

The door of Jungkook’s tiny flat barely closes behind them before they’re kicking off their shoes and Jungkook is gently pressing Seokjin to the wall, kissing along his jawline. “Is this okay?” He whispers into his ear.

Seokjin doesn’t even answer, just turns his head until his plush lips drag across the younger’s. “Yes. Need this,” he whispers as he runs his hands under Jungkook’s shirt, dragging his fingertips over the warm skin. “Let me make you feel good?”

That night, Seokjin takes his time. Warming up every inch of Jungkook's body with the wet heat of his mouth. Relishing in the tiny sighs each gentle thrust elicits from Jungkook’s lips.

It's slow, sleepy, and rhythmic—sinking into the younger man feels achingly familiar. Like coming home. Like this is where he belongs.

For a moment, Seokjin forgets everything else. It’s just him and the angel beneath him, releasing tiny prayers into the air; pleading in short, staggered breaths before spilling between them.

It’s not enough and it’s too much, Seokjin thinks as he buries his face in Jungkook’s shoulder, grinding through his release.

Jungkook can barely keep his eyes open once they're sated, so Seokjin quietly cleans him up, tucks him into bed.

Seokjin sits on the edge of the bed and kisses one cheek, then the other.

"Leave me your number?" the boy says softly.

The reality of their situation hits Seokjin like a truck. They moved so fast.

Seokjin’s head falls, hiding his emotions with a tight smile. But before he can answer, he notices Jungkook’s chest rise and fall slowly. Clearly asleep.

Seokjin brushes the hair from his eyes and gets up, giving Jungkook one last glance before grabbing his bag and heading back out into the night, letting the door click behind him.

It’s better this way, Seokjin reminds himself. Better that he never knows.

Jungkook doesn't need to know that Seokjin hops on a train, fighting sleep as he returns to the library that night.

Doesn't need to know that Seokjin slides his library book into the return box before heading home, never reading a word.

Doesn't need to know that once upon a time, Jungkook loved Seokjin. Doesn’t need to know how Seokjin nursed him back to health after the accident.

Doesn't need to know how Seokjin fought...just to be remembered.

How the nightly reset button in Jungkook’s mind became his enemy.

Jungkook never needs to know that Seokjin...eventually gave up.

But only for a while.

Because just like today, Seokjin will be back at the library next week, desperately hoping to see a spark in Jungkook's eyes that he didn't notice the week before.

‘All things considered, it’s not that bad,’ Seokjin tells himself as he marks his calendar.

There are far worse things in life than falling in love 44 times. Worse things than 44 first kisses.

Which is why, despite the pain, Seokjin treks to the library again and again. He seeks out the same boy and asks this same tired question, “I was hoping you could recommend a good story—”

And Seokjin will wait for the same polite response he always gets. He'll grasp at any sign of warmth he can find behind Jungkook's eyes, braid the threads together and thank the gods for every one of them. And he'll keep collecting threads until the day he hears...

Jungkook’s eyes will tear up in the middle of the fiction section, welling up with the very memories Seokjin thought were lost forever. Not all of them—not right now, but the ones that mattered most. The ones that loved Jungkook the most.

And on that chilly day in November, Seokjin gets the happy ending to the only story he ever truly cared about.

Seokjin learns two important things in the weeks that follow that dazzling, beautiful moment—when Jungkook's mind finally recalls what his heart remembered all along.

The first is revealed one morning when Seokjin opens his eyes, light filtering through the windows in slow, golden lines across their bedroom. He feels the weight and warmth of Jungkook on his chest, and reaches down to sleepily brush his cheek when he realizes his fingers are wet.

It takes a moment, but Jungkook lifts his head, a mop of messy curls falling over his reddened face, lips trembling.

"What is it, baby?" Seokjin worries as he pushes Jungkook's curls from his forehead.

"I remember, hyung. All those times you came back for me? I remember it all."

In that moment, Seokjin learns that love is never wasted. Even when it eats you alive; even when it's not returned. The remnants of broken hearts are lovingly gathered by the universe, patched together, stored in quiet places until you're ready to give again.

The second thing Seokjin learns is that, yes—there are far worse things than 44 first kisses.

But there's far better too.

Like second kisses and thirds. And thousandths. Like waking up to the same smiling face every day, sleepily breathing your name into your skin.

Like making breakfast together, placing lazy kisses to each other's cheeks, and knowing it’s finally, finally—the first of many.

Thank you for reading! Kinda 50-first-dates-ish? I know amnesia fics are not everyone's cup of tea, but I hope you enjoyed this tiny one.

Side note: The book JK gives Seokjin is "The Time Traveler's Wife" because it's my favorite book and I love projecting.

Thank you for any love sent in the comments! Each one means so much to me.