Din has never been on a date before.

Din has never been on a date before. He's never even heard of the word "date". But Cara convinces him to ask Luke out on one anyway despite not knowing what to do on a date. Cara gives him a rundown anyway. He needs to look good (doubtful), pick a place to spend time in (he knows a lot of places), pick a scenic route (he always preferred shortcuts), get flowers (he can do that), and woo the object of his desire (if Din knew how to do that he wouldn't have asked Cara for advice in the first place).

So Din planned. Thought of ideas. Scrapped everything. Planned some more. Researched and asked the people he knew, very subtly, the perfect place to take a person out. Boba just stared at him and said "Where they stand". Din thought that Boba didn't get the question. Peli gave him a pitying look and asked if she should get him checked out. Cobb gave him a full demonstration on how to woo the gal of his dreams and Din didn't have the heart to tell Cobb that he wasn't into the kind of specific "gal" he was referring to.

It took Din a month to plan everything in the end. He got flowers Luke said he liked that one time so long ago when they were lounging in the garden while Grogu ate the local insect population. He made sure that his armor was clean and polished and his ratty cape replaced. He told Leia what he was planning so that Luke wouldn't leave the school unattended.

Din even got his ship fully cleaned and fixed, as much as an old ship can be fixed on short notice(thank Manda for Peli Motto). But the moment he landed on the hangar and stepped out of the ramp his nerves got to him. What if Luke refused? What if Luke didn't actually like him? What if the endless months they spent orbiting around each other were purely platonic on Luke's part?

"Kriff. Kark. Arghhhh..." Din can feel his anxiety spike. It was easy to plan everything out from scratch but the hardest part was always getting Luke to agree on a date.

Before Din could go back to his ship and mope around for the rest of the day, he was pulled towards the opposite direction by a giggling green gremlin.

"Grogu, put your buir down!" the man of his dreams shouted from another direction Din wasn't privy to because he was currently floating upside down while staring at his very small but very chaotic child.

Din felt a gentle pull from the ground and he saw Luke, with his sunny glow and dark Jedi clothes, walking up to him with an apologetic but warm smile on his beautiful face.

If someone asked him what happened after that he couldn't actually say because the moment he felt his feet on the ground, he knelt on one knee. Din looked up at Luke and saw a future with this man that he never knew was something he could ever want.

He saw a powerful man that could move objects with his mind. A kind man who was so gentle with his words when talking to his students. A caring man whose hands have healed him time and time again after every single time he said that he was feeling fine but he wasn't.

Din held his breath and took out a bouquet of Luke's favorite flowers. 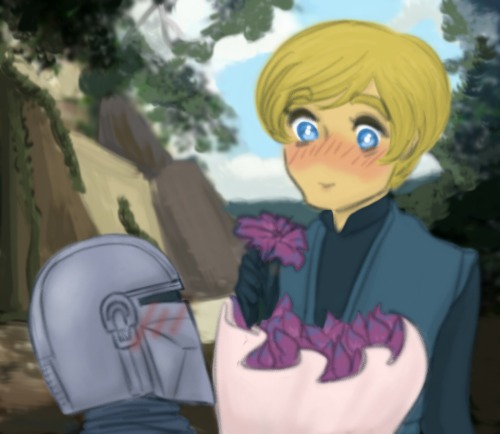 "Um..." his vocoder was the only thing that's keeping his voice steady. "I got you some..." Din gestured at the bouquet in his hands. "...flowers."

"Yes, I can see that," Luke stared down and took hold of a few petals. His gloved hand looked deceptively fragile while he caressed them.

Din looked down at Grogu who was already chewing on a particularly long flower stalk.

The DinLuke server has inspired me once again so I wrote this while eating vanilla ice cream soup.
"Ni dinui brokar gar" means "I give to you" in Mando'a.

The art from this fic is from lil-ace-of-spades on Tumblr.