im in a sappy mood

Iruka glanced up, almost elbow deep in soapy water in the kitchen. “Eh? What?”

“Get in here!” Kakashi yelled again - he sounded like he was clear across the house.

Grumbling to himself, Iruka shook out his hands, and then quickly dried them on the already soaked dishtowel. Rebuilding the structure of the Hatake estate had been difficult enough, but unpacking and cleaning the amazing amount of Hatake family heirlooms had been a whole other matter, let alone unpacking and organizing their own stuff.

Iruka had quickly taken up residence in the office, putting all his school textbooks, seal work, and other such academic works on the shelves. Kakashi had prominently displayed his Icha Icha collection in the living room, despite Iruka's failure at a calm discussion about it. After waving his arms about and talking about how he was apparently living under the same roof as a pervert, Kakashi had annoyingly pointed out that the orange cover had never deterred Iruka from approaching him in the past.

Iruka had been going through the very fine porcelain (some of the stuff looked both 100 years old, and worth more than Iruka’s monthly teaching paycheck), cleaning and carefully storing away. Kakashi had shrugged when Iruka had asked what to do with it all - he had no memories of them and they meant little to him, but Iruka couldn’t bring himself to just pack them back up. They had to be used as intended!

Rubbing his palms on his pants to get the last of the moisture off, Iruka wandered through the still somewhat unfamiliar layout of the home. He would never let Kakashi know that he somewhat missed the cramped apartments, the inability to avoid one another. Now, he had several rooms and hallways between him and Kakashi. But, if they ever decided to start a family, this manor was much better suited than either of their previous apartments.

“I’m coming!” Iruka yelled back, and tightened his ponytail with a roll of his eyes. When Kakashi wanted something, you’d be damned if you were ever going to get peace until the situation was resolved. Iruka really hoped Kakashi didn’t want to have sex right now - he was not in the mood, and he had a bunch more boxes to go through.

Finally, Iruka located Kakashi in a back room that was still full of boxes. He was sitting on the floor playing with something in his hands, the late afternoon light glinting off his silver hair in that magical - almost like it was water - way. Iruka paused at the door, and leaned against the shoji frame, his annoyance ebbing out of him quickly.

“What’s up?” Iruka asked, folding his arms gently across his chest, and he tried to puzzle out what Kakashi had in his hands.

“I found my old camera collection,” Kakashi glanced up with a grin.

“What camera collection?” Iruka dumbly asked, confusion settling in him.

“I practice photography - you know this,” Kakashi chided, and stood up. He held up the object in his hands, a prideful look crossing his features, and Iruka suddenly recognized it as a very antique type of camera - the kind that you had to manually collapse. “I used to collect cameras and vintage photography equipment. I ended up shoving it in here when I got assigned with Team 7.”

Iruka stepped into the room and took the camera that Kakashi handed him. It was old, but it didn’t look rusty, and the lens looked in good condition. Beyond that, he knew nothing of cameras. “Do you have any of your old photos?” Iruka asked curiously, turning the camera in his palms. It weighed a lot more than it looked.

“Probably,” Kakashi shrugged, and ran a hand through his hair absently, his fingers catching in the mess. Iruka would offer to brush it out later when they took a bath, but for now, he was too absorbed with the idea of Kakashi bringing a camera out of his pack to snap a few pics of places he’d been to on his missions over the years. “I was wondering though….”

Iruka glanced up at Kakashi’s face, and he didn’t miss the pink blush riding high on Kakashi’s cheekbones. He waited for Kakashi to finish his thought, but apparently it was embarrassing enough that he wasn’t going to spill. If it was anything to do with sexy pictures, Iruka knew there would be approximately zero embarrassment, so this had to be about something else - something cute and sentimental.

“You’re adorable,” Iruka murmured, a grin slipping across his lips as he moved forward, and hooked his arms around Kakashi’s shoulders, the camera resting at the nape of his neck. “What are you wondering?”

“Do you wanna take a picture with me?”

It was so innocent, and sweet that Iruka giggled at Kakashi’s misplaced anxiety. “You’re so cute.”

“Stop,” Kakashi leaned away, his mouth in a full pout, and Iruka pushed up almost on his toes to catch those lips in a quick peck.

His arms instantly wrapped around Iruka’s middle and squeezed. He quickly kissed Iruka on the lips, and then the tip of his nose. “Cool, come here.” Kakashi dragged Iruka by the waist over to a mirror he had shoved against the wall, and knelt on his knees, as he screwed the camera onto a tripod.

Iruka couldn’t help but run his fingers through the mess of silver in front of him, and Kakashi leaned into the touch slightly as he worked. He kept his eyes averted from Iruka’s reflection as he adjusted knobs and little things that Iruka didn’t care about, as he trailed his fingers down Kakashi’s neck, and felt the small jut of bone at his spine, and then squeezed the junction of neck and shoulder gently. Sometimes he still couldn’t believe Kakashi’s was his to touch, to press into, to hold. It brought up a lot of crazy emotions and sensations in him whenever he dwelled on it.

Finally, Kakashi seemed satisfied after he checked his focus through the viewfinder, and he glanced up at Iruka hovering above him. The raised eyebrows asked a question, and Iruka nodded in return, only to have his hand dragged over Kakashi’s shoulder, and clutched to his chest.

“Say cheese,” Kakashi said, looking into the mirror, and Iruka smirked, unwilling to break the magic of the moment with a stupid word.

Kakashi didn’t seem to mind, as his face split into a toothy grin - a rarity to see, and he clicked the shutter button. The smile almost blindsided Iruka, and he found the blush creeping into his cheeks as he felt his chest expand with the sappy feeling that Kakashi always claimed was in his stupid books.

Their eyes caught in the mirror, and Kakashi smiled even harder, as he shifted and leaned back against Iruka’s stomach, and he let his head fall back to look up at Iruka, and squeezed his fingers still caught in his hand.

“I’ll get it developed soon,” Kakashi beamed. “Thanks!”

“No problem,” Iruka felt his voice catch in his throat and he shook his head slightly.

The pink dusting was back on Kakashi’s cheeks as he stared up at Iruka with sparkling stars in his eyes. “Let me take more pictures of you?”

He looked so sincere that Iruka had to blink heavily to try and refocus his eyesight, and he twisted his mouth into what was no doubt a goofy grin. It was stupid, but he’d never had anyone that wanted to take pictures of just him besides his parents.

Kakashi caught onto the hesitation and he squeezed Iruka’s hand again. “Please?” he asked, with a sweetness that ached in Iruka’s chest.

“Sure,” Iruka shrugged again. “But only if I get some of you.”

“Hm,” Kakashi thought about it, his eyes falling back to the mirror in front of them. “You sure you want a bunch of pictures of this ugly mug?”

Iruka bonked Kakashi on the top of his stupid head with a firm fist. “Shut up; you’re so handsome it’s almost disgusting.”

“You’re the handsome one,” Kakashi protested with a grin.

“Okay, but only if I can do a boudoir shoot of you,” Kakashi smirked with an evilness that made Iruka question why that kind of excited him.

“No promises,” Iruka muttered, and Kakashi’s head instantly fell back onto his stomach so he could look up at Iruka, the stretch of his neck on full display.

“Not a no,” Kakashi looked like the cat that caught the canary, and Iruka looked away - his face was surely a terrible red. “But to be serious, I want a bunch of memories of us. Of you. Here, in a home we are creating.”

Iruka had had enough. He bent over and kissed Kakashi’s raised face upside down. It was awkward but it was sweet, and chaste, and Iruka couldn’t help the rush of what he could only describe as adrenaline. That was what Kakashi did to him: he made Iruka feel very, very alive.

“Okay, sure,” Iruka muttered into Kakashi’s mouth. “All of the above.” 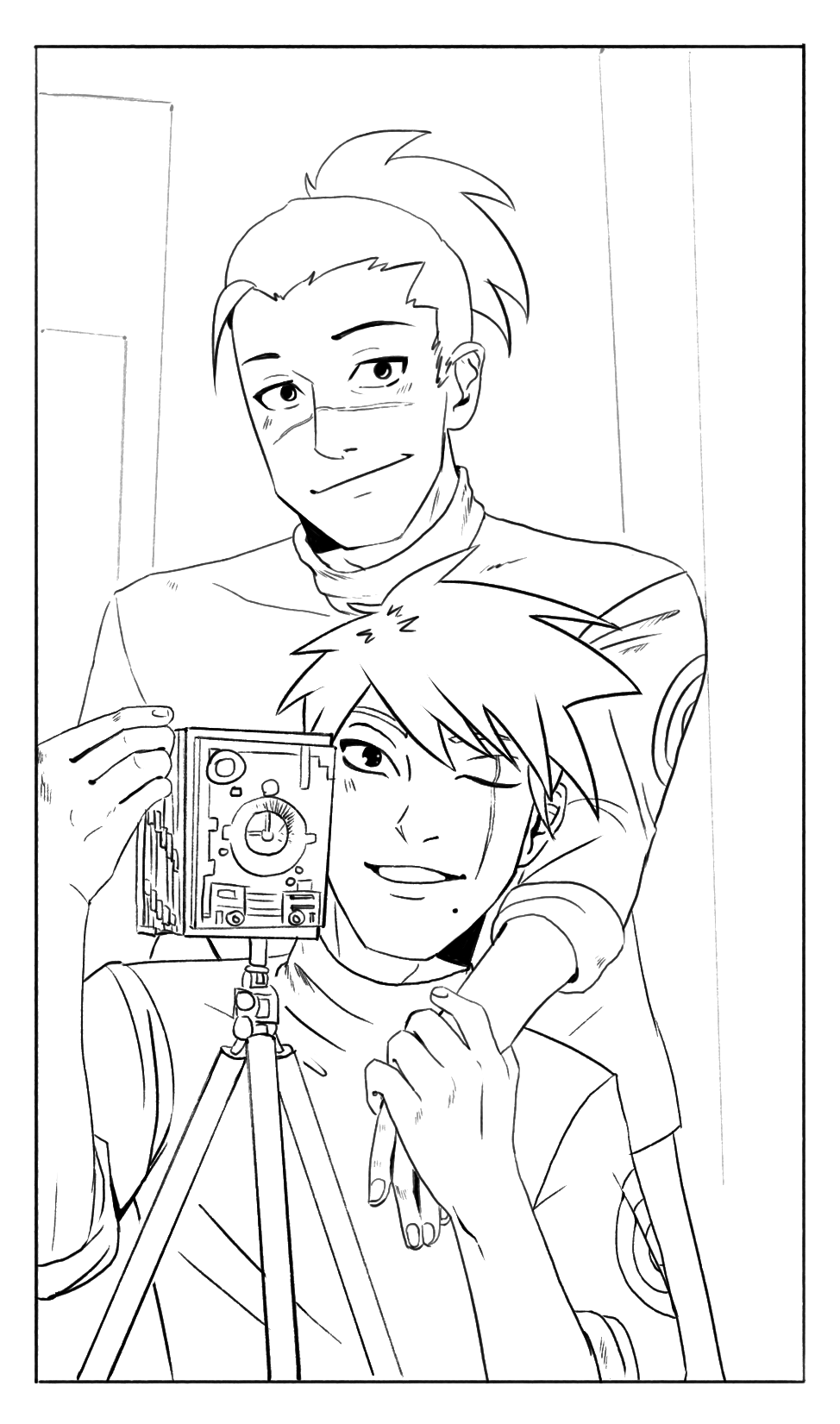 art by me, referenced from an old japanese photograph found here