Just dipping my foot into The Witcher fandom. Thought Jaskier being sweet to Roach would be cute.

All that could be heard in the dry rotted, worn down, drafty stable was the constant hum of insects chirping far and wide. It was a noise that Jaskier always welcomed. No matter where he was at, he could always rely on the insects of his latest destination to lull him into a restful slumber. Jaskier longed to be able to write a sonnet as beautiful and serene.

"Do you like the bugs, Roach?" Jaskier's voice soft as it melded into the buzzing night air, his hands just as gentle as they brushed over the slick hair on the thoroughbred before him. A puff of air steamed from Roach's nostrils as she gave a half-hearted snort.

Taking that as confirmation, the smallest of laughs huffed from Jaskier's lips, "I thought you would. They're your own melody at nighttimes, huh?"

If Jaskier had been less attentive to the chirping and Roach's hooves crunching on the hay beneath her, his ears would have tuned into the sound of boots on dew covered grass.

Dew flicked onto the leather of Geralt's boots as he stopped his paces towards the bard, a low tune emitting from splits in the wood of the stable. With arms crossed over his chest, Geralt listened as Jaskier's heart beat could be heard in his ears, steady, warm and light.

The mixture of insects, hooves and heart beat were all drowned out by the bard's voice cutting through the night,

"I'd lead you by the hand,
If only you'd only let go of the reigns,
I can lead this horse to water,
But I cannot lead your lips into my kiss."

Jaskier's voice faded, a soft sigh could be heard as he fished an apple from the pocket of his vest, "That ones not quite finished. It doesn't feel right, but thank you for listening anyway, Roach." Roach paid him no mind as she took the apple that was offered to her, teeth crunching down, juice speckling over Jaskier's forearm as he gave her head a gentle pat.

Geralt always fiend annoyance at the bard's songs and prose, but secretly he always longed to hear more. He cherished the way Jaskier's voice echoed in his ears as he sang. The way he could feel the vibrations in the air as Jaskier plucked away at his lute. The experience making his fingertips tingle and head feel light.

Making more noise than necessary, Geralt forced his steps into a quickened pace as he crossed the threshold of the stable, "Are you feeding my horse?" His voice low, almost too low to be casual.

The tension that rippled through Jaskier's body could be seen in his stiff shoulders, "Gods, Geralt. Don't sneak up on a man like that." Turning to look at the gray haired man behind him, Jaskier shook his head, "And yes, I gave her an apple. She deserves it for hauling your ass around all day."

Roach had a soft spot in both of their hearts, even if Jaskier never got to ride on her back, he still cared for her as if she did. Her whines and neighs filled the silence of their journeys when words fell short and songs ran dry.

"We have to rise early tomorrow." Geralt's voice held a tone that spoke silently of something more he wished to say. But he didn't dare utter his appreciation to the bard.

"Yes, yes. I know, must be rested for a tiresome walk that will last all day." Jaskier quipped, a sunken frown etched onto his face as he could already feel his legs growing tired from the mere mention, "G'night, Roach." He spoke over his shoulder as he stepped towards Geralt, "You know, maybe I could ride her for a little while tomorrow."

"Hmm." Came the hum from low in Geralt's throat, ears zoning in on Jaskier's heartbeat again. The pace had quickened slightly, heavy and droning.

Jaskier clapped a hand onto Geralt's shoulder, arm falling around Geralt's shoulders, "Just a suggestion." He smiled, eyes cast to the ground as they walked side by side. Strides falling in time with one another. Boot clad feet crunching over gravel.

Small, friendly touch such as this wasn't uncommon, always one sided, but anytime it occurred Geralt held his breath. Trying to sear into his mind exactly how it felt. Just how much pressure was applied. How long it lasted. How warm Jaskier's fingers felt through his tunic. And every time as soon as that hand was gone Geralt couldn't bring the feeling back into his memory.

Exhaling slowly, Geralt's arm snaked its way up around Jaskier's waist, pulling him closer to his side, a silent thank you hanging in the small space between them. The warmth from Jaskier's torso flaring up his side and Geralt never wanted to let go.

Mind going blank at the sudden contact, Jaskier kept quiet, not wanting to push his luck with his own babbling of thoughtless words.

"Perhaps you could ride her tomorrow...if she'll allow you. I suppose you feeding her extra should come with some reward." Geralt grumbled lowly, pace slowing to a halt, Jaskier following suit.

Their shared breathing was all that Geralt could focus on, his inhales steady as his exhales wavered. Jaskier's heart beating rapidly in his ears was too much, too overwhelming. He didn't dare meet the eyes that he could feel boring into his own, Jaskier not hiding his confusion, but didn't dare break the silence for once in his life.

"I-Jaskier, thank you." The admittance was almost inaudible. Jaskier wouldn't have caught the words if he hadn't been so intently watching the man who held onto him.

Grasping at any words he could think of, seeming to of forgotten all of his vocabulary, Jaskier's mouth opened and shut far too many times for Geralt not to chuckle at him low in his throat, his eyes finally meeting the bard's.

"Don't laugh at me, Geralt. You're-you... you're welcome?" His body leaning further into Geralt's side, the tension in his body fully discipating, fingers on Geralt's shoulder pulling him in tighter, "It was merely an apple. She seemed to appreciate the midnight snack, just like her handler."

Geralt's hum of agreement was more of what Jaskier had become accustomed to, and he welcomed the sound as it resonated in his ears, mixing with the cicadas in the fields nearby.

Wind kicked up around them in the path way to the inn, leaves bustling over their planted feet, Geralt's hair blowing half hazardously into Jaskier's face, the bard not seeming to mind in the slightest as it tickled over his nose, eyes only scrunching up in the slightest.

The warmth that radiated off of Jaskier and into Geralt's side was a calming experience that Geralt hadn't felt in a long while. The comfort of another body against his own wasn't on his mind as of late, but he wondered how long he could stand there. How long Jaskier could go unquestioning why they were stopped in the middle of a pathway when a warm room was a mere hundred feet away.

Gold eyes were downcast to stare at Jaskier's chest, and with one step to his right Geralt was in front of Jaskier, the warm arm falling from his shoulder as he gently brought a calloused hand to rest on the curve of the bard's neck.

"Geralt?" The question spoken into the wind between them, whipping around their bodies in a silent dance.

Question unanswered, Geralt leaned his weight forward, fingers squeezing the back of Jaskier's neck ever so gently as he placed a chaste kiss upon his cheek.

There was no use in trying to sort out his own thoughts as Jaskier's mind fell alit with so many more questions. What is this? Why? Is this all because of an apple? But still, Jaskier kept quiet, his eyes searching Geralt's face in the star light. His own hands hanging lamely at his sides, fingers itching to reach out and touch the Witcher before him.

"Early morning." Was all that Geralt rasped, hand falling from the neck he caressed just moments before, "Must sleep."

Before Jaskier could retort, Geralt's stride had picked up, feet barrelling him towards the inn, leaving Jaskier dumb founded on the pathway with only his heart beat and sounds of insects humming in his ears. 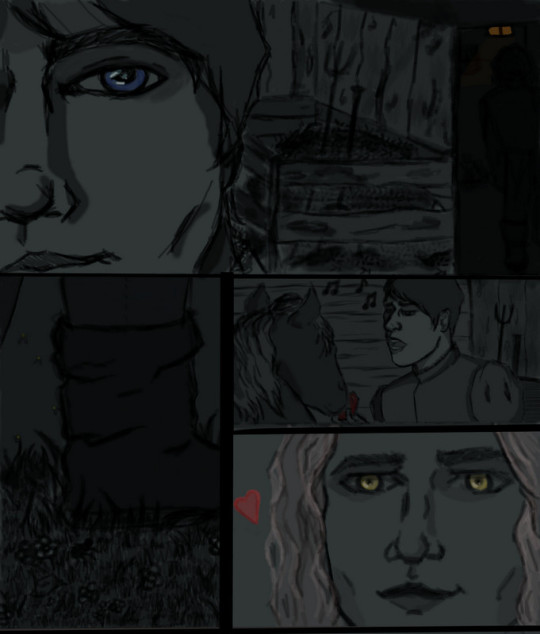