I want you to only look at me

5 times when Loki flirts with Mobius who is completely flustered and once when Mobius retaliates.
or
Loki will learn that teasing Mobius has consequences (but that he will enjoy these consequences).

Tumblr request : Can we have some Lokius where Loki is super flirty and we get flustered mobius??? 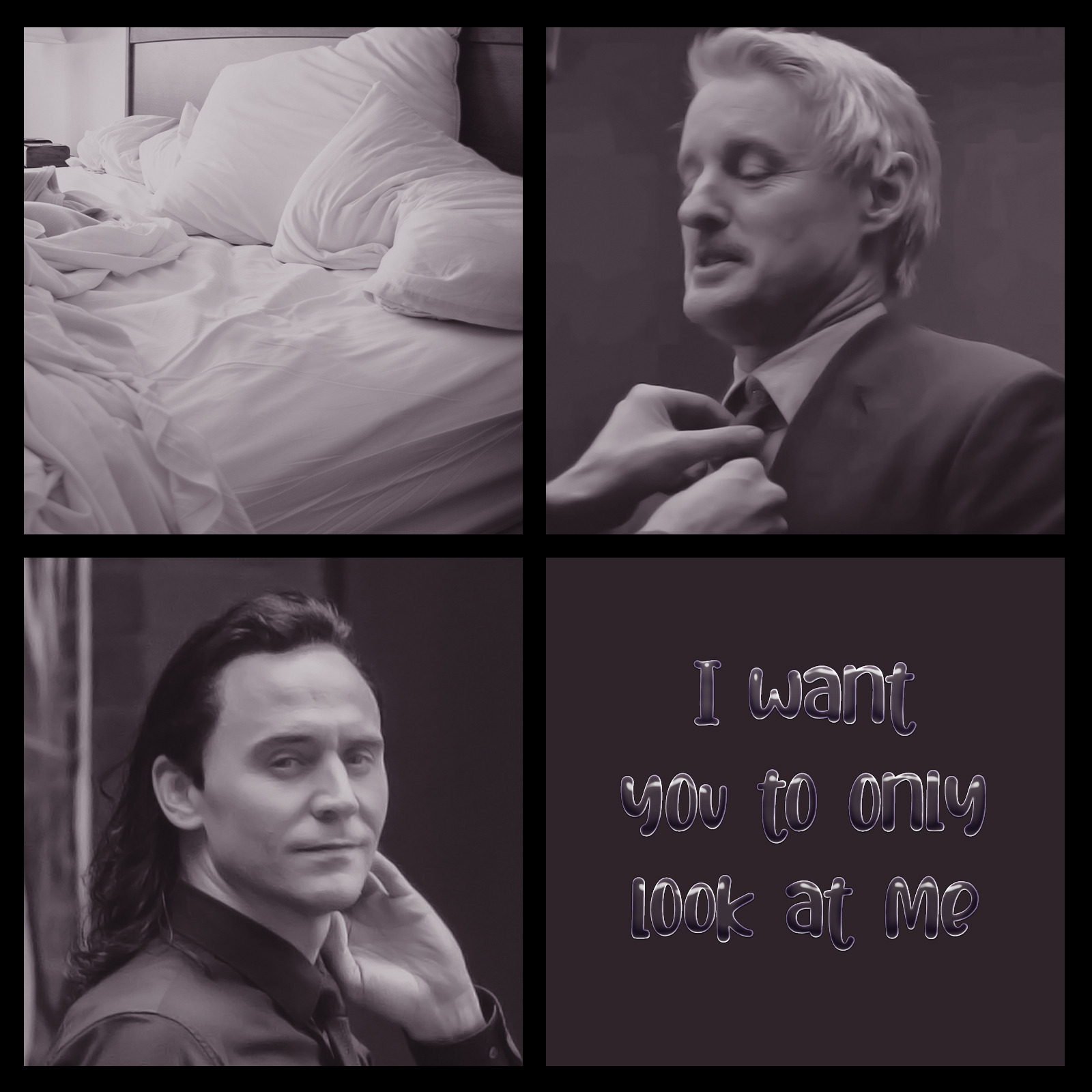 It had all started right at the end of the debriefing at the beginning of the day.

"Is everyone clear on their assignments?"

Mobius' satisfied look slid from the recruits to their supervisor Loki.

But he had to hold back a gasp.

Loki had just had that little gesture again, the thing that turned Mobius completely inside out.

He could not look away from Loki's lips, vaguely aware of the recruits leaving the room.

His gaze left the fascinating lips and when he looked up, he met Loki's eyes.

Holy crap... caught in the act.

Mobius could not prevent his cheeks from blushing slightly.

Loki's eyes shone with that familiar spark of mischief, as his lover smiled cockily.

Loki winked at him, the little minx, then turned away and left the room with an undoubtedly exaggerated swaying step.

That meant a lot of trouble.

A few hours later, as Mobius was half-heartedly trying to focus on his files, someone knocked lightly on his office door.

It was Loki with some files in his hands.

"I have some mission reports for you to sign," the god said as he walked over and sat down in front of him. Then he gave him the files.

Mobius leaned forward to seize them. Loki took advantage of it to touch the hand of Mobius with his fingertips. Surprised, Mobius looked up at Loki who looked away, pretending to be innocent.

Mobius almost snatched the sheets from his hand and, annoyed, began to read the reports as if Loki were not there, but aware of the heat he felt where Loki had brushed his hand.

Loki stood up and slowly walked to the door humming.

Mobius buried his head in his hands. It was not yet noon.

A lot of trouble, indeed.

Two hours later, as Mobius' stomach reminded him that it was well past lunchtime, Loki entered his office again.

"Given the time, I suspected you hadn't eaten yet, I managed to save a salad from the cafeteria," Loki placed the salad in question on his desk and sat down across from him before continuing, "so I'm taking advantage of the end of my lunch break to bring it to you and spend a few minutes with you."

"Thanks, that's thoughtful of you," Mobius said softly, touched by the kind gesture.

Mobius grunted around the mouthful he was now chomping on.

Loki chuckled and they talked about everything and anything while Mobius ate his salad, aware of Loki's gaze, which seemed to follow the movements of his fork with attention.

Having finished his salad, Mobius put the plastic fork back in the bowl and looked up at Loki.

And for the second time that day, he almost gasped.

Damn it! He was doing it again!

Loki was biting his lip again, but this time it was clearly to tease Mobius, because he was staring him right in the eyes.

Mobius coughed to compose himself and looking at his watch he said with a confidence he was far from feeling.

"I think your break is over, right?"

Loki, not at all fooled, stood up slowly, with a small turn of his hand made the empty salad bowl disappear and came very close to Mobius' face. With a glint of desire in his eyes, he whispered softly, "I love the look on your face whenever I do that."

Mobius's eyes widened and he couldn't stop his cheeks from turning slightly red again, as Loki once again walked out of his office with a proud and confident step.

Mobius wondered if he would survive the afternoon.

Yes, a lot of trouble.

Two hours later, Mobius was waiting in front of the elevator, lost in his thoughts, when the little 'ding' of the door opening made him look up. He was surprised to see his lover come out, who exclaimed with joy when he saw him, "Mobius!"

Whatever his annoyance at the way Loki had Mobius wrapped around his little finger today, reading the genuine joy on Loki's face whenever he saw Mobius, made him forget everything. There was something comforting, to see that his own presence made the person he loved so happy, after all.

He smiled softly at her, then entered the elevator, their shoulders deliberately brushing against each other as they crossed.

He turned and watched his lover walk away as the doors were about to close. Suddenly Loki turned around, lifted his hand and the elevator doors remained open. He rushed towards Mobius and stood so close to him that their toes were touching and Mobius could feel the heat emanating from Loki's body.

Loki had a half smile and said softly, putting his hands on Mobius' tie, "I can't let my handsome lover look less handsome because of a poorly made tie knot."

Mobius wanted to lower his head to check Loki's words but Loki didn't let him do it and made him raise his chin while shaking his head.

Mobius also realized in the moment that Loki had just said that he was handsome, and again he could not help but blush.

He wanted to slap himself on the back of the head because he felt like he was reacting like a prepubescent teenager.

Loki, with his eyes fixed on him, tightened the knot perfectly and once finished, slid his hands along the tie until he rested one of them on Mobius' chest.

He leaned forward and whispered in Mobius' ear, totally aware of the shivers he was causing his lover, "I can almost hear your heart racing."

Then he stepped back, until he came out of the elevator, with a flick of his hand he made the doors close, and all that Mobius' stunned eyes could see was the flash of mischief that crossed Loki's.

A look that presaged more trouble to come.

For the past five minutes, Mobius had been listening to the recruits' reports of the day's missions and he was unable to concentrate, because Loki was staring at him with the same gleam in his eye that he had had all day. After all the ways he had teased him, Mobius was only aware of Loki's presence and responded in an automatic way to the recruits.

He reached with difficulty the end of the succession of reports, thanked them for their work and wished them a good evening, all this while feeling Loki's gaze following his every move. But Mobius did everything to avoid crossing this glance.

The irritation of being messed up by his lover was however starting to get to him.

As the last of the recruits left the room, Mobius gathered his papers, determined to ignore Loki.

He moved with a quick step towards the door, but he couldn't help it and exploded, turning back to Loki, "Stop staring at me to distract me!"

Loki walked towards him, with a predatory grin, and bringing his lips close to Mobius', he said quite distinctly, "Oh, I'm not staring at you to distract you. I'm staring at you because no matter how many people are around us, I can only see you, love."

Then, just as Mobius thought Loki was going to kiss him, he stepped back, walked past him and strolled away, humming again.

The next morning, Loki woke up in Mobius' arms wrapped around him, his back against his chest. He gradually became aware that he was a little sore, but really happy and content as he thought back to the previous night.

He had not really intended to make Mobius react in this way.

He had just wanted that for one day, Mobius only thought about him. The result had been beyond his expectations, the night had been incredible.

He felt Mobius wake up behind him and press himself a little more against him.

Mobius turned him around and kissed him gently before pulling back a little, a soft smile on his lips. Then suddenly the expression on his face changed, he now looked almost horrified.

Loki lowered his eyes, following the direction of Mobius' eyes and saw what had shocked his lover. His chest was covered with various hickeys and small bites.

Seeing that Mobius had already begun his guilt trip, Loki raised his head and said, "Mobius, love, you didn't do anything I didn't want to. And honestly, if I wasn't afraid of shocking the younger recruits, I wouldn't mind parading around and proudly displaying this evidence of your passion." He finished with a wink.

Mobius buried his face in Loki's hair and whispered against the skin of his neck, making him shiver.

"You have awakened in me my most feral instincts, sweetheart."

"I enjoyed it, believe me." replied Loki, "I know I reaped what I sowed, but I didn't expect such a torrent of wild passion."

"You think you can taunt me all day and I won't return the favor? You were such a fucking tease. So infuriatingly intoxicating!”

With a skilful hip movement, Mobius turned Loki on his back and straddled him. Then he bent over and it was his turn to make Loki squirm, while he whispered against his ear, aware of the shivers he was causing to his lover, “You have no idea what you do to me, do you? I'll show you Sweetheart. Today you're not going to leave this bed and I’m going to learn everything there is to know about you, everything that makes you tick, all your sensitive little buttons, what makes you blush, what makes you shiver."

He nibbled on Loki's earlobe and released it before pulling back and continuing, his eyes in Loki's wide ones, "You said you only see me, but I, Loki, only see you too, since forever, love, you're the only thing that makes me tick. You. Loki. And even though I loved everything you did yesterday to seduce me, just being you will always be enough for me."

He concluded his passionate speech with an equally passionate kiss and began to put into practice what he had just told him. Learning everything that made Loki tick.

That day, they indeed did not leave their bed.

As always, bear with me as it is not beta'd and english is not my native language I hope you enjoyed it 🥰