With the support of the community, we've raised US$196,329.65 this drive, and added 4786 new members this drive. Thank you so much! (We accept donations year round, so if you haven't donated yet, there's still time to add your support!)

Care of your Human

Their relationship had never been about being looked after.. 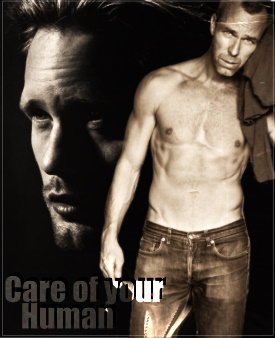 Towelling his hair, Chris walked out of the bathroom in just his jeans, surprised to see Eric sat at the head of the bed reading. He had expected him to have left for the evening – theirs was not the kind of relationship where they hung around after the sex.

“Were you aware that you shouldn’t eat fruit at night because your body can’t process vitamins when it’s dark?”

“This article says that you – humans – shouldn’t eat fruit at night.”

“I hope you don’t mind me saying this, but what the hell Eric?” Eric tossed the magazine aside and gave Chris his full attention, blue gaze piercing in its’ intensity.

“Pam felt that I needed to be made aware that humans cannot live on sex and blood alone – not that you have partaken of my blood, nor I of yours.” Tossing the towel onto a chair, Chris tried to follow what Eric was talking about.

“Ah ah ah – we put the discussion off because you did not like the idea of me being able to track you using your blood. And you had also read a few things about – dreams – that might result of such a sharing.” Chris nodded – he had read of vampires being able to influence decisions if they gave you their blood, but it was the tracking he objected to. He didn’t want Eric finding him when he returned to Beacon Hills – that would be – complicated – to explain to the Pack.

“And this vitamins thing is relevant because?”

“Pam has decided that if I intend to continue the foolishness of bedding a hunter, that I should at least be considerate of your human needs. I would not like you to die like a trapped bird in a cage.”

“I can look after myself thank you,” Chris said, grabbing his bag and dumping it onto the bed before rummaging through it, considering the subject closed – he did not keep coming back to Bon Temps because he wanted someone to look after him. He flinched when Eric suddenly appeared at his side, the curtains swaying in the breeze caused by his swift movements.

“And that is a large part of my attraction to you. Believe me – I would not be consorting with someone that I considered weak.” Eric trailed his finger down Chris’s cheek, continuing down to the throbbing vein in his neck. “I often wonder just how powerful your blood would be, Christopher.”

In an efficient move, Chris pressed the gun against Eric’s belly.

“I wondered if it would ever come to this.” His tone was regretful but resolute.

“Do you really think you could shoot me before I rip out your throat?”

“I think I could make you regret it, yes.” Eric pressed closer, trapping the weapon between them.

“I think I’d rather fuck you than eat you – for now.” Chris found himself thrown onto the bed before he could blink, the gun flying out of his hand as Eric landed on top of him.