The Man in the Lighthouse

She couldn’t see him, at least not at first, but she could feel him. His presence was comforting, gentle and somehow…loving and familiar.

So she started coming back, day after day.

She heard him before she could see him. Distant echoes of “sweetheart” and somehow, impossibly, “Rey.”

This was supposed to be a microfic based on Liv's prompt, but it kind of got away from me and here we are almost 1.4k words later lol.

I hope you enjoy this unconventional story, and please be sure to leave kudos and a comment if you do! 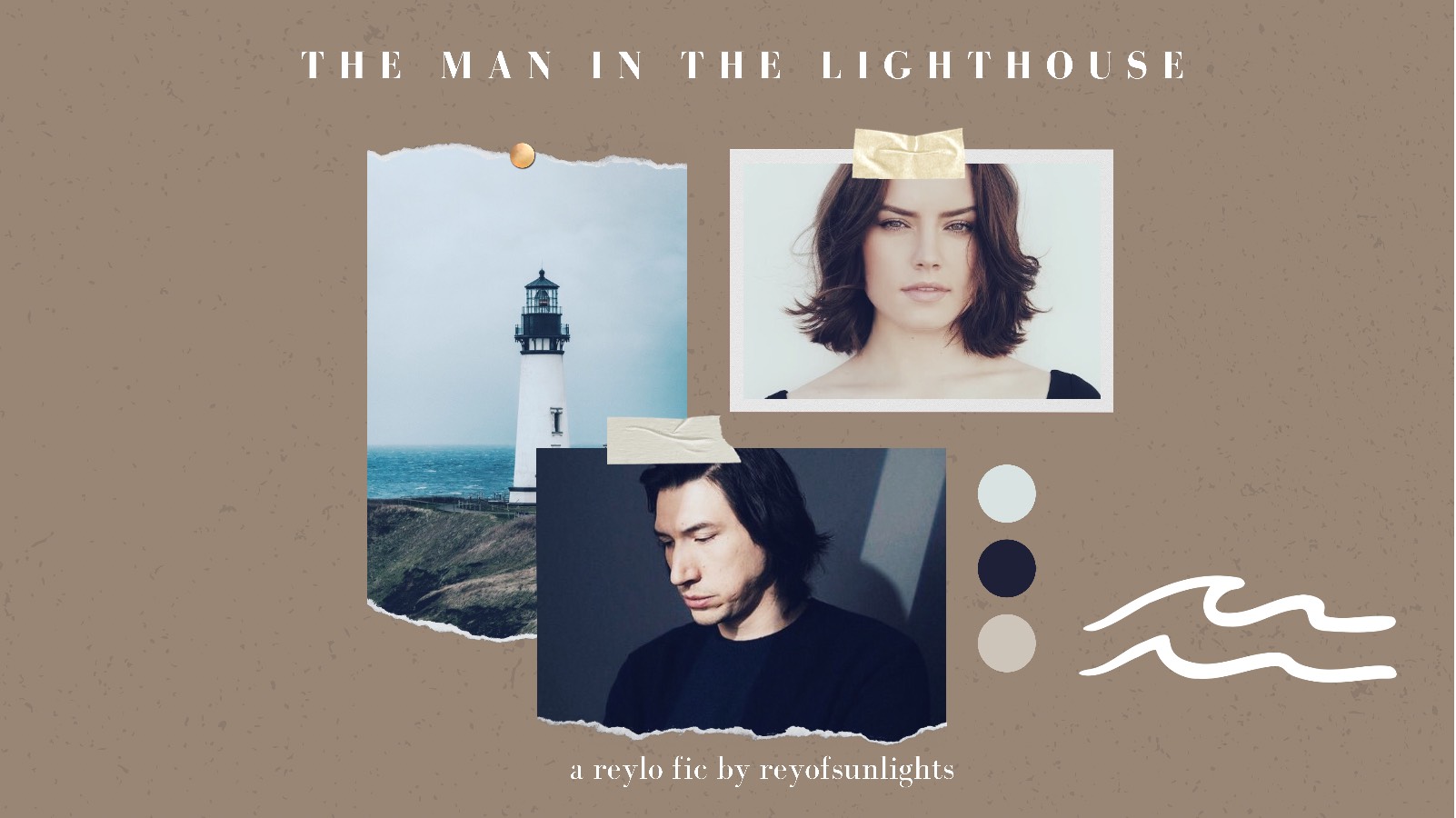 Rey had always admired the old lighthouse by the sea, and one day she decided to explore inside it.

There was a palpable energy inside, some sort of presence that she could sense.

She couldn’t see him, at least not at first, but she could feel him. His presence was comforting, gentle and somehow…loving and familiar.

So she started coming back, day after day.

She heard him before she could see him. Distant echoes of “sweetheart” and somehow, impossibly, “Rey.”

“How do you know my name?” her voice echoed through the old lighthouse, but there was no reply.

She could see the faint outline of him the next day, something tall and wide but fuzzy and blue with indistinct features. She should be frightened, but she only ever feels safe when he’s around.

“It’s you—I know it’s you—but somehow you don’t know me.” He sounds broken when he says this.

“Ben,” he says softly. “I went by another name, too, but…you always called me Ben.”

She smiles sadly. “It’s nice to meet you, Ben. I wish there was some way I could help you.”

“I know, sweetheart,” he says quietly, and then his mangled blue form vanishes.

She can see more of him the next day, make out more of his facial features despite the blue fog around him, his gentle swoop of black hair, his Aquiline nose, his full lips, his soft jawline and broad shoulders.

She can tell that he is handsome.

She wonders why she can see more of him today than she could yesterday.

As if reading her mind, he replies, “I think I get stronger the more I’m around you.”

She smiles. “Then I’ll keep coming back. Everyday.”

He returns her smile. It occurs to her that he has a very nice smile, and it makes her stomach do a flip.

It becomes part of her routine — every day after work, she goes to the old lighthouse and spends time with Ben.

He tells her stories—fairy tales, really, fantastical things about laser swords and space wizards and galaxies far, far, away. But to him, it seems very real; he insists that’s who he is and where he came from. That can’t possibly be true, but she doesn’t have the heart to tell him otherwise.

He asks her about her life, too. She tries to explain engineering to him.

He smiles fondly. “I can see my little scavenger doing that.”

“Scavenger?” she asks, raising an eyebrow.

“Nothing,” he says softly.

Normally he’s so cold she has to bring a jacket with her to the lighthouse even though it’s summer because just being around him sends a chill through her. But lately he’s been feeling warmer and warmer, until one day she doesn’t need a jacket at all.

Seeing Ben quickly becomes the best part of her day.

And in time he starts looking less blue, too; there’s more color in his cheeks, some pink on his lips, flecks of gold in his eyes. She can see his hair is black and his skin is pale.

One day she doesn’t show, and Ben is sad and withdrawn the next time she visits.

“I missed you yesterday. I was worried something had happened to you.”

“Yeah, a date, Ben, like when you go out with someone you find attrac—“

“I know what a date is, Rey,” he snaps irritably.

A startling realization occurs to her. Ben is jealous. But is that any more startling than the fact that despite sitting across the table from a living, breathing, flesh and blood man last night, all she could think about was Ben, and how she’d rather be spending the night with him?

“Okay. Why are you getting all bent out of shape about it, then?”

“I’m not—I’m not getting ‘bent out of shape’, Rey,” he insists, though his tone suggests otherwise. “You’re perfectly free to go out with whomever you like.”

Rey sighs. “I guess I should get going, then.”

“No, Rey, wait, please —“ Ben pleads. And then something impossible happens: he reaches out and grabs her hand to pull her back to him. And he’s solid . He doesn’t just pass through her this time.

They both freeze, staring down at where their hands are clasped.

His connection to this world is still fragile—he’s still a little fuzzy and blue—but he can touch her now. That’s new.

“How is this possible, Ben?” Rey whispers.

“I think—I’m not sure but, my theory is—the more time we spend together, the stronger my connection gets to this world. Like you’re my anchor or something.”

“That makes sense. I was thinking the same thing.”

There’s another long, tense silence, and then Rey takes a hesitant step toward him. She lets go of his hand, but only so she can reach up and touch his face. His skin feels warm and soft. He leans into her touch. She watches as more color comes into his face under her fingertips, little freckles and moles appearing across his pale skin.

“You know,” she says softly, “while I was on that date last night, all I could think about was how I’d rather be spending time with you, Ben.”

“Really?” He looks down at her in utter disbelief at what she’s saying.

She nods. “Yes. I wouldn’t let him kiss me because the only person I want to kiss is you. And I didn’t think that was possible, but now…”

She takes a deep breath, pushes herself up on her tiptoes, and presses her lips to his.

He seems shocked at first, making a surprised sort of noise, but quickly melts into the kiss, pulling her in closer by her waist and letting his tongue slide between her parted lips.

They break apart slowly, eye lips fluttering open as they both blush.

“I missed you so much, sweetheart,” he murmurs.

“What do you mean, Ben? You always say you missed me, but I didn’t know you until I started coming to the lighthouse. Unless—unless the story you told me about the space wizards and the scavenger called Rey you were in love with is true.”

“It’s you, I know it’s you, I’d know you anywhere, sweetheart. You may not know me yet, but I know you’re my Rey. Just a Rey from a different world. But my Rey nonetheless,” he says softly, warm amber eyes searching her face as he gently strokes her cheek.

And though it sounds impossible, could it be any more impossible than a ghost coming back to life and kissing her?

There’s no more blue tinge around him. His features are solid and clear. He’s strong and muscular and beautiful and impossibly real.

She shakes her head, chuckling softly. “This is crazy. It doesn’t make any sense.”

“I know, sweetheart,” he murmurs. He gently presses another kiss to her lips. “I know.”

But his kisses make sense. His gentle touch and adoring gaze make sense. And all she knows is that as crazy as this is, she wants to be with him.

And though on some level she barely knows him, part of her has felt like she’s known him all her life, from the moment she first felt his presence in the lighthouse.

She knows deep in her bones that she was always meant to find him.

“So…where do we go from here?”

“Well…I haven’t seen a beach since I was a little boy, when my parents took me to Scarif. I would love to see what a beach is like on your planet. I’ve heard the waves lapping at the shore ever since I first arrived in this lighthouse, and I’ve been longing to see them for myself.”

Rey smiles, entwining her hand with his. “That sounds perfect.”

And as they leave the lighthouse together, she knows unequivocally that for the first time in her life, she isn't alone.